Objectives: In this retrospective study, we reviewed the use of penetrating keratoplasty with sutureless intrasclerally fixated intraocular lens implantation in a closed anterior chamber in patients with several corneal pathologies and aphakia.

Materials and Methods: The medical records of 6 patients, who underwent the procedure, were reviewed. In the procedure, lamellar scleral tunnels at the 2- and 8-o’clock positions were created with a microvitreoretinal blade, 1.5 mm away from the limbus. Two 27-gauge bent needles were passed, first horizontally, through these tunnels, and then vertically, which allowed them to enter the posterior chamber and to be left in position. Partial thickness trephination was made, and anterior stroma was removed where necessary. An incision was made at the 11-o’clock position, where the trephination was made, which was then extended to both sides for about 6 mm with corneal scissors. From the superior incision, the anterior haptic of a 3-piece intraocular lens was pushed through the needle at the 2-o’clock position, then the posterior haptic was pushed through the needle at the 8-o’clock position, and both haptics were removed through the sclera. Both ends were cauterized and placed into the sclera. Residual stroma was removed, and the donor graft was sutured.

Results: At the last follow-up visit, the mean best-corrected visual acuity was significantly increased. No serious complications were seen, with the exception of increased intraocular pressure in 3 patients.

Conclusions: Penetrating keratoplasty with sutureless intrasclerally fixated intraocular lens implantation can be used safely in patients with aphakia. With this technique, the globe stabilization can be maintained, and the trauma to the donor graft endothelium can be minimized.

Penetrating keratoplasty (PKP) is often indicated in patients with aphakia, and mostly no capsular support is present. In these cases, in addition to PKP, intraocular lens (IOL) implantation is needed. Intraocular lens implantation can be performed with anterior chamber (AC) IOLs, iris-clawed IOLs, or scleral-fixated IOLs.1-6 During the procedure, the “open-sky” technique has mostly been used. This technique has been associated with an increased risk of serious complications, such as hypotony, choroidal detachment, or expulsive hemorrhage.7 A limited number of reports have been published in which the surgeries are performed in a closed AC to reduce these risks to a minimum.8,9

Here, we present PKP with intrasclerally fixated IOL in a closed AC in patients with several different corneal pathologies and aphakia.

Subjects
Our retrospective study included 6 eyes from 6 patients with aphakia who had undergone PKP for various corneal pathologies along with intrasclerally fixated IOL implantation at the ophthalmology clinic of a training and research hospital between September 2017 and March 2018. The study was approved by the local ethics committee and adhered to the tenets of the Declaration of Helsinki. Patients had provided written informed consent before the procedure.

We analyzed and recorded clinical data, including preoperative and postoperative best-corrected visual acuity (BCVA) and intraoperative and postoperative complications, from patient medical records. The IOL power calculation was made with an A-scan ultrasonography device (Aviso Ultrasound Platform, Quantel Medical, Cournon-d'Auvergne, France) using SRK/T formula with a constant keratometry of 43 diopters. Patients with a follow-up period of less than 6 months and no regular follow-ups were excluded from the study.

Surgical technique
Operations were performed under retrobulbar or general anesthesia by a single surgeon. After careful dissection of the conjunctiva at the 2- and 8-o’clock positions, lamellar scleral tunnels of about 1.5 mm in length were created with a microvitreoretinal (MVR) blade, 1.5 mm away from the limbus. Two 27-gauge bent needles were passed through these tunnels, first horizontally and then vertically, which then entered the posterior chamber and were left in position (Figure 1, a-e). Partial thickness trephination for about 60% of the corneal thickness was made at the selected size to include the whole corneal pathology. The anterior stroma was removed, where necessary, to enhance the visualization. An AC maintainer was inserted from the paracentesis at the inferotemporal quadrant; thus, allowing hypotony to be avoided. An incision was made at the 11-o’clock position with an MVR blade, where the trephination was made (Figure 1f). This incision was extended to both sides for about 6 mm with corneal scissors or the MVR blade. Anterior vitrectomy was performed, where necessary.

Patients were prescribed corticosteroids and antibiotic drops every 2 hours for 1 week; corti­costeroid drops were then tapered over 12 months. Preservative-free artificial tears were used hourly. All patients were followed at first day, first week, and first month postoperatively and then monthly afterward. Best-corrected visual acuity (logMAR), biomicroscopic and fundoscopic examinations, and intraocular pressure (IOP) measurements with Goldmann applanation tonometry were acquired and recorded at every follow-up visit.

Of the 6 patients, 4 (67%) were men and 2 (33%) were women. The mean age was 55.2 ± 14.4 years (range, 36-70 y). Two patients had aphakic bullous keratopathy with anterior stromal opacity, 2 had corneal leukoma due to previous trauma, 1 had graft failure secondary to a previous therapeutic repeat keratoplasty and IOL extraction due to the graft abscess, and 1 had bullous keratopathy secondary to an AC IOL. In the patient with AC IOL, IOL extraction was performed from the incision at the superior quadrant after the needles were placed, with the IOL implantation performed as explained in Materials and Methods. At the last follow-up visit, the mean BCVA measurements had significantly increased (P = .019). However, in 1 patient with glaucomatous optic atrophy, no improvement in vision was achieved. In 3 patients, IOP was found to be higher after surgery. Two of these patients could be treated with anti-glaucomatous medication. However, in the other patient, high IOP could not be controlled medically; therefore, an Ahmed glaucoma valve implantation was performed. No other complications were seen in any of the cases. Patient data are shown in Table 1.

There have been many reports on PKP with scleral-fixated IOLs.1,4-6,8,9 However, most of these reports use the “open-sky” technique in PKP, which is associated with increased risk of hypotony, choroidal detachment, or expulsive hemorrhage.1,4-6 In contrast, Al-Qahtani and colleagues8 described a closed AC technique, in which 10.0 propylene sutures were driven through the sclera at the inferior and superior quadrants to the opposite directions to secure the IOL. A limitation of this technique, as described by the group,8 would be if the corneal opacity obscures the visualization of the suture, which would mean that this technique could not be used. However, in the technique described in our study, needle openings were seen from the main incision if they were moved forward enough, and the haptics of the IOL can be easily driven to the needle.

In another technique, described by Can and colleagues,9 PKP was performed in a closed AC, with the donor graft sutured onto the host and the IOL fixated to the sclera before the removal of the pathologic corneal tissue. Although the group reported that there was no decrease in endothelial cell count during follow-up, endothelial trauma remains a possible limitation of this technique. However, with our technique, the IOL was secured with the host cornea still in place, before the donor graft was sutured.

In the implantation of IOL, we used the technique that was initially described by Yamane and colleagues.10 In this technique, two 27-gauge needles are passed through the sclera with an angle of 180° from each other, first horizontally, creating a lamellar tunnel, and then vertically, entering the posterior chamber. The haptics of the IOL are then passed into these 27-gauge needles, respectively, and extracted through the sclera. After the ends of the haptics are cauterized, forming a knob, these ends are buried into the scleral tunnel. This technique has advantages over transscleral suturing, which can cause suture-induced inflammation, suture exposure, degradation, and delayed IOL dislocation due to the broken sutures.9 Especially for cases where keratoplasty is combined, inflammation must be avoided, as it can be an important cause of graft rejection. We did not observe this in our patients during follow-up. Moreover, this technique has an advantage of being simpler and faster than techniques in which the scleral flap is created.

The retrospective nature and the small number of patients are the main limitations of our study. In addition, endothelial cell count measurements could not be performed because of the lack of the equipment in our department.

With the technique described here, globe stabilization can be maintained and trauma to the donor graft endothelium can be minimized. In addition, because no sutures or flaps are used in the implantation of IOL, no complications related to these conditions were encountered.

From the 1Department of Ophthalmology, Adana City Training and Research Hospital, Adana, Turkey
Acknowledgements: The authors have no conflicts of interest with this submission to declare. The research presented here did not receive any specific grants from funding agencies in the public, commercial, or not-for-profit sectors.
Corresponding author: Burcu Kasım, Adana City Training and Research Hospital, Yüreğir 01220, Adana, Turkey
Phone: +90 322 355 90 00
E-mail: burcukasim@gmail.com 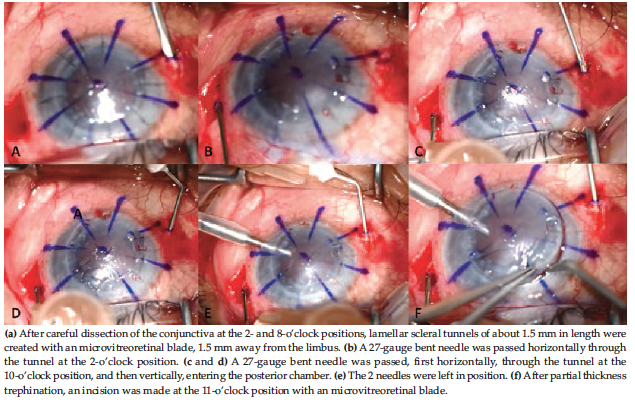 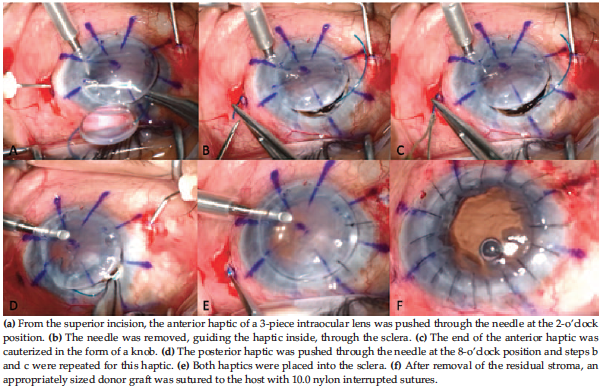