Materials and Methods: We enrolled 247 patients [159 (64%) male and 88 (36%) female] who underwent kidney transplant between 2009 and 2018. All demographic and laboratory parameters were retrospectively analyzed as possible factors associated with posttransplant erythrocytosis.

Calcium is a universal signaling molecule involved in regulating the cell cycle, and calcium-dependent signaling is used during the differentiation of red blood cells from precursor cells.7 Recently, it has been suggested that calcium may contribute to erythro­poiesis, and PTE shown to be 2 to 3 times more frequent in KTRs who have higher serum calcium levels than in normocalcemic patients.1,8 On the other hand, the most important cause of hypercalcemia after kidney transplant is persistent hyperparathyroidism, and it is known that elevated parathyroid level could lead to anemia by bone marrow fibrosis.9 However, relationships among hypercalcemia, hyperparathyroidism, and PTE have not been well elucidated.

With these considerations, our study aimed to determine the frequency of PTE and to define whether there were associations among hypercal­cemia, persistent hyperparathyroidism, and PTE. Other possible risk factors, including biologic sex, age, and dialysis modality before transplant for PTE development, were also investigated.

Data were collected retrospectively on consecutive patients undergoing kidney transplant from 2009 to 2018 in our Nephrology and Transplantation Department (Gazi University Medical School, Ankara, Turkey). Kidney transplant recipients older than >18 years of age were included in the study. Of 247 included patients, 61 (25%) were deceased-donor KTRs, and 186 (75%) were living related-donor KTRs. All patients were treated with standard triple immunosuppressive therapy consisting of gluco­corticoids, a calcineurin inhibitor (tacrolimus or cyclosporine), and an antimetabolite (mycophenolate mofetil or azathioprine). All patients who had vitamin D levels below 30 ng/mL according to the Kidney Disease: Improving Global Outcomes 2009 practice guidelines on monitoring and treatment of KTRs10 received vitamin D supplementation.

Posttransplant erythrocytosis was defined accor­ding to the World Health Organization (WHO) 2015 definition as follows: hemoglobin level higher than 16.5 g/dL for men and higher than 16 g/dL for women or hematocrit higher than 49% in men and 48% in the women for at least 6 months.11 Other causes of PTE were excluded by appropriate clinical and laboratory investigations, including native and allograft renal Doppler ultrasonography, urine cytology, and tests for chronic obstructive pulmonary disease. The study protocol conformed to ethical guidelines of the 1975 Declaration of Helsinki, and all participants gave written informed consent and willingness to participate.

Statistical analyses
Analyses were performed with SPSS software for Windows (SPSS: An IBM Company, version 20.0, IBM Corporation, Armonk, NY, USA). Data distribution was determined by using the Kolmogorov-Smirnov test. Homogeneity of variables was determined by using one-way analyses of variance. Symmetrically distributed variables in the text and tables are shown as means ± standard deviation. If the distribution was heterogeneous, variables are shown as median (interquartile range). Categorical variables are expressed as a percentage. We used the t test or the Mann-Whitney U test to compare continuous variables according to the data distribution. Chi-square test was used to compare categorical variables. Logistic regression was used to identify variables that predict PTE development. P values < .05 were considered to indicate statistical significance.

Posttransplant erythrocytosis usually occurs 8 to 24 months after transplant, and it spontaneously remits in almost 25% of patients within 2 years without treatment.1,3 The estimated frequency varies between 8% and 26%.1 In our patients, rate of occurrence was 24%, with median appearance time of 16 months. We defined PTE by WHO criteria, which were revised in 2015. This caused a higher rate of PTE detection, with the limit of hemoglobin level for PTE diagnosis reduced to 16.5 g/dL for men and 16 g/dL for women.11

Previous experiments have shown that calcium is an essential molecule in the modulation of erythropoiesis.16 Although the main stimulating factor for erythropoiesis is erythropoietin, calcium has been suggested to be a secondary messenger for erythropoietin signal transduction.16 Therefore, hypercalcemia may speculate as a risk factor for PTE development. In our results, calcium was shown to be a risk factor for PTE development, but its significance was eliminated in multivariate analyses. However, our study is observational, and we had to make some attempts to control the calcium levels of our patients. These interventions may have caused the real effects of calcium levels to be alleviated.

There are 2 important studies in the literature investigating the relationship between hypercalcemia and PTE development. In these studies, the investigators suggested propositions similar to our results that hypercalcemia may be a predictor for PTE development.1,8 Kurella and associates demonstrated that calcium levels higher than 10.2 mg/dL were associated with a greater than 2-fold increased odds of PTE.1 On the other hand, they did not find an association between iPTH and PTE in their study. However, the results of their study are insufficient to assess the effect of iPTH on PTE development. This was because the number of patients undergoing iPTH measurement was low (n = 18 patients) and the cross-sectional measurement of iPTH made it difficult to evaluate the long-term effects. Our results, even in multivariate analyses, support that iPTH values higher than > 65 pg/mL may be an important risk factor for PTE development. It is known that secondary hyperparathyroidism is typically asso­ciated with erythropoietin resistance and anemia in patients on dialyses.17 On the other hand, reports have indicated that hyperparathyroidism may cause erythrocytosis in patients without kidney disease, and this condition is improved with parathyroidectomy.18-20 Recent reports have eluci­dated functional relationships between major calcium-regulating hormones, including iPTH, and regulation of hematopoiesis. These relationships suggest possible biologic mechanisms linking erythrocytosis and hyperparathyroidism.20,21 Although the exact mechanisms of the associations between hyperparathyroidism and erythrocytosis remain unclear, we can speculate accordance with these findings that iPTH in nonuremic milieu may be stimulating calcium influx into bone and kidney cells and the proliferation of erythroid precursors.

The most important limitation of our study is its retrospective design. Our results only suggest but do not prove causality. Further studies are needed to clarify the mechanisms by which high iPTH levels, preemptive kidney transplant, and peritoneal dialysis modality lead to an increase in erythroid proliferation. In conclusion, hypercalcemia and high levels of iPTH could precipitate PTE development. In addition, preserved RRF may be associated with increased endogenous erythropoietin, and this could lead to PTE development. 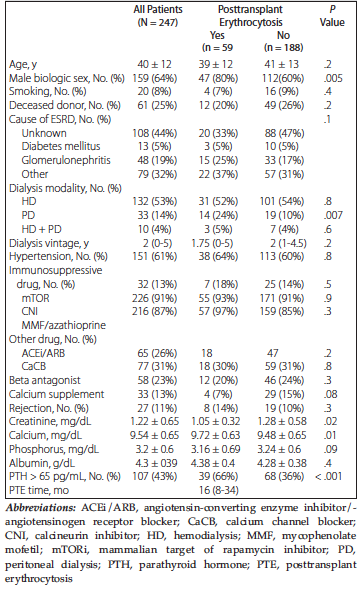 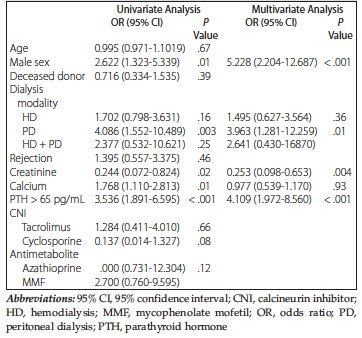 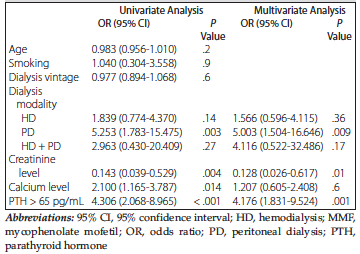