Materials and Methods: Data from 3 patients who were treated using this technique were collected and evaluated with regard to surgical technique and outcomes.

Results: All patients were alive without vascular complications after a mean follow-up of 67 months. The applied surgical technique was similar except with regard to vena cava preservation.

Conclusions: During the natural course of the disease, venous collaterals form as chronic thrombosis extends into the vena cava. The vena cava can be safely resected in these patients to facilitate hepatectomy through dense adhesions, which is another common clinical problem in this disease. Consequently, venous outflow reconstruction to the right atrium creates the feasible opportunity of draining the graft liver without having to replace the vena cava.

Living-donor liver transplant (LDLT) for Budd-Chiari syndrome (BCS) has its unique challenges, specifically with regard to venous outflow reconstruction. Unlike whole liver grafts from deceased donors, grafts from living donors lack vena cava (VC) and usually occluded and/or stenotic VC of the recipients further complicates the procedure. A number of innovative surgical techniques have been employed to overcome this specific problem, including cavoplasty, graft replacement of VC, anastomosis to supradiaphragmatic VC, and even direct surgery to the right atrium.1-12 Among these techniques, reconstruction of the hepatic venous outflow to the right atrium itself is extremely rare in the literature since it is reserved as a last resort for the treatment of this technically challenging disease. We have previously reported a case of BCS who underwent LDLT with a direct anastomosis of the graft’s right hepatic vein to the right atrium.1 Less than 10 cases with venous outflow reconstruction draining directly into the right atrium have been reported so far in the literature.1,7,11,13,14

Patients
Our original case (Patient 1) was reported in 2009 in a then 29-year-old male patient who had BCS for over 4 years. The native VC of this patient had been resected, and the hepatic vein of liver graft was successfully drained directly into the right atrium without using any conduit.1

Patient 2, a 16-year-old male patient, was diagnosed with primary BCS 2 years before liver transplant. Hematologic tests for prothrombotic conditions were negative. The viral serologies for hepatitis were negative, and the patient did not have a history of chronic illness or abdominal surgery. He had been hospitalized for the previous 4 months as his condition had gradually deteriorated due to massive ascites requiring frequent paracenteses and grade 2 encephalopathy. His Child-Pugh score was 11 and his Model for End-Stage Liver Disease (MELD) score was 24. Preoperative imaging revealed a thrombus in the inferior VC, extending into the right atrium, and the retrohepatic portion of the inferior VC could not be visualized (Figure 1).

Patient 3, a 36-year-old male patient, was under follow-up for chronic hepatitis B infection and concurrent BCS. Tests for prothrombotic conditions were also negative for this patient. He was referred for consideration for liver transplant with findings of decompensation, which was mainly refractory ascites. His Child-Pugh score was 10, and his MELD score was 17.

Anticoagulation regimens were similar for all patients. Warfarin was the drug of choice, which was started in the immediate postoperative period as soon as the international normalization ratio dropped below 2. Maintaining dose was calibrated to target the international normalization ratio at between 2 and 2.5. Salicylic acid was added to the regimen at 100 mg/day after platelet count had increased above 100 000/mL of blood.

Table 1 summarizes these 2 recent cases as well as the previously published case.1

Surgical technique
The surgical approach was similar for all patients. After dissection of the main ligaments of the liver with electrocautery, the hepatic hilum was prepared and the structures within (hepatic artery, portal vein, and the common bile duct) were isolated and encircled as in regular surgical cases. However, the hepatic inflow was occluded with vascular clamps to decrease the hepatic congestion, which ultimately facilitates mobilization of the liver by reducing the organ’s volume. This maneuver also allows easier dissection of dense adhesions involving the retroperitoneal space and inferior VC, which is another technical challenge in this particular disease. The inferior VC was encircled from proximal and distal portions, and the recipient hepatectomy was finalized using scissors to preserve the VC in a regular fashion. After the clamps on the inferior VC were released, no bleeding was observed from the totally fibrotic and thrombosed VC in Patients 2 and 3.

The diaphragm surrounding the VC was divided, and neither the supradiaphragmatic nor the infra­diaphragmatic portion of the VC was suitable for placing an anastomosis due to the dense fibrotic thrombus. Therefore, the right atrium was chosen for venous drainage of the liver as planned pre­operatively. The pericardium was accessed through the abdomen via a wide pericardial window by cutting the diaphragm with electrocautery. The supradiaphragmatic part of the VC within the pericardium was encircled to facilitate the mobilization of the right atrium.

On the back table, the right lobe grafts were prepared, and an iliac vein conduit from a deceased donor was anastomosed to facilitate the venous drainage to the right atrium. This conduit allows performing a safer anastomosis without tension by traversing the distance between the right lobe and the right atrium. In Patient 2, the conduit was a Y-shaped external and internal iliac vein junction, as the right lobe graft had both right and middle hepatic veins. In Patient 3, the conduit was a 2- to 3-cm straight external iliac vein. The inferolateral 1 cm of the right atrium was held with a Satinsky clamp, and the patient was checked for possible arrhythmias. The anterior wall of the clamped portion of the right atrium was then opened wide enough to match the size of the lumen of the conduit. The posterior row of the anastomosis and then the anterior row were completed using continuous 5/0 polypropylene sutures. Figure 2 shows the atrial anastomoses after completion. After anastomosis of the portal vein, the graft was reperfused, and reconstruction of the hepatic artery and bile ducts was completed.

Patients 2 and 3 were discharged uneventfully on day 16 and day 37. Table 1 details the patient follow-up and complications.

The totally thrombosed VC was left in its place in Patient 2, as it provided cushion-like support for the graft in the large space remaining from the congested Budd-Chiari liver. However, in Patient 3, the VC was resected to have a better positioning of the vascular anastomosis. Figure 3 shows the conduit and the patent anastomosis in the first postoperative month.

Although it is rare, total thrombosis of the VC is the most challenging aspect of liver transplant for BCS. When BCS becomes chronic, this obstruction eventually results in the formation of several collateral vasculatures within the liver and along the VC.7,15 The left renal hemiazygos pathway, the vertebra-lumbar hemiazygos pathway, the anterior abdominal wall, and inferior phrenic collaterals are the main drainage pathways in the body that help to bypass the obstructed portion of VC. These pathways become more prominent as the disease progresses; in some cases, these pathways can be sufficient enough to drain the whole venous flow below the liver.

The venous drainage of the liver is crucial for the outcome of the transplanted liver. However, the site of the hepatic venous outflow reconstruction does not necessarily have to be into the VC. Moreover, there is also no need to drain chronically obstructed VC as drainages of the lower extremities and kidneys are already established through the aforementioned collateral systems. Under these conditions, it is technically safer and more feasible to create a direct anastomosis between the right atrium and the graft hepatic vein instead of replacing the thrombosed VC. Indeed, replacing an already dysfunctional VC and chasing the chronic thrombus might bear additional unnecessary fatal risks to the patient.

In Patients 2 and 3, there was no blood flow in the VC even after removal of the hemostatic clamps. Although some clinicians prefer to reconstruct VC to maintain venous flow, the necessity of reconstructing an already dysfunctional VC is questionable.4,5,9-11,13 On the other hand, reports on patients with BCS who receive LDLTs without replacement of VC are increasing.1,2,7,8,12-14 One may argue that replacing the VC may be necessary to anastomose multiple veins, but this can also be overcome by utilization of vascular conduits to create a single orifice for hepatic venous outflow.

For patients with BCS and extensive caval thrombosis that do not allow hepatic venous anastomosis, the right atrium is a safe and feasible option for venous outflow reconstruction. The right atrium is easily accessible through the abdomen during a liver transplant procedure without additional incision or the need for extracorporeal circulation. Although this technique might be rarely applied, it should be in the armamentarium of liver transplant surgeons.

From the 1Izmir University of Economics, Faculty of Medicine, and the 2Izmir Kent Hospital, Department of Liver Transplantation, Izmir, Turkey
Acknowledgements: The authors have no conflicts of interest to declare, and no funding was received for this work.
Corresponding author: Can A. Karaca, Izmir Ekonomi Universitesi, Sakarya Cd. No:156, Ofis A116, 35330 Balcova/Izmir, Turkiye
E-mail: can.karaca@ieu.edu.tr 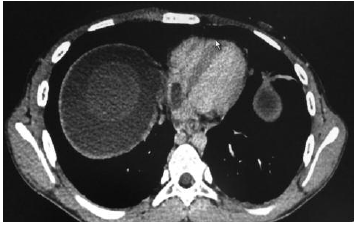 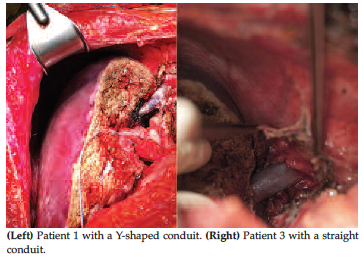 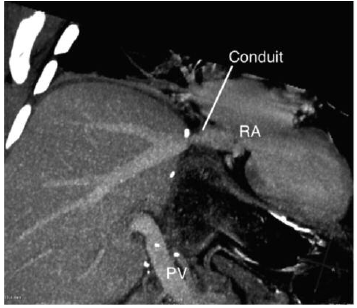