Materials and Methods: This cross-sectional study included 78 kidney transplant recipients > 18 years old and at least 6 months posttransplant. In our center, unrelated living-donor kidney transplants are not performed. Patients with parathyroid adenoma or parathyroidectomy history were excluded. Lumbar and femoral neck bone mineral densities and T and Z scores were obtained by dual-energy X-ray absorptiometry; results were used to divide patients into osteoporotic and nonosteoporotic groups. Serum sclerostin was measured by enzyme-linked immunosorbent assay.

Conclusions: Sclerostin levels were low in our osteoporotic patients; therefore, sclerostin may not be a contributing factor to osteoporosis development. Because sclerostin is an osteocyte-derived peptide, its serum levels only reflect total osteocyte number and bone mass.

Sclerostin is a 213-amino acid glycoprotein, which is encoded by the SOST gene and released primarily from osteocytes.3 Sclerosteosis and van Buchem disease are characterized by the gradual development of hyperostosis in patients with a genetic deficiency of sclerostin due to SOST gene mutations.4,5 Sclerostin inhibits the Wnt signaling pathway (which promotes terminal maturation of osteoblasts and prevents their apoptosis) by binding to LRP5/6. Thus, this results in inadequate bone formation.6 For this reason, the relationship between sclerostin and osteoporosis has been the subject of studies in the general osteoporosis population and in CKD patients.7-9 There are few studies examining sclerostin levels after kidney transplant, but no study exists that has investigated possible relationship between sclerostin and osteoporosis in kidney transplant recipients.10-12 The aim of our study was to investigate the relationship between osteoporosis and serum sclerostin levels in kidney transplant recipients.

Ethical approval
This study was approved by the Local Ethics Committee of Kahramanmaras Sutcu Imam University (Decision No: 04 and Decision Date: 17/05/2017) and were in accordance with the 1964 Helsinki Declaration and its later amendments. Informed consent was obtained from all participants included in the study.

Study population
This cross-sectional study was conducted between June 1 and October 1, 2017 in Kahramanmaras Sutcu Imam University Medical Faculty Hospital (Kahramanmaras, Turkey). Over the study period, 94 patients over 18 years of age had undergone renal transplant and were at least 6 months posttransplant. In our transplant center, we do not perform kidney transplant procedures from living unrelated kidney donors, and only living related donations and deceased donations are used for transplant.

The greatest bone loss related to intense corticosteroid use after kidney transplant occurs during the first 6 months, and bone pathologies such as hyperparathyroid or adynamic bone diseases related to CKD pretransplant are possible confounding factors. To reduce the effects of these factors on bone health and to reveal a natural relationship between osteoporosis and sclerostin levels, patients with these factors within the first 6 months after kidney transplant were excluded from our study. We also excluded those with parathyroid adenoma, those who had undergone parathy­roidectomy surgery, and those who received vitamin D, cinecalcet, or antiosteoporotic therapy. Therefore, of 94 patients, 12 patients with impaired renal function posttransplant who developed CKD and with estimated glomerular filtration rate (eGFR) of less than 40 mL/min/1.73 m2 were excluded from our study to exclude the effects of CKD mineral bone disorder. Four patients who had intact parathyroid hormone (iPTH) > 300 pg/mL were also excluded from the study due to a possible unrecognized parathyroid adenoma. In total, 78 patients met the inclusion criteria.

Causes of CKD, elapsed time after kidney transplant, age, sex, immunosuppressive drugs that were used, presence of diabetes and hypertension, smoking status, and other demographic data were obtained from the database at our center.

We used total usage duration and average daily dose of immunosuppressive drugs to calculate the total dose used after renal transplant for each drug.

Bone density measurement and diagnosis of osteoporosis
Bone mineral density (BMD) of patients was measured from lumbar spine 1-4 and left femoral neck by the dual-energy X-ray absorptiometry (DEXA) method using the Hologic QDR 4500 fan beam scanner device (Bedford, MA, USA). The mean BMDs, T scores, and Z scores of the lumbar spine and femoral neck were obtained. Patients were divided into 2 groups: those with and those without osteoporosis.

The diagnosis of osteoporosis was made accor­ding to the criteria of the World Health Organization and the International Society for Clinical Densitometry.13,14 According to these criteria, postmenopausal women and men older than 50 years with T-score result of -2.5 or lower according to DEXA are classified as having osteoporosis, and those with a T-score result greater than -2.5 are classified as nonosteoporotic. However, T scores cannot be used to define osteoporosis in premenopausal women and men younger than 50 years of age. These individuals are defined as “below the expected range for age” when they have a Z score of -2.0 or lower according to DEXA results.14 Therefore, in our study, for renal transplant recipients who were either premenopausal women or men younger than 50 years of age, we decided to include them in our osteoporosis group if they had a Z score of -2.0 or lower, whereas those with a Z score of greater than -2.0 were included in the nonos­teoporosis group.

Laboratory values and serum sclerostin measurements
Blood urea nitrogen, creatinine, calcium, phosphorus, albumin, potassium, alkaline phosphatase (ALP), and iPTH levels were measured in blood samples taken after an 8-hour fast in the morning using the Advia 1800 Fully Automated Clinical Chemistry Analyzer (Bayer, Berlin, Germany). Levels of 25-hydroxyvitamin D2 [25(OH)D2] were measured in blood samples taken into EDTA tubes using the ultra-high-performance liquid chromatography instrument (Thermo Fisher Scientific Inc., Rockford, IL, USA). Blood samples (2 mL) taken simultaneously were centrifuged at 5000 revolutions/minute for 3 minutes to be used for the measurement of serum sclerostin level. The separated serum was stored at -80°C. After all samples were collected, they were defrosted simultaneously and were studied using the human SOST (sclerostin) enzyme-linked immunosorbent assay kit (Elabscience, Houston, TX, USA) on an enzyme-linked immunosorbent assay device (Thermo Fisher Scientific). The intra- and interassay coefficient variability of the kit was 5.32, and the average recovery was 91%. The eGFR value was calculated for each patient using the Modification of Diet in Renal Disease-4 equation. Blood sampling for serum sclerostin level, 25(OH)D2, and other laboratory measurements were taken between 8:00 and 9:00 AM in the morning of the day when bone measurements were made.

Statistical analyses
Categorical data obtained by counting are expressed as number and percent of patients. Continuous variables obtained by measurement are expressed as means and standard deviation. Statistical evaluation was performed using the SPSS software package (SPSS 16.0, SPSS Inc., Chicago, IL, USA). For comparison of patients with and without osteoporosis, the chi-square test was used for categorical data. Although we used t tests to compare noncategorical data if parameters were normally distributed, the Mann-Whitney U test was used to compare noncategorical data if parameters were not normally distributed. Correlations between sclerostin level, BMD, T score, Z score, and other parameters were assessed by Pearson and Spearman correlation analyses and partial correlation analyses. Multiple regression analysis was performed by the enter method to assess factors affecting the lumbar and hip BMD scores. P < .05 was considered statistically significant.

In multiple regression analysis, when the factors affecting lumbar and femoral neck BMD were examined, we observed that serum sclerostin level, age, and total corticosteroid dose did not affect lumbar or femoral neck T scores or BMD (Table 4). Only serum iPTH levels had a negative effect on lumbar BMD (P = .02 and 95% confidence interval, -0.002 to 0.000) and T score (P = .036 and 95% confidence interval, -0.13 to 0.000) (Table 4 and Figure 2).

Sclerostin is a peptide that is released mainly from osteocytes; it inhibits osteoblast maturation and leads to osteoblast apoptosis through the Wnt/β-catenin pathway. Because of this feature, we may expect that sclerostin contributes to osteoporosis by reducing bone formation, and thus it should be higher in patients with osteoporosis. Contrary to this expectation, we observed that serum sclerostin levels were lower in renal transplant patients with osteoporosis than in renal transplant patients without osteoporosis. This result is consistent with the studies summarized above. When the possible causative factors were examined, the parameters sclerostin, age, total corticosteroid dose, time elapsed after renal transplant, and eGFR had no effect on lumbar BMD. Only iPTH levels were found to have a negative effect on lumbar BMD. In light of previous results and our findings, we suggest that sclerostin levels are a reflection of low bone mass due to osteoporosis rather than a contributing factor to the development of osteoporosis. Because sclerostin is released primarily from osteocytes, serum sclerostin levels may be an indirect indicator of the total number of osteocytes.

During our literature search, we did not see any other study showing that sclerostin levels are lower in renal transplant patients with osteoporosis. However, our study had several limitations. First, this was a cross-sectional study conducted with a limited number of patients. Serum sclerostin levels were measured only once for each patient, which may have lead to some bias resulting from measurement errors. Most of our patients were relatively younger, and 70% were male. The definition of osteoporosis is clear in postmenopausal women and men older than 50 years, but it is not clear in premenopausal women and men younger than 50 years. Because of this uncertainty, we used a Z score of -2.0 or lower according to the International Society for Clinical Densitometry recommendation for the definition of osteoporosis in premenopausal women and men younger than 50 years in our study. This is a controversial issue, and different class­ifications can lead to changes in the results. Although we did not have any patients with known osteoporotic fractures, the fact that we did not screen our patients for osteoporotic fractures radiographically could be another limitation to this study. On the other hand, it is known that lumbar DEXA measurements are adversely affected by vascular calcification and lumbar degenerative changes, which can lead to errors in the diagnosis of osteoporosis. Despite these limitations, a DEXA measurement remains the most commonly used method for diagnosing osteoporosis. In studies conducted in recent years, DEXA measurements have been shown to predict fracture risk in kidney transplant patients and patients with CKD, with KDIGO guidelines also undergoing changes in the CKD-mineral bone disorder guideline for 2017.31 Although patients who had at least 6 months of follow-up after renal transplant were included in our study to reduce the effect of pretransplant bone pathologies, posttransplant bone pathologies are also quite complicated and can continue for several years after transplant.32 The most common posttransplant bone pathology is adynamic bone disease,33 which may affect serum sclerostin levels.

We observed that serum sclerostin levels were lower in kidney transplant patients with osteoporosis. However, this result was not supported by adequate preliminary data, and further studies are needed on this subject. 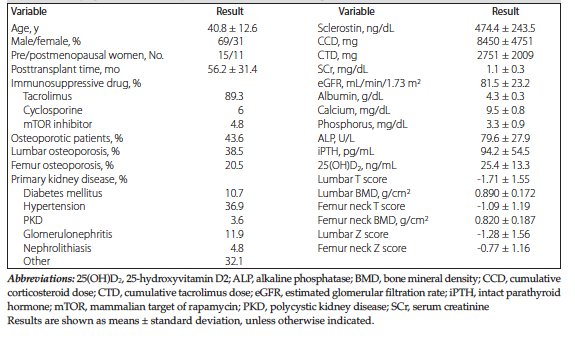 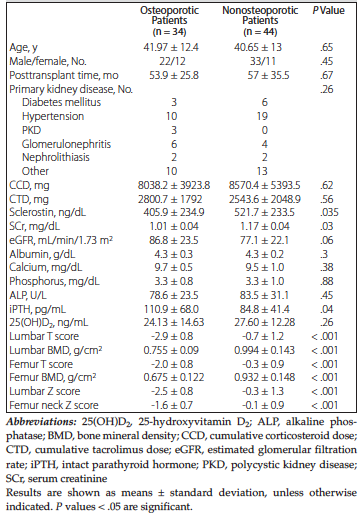 Table 2. Comparisons of Patients With and Without Osteoporosis 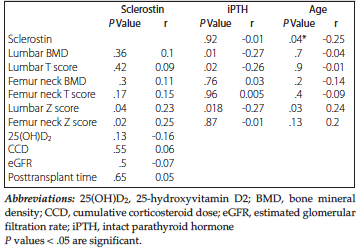 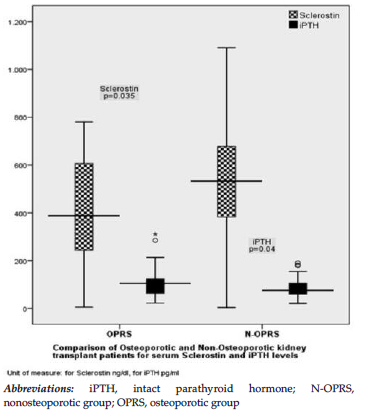 Figure 1. Sclerostin and Intact Parathyroid Hormone Levels of Patients With and Without Osteoporosis 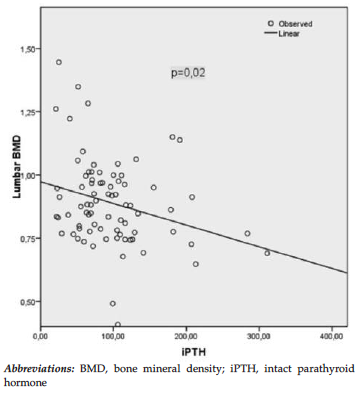