Objectives: Renal transplant improves echocardio­graphic markers of systolic and diastolic heart functions. The aim of this study was to evaluate the gradual changes in left and right ventricle functions in children and young adults before and after renal transplant.

Conclusions: The systolic and diastolic dysfunctions of both ventricles appear to be highly prevalent in pediatric renal transplant recipients, especially soon after transplant, and were shown to usually decrease with time. Improvements in right ventricle dysfunction are slower, even in optimally treated posttransplant patients.

The risk of cardiovascular complications is one of the most important risks following pediatric kidney transplant (KT), and cardiovascular mortality is 100-fold higher in pediatric KT recipients than that show in an age-matched pediatric population.1,2 Changes in left ventricular geometry and function identified by echocardiography are common in patients with chronic kidney disease and have been recognized as predictors of outcome.3 Kidney transplant can improve overt heart abnormalities (preload and wall thickness), as well as echocardiographic markers of systolic and diastolic heart functions.4 In this study, our aim was to evaluate the gradual changes in left ventricle (LV) and right ventricle (RV) functions after KT in children and young adults using conventional and tissue Doppler echocar­diography.

Patients
Thirty children with chronic kidney disease who received KT from 2011 to 2017 were included in the study. Patients who had moderate to severe valve insufficiency, pericardial effusion, or congenital heart disease were excluded from the study. All patients were evaluated before and after transplant at regular intervals. Written informed consent was obtained from parents of study patients. The study protocol was approved by the Başkent University Committee for Research Ethics and carried out in accordance with the Declaration of Helsinki.

Echocardiography
Echocardiography was performed using the General Electric Vivid S5 (GE Health Medical, Horten, Norway) ultrasonographic system with a 3Sc-RS probe. Measurements of cardiac systolic and diastolic functions were performed via conventional and tissue Doppler echocardiography. Posttransplant measurements were determined as early-term (between 6 months and 1 year) and long-term (longer than 1 year) and were compared with each other. Shortening fraction and ejection fraction were measured from the parasternal long axis view. Early diastolic mitral inflow velocity (E), velocity during active atrial contraction (A), and E-to-A wave (E/A) ratio were measured by pulsed wave Doppler at the leaflet tips. Isovolumic relaxing time was calculated with pulsed wave Doppler at apical 5-chamber view. Tissue Doppler imaging was obtained with the sample volume placed at the lateral corner of the mitral annulus, at the lateral corner of tricuspid annulus, and on the midseptal region. Mitral early diastolic annular velocity (E´) results were recorded, and the tissue Doppler-derived Tei index (Tei) (the sum of the isovolumetric contraction time and the isovolumetric relaxation time divided by the ejection time) was determined. The ratio of early diastolic mitral inflow velocity to early diastolic annular velocity (E/E´) was calculated. Tricuspid annular plane systolic excursion (TAPSE) (the distance of systolic annular RV excursion along a longitudinal line defining the end of systole) was measured in 4-chamber view. Pulsed tissue Doppler-derived tricuspid lateral annular systolic velocity was noted.5-6 Left ventricle Tei index, RV Tei index, and septal Tei index were calculated individually.7-10

Statistical analyses
Statistical analysis was performed using SPSS software (version 24.0, SPSS Inc., Chicago, IL, USA). All numerical data are expressed as median values (minimum to maximum [range]). For each continuous variable, normality was checked by Kolmogorov-Smirnov and Shapiro-Wilk tests and by histograms. Measurement data before and after KT were analyzed with Wilcoxon test. Values of P < .05 were considered statistically significant.

The study included 30 children (21 male, 9 female) who had KT between 2011 and 2017. Clinical characteristics of the patients are presented in Table 1. The median age was 13 years (range, 5-19 y). The median follow-up after transplant was 44 ± 23 months (range, 13-96 mo). Twelve patients received deceased-donor KT, and 18 patients received living-donor KT. The left ventricular ejection fraction, an indicator of the effectiveness of pumping into the systemic circulation, was normal in all patients at baseline and after transplant. Transplant recipients were maintained on an immunosuppression regimen that included calcineurin inhibitors, corticosteroids, and antimetabolites.

This study evaluated the echocardiographic alterations in the early-term and late-term periods after KT. Here, we demonstrated that systolic and diastolic myo­cardial functions were improved after KT.

Cardiovascular risk factors after transplant are interlinked and are increased as adverse effects of immunosuppression therapy. Hypertension is com­mon, with 50% to 75% of KT recipients pre­senting with this complication, and is associated with LV hypertrophy.11 Common findings with both RV and LV hypertrophy are collagen deposition, fibrosis, and extracellular matrix modeling, which is closely associated with stiff ventricles and abnor­malities in ventricular relaxation.12 Left ventricle diastolic dysfunction usually precedes LV systolic dysfunction in patients with chronic renal failure.

Left ventricle diastolic function should be evaluated with mitral E/A ratio, mitral E/E´ ratio, isovolumic relaxation time, and Tei index. The statistically significant decrease in mitral E and mitral A velocities that we observed may have occurred due to hemodynamic alterations in preload. Mitral E/A values were similar after transplant. Mitral E/E´ ratio can be used to predict LV filling pressures.13 In our study, mitral E/E´ values were abnormal in 9 patients before transplant, but these results were not significant compared with posttransplant results. Isovolumic relaxation time is prolonged in patients with impaired LV relaxation. In our study, isovo­lumic relaxation time values were above 70 ms in 26 patients before transplant and in 21 patients in the late-term posttransplant. Impaired LV relaxation remained after transplant with a frequency of 70% (21/30 patients). Diastolic tissue velocity, a marker of subclinical disease, added incremental value to clinical predictors of events. Left ventricle systolic and diastolic tissue Doppler imaging velocities are dependent on myocardial structure, in particular with myocardial fibrosis. The Tei index has been considered a sensitive indicator of the severity of myocardial dysfunction.14 The LV Tei indices of tissue Doppler, which were significantly decreased early after transplant, were similar when we compared early-term and late-term results.

According to the Cardiovascular Prevention Pre-Transplant Work-Up study, reported by Delville and associates, past history of cardiovascular disease, echocardiography showing LV hypertrophy, and abnormal Tei could be associated with increased occurrence of cardiovascular events during the first year posttransplant.15 Better LV cardiac functions should be explained with lower blood pressure and improved preload after transplant. Balal and asso­ciates reported that, although most of the biochemical parameters were improved to normal levels after KT, LV mass index and biventricular diastolic dysfunction were not dramatically regressed.16 Hirth and asso­ciates reported that pediatric KT recipients have abnormal LV diastolic function and impaired exercise capacity despite relatively preserved systolic function. Systolic blood pressure was the main covariate of LV deformation.17 In our study, we observed that LV diastolic parameters (mitral E/E´ ratio or septal and LV Tei index) significantly improved after transplant but that impaired LV relaxation had not dramatically regressed. Because diastolic heart dysfunction can occur as a result of impaired myocardial active relaxation or increased ventricular passive stiffness, the main reason of LV residual diastolic dysfunction in our pediatric study population was due to impaired LV relaxation.

Although the RV and LV have important dif­ferences in embryology, form, and function, they share many common characteristics when they adapt to adverse loading or when they fail. Right ventricle physiology and failure are most frequently affected by increased preload or afterload. The RV can tolerate volume overload well but is not able to sustain pressure overload. Right ventricle dysfunction is significantly prevalent among patients with chronic kidney disease on regular hemodialysis. Reduced RV function has been shown to be independent of LV hypertrophy, whereas diastolic dysfunction of LV showed an impact on RV index.18

The assessment of RV function is a crucial issue in patients with end-stage renal disease and KT recipients.19,20 However, RV imaging is challenging due to the complex shape of the RV cavity. The criterion standard is considered to be magnetic resonance imaging, but there are some limitations of this technique, including its limited availability and its expense. The use of the RV Tei index offers an early tool for noninvasive assessment of both systolic and diastolic RV function. However, it is easy to understand that the most practical and easy way to analyze RV systolic function is to determine either TAPSE or RV systolic velocity.21 In our study, the RV Tei index was significantly higher that that shown before transplant, with early-term posttransplant results similar to late-term results. An abnormal RV Tei index remained in 14 patients (46%), even in the long-term posttransplant. We found that TAPSE and RV systolic velocities were similar before and after transplant, with TAPSE levels normal (< 16 mm) in all patients but RV systolic velocities abnormal in only 2 patients according to long-term results. These findings suggest improved RV systolic function but still impaired diastolic dysfunction after transplant. The most important finding of our study was that RV diastolic dysfunction was shown more often before and after transplant and improved later than LV dysfunction.

There are several differences in clinical characteristics of pediatric KT recipients versus adults. We found that heart function improved after KT. However, significant ongoing cardiac morbidities associated with the underlying chronic conditions of patients remained after transplant. Echocardiography and tissue Doppler echocardiography provided more accurate information about both LV and RV function. Right ventricle dimensions and RV function should be routinely assessed during patient evaluations. The persistence of RV dysfunction after transplant requires special attention, with the suggested use of measures such as Tei index, TAPSE, and/or tricuspid annular systolic velocity. Further studies are needed to explore the cause of RV dysfunction in end-stage renal disease and in transplant recipients to determine its impact on patient survival. 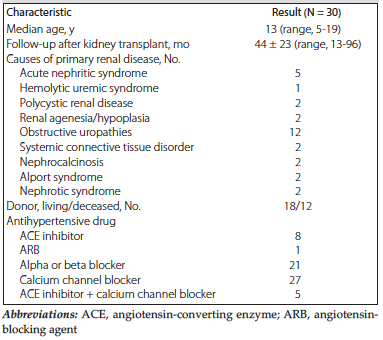 Table 4. Detection of Left and Right Ventricle Dysfunction Before and After Transplant 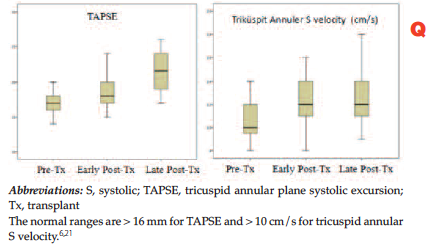 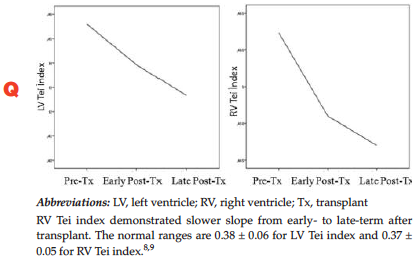