Posterior reversible encephalopathy syndrome is a rare and serious neurologic adverse effect of calcineurin inhibitors. The pathophysiology of this clinical entity is still unclear. Impaired cerebral autoregulation and endothelial dysfunction are thought to be the main pathologic processes. Imaging shows the syndrome to be characterized by vasogenic edema or cytotoxic edema in parietal and occipital areas of the brain. With regard to clinic presentation, headache, diminished visual acuity, cortical blindness, altered consciousness, seizures, and hallucinations can be seen. It is known that the clinical presentation is improved when calcineurin inhibitors are stopped early. Here, we present and evaluate a case of a cortical blindness that developed in a 36-year-old patient who had been using tacrolimus after renal transplant and who returned to health after 1 week of hospitalization.

Although posterior reversible encephalopathy syndrome (PRES) has been known as an increasingly recognized syndrome since 1996, there are few reports on its presentation with regard to emergency medicine. So far, the pathophysiology of PRES is unclear, but there are some theories that stand out. The first of these is a theory of impaired cerebral vascular autoregulation caused by rapidly devel-oping hypertension due to parieto-occipital area hyperperfusion, which is weaker in terms of sympathetic innervation of the brain, and vasogenic edema due to protein leakage and fluid extravasation.1-3 Another theory that causes this clinical condition is ischemia, which develops as a secondary response to vasospasm.4 The latest theory holds endothelial dysfunction responsible, which is similar to the development of eclampsia.5,6

Although the syndrome frequently affects the posterior area of the brain, it is known that it can also involve other areas, including the frontal lobe and cortex, and presents with related clinical conditions. Although defined as reversible, status epilepticus, intracranial hemorrhage, which may occur as a complication in the disease process, can cause significant morbidity and mortality.7

With regard to the causes of PRES, autoimmune diseases (such as thrombotic thrombocytopenic purpura, Wegener granulomatosis, and systemic lupus erythematosus), hypertension, sepsis, multiple organ dysfunction, and cytotoxic drug use have also been reported.1,2 Calcineurin inhibitors, such as cyclosporine and tacrolimus, are the most implicated immunosuppressants of PRES in the literature along with high-dose steroid therapy and sirolimus. Patients with PRES may present with vision disorders, encephalopathy, headache, and decreased visual acuity and cortical blindness.

A 36-year-old female patient who had 13 years of dialysis for chronic renal failure and had undergone deceased-donor renal transplant about 6 weeks earlier was admitted to the emergency department with complaints of progressive loss of vision and headache. The patient showed no changes in consciousness and no seizures during examination. She was using prednisolone, mycophenolate mofetil, valganciclovir, and tacrolimus.

The patient’s general condition was good, conscious, fully oriented, and cooperative on her examination. Her blood pressure level was 155/91 mm Hg, heart rate was 108 beats/minute, respiration rate was 20 breaths/minute, and fingertip oxygen saturation was 98%. Cardiovascular exam-ination showed no murmurs, but bilateral pretibial edema was seen. Abdominal examination showed no defense or rebound. We heard no abnormalities in lungs during pulmonary auscultation of the respiratory system. During neurologic examination, Glasgow coma scale showed 15/15, and bilateral light reflex was normal. However, both eyes of the patient were shown to be mydriatic. On visual acuity examination, she only could perceive an intense light from a distance of 15 cm. Bilateral optical disc boundaries were faintly shown during eye examination. Muscle strength was detected to be fully functional bilaterally in both the upper and lower extremities.

Because of the imaging findings and clinical story of the patient, we considered PRES, resulting in treatment for blood pressure control and having the patient stop tacrolimus intake. The patient also required consultation with neurology, which noted that symmetrical involvement in both posterior brain areas and progressive loss of vision were related to PRES. The patient was hospitalized in our transplant department.

Another diffusion-weighted magnetic resonance imaging examination, which was taken on day 8 after visual improvement, showed diffusion restrictions of the bilateral occipital region to be regressed (Figure 4). On day 9 of hospitalization, she was discharged with full recovery.

The underlying physiopathology of PRES with undetermined origin has been thought to be due to impaired vascular autoregulation, resulting in increased endothelial permeability and cerebral edema.2,5 This syndrome can be a rare adverse effect of immunosuppressive agent use, with diagnosis by characteristic neuroimaging findings that accompany neurologic findings. Although an association between nontoxic doses of tacrolimus and symptoms has been shown,8 no clear correlation has been found,9,10 leading to the conclusion that therapeutic doses of tacrolimus may cause encephalopathy.1 It has also been shown that individuals with ABCB1 gene polymorphism in the liver are predisposed to calcineurin-related neurotoxicity.11

Occipital white matter appears to be uniquely susceptible to the neurotoxic effects of calcineurin inhibitors. Injury to both the major and minor vascular structures may cause hypoperfusion or ischemia and local secondary toxicity in the white matter.12 Hyperintense lesions are seen in fluid-attenuated inversion recovery imaging and T2-weighted sequences in neuroimaging. However, it is not possible to distinguish whether these lesions are caused by cytotoxic or vasogenic edema on T2-weighted imaging. Therefore, ADC mapping should also be performed to exclude the glare effects of T2-weighted images. Diagnostic findings in ADC mapping include cytotoxic edema, which is more common in the occipital, parietal, frontoparietal, and inferior temporo-occipital areas, and white matter lesions in regions that indicate irrigated areas of major branches of the cerebral arteries.14

In transplant recipients, severe hypertension has been shown to be directly associated with the development of PRES.14 Because the risk of seizure development is significantly increased with this syndrome, it is critical to recognize the possible increased mortality and morbidity with status epilepticus early and to maintain strict blood pressure follow-up during hospitalization and in the emergency department.2 In the presence of auto-immune diseases such as underlying systemic lupus erythematosus and thrombotic thrombocytopenic purpura, oral and/or intravenous antihypertensive treatments may be insufficient to control blood pressure; therefore, treatment methods other than conventional treatments, including plasmapheresis, should be considered.15 In our patient, recovery without sequelae was achieved with discontinuation of tacrolimus, a calcineurin inhibitor, administration of an oral antihypertensive medication (amlodipine) for blood pressure control, and seizure observation.

The most common presentation of PRES, which is rarer with immunosuppressant agents such as tacrolimus, is seizures, encephalopathy, headache, and visual disturbances.6 Including this syndrome, which can result in recovery without sequelae with interventions such as interruption of tacrolimus use and close blood pressure control, in early differential diagnosis and imaging should be considered in specific groups (posttransplant, immunosuppressant use) when patients present with changes in con-sciousness. 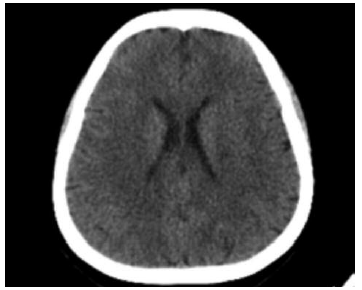 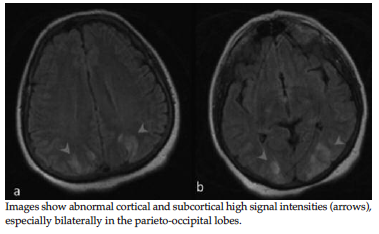 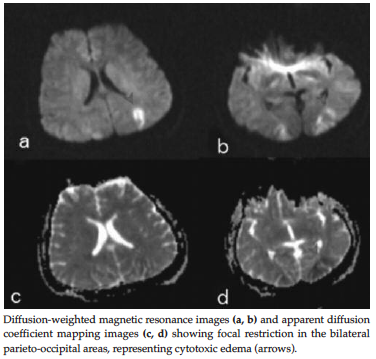 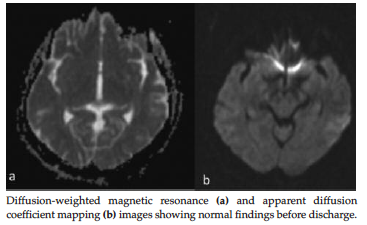