Objectives: Infection-associated emergency department use in renal transplant recipients has been increasing as solid-organ transplant has become a more common treatment method for chronic kidney failure. Platelet-to-lymphocyte ratio has been demonstrated to be significantly elevated in nosocomial infections in patients treated at intensive care units and is positively correlated with duration of hospital stay. In this study, we aimed to determine whether the platelet-to-lymphocyte ratio could be used as an indicator of infection in renal transplant patients presenting to emergency departments.

Materials and Methods: This case-control retrospective study included data from between May 2015 and February 2018. We used the patient information management system to review patient medical records and laboratory test results of study participants.

Conclusions: For systemic inflammation, platelet-to-lymphocyte ratio can be used in conjunction with other biomarkers as an indicator of inflammation in renal transplant recipients who present with infection-associated causes to emergency departments.

Infection-associated emergency department use in renal transplant recipients has been currently increasing as solid-organ transplant has become a more common option for treatment of chronic kidney failure.1 On the other hand, several indicators of inflammation, including C-reactive protein (CRP) and procalcitonin, are available for use in renal transplant patients as they are for several other diseases. A study from Baskent University, published within the framework of the search for a new bioindicator, proposed that cost-effective tests providing faster results for emergency physicians would be beneficial for renal transplant patients. The study suggested the use of red cell distribution width (RDW) as a candidate parameter in this regard.2

Similar to RDW, platelet-to-lymphocyte ratio (PLR) is a complete blood count parameter that is calculated by physicians by dividing the platelet count by lymphocyte count as derived from complete blood count test results. A search made by using the key words “platelet lymphocyte ratio” in PubMed, which is the National Library of Medicine in the United States, yielded 401 results as of June 29, 2018. Platelet-to-lymphocyte ratio has been reported as a potential predictor of several diseases, ranging from varying types of malignancies to acute inflammatory de-myelinating polyneural radiculopathy and from attention deficit hyperactivity disorder to erectile dysfunction.3-8 With regard to infection-associated conditions, PLR has been demonstrated to be significantly elevated in nosocomial infections in patients treated at intensive care units and is positively correlated with the duration of hospital stay.9 Similarly, Orak and associates found elevated levels of PLR associated with mortality observed in patients diagnosed with sepsis in emergency departments.10 However, in the literature, we did not find a study on PLR levels investigated in renal transplant recipients.

In this study, we aimed to determine whether PLR could be used as an indicator of infection in renal transplant recipients presenting to emergency departments.

This retrospective case-control study included patients seen from May 2015 to February 2018 at the adult emergency department of Baskent University Ankara Hospital (Ankara, Turkey). The study received Ethics Committee approval. We included 156 renal transplant recipients who presented with infections (patient group) and 170 patients without any signs of infection who presented at the outpatient transplant clinic for routine follow-up (control group). We reviewed medical records and laboratory test results of study participants from the patient information management system. We collected the following information of patients at the time of presentation: age, infection focus, and hospital stay duration if hospitalized. We also recorded complete blood count results (leukocyte, erythrocyte, throm-bocyte, neutrophil, and lymphocyte counts), mean corpuscular volume, mean platelet volume, RDW, and CRP level. Data from the study group and the control group were statistically compared.

Statistical analyses
Statistical analyses were performed with SPSS software (SPSS: An IBM Company, version 17.0, IBM Corporation, Armonk, NY, USA).Demographic, clinical, and laboratory data of patients are shown as means and standard deviation, median, interquartile range, and percentages. Chi-square test was used for comparisons of categorical data. The normal distribution of continuous data was assessed by the Kolmogorov-Smirnov test. The results of this test revealed that the data were not normally distributed considering all data in the study. Therefore, we used a nonparametric test, the Mann-Whitney U test, to analyze the data. We plotted the receiver operating characteristic (ROC) curve to determine the sensitivity and specificity of PLR and CRP. For values below the ROC curve, we defined values above 0.9 as excellent, values between 0.8 and 0.9 as very good, and values between 0.7 and 0.8 as acceptable. We calculated and analyzed 95% confidence intervals. P<.05 was considered as statistically significant.

Table 1 shows laboratory test results by group. As shown, there were statistically significant differences between the patient and control groups in terms of the number of days of hospital stay; leukocyte, neutrophil, and lymphocyte counts; and PLR, RDW, and CRP results.

Table 2 shows sites of infection in the patient group. As shown, the most common focus of infection origin was the upper respiratory tract (32.7%). We compared PLR levels of patients according to 5 infection site groups by using the Kruskal-Wallis test. We observed no significant differences (P=.34) between the infection sites.

We plotted the ROC curve to determine the sensitivity and specificity of PLR and CRP levels, which is accepted as the criterion standard for indication of infection. The ROC curve demonstrated that areas under the curve were 0.892 for CRP and 0.707 for PLR. Based on the derived ROC curve results, we found that PLR is an acceptable indicator of infection in patients who undergo renal transplant (Figure 1).

In our study, compared with the control group, PLR was higher in renal transplant recipients who presented to the emergency department with infection-associated causes. We believe that PLR, which can be derived within a few minutes and without requiring additional financial burden, is an acceptable bioindicator of infection, although it is not as excellent as CRP, which is accepted as the criterion standard in our study.

No statistically significant differences between groups were shown in terms of patient age or patient sex. Indeed, individuals included in the study were of similar ages, and the distribution of males and females in the 2 groups was similar.

Recent studies have shown that high levels of PLR can be used as an indicator of malignancies, including lung cancer,11 cervical cancer,6 and pancreatic cancer,12 or as an indicator of sepsis10 and even of heroin dependence.13 In this respect, our results were consistent with other studies in the literature. That is, PLR was significantly higher in renal transplant patients with infection in our study compared with our control group.

In a study from 2013, Turkmen and associates reported that PLR can be used to predict inflam-mation in patients with end-stage renal disease and that it is superior to neutrophil-to-lymphocyte ratio when used as an indicator of inflammation.14 Akbas and associates demonstrated that increased PLR levels were significantly correlated with albuminuria and that, according to results from logistic regression analysis, PLR was independently associated with albuminuria.15 We suggest that the PLR-albuminuria association is important when increased albuminuria level and decreased glomerular filtration rate are considered with regard to chronic kidney disease progression to end-stage renal failure.

Although we did not compare levels of PLR versus neutrophil-to-lymphocyte ratio in our study, both of these potential bioindicators are derived from the same complete blood count analysis. Therefore, we agree that these tests and their use will not bring any additional financial costs or medical burdens and will be beneficial when used in combination in the decision-making process.

In our study, CRP results and leukocyte, neutrophil, and lymphocyte counts were significantly higher in transplant recipients with infection compared with results shown in the control group. On the other hand, RDW levels were significantly lower in the trans-plant recipients with infection compared with the control group. Kayipmaz and associates from our clinic found RDW values to be significantly higher in their patient group compared with their control group and suggested that an increase in RDW could be a useful indicator of infection in kidney and liver transplant recipients.2 Likewise, Mucsi and colleagues found that high levels of RDW were associated with mortality in renal transplant recipients.16 We suggest that the different results of our study were because individuals in our patient group were immunosup-pressed patients and that our findings may also be related to medications used and to comorbidities of patients.

Lovasik and associates reported that, at emergency medical care services, the most common diagnoses in renal transplant recipients post-transplant were lower respiratory tract diseases, with symptoms of cough and shortness of breath.17 In our study, the respiratory system was also the most common focus of infection in the patient group when upper respiratory tract infections and pneumonia diagnoses were taken together. Considering the underlying comorbidities of immunosuppressed renal transplant recipients, this may be related to their high risk for community-acquired upper and lower respiratory infections, including common colds, tonsillitis, pharyngitis, and laryngitis included in the former group17 and bronchitis and pneumonia in our study.

With regard to systemic inflammation, PLR, which can be easily calculated from whole blood counts, can be used in conjunction with other biomarkers as an indicator of inflammation in renal transplant recipients presenting with infection-associated causes to emergency departments. This indicator can be tested with automated devices in periods shorter than 1 minute and without any additional costs; results can allow the emergency clinician to determine need for further diagnostic tests or treatments. In addition, the test can allow an earlier recognition of the rejection process when its association with albuminuria is taken into consideration. Future studies investigating the relationship between PLR levels and the rejection process will contribute to this issue.

From the 1Department of Emergency and the 2Department of General Surgery, Division of Transplantation, Baskent University Faculty of Medicine, Ankara, Turkey
Acknowledgements: The authors have no sources of funding for this study and have no conflicts of interest to declare.
Corresponding author: Afsin Emre Kayipmaz, Baskent University Faculty of Medicine, Department of Emergency, Fevzi Cakmak Street Number: 45 06490 Bahcelievler, Ankara, Turkey
Phone: +90 312 203 68 68
E-mail: aekayipmaz@baskent.edu.tr 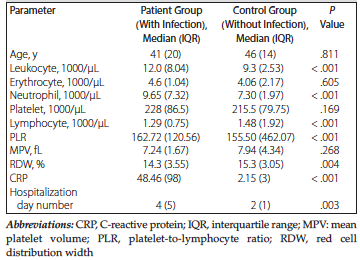 Table 1. Comparison of Variables in Patient and Control Groups 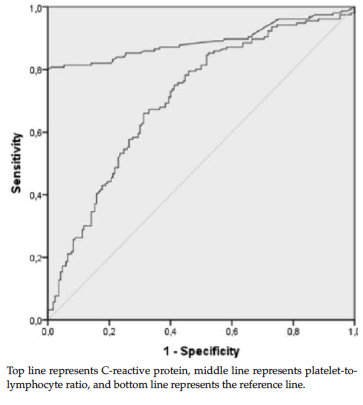