Materials and Methods: From December 1988 to October 2017, our center performed 580 liver trans­plant procedures. Those diagnosed with hepatic artery thrombosis (19 females, 24 males) by Doppler ultraso­nography during postoperative week 1 were analyzed. Patients received either surgery or endovascular treatment for hepatic artery thrombosis, with patency confirmed by Doppler ultrasonography. We compared portal vein flow velocity and caliber before and after treatment using Wilcoxon signed rank and Mann Whitney U tests.

Conclusions: The significant decrease in portal vein flow velocity after successful treatment of hepatic artery thrombosis may represent a compensatory flow change of the portal vein in response to diminished hepatic artery flow.

Hepatic artery (HA) thrombosis is the most common and severe complication after liver transplant. Thrombosis of the HA occurs in 4% to 12% of adult and 42% of pediatric liver transplant recipients and is associated with a significant mortality rate of 20% to 60%.2,3 Early diagnosis of HA thrombosis is an important issue to prevent the necrosis of liver parenchyma or biliary ischemia and to establish graft viability.

Doppler ultrasonography is considered as the primary imaging modality in the diagnosis of postoperative vascular complications in liver transplant.4 Ultrasonography provides information about the flow pattern, velocity, resistive index, and the caliber of HA. In addition, the hepatic arterial system and the portal venous and hepatic venous systems may be evaluated by Doppler ultrasono­graphy synchronically. The hepatic vasculature is a unique and complicated system due a dual supply that includes the HA and portal vein (PV), which may interact to maintain adequate vascular supply in the liver.5 About 75% of the blood flow entering the liver is supplied by the PV, and the remaining 25% is established by the HA.5

Regulation of liver blood flow is maintained by several mechanisms.5,6 Hepatic arterial buffer res­ponse (HABR) is an intrinsic regulation mechanism that is based on the relationship between HA and PV.5-7 According to this mechanism, reduced blood flow in the PV leads to increased blood flow and caliber of the HA due to accumulation of adenosine concentration in the space of Mall.5,6 Similarly, the HA may constrict in response to PV hyperperfusion by the HABR mechanism.7 Although the HA presents compensatory flow changes due to decreased flow in the PV, several studies have revealed that there is no reciprocity of the HABR mechanism in which PV flow did not produce any compensatory response during impaired HA flow.5-9 Here, we analyzed PV flow changes in patients diagnosed with HA thrombosis after liver transplant to determine whether the PV system presents any response to HA thrombosis.

Patients
Our retrospective study was approved by the Institutional Review Board of Baskent University Hospital (approval number: KA18/77). From December 1988 to October 2017, our center performed 580 liver transplant procedures. Of these, 43 recipients (19 females, 24 males) with HA thrombosis, diagnosed by Doppler ultrasonography during posttransplant week 1, were included in this study. Surgery or endovascular treatment (EVT) was used for treat­ment of HA thrombosis, with HA patency then confirmed by Doppler ultrasonography. Flow velocity (FV) and caliber measurements of PV before and after treatment were obtained from our database. For analysis, we also divided patients into 3 subgroups: (1) age (child or adult), (2) type of liver transplant (orthotopic liver transplant [OLT] or living-donor liver transplant [LDLT]), and (3) treatment option (surgery or EVT).

Ultrasonography technique
Gray-scale, color, and pulsed Doppler ultrasono­graphs of HA were examined using a 9L4 MHz linear-array transducer system in pediatric recipients and 2 to 5 MHz and 4C1 MHz convex transducer systems in adult recipients (Siemens Sonoline Versa, Siemens Sonoline Elegra, Siemens Sonoline Antares, Munich, Germany) before 2010. After 2010, patients were examined with the Siemens Acuson S2000 ultrasonography system (9L4 MHz linear-array transducer for pediatric recipients and 6C1 MHz convex transducer for adult recipients). Ultrasono­graphy examinations were performed with patients in a supine position both before and after treatment. Diagnosis of HA thrombosis was made by observation of complete absence of HA flow and waveform by color and pulsed Doppler ultrasono­graphy. After treatment with surgery or EVT, HA patency was confirmed by Doppler ultrasonography within 1 hour posttreatment. The treatment was defined as successful if flow and optimal waveform pattern were observed, with FV > 20 cm/s and resistive index > 0.5 in the HA. Caliber and flow pattern of PV were also examined by Doppler ultrasonography at diagnosis of HA thrombosis and after treatment. All measurements of FV and caliber of PV were obtained from our institutional database.

Treatment options
Patients with HA thrombosis were treated with either surgery or EVT. During surgery, laparotomy with an upper abdominal transverse incision was performed, with anastomosed site evaluated carefully to determine the surgical option for effective treatment. First, the HA was washed with heparinized saline solution. When no improvement of blood flow was observed, a thrombectomy procedure was performed by Fogarty catheter, which was inserted into the anastomosed region. If no improvement in blood flow was shown after thrombectomy, reanasto­mosis or revascularization with vascular conduits was performed.

During EVT, a microcatheter and a 0.016-inch guide wire were positioned within the thrombosed HA via a 5F diagnostic catheter. Angiography was performed to evaluate the patency of distal branches. The microcatheter was advanced distally, and a 0.014-inch guide wire was placed to the distal part of the thrombus. A 6F guiding catheter was then positioned into the origin of the celiac trunk, and a 4F catheter was inserted into the HA for thrombolytic infusion. Infusion was delivered for a few days to treat the residual thrombus. The use of balloon angioplasty or bare or graft-covered stent placement was assessed for treatment of the underlying anatomic defects.

Statistical analyses
Statistical analyses were performed with SPSS software (SPSS: An IBM Company, version 22.0, IBM Corporation, Armonk, NY, USA). The Kolmogorov-Smirnov test was used to analyze normal distri­bution of data. All measurements are expressed as means with 2 standard deviations, medians, and minimum and maximum values. We used Wilcoxon signed rank test to compare the pretreatment and posttreatment measurements of FV and caliber of PV in all cases. We also compared pretreatment and posttreatment measurements of FV and caliber of PV within the 3 subgroups (surgery vs EVT treatment, OLT vs LDLT, and pediatric vs adult recipient) by using paired sample t test for normally distributed data and Wilcoxon signed rank test for nonnormally distributed data. We also calculated decreasing degree of FV with the following formula: 1 – FVpost/FVpre, where FVpre is the pretreatment value and FVpost is the posttreatment value. Differences in decreasing degree of FV between the 3 subgroups were analyzed with the Mann-Whitney U test. P values < .05 were statistically significant.

Representative patient images are shown in Figure 1 and Figure 2.

Constancy of liver blood flow is essential to maintain graft viability after liver transplant. Several hepatic hemodynamic mechanisms, including HABR, provide constancy of hepatic blood flow with regard to flow interactions between the HA and PV.5-7 Previous studies have mainly revealed that PV system failure, including stenosis or thrombosis, contributed to the compensatory changes in the HA system (ie, HABR).5-7 However, no reciprocity of the HABR has been reported in the PV system in cases of HA obstruction in previous reports.5-8

In both adult and pediatric patients, HA throm­bosis features at Doppler ultrasonography include the complete absence of HA and intrahepatic flow of HA.12,13 However, no significant flow changes in the PV system have been previously reported.3,12-14 The PV system cannot regulate its blood flow, and splanchnic vascular flow and intrahepatic resistance affect PV pressure and flow.5 In the early post­transplant period, the PV system generally shows flow changes due to splanchnic flow and postoperative edema or fluid collections. In addition, the FV of PV may range from 15 to 400 cm/s in the early posttransplant period.12 In the present study, we found that the FV of PV ranged from 25 to 200 cm/s in our pediatric subgroup and from 48 to 300 cm/s in our adult subgroup at diagnosis of HA thrombosis. After treatment of HA thrombosis, FV of PV significantly decreased in both pediatric and adult transplant recipients. We also found no differences in the decreased degree of FV between our pediatric and adult subgroups. As mentioned, PV flow depends primarily on changes in the splanchnic and mesenteric vascular system; however, we found that FV of PV decreased significantly after successful treatment of HA thrombosis. This could be because the PV system may present compensatory changes when HA flow decreases to maintain the liver vascular supply. During HABR, besides HA flow changes, dilatation of HA occurs in the obstruction of PV to establish adequate blood supply. However, we observed no significant chang in the caliber of PV after treatment of HA thrombosis in both our adult and pediatric subgroups.

There are 3 main transplant types: OLT, LDLT, and split type. Among those, OLT is the most com­mon type. In our study, most patients in the adult subgroup had LDLT (n = 40), with the remaining patients having OLT (n = 3). In the pediatric subgroup, all patients had LDLT (left lobe lateral segment in 23 patients and left lobe in 3 patients). In LDLT subgroup, FV of PV was significantly decreased after treatment compared with before treatment. However, no significant change in FV of PV was found in the OLT subgroup. This may be related to our small sample size (n = 3). We also observed that PV caliber did not significantly change after treatment in both the LDLT and OLT subgroups.

Endovascular treatment options may offer advantages of being easy to perform and allow the thrombosis site in the HA to be quickly reached; this option can also be used during serial interventions for residual and refractory lesions. However, complications include rupture, dissection, distal embolism, and bleeding complications due to the IATL. In pediatric cases, the technique is difficult because the small caliber of the pediatric vessels may restrict performance of EVT procedures.15,18 In our study, the patency of HA was maintained by open surgery in 18 patients and EVT in 25 patients. In our surgery subgroup, 6 cases (33.3%) required vascular conduits, 3 cases (16.6%) required reanastomosis with native HA, 6 cases (33.3%) required throm­bectomy, and 3 cases (16.6%) required washing the HA with heparinized saline. For HA thrombosis, revascularization with vascular conduit is the most preferred treatment option due to the advantages of having better arterial flow and lower recurrence risk compared with thrombectomy and reanastomosis of native HA or EVT procedures.15,19,20

In addition to HA flow alterations after successful treatment of HA thrombosis, the PV may also present flow changes during HA failure. We found that FV of PV decreased significantly after treatment in both the surgery and EVT subgroups. Moreover, we observed that the decreasing degree of FV of PV after treatment was significantly higher in patients who were treated with open surgical options versus EVT. The higher ratio of the decreasing degree of FV of PV in the surgery subgroup may be related to a better potential for reestablishment of the arterial inflow during surgery compared with EVT.

Our study has several limitations. First is its retros­pective design. Because of its retrospective design, intra- and interobserver variability tests and test-retest reliability were not analyzed. Second, the duration of liver disease, which may affect the hepatic hemodynamic relationship between HA and PV, was not evaluated in our study. Third, we did not analyze the flow volume of PV, which may provide additional information about PV flow changes besides the FV of PV. Finally, our small sample size could decrease the reliability of measurements of PV flow changes and caliber before and after treatment.

From the 1Department of Radiology and the 2Department of General Surgery, Baskent University School of Medicine, Ankara, Turkey
Acknowledgements: The authors have no sources of funding for this study and have no conflicts of interest to declare.
Corresponding author: Sehnaz Tezcan, Guvenevler mah, Kibris sok, 9/17 Kavaklidere, Ankara, Turkey
Phone: +90 533 455 55 33
E-mail: sehnazce@yahoo.com

Table 1. Portal Venous Flow Velocity and Caliber in All Subgroups 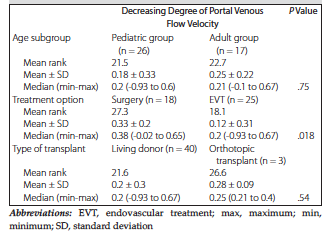 Table 2. Decreasing Degree of Portal Venous Flow Velocity After Treatment in All Subgroups