Smith-Lemli-Opitz syndrome is an autosomal recessive metabolic disease characterized by mental retardation and multiple congenital anomalies. The main path-ology is the lack of the enzyme 3β-hydroxysterol Δ7-reductase, which is the last enzymatic step in cholesterol synthesis, ending with a low cholesterol level. Cholesterol is vitally important in cell membranes and myelination of the nervous system. The cholesterol level affects many systems of the body, especially the nervous system. The cause of liver involvement in Smith-Lemli-Opitz syndrome is unclear, and many hypotheses have been suggested. Here, we present the early results of a patient with Smith-Lemli-Opitz syndrome who underwent living-donor liver transplant due to cirrhosis. As a result of liver transplant, normal cholesterol levels were shown, as well as improvements in the patient’s neuro-development and behavior. Early liver transplant may be considered for patients with a defect of cholesterol biosynthesis, even in the absence of cirrhosis, and may be a future treatment option to prevent risks of neurologic deterioration.

Smith-Lemli-Opitz syndrome (SLOS) is an autosomal recessive disease that develops as a result of failed cholesterol synthesis due to a lack of 3β-hydroxysterol Δ7-reductase, which is the final enzyme in cholesterol synthesis. Cholesterol has vital roles in cell mem-branes and myelination of the nervous system. It also contributes to the structure of steroid hormones and bile acids and has an active role in the metabolism of vitamin D.1

In SLOS, mental retardation, behavior disorders, and several congenital malformations are seen as a consequence of low cholesterol and high 7- and 8-dehydrocholesterol levels. In this case report, we report the early results of a patient with SLOS who underwent liver transplant, which resulted in normal cholesterol level and improvements in neuro-development and behavior. Written informed consent was obtained from the patient’s parents for publication of this research article and accompanying images.

A 19-month-old boy was referred to our center with a diagnosis of SLOS with liver cirrhosis for liver transplant. The mother was 28 years old, and the baby had been delivered by caesarean section in week 35 of pregnancy with a birth weight of 1.730 g. He was the first and only child of the family, and there was no kinship between the parents. The patient’s history revealed growth and developmental delay and apparent undernourishment. A physical examination showed dysmorphic disorders, mental and motor retardation, microcephaly, bifrontal narrowing, ptosis, an upturned nose, anteverted nostrils, epicanthic palpebral fissures, and low-set, posteriorly rotated ears (Figure 1A), penoscrotal hypospadias, syndactyly of the second and third toes in the form of a “y” (Figure 1B), and hepato-splenomegaly. At 4 months of age, a percutaneous endoscopic gastrostomy catheter was placed for nutrition, and the infant was fed a cholesterol-rich diet. At that time, the total cholesterol level was 17 mg/dL and the 7-dehydrocholesterol level was 586 mg/dL. Before referral, the patient had been diagnosed with SLOS based on the history, physical examination, and laboratory findings. DHCR7 gene mutation screening showed a heterozygous c.278 C>T in one allele and a heterozygous IVS7+1 G>A in the other, confirming the diagnosis. Cranial magnetic resonance imaging showed partial corpus callosum agenesis (Figure 1C), whereas the electroenceph-alography was normal. During follow-up, an ultrasonography-guided Tru-Cut liver biopsy was performed to evaluate the hepatosplenomegaly; when cirrhosis was found, the patient was referred to our center to be evaluated for liver transplant.

At the initial examination at our center, the patient weighed 9000 g, was 77 cm tall, and had a head circumference of 42.5 cm (all 3rd percentiles). The laboratory findings were normal, and total cholesterol level was 23 mg/dL. A left lateral sector living-donor liver transplant from his uncle was performed. He was discharged on postoperative day 15. The pathologic findings of the explanted liver revealed inactive cirrhosis, mild steatosis in hepatocytes, and pericentral and perisinusoidal fibrosis (Figure 2) .These findings confirmed the metabolic disease (ie, SLOS). The patient’s total cholesterol levels over time are shown in Table 1.

Thirty-four months after transplant, the patient was able to sit by himself, had ability to swallow yoghurt, could play with toys, and could stand by himself. He showed a desire to walk with support. We observed continuous improvements in the patient’s fine motor and hand skills. He is still fed from percutaneous endoscopic gastrostomy catheter. Furthermore, his social attention increased. The patient required tacrolimus as an immunosup-pressive agent. No serious additional complications occurred during the 34-month follow-up period.

Cholesterol is vitally important in cell membranes and myelination of the nervous system. It also contributes to the structure of steroid hormones and bile acids and has an active role in the metabolism of vitamin D. Smith-Lemli-Opitz syndrome develops due to a deficit in cholesterol synthesis as a result of a lack of the enzyme 3β-hydroxysterol Δ7-reductase, which is the final enzyme in cholesterol synthesis. The DHCR7 gene is located at 11q12-13.1,2 Smith-Lemli-Opitz syndrome is an autosomal recessive disease first described by Smith and associates in 1964.3 Its incidence is approximately 1 in every 40 000 live births. This syndrome is characterized by mental retardation, behavior disorders, and multiple congenital malformations. Developmental delays, mental retardation, microcephaly, dysmorphic facial findings, cleft palate, bifid uvula, polydactyly, syndactyly of the second and third toes in the form of a “y,” and congenital heart (atrial septal defect, patent ductus arteriosus, and ventricular septal defect) and urogenital system (cryptorchidism, hypospadias and ambiguous genitalia) anomalies are common. The dysmorphic facial findings include bifrontal narrowing, ptosis, epicanthic palpebral fissures, an upturned nose, and anteverted nostrils.4 Our patient had growth and developmental delay, and his parents stated that he had been undernourished since birth. The physical examination showed the common features of SLOS. At presentation, the total cholesterol level was 23 mg/dL, and the 7-hydrocholesterol level was 586 mg/dL. Our patient had been diagnosed with SLOS based on history, physical examination, laboratory findings, and DHCR7 gene mutation screening.

A percutaneous endoscopic gastrostomy catheter can be used for nutrition and feeding of a cholesterol-rich diet. In terms of therapy, cholesterol sup-plementation accelerates somatic growth and decreases the frequency of infections. Recently, statins have been included in the treatment. Cholesterol treatment decreases irritability, self-injury, hyper-activity, and especially autistic behaviors.5 Furthermore, patient growth and developmental delays can improve to an extent, and the speed of neural transmission can increase.6

Liver disease is seen in 2.5% to 16% of patients with cholesterol biosynthesis disorders.7 The liver disorders change from isolated transaminase increases to progressive cholestasis. The cause of liver involvement in SLOS is unclear, and many hypotheses have been suggested. The main factors considered are cellular dysfunction due to multiple organ failure and cholestasis caused by insufficient, poor-quality bile acid production. Hepatocyte damage and fibrosis may be caused by increases in precursor metabolites and their oxidized derivatives.8 Our patient under-went liver biopsy with ultrasonography guidance because of hepatosplenomegaly; when cirrhosis was found, the patient was referred to our center for liver transplant. Initially, we detected an isolated trans-aminase increase (aspartate aminot-ransferase level of 97 U/L and alanine amino-transferase level of 96 U/L).

Calvo and associates9 reported an 8-year-old girl who received a split left liver transplant from a deceased donor because of lathosterolosis, which is another cause of hypocholesterolemia. Post-operatively, her cholesterol levels and neurologic findings improved. Our patient received a living-donor left lateral sector liver transplant and was discharged 15 days posttransplant. Despite cirrhotic liver diagnosis pretransplant, the patient showed normal cholesterol levels after transplant. Thirty-four months after transplant, his mental, neurologic, and developmental parameters showed daily improve-ments, with cholesterol level of 100 mg/dL. In addition, we observed improvements in the patient’s fine motor and hand skills. His social interests have also increased. 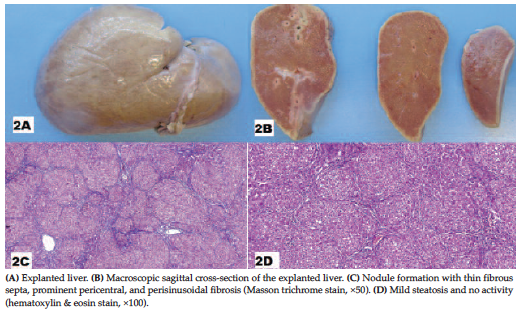