Objectives: The goal when treating patients with end-stage renal disease is to increase patient survival and to provide a better quality of life, both of which can be achieved by kidney transplant. Identifying problems associated with kidney transplant is an essential step toward improved graft function. Here, we evaluated posttransplant erythrocytosis, a frequent complication among kidney transplant recipients.

Results: Both patient groups were comparable regarding age and sex (mean age of 32 years and higher percentage of male recipients in both groups). Degree of HLA class I and class II matching was not significantly different between groups. There were also no significant differences in immunosuppression protocols, although most patients were on steroid and cyclosporine therapy. Prevalence of acute and chronic rejection episodes was comparable between groups. Graft function was better in the posttransplant erythrocytosis group than in the control group, and higher patient survival was noted in patients with posttransplant erythrocytosis (P < .001).

Posttransplant erythrocytosis is defined as a persistently elevated hematocrit level to a level greater than 51% or a hemoglobin level greater than or equal to 16 g/L after renal transplant.2 Post-transplant erythrocytosis usually occurs 8 to 24 months after transplant.3 It usually undergoes spontaneous remission but may occasionally persist for years.4 This condition may remit in association with deteriorating renal function due to chronic rejection.5 Many underlying conditions have been linked to PTE, including male sex, smoking, duration of dialysis, presence of native kidneys, transplant artery stenosis, and type and dose of immunosup-pressive therapy. The presence of good graft function and a rejection-free course predispose patients to the development of PTE.6

All protocols, experimental studies, and clinical trials involving human participants were approved by the ethics committee of the Mansoura Urology and Nephrology Center before start of study. Protocols conformed to the ethical guidelines of the 1975 Helsinki Declaration. Written informed consent was obtained from patients or their guardians.

We retrospectively reviewed all patients with end-stage renal disease who received kidney transplants at the Mansoura Urology and Nephrology Center from January 1990 to December 2012 (1850 patients). Patients who had PTE and had a functioning graft for at least 6 months posttransplant were included in the study (174 patients). A control group was selected from age- and sex-matched renal allograft recipients who received a kidney transplant during the same period of time (174 patients).

Pretransplant evaluation
Through review of medical records, all patients were evaluated before kidney transplant, including type and duration of dialysis, number of blood trans-fusions, history of treatment with erythrocyte-stimulating agents, original kidney disease, and native kidney nephrectomy. Clinical records were examined for any liver and spleen examinations.

Demographic data of donors and recipients
Both the PTE group and the control group were comparable regarding patient age and sex, with no statistically significant differences between groups. Mean age was 32 years, and there was a higher percentage of male recipients in both groups. Regarding donors, the mean age was 35 years and 36.7 years for the PTE group and control group, respectively, with no significant difference (P = .06). Donor sex was also not significantly different between groups (P = .9), although there were more female donors. Consanguinity between donors and recipients was not significantly different (P = .57), with donation from a sibling being the most common (Table 1).

Pretransplant work-up
The degree of HLA class I and class II (DR) was comparable between both groups with no statistically significant differences. Blood group matches were also similar between groups. Original kidney disease in patients from both groups was not significantly different (P = .56), with most patients in both groups having unknown original kidney disease. Regarding pretransplant dialysis, most patients from both groups had hemodialysis before kidney transplant, with mean duration of 10 months for the PTE group and 16 months for the control group (P = .5). Pretransplant hypertension was significantly more prevalent in the PTE group than in the control group (P = .02). Bilateral native kidney nephrectomy was significantly more common in the control group rather than in the PTE group (P < .001). Viral screening results for HBV and HCV were comparable for both groups with no statistically significant differences. The percentage of patients who had blood transfusion or therapy with erythrocyte-stimulating agents before transplant was also comparable between groups (Tables 2, 3, and 4).

Posttransplant complications
Prevalence of posttransplant hypertension, hepatic impairment, and thromboembolic events was comparable between the PTE and control groups; however, posttransplant diabetes was significantly more prevalent in the PTE group (P = .03; Table 6).

Posttransplant erythrocytosis is defined as persistently elevated hematocrit levels above 51%. Among renal allograft recipients, PTE is a frequent phenomenon, occurring in 10% to 20% of recipients. It is often a benign phenomenon, temporary in its course, and may be associated with thromboembolic complications.8

In this retrospective study, our living-donor kidney transplant recipient database was reviewed and patients with PTE were selected for analyses. A similar number of kidney transplant recipients served as the control group, which was matched for age, sex, and time of transplant. In our study, PTE occurred in 174 of 1850 patients who received renal transplants between January 1990 and December 2012. Therefore, the prevalence of PTE in our series was 9.5%, which is similar to previous data.2

As reported previously5,9 and generally con-sidered a predisposing factor, there were more male recipients with PTE than female recipients (95%). This finding is supported by a series of clinical observations that suggested that androgens can promote erythropoiesis.4,8 Men have higher hema-tocrit values than women, and male dialysis patients need less exogenous erythropoietin than their female counterparts to achieve the same target hematocrit level.10,11

In our study, most patients in the 2 groups were treated with hemodialysis before transplant; however, duration of dialysis in patients with PTE was signi-ficantly shorter than shown in the control group. This is in agreement with other studies.6,9

Retaining a native kidney appears to be essential for development of PTE in most cases,4,13 as reported in our study (P < .001). This observation could be explained by excess erythropoietin production by native kidneys.8,14

The reports on the influence of immunosup-pressive therapy on the frequency of PTE are conflicting.The two groups in this study had comparable regimens of induction and maintenance immunosuppression, Some authors have found that PTE occurs more frequently in cyclosporine-treated patients.4,6 Moreover, it was found that different effects and dosages of immunosuppressive agents have no effect on hematocrit or erythropoietin levels.2

Erythrocytosis generally develops in recipients with good renal function13 and with less evidence of acute and chronic rejection,8 and this was the same in our study, as patients with PTE had comparable incidences of acute and chronic rejection episodes versus the control group. In our study, PTE patients had excellent graft function, with mean serum creatinine level of 1.31 ± 0.4 mg/dL at the onset of PTE.

Regarding posttransplant complications, more patients with PTE had posttransplant diabetes mellitus than shown in the control group (P = .03). Diabetes is considered a risk factor for PTE.4,12 Hypertension was common in our PTE group, as also reported by Wickre and associates.15 The prevalence of hypertension in our PTE group was 59%, whereas Basri and associates reported a prevalence of 34.6% in their study.2

As similarly reported by Razeghi and associates,12 PTE did not result in a high incidence of throm-boembolic accidents in our study (3.4%); however, other studies6,8,16 have found that 10% to 30% of PTE patients were at risk for these complications. The lower incidence of thromboembolic complications in our study could be explained by early diagnosis and treatment of PTE.

A number of therapies are available for man-agement of PTE. Because PTE can have a relapsing course, it is suggested that PTE therapy should be pursued indefinitely. At our center, patients with PTE are instructed to maintain good hydration to prevent a secondary further increase in hematocrit levels.8 In our study, PTE was diagnosed early, and most patients were treated with phlebotomy (100 patients). Therapeutic phlebotomies can maintain a hematocrit level of less than 50% and thus minimize the risk of thrombotic complications.6

Theophylline was used to control PTE in 35% of patients. Theophylline acts as an adenosine anta-gonist; adenosine facilitates the release and perhaps the bone marrow response to erythropoietin.18,19 This role was shown in a prospective trial of 8 patients with PTE and 5 normal control patients, in which an 8-week course of theophylline reduced hematocrit levels from 58% to 46% in those with PTE and from 43% to 39% in the control group.20 Another study found that theophylline can lower hematocrit levels by as much as 10% to 15%.21

In this study, patients with PTE had better patient survival (P < .001), similar to that shown in a previous study22 that found that those with erythrocytosis had superior overall survival. However, compared with previous reports on PTE, our study has some novel points. This study highlighted PTE as a serious complication among a large cohort of Egyptian living-donor kidney transplant recipients. These patients were from different age groups, and long-term follow-up data were available. We also found that grafts with double arteries could be an important predisposing factor of PTE and that pretransplant hypertension may be accompanied by PTE if there was associated polycythemia.

Regarding study limitations, we could not measure serum erythropoietin levels or insulin-like growth factor 1 in patient serum, even in those who developed PTE. In addition, serum renin levels were not measured, which could also be involved in the pathogenesis of PTE (and hence the role of angiotensin-converting enzyme inhibitors in the treatment of PTE).

We observed a positive correlation between devel-opment of PTE and male sex, presence of diabetes mellitus, duration of dialysis, retention of native kidneys, and grafts with double arteries. Post-transplant erythrocytosis was correlated with good graft function, and hence patients with PTE have better graft and patient survival outcomes.

From the 1Department of Nephrology, The Urology and Nephrology Center, Mansoura, Egypt; and the 2Department of Nephrology, Zagazig University, Zagazig, Egypt
Acknowledgements: The authors have no sources of funding for this study and have no conflicts of interest to declare.
Corresponding author: Rasha Kamal Abouelenein, Urology and Nephrology Center, Mansoura University, Elgomhoria Street, PO Box 35516, Mansoura, Egypt
Phone: +20502263717
E-mail: dr.rasha40@yahoo.com 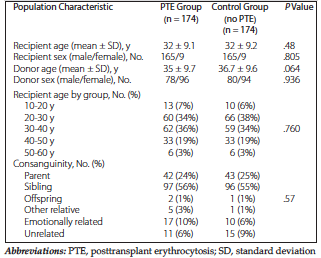 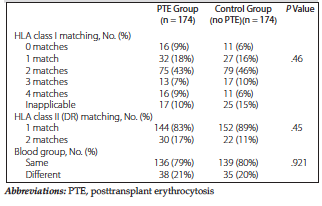 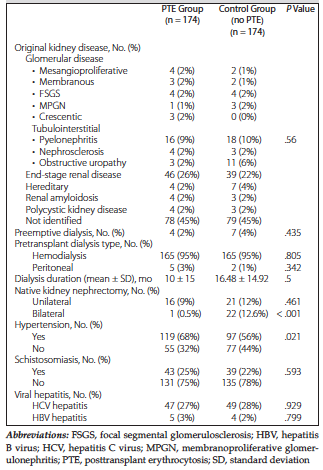 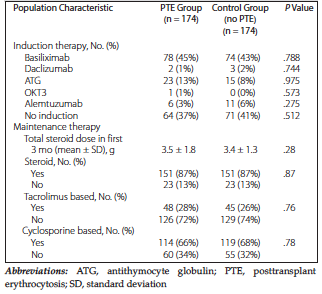 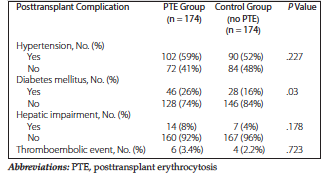 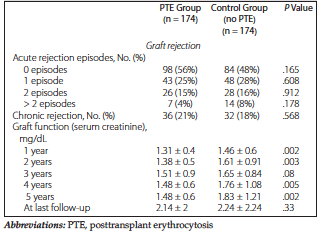 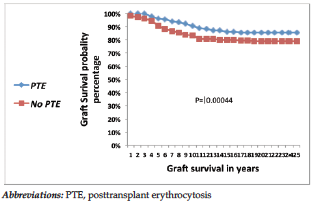 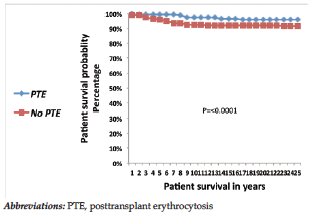