Objectives: This study aimed to compare the effects of N-acetylcysteine and benfotiamine in protection of ovarian tissue from ischemia caused by slow neovas­cularization injury due to intraperitoneal ovarian autotransplant in rats.

Results: Apoptosis was significantly increased in group 2 animals. Primordial follicle count was higher in groups 3 and 4 than in group 2. Vascular endothelial growth factor immunoreactivity was decreased in groups 3 and 4 compared with group 2. Proliferating cell nuclear antigen immunoreactivity was reduced in the secondary follicles in all transplant groups.

Conclusions: In autologous intraperitoneal ovarian transplant, both benfotiamine and N-acetylcysteine are equal and effective agents in protection of ovarian tissue against ischemic injury.

During neovascularization of transplanted ovarian tissue, first ischemia and subsequently reperfusion periods take place. This condition results in overproduction of reactive oxygen species (ROS), which augment endothelial dysfunction, microvas­cular permeability, and tissue swelling. Moreover, they also initiate the inflammatory response and activate adhesion molecules via increased cytokine production.1,2 Production of ROS directly plays a role in oxidative damage of cellular macromolecules, including nucleic acids, proteins, and lipids in ischemic tissue.3 All of these conditions may cause a massive follicular injury in transplanted ovarian tissue.1

N-acetylcysteine (NAC) has been commonly used in clinical applications for years. It is in use as a mucolytic agent, in treatment of ischemia-reper­fusion injury, in treatment of acute respiratory syndrome and bronchitis, in treatment of para­cetamol or heavy metal toxicity, and in treatment of some psychiatric diseases.4 N-acetylcysteine is used as an antioxidant in vivo and in vitro. The acetylated variant of L-cysteine amino acid is an excellent source of sulfhydryl groups and is converted into metabolites that can stimulate the synthesis of glutathione in the body, promote detoxification, and act as free radical scavengers.5

Benfotiamine is the fat-soluble form of vitamin B1. Vitamin B1 that can dissolve in normal water is called thiamine, whereas vitamin B1 that can dissolve in special fat is called benfotiamine. Benfotiamine activates the pentose phosphate pathway by increasing transketolase activity. The activation of this pathway reduces the effects of hexosamine and diacylglycerol/protein kinase C pathways and intracellular advanced glycation end-product pro­duction, which are important causes of vascular damage.6 Benfotiamine stimulates antioxidative defenses through activation of transketolase and protects vascular cells from oxidative stress and apoptosis.7

In this study, we aimed to investigate and compare the beneficial effects of benfotiamine and NAC in protection of ovarian tissue from ischemia-reperfusion injury caused by autologous intrape­ritoneal ovarian tissue in an experimental model.

Sampling
The obtained ovarian tissues were cleaned with cold (+4ºC) 0.9% sodium chloride and dried with tarnishing paper. Tissues were then homogenized for 3 minutes at 16 000 revolutions/min in 0.01 M phosphate-buffered saline solution (1:9 weight/­volume) using a homogenizer (Ultra Turrax Type T25-B, IKA Labortechnic, Staufen im Breisgau, Germany). Homogenization was performed on ice, with supernatants obtained by centrifugation at 5000g for 1 hour (at +4ºC). Malondialdehyde levels were then determined in each supernatant.

Determination of malondialdehyde levels
Malondialdehyde levels were determined based on the coupling of malondialdehyde with thiobarbituric acid at +95°C. Determination of lipid peroxidation depends on the spectrophotometric measurement at 532 nm of the pink complex obtained by incubation of 0.8% thiobarbituric acid with tissue homogenate in boiling water bath for 1 hour under aerobic conditions at pH 3.5. For the measurements, we used standard 1,1,3,3-tetraethoxypropane. Results are shown in nmol/mL.

Analysis of apoptosis
Ovarian tissue apoptosis was analyzed by using a terminal deoxynucleotidyl transferase-mediated deoxyuridine-biotin nick end-labeling (TUNEL) assay. In brief, 4- to 6-μm-thick sections obtained from paraffin blocks were applied to polylysine slides. Apoptotic cells were identified using Apop Tag plus peroxidase in situ apoptosis detection kits (Chemicon International, Billerica, MA, USA) in accordance with the manufacturer’s instructions. Preparations were reviewed, evaluated, and photographed with a research microscope (Olympus BH-2, Münster, Germany). In the evaluation of TUNEL staining, nuclei stained with Harris hematoxylin blue were normal, whereas brown nuclear staining was interpreted as representing apoptotic cells. At ×10 magnification in randomly selected areas, we counted at least 500 normal and apoptotic cells. The proportion of apoptotic cells compared with the total (normal/apoptotic) number of cells was calculated as the apoptotic index (100 × [mean number of TUNEL positive cells in 10 random fields]/[mean number of total cells in 10 random fields]).11

Histologic evaluations
The ovarian tissues from each group were embedded in paraffin blocks after they had been fixed with 10% formaldehyde. Sections of 4- to 6-μm thickness were obtained and stained with Masson trichrome dye and hematoxylin and eosin and analyzed under a microscope. Fibrosis was assessed with Masson trichrome staining and scored from 0 to 3 semi-quantitatively12 as follows: 0 = no fibrosis, +1 = low fibrosis, +2 = intermediate fibrosis, and +3 = severe fibrosis. To calculate ovarian reserve, ovarian follicles were defined per Mazaud and associates.13

Immunohistochemical staining of vascular endothelial growth factor
In our evaluation of VEGF immune staining in ovarian tissue, the VEGF immunoreactivity score in ovarian tissue was significantly increased in group 2 compared with that shown in groups 1, 3, and 4 (P < .05). Scores were not significantly different for groups 1, 3, and 4 (P > .05; Table 5 and Figure 4).

In our study of the protective effects of benfotiamine and NAC against tissue damage after autotransplant in rats, we found that both of these agents could protect the affected ovaries from ischemic injury. Especially at the last phases of transplant, removal of ischemic damage during early neovascularization will have beneficial effects in maintaining ovarian function.

After autotransplant, rapid reconstruction of blood vessels in ovarian grafts is highly important to prevention of ischemic injury and reduction of follicular reserve.16 Four weeks after transplant, proliferative primordial granulosa cells and neo-meiocytes were reported to be lost. Augmented apoptosis, which was associated with the transplant method, was determined to continue for 45 days.17 Mahmoodi and associates18 reported that the mean number of primordial, primary, preantral, and antral follicles were significantly decreased in both their NAC-treated and transplant groups compared with their control group. However, primordial, primary, preantral, antral, and total follicle numbers were determined to be significantly increased compared with the transplant group that received saline. Similarly, in our study, we determined that primary, secondary, and tertiary follicle and corpus luteum numbers were similar in all groups. However, the number of primordial follicles was decreased in our transplant groups compared with that shown in the control group, although the number was significantly higher in the groups that received NAC and benfotiamine compared with the transplant-only group. We suggest that the decrease in the number of primordial follicles in our transplant groups may be caused by the acceleration of follicular maturation due to the ovarian vasectomy.17

In solid-organ transplant, exogenous antioxidants work to extinguish the free radicals and to protect the organs. Both ascorbic acid and mannitol have been shown to be effective in diminishing surgically induced ovarian ischemic damage in a rat model.19 Melatonin has been shown to diminish necrosis in intraperitoneal ovarian grafts with antioxidant effects.20 Benfotiamine was previously shown to normalize ROS, which were produced in high amounts in endothelial cells of diabetic rats.6 Another study showed that it could reduce oxidative stress in streptozotocin-induced diabetic rats.21

N-acetylcysteine has been shown to diminish oxidative stress and to play an important role in ischemia-reperfusion injury by inhibiting induction of preinflammatory cytokine production.2 Moreover, NAC also plays an important role in clearing free oxygen radicals and increasing intracellular glu­tathione concentration.22 In our study, we found malondialdehyde levels to be increased significantly in the transplant group. This finding also shows that transplant upsets the oxidant/antioxidant balance in ovaries in favor of oxidative damage. However, both benfotiamine and NAC decreased malondialdehyde levels. Thus, the defective oxidant/antioxidant balance shifts in favor of antioxidants, demonstrating the protective effects of NAC and benfotiamine. Increased fibrosis, necrosis, and apoptosis shown in our transplant groups compared with the control group were likely due to the apoptotic effects of chronic hypoxia.23 In our study, the mean apoptosis score in TUNEL-positive follicular cells was significantly lower in the groups that received NAC or benfotiamine compared with the transplant-only group. We could not find any information on the use of benfotiamine in transplant in the literature. However, this finding is in line with previous results on the inhibitory effects of NAC with regard to apoptosis.2,18

Regarding PCNA staining in follicles from ovarian graft tissue, David and associates24 reported that human ovaries from fresh and frozen-thawed grafts showed PCNA positivity in 13% to 14% of primordial follicles. They also suggested that, despite follicular activation, silent follicles were maintained. In our study, in ovarian graft tissue, PCNA immunoreactivity was significantly decreased in the secondary follicles of all groups. In our transplant groups, granulosa cells of primordial and primary follicles showed unremarkable staining. In oocytes of primordial and primary follicles of the control group, the staining was more prominent; however, in the groups that received NAC or benfotiamine, the staining in oocytes was less prominent. The transplant-only group showed no staining. This finding also shows us that transplant can suppress the proliferation of granulosa cells and oocytes in primordial and primary follicles at follicular development. Furthermore, we suggest that NAC and benfotiamine can protect follicular proliferation in ovarian graft tissue.

Vascular endothelial growth factor is an angi­ogenic factor with well-known effects on migration, proliferation, and differentiation of endothelial cells; on production of immature veins; and on vascular permeability.25 Augmented oxidative stress has been shown to be associated with disturbed angiogenesis signals.26 In an ischemia-reperfusion model in rats produced by portal vein ligation, Licks and associates27 reported that, in the ligated groups, VEGF expression increased but NAC application caused a decrease in VEGF expression compared with the ligated-only group. Zhu and colleagues28 showed that 5 months of NAC treatment down-regulated VEGF expression in a rat model of diabetic retinopathy and suggested that this effect was associated with the lessening effects of NAC on ROS. In our study, we also determined that VEGF immuno­reactivity scores were significantly decreased with NAC treatment compared with the transplant-only group.

Kihm and associates29 showed that, in all perito­neal regions of rats under peritoneal dialysis, significantly denser vasculature and more VEGF immunostaining were present compared with their control group. However, vascularization and VEGF staining were decreased in their benfotiamine-treated group. Katare and colleagues30 determined that, in peri-infarct regions of hearts of streptozotocin-induced type 1 diabetic rats, there were less capillaries and arterioles than in hearts of nondiabetic rats. They showed that benfotiamine treatment (70 mg/kg/day in drinking water for 4 weeks) significantly improved the peri-infarct vascularization at the capillary and arteriole levels. Benfotiamine was also shown to decrease oxidative stress and phosphorylation/activation of VEGF receptor-2 and Akt. We also determined that benfotiamine treatment significantly decreased VEGF immunoreactivity scores compared with results shown in untreated groups.

A strength of our study is the first use of benfotiamine in a transplant model. However, we had a limited number of animals, and an experimental animal model cannot completely mimic a human disease.

In conclusion, in autologous intraperitoneal autotransplant in rats, benfotiamine and NAC were shown to be effective agents in protection of ovarian tissue against ischemia-reperfusion injury. 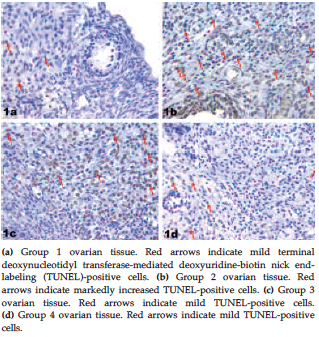 Figure 1. TUNEL-Positive Cells in All Groups 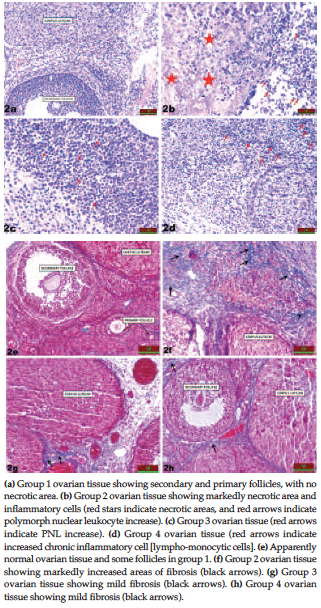 Figure 2. Necrosis, Polymorph Nuclear Leukocytes, and Fibrosis in All Groups 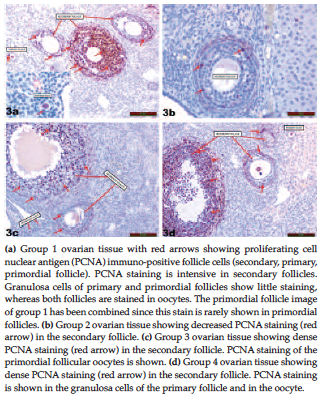 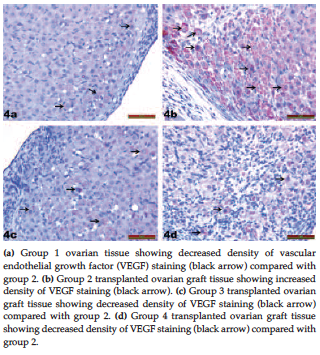