Objectives: The association between end-stage renal disease with atrial fibrillation and ventricular arrhythmias is well documented. The aim of this study was to investigate whether kidney transplant has any effect on P-wave dispersion, a predictor of atrial fibrillation and corrected QT interval dispersion, T-wave peak-end interval, and T-wave peak-end/corrected QT ratio, which are predictors of ventricular arrhythmias in patients with end-stage renal disease.

Results: We observed a statistically significant decline in P-wave dispersion, corrected QT dispersion, T-wave peak-end interval, and T-wave peak-end/corrected QT ratio values among the pretransplant and 3-, 6-, and 12-month posttransplant measurements (P < .001 for all comparisons). However, the values of these measurements in the transplant group at 12 months were significantly higher than baseline values of the control group (P < .001 for all comparisons).

Conclusions: P-wave dispersion, corrected QT dispersion, T-wave peak-end interval, and T-wave peak-end/­corrected QT ratio were shown to be attenuated after transplant, although they remained higher than baseline measurements in healthy individuals. These results indirectly offer that there may be a reduction in risk of atrial fibrillation and ventricular arrhythmias after transplant.

Chronic kidney disease (CKD) is regarded as a public health problem worldwide, with an estimated prevalence of about 8% to 16%. Despite develo­pments in diagnosis and treatment, mortality associated with CKD has shown a progressive increase worldwide in recent years.1 The main cause of mortality in patients with end-stage renal disease (ESRD) undergoing hemodialysis or peritoneal dialysis is cardiovascular disease.2 The prevalence of atherosclerotic coronary heart disease in particular, as well as atrial fibrillation (AF), ventricular arrhythmias, and risk of sudden cardiac death, is higher in patients with ESRD than in the general population.3-5 In patients with ESRD, renal transplant yields the best outcomes among renal replacement therapies in terms of survival. Cardiovascular mortality rates in patients who receive renal transplant are lower than in ESRD patients who do not undergo transplant, although rates are still higher than in healthy individuals.6

P-wave dispersion (PWD) is the difference between the durations of the widest and the narrowest P waves in a 12-derivation electrocardiogram (ECG). P-wave dispersion has a well-known role in indicating atrial remodeling and predicting AF.7 In a similar fashion, QT interval dispersion (QTD) is defined as the difference between the durations of the longest and the shortest QT intervals in a 12-derivation ECG. QT interval dispersion has been shown to predict ventricular arrhythmias and sudden cardiac death.8 It was recently shown that the duration between the 2 points where the T wave makes a peak and where it ends (Tp-e interval) has a role in indicating total dispersion and ventricular repolarization.9 In addition, the role of the ratio between Tp-e interval and corrected QT interval (CQT) in predicting ventricular repolarization anomalies and ventricular arrhythmias is well known.10

From the 216 patients, 9 patients did not attend regular follow-up visits, 24 patients did not have follow-up ECG examinations, 14 patients died, 23 patients were younger than 18 years old, 14 patients developed serious rejection that required renal replacement treatment, and 2 patients developed coronary artery disease during follow-up after renal transplant. These patients were excluded from the study, with the remaining 125 patients included in the study. Patient clinical, demographic, anthropometric, and laboratory data were recorded. The ECG recordings performed before transplant and at 3, 6, and 12 months after transplant were examined and compared in terms of PWD, corrected QTD (CQTD), Tp-e interval, and Tp-e/QT ratio. The control group consisted of 109 apparently healthy individuals with similar demographic characteristics as the study group. The same parameters were also calculated in the control group, and the 12-month values of the transplant patients were compared with baseline values of the control group.

Electrocardiographic features
We retrospectively reviewed standard (25 mm/s, 10 mm/mV) 12-derivation ECGs of all patients. All ECG recordings were scanned and recorded as digital media. The images were magnified ×400 using Adobe Photoshop software to minimize errors during measurements. All measurements were performed twice by 2 separate cardiologists who were blinded to the kidney transplant and control groups. For each parameter, measurements were made from 3 consecutive beats in every derivation, and the average of these measurements was recorded. P-wave dispersion was measured by calculating the difference between the durations of the widest and the narrowest P waves in the ECG. QT interval was measured as the interval between the start of the Q wave and the end of the T wave. Corrected QT according to heart rate was calculated using the Bazett formula: CQT = QT√ (R-R interval). The Tp-e interval was measured in precordial leads by calculating the interval between the point where the T wave makes a peak and where it ends. The Tp-e/CQT ratio was calculated from these parameters.

Statistical analyses
Variables are presented as means and standard deviation or median (range, interquartile range) for continuous data and as proportion for categorical data. The Kolmogorov-Smirnov test was used to identify whether continuous variables were normally distributed. Categorical parameters were analyzed with chi-square test. Continuous variables with normal distribution were analyzed with unpaired t test. Repeated-measures analyses of variance were used to compare values of transplant recipients during the follow-up period. Unpaired t tests were used to compare the 12-month values of the transplant group with the baseline values of the control group. A 2-sided P < .05 was accepted as significant. Statistical analysis was performed using SPSS version 21.0 for Windows (SPSS, Inc., Chicago, IL, USA).

Figure 1 shows changes in PWD, CQTD, Tp-e interval, and Tp-e/CQT in transplant recipients during the follow-up period and baseline values of the control group.

Our study is the first to examine posttransplant PWD, CQTD, Tp-e interval, and Tp-e/CQT ratio values in patients with renal failure. According to our results, PWD, CQTD, Tp-e interval, and Tp-e/QT ratio decreased significantly in kidney transplant recipients during posttransplant follow-up. However, these parameters were still high at the end of month 12 posttransplant versus baseline levels in our control group. These results suggest that, although patients with chronic renal failure may have reduced risk for AF and ventricular arrhythmia after transplant, they may still have higher risk than healthy individuals.

Atrial fibrillation is a common arrhythmia in patients with ESRD. The estimated prevalence of AF among patients with ESRD is between 10.7% and 14.5%. Patients with ESRD and AF have higher mortality and morbidity than those without AF.11 Similarly, ESRD patients with AF have poorer outcomes after transplant than patients without AF. Graft rejection, ischemic stroke, and all-cause mortality are more frequent in patients who have AF before transplant.12 In one study that investigated the risk of AF after kidney transplant, La Manna and associates reported that 8.2% of patients developed at least 1 episode of AF after transplant. The authors found that age, history of previous myocardial infarction, and concurrent liver transplant with kidney transplant were risk factors for AF development.13 In another study, Lentine and associates found that risk of AF development was 3.6% and 7.3% at 12 and 36 months after kidney transplant. In that study, age, male sex, history of coronary artery disease, history of renal failure secondary to hypertension, and pretransplant dialysis time were determined as risk factors for de novo AF development.14 Both studies showed that risk of AF development in kidney transplant patients was lower than in patients who did not receive a transplant but higher than the risk in healthy individuals. In our study, we did not evaluate posttransplant AF risk directly; however, the role of PWD in predicting AF and other atrial tachycardias is well established.7 Our results showed significantly reduced PWD after transplant, although values were still higher than shown in our healthy control group. These findings are in agreement with the literature.

There are some limitations to our study. First, there was no standardization of ECG examinations as to whether they were performed before or after dialysis. Dialysis may influence ECG findings by causing changes in electrolyte levels. Second, we indirectly evaluated arrhythmia risk in the present study, and there may be silent arrhythmias that were not felt by the patient or detected by the clinician. Third, the study included a relatively small number of patients, and the follow-up period was short. Larger-scale prospective studies with long-term follow-up would provide more valuable information. Fourth, ECG measurements were performed manually, and there may be interobserver variations in operator-dependent measurements. To minimize these variations, 2 separate cardiologists evaluated all ECGs, and the average of the 2 measurements was taken into account.

P-wave dispersion, CQTD, Tp-e interval, and Tp-e/CQT ratio were shown to be attenuated after transplant, although they remained higher than shown in the healthy control group. These results indirectly offer that there may be a reduction in risk of AF and ventricular arrhythmias after transplant. 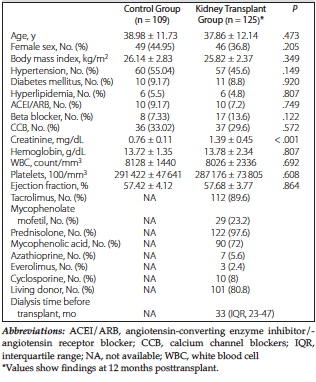 Table 1. Baseline Clinical and Demographic Characteristics of the Study Population

Table 2. Comparison of Electrocardiogram Results in Kidney Transplant Recipients During Follow-Up and Comparisons of Month 12 Values Versus Baseline Values in Control Group 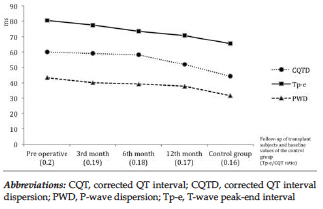 Figure 1. Changes in Electrocardiogram Variables in Kidney Transplant Recipients During Follow-Up Posttransplant and Versus Baseline Value of Control Group