Posterior reversible encephalopathy syndrome (PRES) is a rare condition of the central nervous system that may occur in adults and in children.1 Clinically, it presents itself with mental status changes, visual loss, headaches, seizures, or coma.2 Implicated causative factors include hypertensive encephalopathy, renal failure, preeclampsia, auto­immune conditions, and the use of cytotoxic or immunosuppressive agents. Although its patho­physiology remains obscure, leaks in the cerebral arterioles due to hyperperfusion and injury of the vascular endothelium have been proposed to play roles in its development.3 In cranial computed tomography or magnetic resonance imaging (MRI), this condition demonstrates a typical appearance due to vasogenic edema in occipital or parietal lobes.

Tacrolimus, an immunosuppressive agent, is increasingly being used to prevent graft rejection after organ transplant, particularly after solid-organ or bone marrow transplant procedures.4 Few cases of tacrolimus-associated PRES have been previously documented.2 A patient with PRES may recover without sequela after removal of the causative factors. However, PRES may lead to high mortality or morbidity when diagnosis is delayed. In patients experiencing this complication, the dose of the immunosuppressive agent is reduced or totally discontinued.5

A 66-year-old male patient with a preoperative Model for End-Stage Liver Disease score of 16 underwent deceased-donor liver transplant due to liver cirrhosis and hepatocellular carcinoma, which developed in the background of chronic hepatitis B infection. An immunosuppressive regimen con­taining tacrolimus, steroids, and mycophenolate mofetil was commenced postoperatively. During his postoperative course, he had no significant problems other than a mild increase in bilirubin levels. Three months after transplant, his vision became impaired and he had a continuous headache. He had no history of renal failure or hypertension, which could have played a causative role in the development of PRES.

At the time of admission, he had stable vital signs, blood pressure of 110/70 mm Hg, heart rate of 85 beats/min, temperature of 36.7°C, and respiratory rate of 16 breaths/min. Complete blood count and biochemistry test results were within normal ranges. International normalized ratio (INR) was 1.2, and platelet count was 161 × 103/μL. Sodium level was 132 mEq/L, potassium was 3 mEq/L, and mag­nesium was 2.5 mg/dL.

One day after admission, he developed mental confusion and generalized tonic-clonic seizures. A cranial MRI showed cortical-subcortical hyperin­tense areas in the posterior parieto-occipital lobes bilaterally in the T2 images (Figure 1). A tacrolimus-associated PRES was suspected, immunosuppressive agents were discontinued, and steroids at a dose of 60 mg twice per day were started. During his clinical course, tacrolimus levels never reached the toxic range (0.6-11.8 ng/dL), and he had no episodes of hypertension. The tacrolimus level at the time of diagnosis was 4.8 ng/dL. Supportive therapy was commenced, and the patient was transferred to the intensive care unit, where his general condition worsened and respiratory failure occurred. On day 13 day after admission to the intensive care unit, the patient died.

Compared with other organ transplant procedures, higher proportions of patients undergoing liver transplant experience neurologic complications (around 28%) due to a number of factors, including poor clinical condition (malnutrition, electrolyte imbalance, and coagulopathy), presurgical enceph­alopathy, and the need for prolonged and complex surgery. Posterior reversible encephalopathy syn­drome comprises only 1% of these neurologic complications.2

Previous studies have suggested that the risk of PRES is at its highest 3 months after liver transplant, with 84% of cases occurring during this period.2,6 Consistent with these reports, our patient also developed PRES 3 months after transplant. Again in line with previous observations, our patient had visual disturbance, seizures, and confusion, which are among the most commonly reported symptoms. Convulsions occurred after the minor symptom of visual disturbance, as described by other authors.2,5,6 At the time of diagnosis of PRES, he also had a urinary tract infection. Of the previously reported cases of PRES, 79% were also found to have a diagnosis of an infection.2 At the time of diagnosis, the sodium concentration in this patient was 132 mEq/L. Hyponatremia and hypomagnesemia have been reported to occur in 37% and 58%, respectively, of patients with PRES. Our patient had a normal magnesium concentration of 2.5 mg/dL. In a report from Cruz and associates, the mortality rate was 42% (8/19) in a group of patients diagnosed with PRES.2

Elevated INR and/or reduced platelet count has been implicated in cerebral hemorrhage occurring in patients with PRES (INR > 2 and/or platelet count < 100 × 103/μL). At the time of diagnosis, our patient had both normal INR and platelet values.

The diagnosis of PRES is made through neuroradiologic imaging studies rather than clinical examination. The most important sequence in the PRES protocol in MRI is the turbo fluid-attenuate inversion recovery, which is a T2-weighed sequence showing the typical edema in the occipital and parietal lobes, in the subcortical white matter, and sometimes in the cortex. In more severe cases, edema may also occur in the posterior frontal or temporal lobes, deep white matter, pons, cerebellum, and in other locations.2,5

In patients with tacrolimus-induced PRES, the medication dose is reduced or completely discon­tinued.5,6 Although a switch to therapy with everolimus and mycophenolate mofetil has been proposed after discontinuation of tacrolimus, PRES cases that develop due to everolimus have also been reported.6

After diagnosis, patients are followed up with MRI, which may show improvement in brain lesions. However, complete disappearance of the lesions in the pons and in the temporal, parietal, and occipital lobes is unlikely.5

Posterior reversible encephalopathy syndrome is a rare neurologic adverse effect of calcineurin inhibitors with poorly understood clinical features. The mechanisms underlying neurotoxicity remain unclear and controversial. Calcineurin inhibitor-associated PRES has a generally favorable prognosis with early diagnosis and prompt treatment, including alternating or discontinuing calcineurin inhibitors and blood pressure control.7,8 A well-recognized phenomenon is that immunosuppressant blood levels do not appear to correlate with PRES, and some patients have experienced permanent or even fatal neurologic damage even after dose reduction or discontinuation.8

Neurologic complications after liver transplant are not uncommon, although PRES represents a rare neurologic complication that can occur after this procedure. Delays in diagnosis and treatment are associated with increased morbidity and mortality. The possibility of PRES should be kept in mind in the differential diagnosis of patients developing neurologic symptoms after liver transplant. 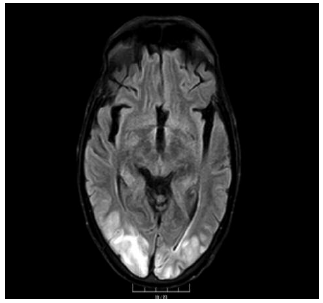