Results: At a median follow-up period of 16 months, the estimated 2-year progression-free survival rates for the TECAM and BEAM groups were 55.7% and 52.9%, respectively (P = .811). The estimated 2-year overall survival rate in the TECAM group (55.9%) was relatively inferior to that shown in the BEAM group (67%), but the differences were not significant (P = .238). No differences were observed for time to hematopoietic recovery and duration of hospitalization. Incidences of transplant-related infectious and noninfectious com­plications were similar for each conditioning regimen.

Conclusions: Our experience shows that the TECAM regimen is an effective high-dose chemotherapy for lymphoma patients before autologous hematopoietic stem cell transplant.

Despite it usually being a chemotherapy-sensitive malignancy, many patients with aggressive lym­phoma either relapse or never achieve remission.1-3 High-dose treatment followed by autologous hematopoietic stem cell transplant (HDT/AHSCT) is considered the standard therapy for patients with relapsed/refractory (R/R) non-Hodgkin lymphoma (NHL) and Hodgkin lymphoma (HL).4,5 It is also applied as first-line consolidation for some patients with NHL who are medically fit to undergo transplant.6

The best conditioning regimen before AHSCT in patients with R/R lymphoma is still undefined. The carmustine, etoposide, cytarabine, plus melphalan (BEAM) regimen is still routinely used in R/R NHL and HL. Here, we retrospectively analyzed our single-center experience with lymphoma patients who had undergone HDT/AHSCT and received the thiotepa, etoposide, cyclophosphamide, cytarabine, plus melphalan (TECAM) or the BEAM conditioning regimen.

Patients
The clinical and laboratory records of all consecutive R/R NHL and HL patients who were treated with HDT/AHSCT between October 2012 and February 2017 were retrospectively analyzed (N = 108). Only patients younger than 18 years old were excluded. All patients gave informed consent for all aspects of HDT/AHSCT.

Study design
This was a retrospective, single-center, non-interventional study designed to evaluate the efficacy and tolerability of TECAM conditioning regimen in patients with R/R lymphoma who had been treated according to standard clinical practice. The study was approved by the Local Ethics Committee of Ege University (01.12.2016/ 16-11.1/5).

Patients received subcutaneous granulocyte colony-stimulating factor (5 μg/kg/day) from day +3 of HDT/AHSCT until neutrophil engraftment (> 500/mm3). Platelet transfusions were given if platelet counts were < 20 000/mm3 without risk factors for bleeding. Erythrocyte suspensions were given to patients with anemia-related symptoms or hemoglobin values below 8 g/dL. All patients received fluconazole at 400 mg/day, and acyclovir at 1200 mg/day until neutrophil engraftment. The engraftment of peripheral leukocytes and platelets was defined as a leukocyte count of ≥ 0.5 × 109/L and a platelet count of ≥ 20 × 109/L on 2 consecutive days.

Evaluation of clinical response and toxicity
Response to treatment and HDT-related adverse events were evaluated according to the International Workshop Criteria7 and the Common Terminology Criteria for Adverse Events (version 4.03).8 Response evaluations were based on physical examinations and radiologic tests.

Definition of outcomes
Progression-free survival (PFS) was measured from the date of the HDT/AHSCT until either disease progression or death from any cause. Overall survival (OS) was measured from the start of HDT/AHSCT until either death from any cause or the last date of patient follow-up. Nonrelapse mortality (NRM) and relapse rate (RR) were defined as the time to death without relapse/progression and time to relapse, respectively.

We used SPSS software (version 18.0; SPSS Inc., Chicago, IL, USA) for analyses. Comparisons of categorical variables in groups were tested by chi-square or Fisher exact tests. The final follow-up was completed on May 15, 2017, and OS and PFS were estimated with the Kaplan-Meier method and calculated from the day of peripheral blood hematopoietic cell infusion until the date of final follow-up examination. Associations between clinical parameters and survival were evaluated using Cox univariate and multivariate analyses.

Nonrelapse mortality and RR were considered to be competing events. Cumulative incidence curves that considered the competing risk structure of the event were estimated for NRM and RR. The statistical significance of the difference in the cumulative incidences of competing events between TECAM and BEAM was assessed by the Gray test. Hazard ratio was estimated using Fine-Gray proportional hazard regression model for RR. These statistical analyses were performed using EZR (Easy R) (http://www.jichi.ac.jp/saitama-sct/SaitamaHP. files/statmed.html).9 All P values were two-sided, and P < .05 was considered statistically significant.

Hematologic reconstitution
No differences were observed in the number of infused CD34-positive cells, the time to hematopoietic recovery, and duration of hospitalization, according to the conditioning regimen used (Table 2).

Regimen-related toxicity
The incidence of transplant-related infectious and noninfectious complications was similar for the 2 conditioning regimens (Table 3). Infections were well-controlled with antibiotics and resolved after engraftment. Noninfectious complications resolved after neutrophil recovery. We observed no differences in treatment-related mortality rates at day 100 between the groups (P = .728). Causes of death after HDT/AHSTC included relapse/progression (4 patients), allogeneic stem cell transplant-related (3 patients), sepsis (1 patient), and unknown (2 patients) in the TECAM group and relapse/progression (15 patients), sepsis (2 patients), and unknown (2 patients) in the BEAM group.

High-dose treatment followed by autologous hema­topoietic stem cell transplant is considered the standard regimen for patients with R/R lymphoma.4,5 Regarding conditioning, BEAM is the preferred and widely used regimen. Because of the limited availability of carmustine, alternative regimes to BEAM were needed. Thiotepa is an alkylating agent approved for conditioning before AHSCT. Conditioning regimens containing thiotepa are used in primary central nervous system lymphoma or in systemic NHL patients with central nervous system involvement.10-13 The efficacy of these thiotepa-based conditioning regimens suggested that TECAM might be an alternative for lymphoma patients except for those with primary central nervous system lymphoma. Therefore, in this retrospective study, we evaluated transplant-related factors and compared the efficacy and toxicity of TECAM versus BEAM as conditioning regimens in patients with R/R lymphoma.

In our study, HL patients had longer OS than NHL patients with heterogeneous distribution, but we observed no statistical significance in PFS between NHL and HL patients. Longer OS in HL patients may be explained by the inclusion of several new drugs (such as brentuximab and nivolumab) and reduced-intensity conditioning allogeneic stem cell transplant in the treatment of patients with R/R HL.

Our results clearly demonstrate that patient outcome is dependent on disease status at the time of HDT/AHSCT. Satwani and associates, who defined risk factors that predicted PFS following HDT/AHSCT in R/R HL patients, found that chemoresistant diseases at the time of HDT/AHSCT were a predictor of poor survival.14 This finding suggested that the upfront HDT/AHSCT conso­lidation may be important during the first complete remission of patients with high-risk lymphoma.

It is important to identify lymphoma patients upfront who might be at a higher risk of relapse after HDT/AHSCT. Results of studies showed that induction chemotherapy followed by consolidative HDT/AHSCT remains the standard of care at most institutions for young and fit patients with mantle cell lymphoma.15-17 Kaneko and associates also stated that upfront HDT/AHSCT for patients with higher-risk diffuse large B-cell lymphoma during the first complete remission may result in better outcomes.18 Nevertheless, previous studies have shown that no benefit from an early intensification with HDT/AHSCT was obtained in patients with high-risk/advanced HL.19,20 Therefore, the impact of this strategy is controversial. This is a rapidly evolving area, and future research studies will help clarify indications for frontline consolidation.21,22

Improvements in response rate and OS remain the main aim in the treatment of R/R lymphoma. There are few data to guide the selection between the various HDT regimens available before AHSCT for patients with NHL and HL. Chen and associates analyzed the effects of several commonly used HDT regimens (BEAM; low cyclophosphamide, BCNU, plus etoposide [CBV]; high CBV; busulfan plus cyclophosphamide; and total body irradiation) for AHSCT. They found that BEAM showed the best outcomes for patients with HL, and CBV was found to be associated with a lower mortality in follicular lymphoma compared with BEAM.23 The use of TECAM started in our center because carmustine could not be accessed. Therefore, more patients received HDT/AHSCT in the BEAM group versus the TECAM group. In addition, after May 2015, the BEAM regimen was no longer used at our institution. No significant differences for any safety and efficacy endpoints could be demonstrated between TECAM and BEAM regimens. In a retrospective study of European Society for Blood and Marrow Transplantation data from Sellner and associates, analyses of 535 thiotepa-treated and 1031 BEAM-treated patients with diffuse large B-cell lymphoma (excluding primary central nervous system lymphoma), follicular lymphoma, or HL (who were matched in a 1-to-2 ratio for final comparison) showed that thiotepa-based HDT might be a valuable alternative to BEAM in these patients.24 Rosenberg and associates investigated the toxicity and efficacy between TECAM and BEAM in 146 NHL patients and demonstrated that there was no statistically significant difference in PFS or OS.25 In our study, our data were similar to those reported in the literature. These findings suggest that the TECAM regimen may be an alternative to the BEAM regimen. However, in our study, groups for comparison, in addition to their relatively small sample size, were unevenly distributed. Hence, these results need further evaluation.

The treatment-related mortality of TECAM and BEAM groups were 11.1% and 8.3%, respectively. However, in a study from Chen and associates,23 these results were higher. Therefore, the quality of supportive care and infection control programs should be improved in our center.

We found the TECAM conditioning regimen to be safe, well-tolerated, and effective in the treatment of R/R lymphoma in real-life clinical practice in our center. However, we still cannot draw a conclusion, especially when considering the heterogeneous distribution of patients, the small sample sizes, and short follow-up. Large, prospective, and randomized clinical trials are needed to prove the value of novel conditioning regimens.

From the 1Department of Hematology and the 2Department of Public Health, Ege University, Faculty of Medicine, Izmir, Turkey
Acknowledgements: All authors contributed equally to this work. The authors declare that there is no conflict of interest, including specific financial interests, relationships, and/or affiliations relevant to the subject matter or materials discussed in this article. This study was accepted as a poster presentation at EHA 2017 held in Madrid, Spain.
Corresponding author: Pusem Patir, Ege University, Faculty of Medicine, Department of Hematology, 35100, Izmir, Turkey
Phone: +90 5392730483
E-mail: pusemp@yahoo.com 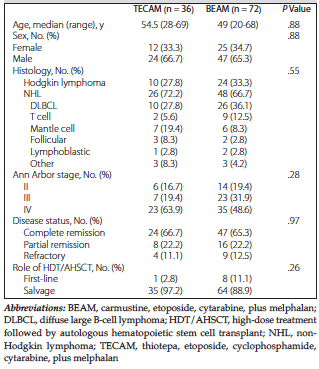 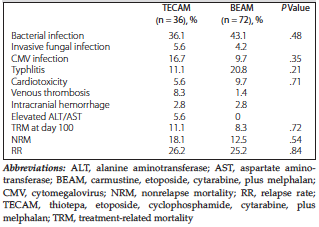 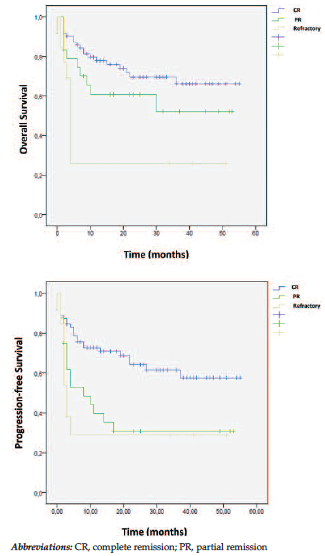 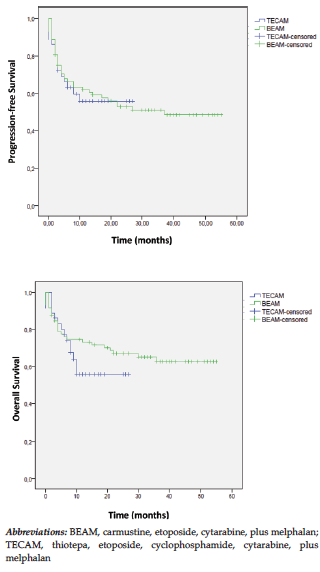 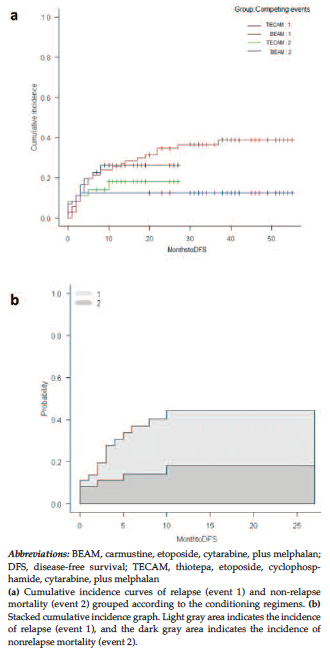