Materials and Methods: Fifty-nine transplant patients were seen by the Department of Child and Adolescent Psychiatry between 2012 and 2015 and were evaluated based on the Diagnostic and Statistical Manual of Mental Disorders, 4th Edition.

In this study, we reviewed the psychiatric consultation records of child and adolescent patients presenting to Başkent University Hospital who underwent or were scheduled to undergo transplant to determine the prevalence of psychiatric disorders in this population. We hoped to provide a better understanding of the transplant process in children and adolescents to help them cope with the difficulties related to this process and provide emotional help and support.

In this study, we retrospectively reviewed the medical records of 59 patients presenting to Başkent University Hospital before and/or after transplant who consulted with the Department of Child and Adolescent Psychiatry between 2012 and 2015. Sociodemographic characteristics, diagnoses, transplanted organs, psychiatric histories, family histories, and the personal histories of the patients were reviewed. If a patient had been seen before transplant, we investigated the extent to which the patient and his/her family knew about the transplant process and the illness that caused the need for transplant. We also examined the motivation of the patient and his/her family with regard to transplantation and treatment adherence and reviewed the psychiatric history of the patient and his/her family. Data on substance abuse history, family environment, psychosocial support, and relationship with the medical team were also collected. If the medical team detected a problem related to any of these items, the patient was reinvestigated after transplant. We also performed a mental status examination on the patient's current state of mind, including appearance, attitude, behavior, speech, mood and affect, thought processes, thought content, perception, impulse control, cognition (including example orientation, memory, and concentration), insight, and judgment.

The psychiatric disorders of the patients were diagnosed based on the Diagnostic and Statistical Manual of Mental Disorders (4th edition). Patients with suspected cognitive problems were assessed using the Wechsler Intelligence Scale for Children-Revised.

Statistical analyses
Sociodemographic data, diagnosed disorders, transplanted organ, disease duration, time from transplant, psychiatric diagnoses, and treatment modality were analyzed using descriptive statistics. The Bonferroni test was used to examine differences related to the identity of the transplanted organs. The relationship between the use of living-donor or deceased-donor organs and psychiatric disorders was examined by Spearman correlation analysis. Comparative analyses were performed with the independent-samples t test, and a P value < .05 was considered significant. The SPSS 16.0 statistical software package (SPSS Inc., Chicago, IL, USA) was used for all statistical calculations.

Thirty-one patients (52.5%) were started on medications, 5 (8.5%) received play therapy, and 3 (5.1%) were referred for special education. Twenty patients (34%) were deemed not to require any therapy. The patients were examined an average of 2 times. In total, 20 antidepressants (fluoxetine, sertra­line, citalopram, escitalopram, and imipramine), 16 antipsychotics (haloperidol, risperidone, aripip­razole, and quetiapine), 5 anxiolytics (clonazepam and diphenhydramine), and 1 psychostimulant (methylphenidate) were prescribed. These drugs (antidepressant + antipsychotic, antidepressant + anxiolytic, or antipsychotic + psychostimulant) were used in combination in 5 patients. Drug changes were made in 5 patients.

Our study detected a 15.3% rate of school absenteeism. A previous study reported a prevalence of 5.5% for the same parameter in patients who consulted a child and adolescent psychiatry clinic in southeastern Turkey for various reasons.16 The three-fold increased prevalence in our study suggests that disorders requiring transplant severely impair patient functionality. In our population, school absenteeism resulted from prolonged hospital stays, accounting for the possible impact of the primary disorder on cognitive skills and physical complaints. A family-based care approach should be adopted to prevent children from falling behind their peers, and therapeutic play, child life services, hospital-based schools, and pain control should be incorporated into treatment.17 A previous study indicated that pediatric transplant candidates experience school adaptation problems, which also contribute to school absenteeism.18 Therefore, interventions for patients with existing psychiatric disorders would support efforts to facilitate their school adaptation, increase their quality of life, and help them lead more independent lives.

Among all pediatric and adolescent patients undergoing transplant, a psychiatric consultation is the most commonly requested for heart transplant recipients. This is primarily because heart transplant can be only performed with organs from deceased donors. Previous research has suggested that the anxiety level of pediatric patients increases as the waiting period for heart or lung transplant procedures is prolonged.19,20 Transplant procedures with organs from deceased donors can be anxiety provoking, as the exact date of the transplant is entirely unclear. Moreover, children are continuously anxious because they could die at any moment during the waiting period for a suitable organ. One study reported that concerns experienced during the waiting period are related to thoughts of death, physical pain, and tissue rejection.21 However, the incidence of psychiatric illness in patients with hepatic failure is higher in patients who receive transplants from living donors, which is due to the guilt related to organ retrieval from a living donor.6 Overall, we observed that both living-donor and deceased-donor transplant procedures may increase the risk of psychiatric illness.

The prevalence of psychiatric disorders is as high as 60% among heart, kidney, and liver transplant candidates.22 In our study, the rate of consultation requests for transplant patients was 28.4% during a 3-year period. Furthermore, 69.4% of the patients seen were diagnosed with a psychiatric disorder. According to the National Psychiatry Action Plan issued by the Republic of Turkey Ministry of Health between 2011 and 2013, the rate of clinically significant problematic behavior among children and adolescents was 11%.23 Such a high rate of psychiatric disorders compared with the general population should be considered when examining patients undergoing or being scheduled for transplant. Indeed, all patients should undergo a psychiatric evaluation before and after transplant.

Adjustment disorder is the most common psychiatric diagnosis made in pediatric transplant patients,1,24 and our study consistently found a high prevalence of this condition. Depression and anxiety disorders are also common among pediatric patients undergoing transplant.25-28 Adjustment disorder, anxiety, and depression impair quality of life and may even cause patients to commit suicide, thereby contributing to the high morbidity and mortality rates.29 Adjustment disorder, which is characterized by the development of emotional or behavioral symptoms in response to an identifiable stressor or stressors, is the most common psychiatric diagnosis (50% of diagnoses) associated with an increased incidence of attempted and completed suicide among hospitalized patients.30 Consequently, a psychiatric evaluation is important not only for patients with moderate psychiatric symptoms but also for those with mild psychiatric symptoms.

Organ transplant is costly in terms of its impact on the economy and workforce, and failure to recognize a psychiatric disorder in this population can lead to a loss of patients and workers.

According to our analysis of the pharmacologic interventions administered to transplant patients with psychiatric disorders, monotherapy was usually sufficient, although additional therapy was needed by 5 patients. A switch in medications was made in only 5 patients, suggesting that psychiatric problems can be effectively treated when appropriately addressed.

It was previously demonstrated that post­transplant psychosocial status is strongly correlated with pretransplant psychosocial factors.32 Thus, although it is not legally binding (original date of May 29, 1979, No. 2238; Official Gazette Date of June 3, 1979, Official Gazette No. 16655; Law on Organ and Tissue Harvesting, Preservation, and Transport), an evaluation of pediatric patients by a practitioner with expertise in psychiatry before transplant is considered to be of great importance. Indeed, a psychiatric disorder was detected in 15 of 31 patients (48.4%) evaluated before the transplant procedure.

The retrospective design of the study and the lack of neuropsychologic testing for all patients are limitations of our study. Nevertheless, this is the first study to review the consultation records maintained by the Department of Child and Adolescent Psychiatry on organ transplants in children in Turkey. 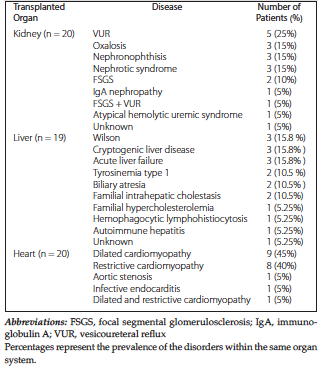 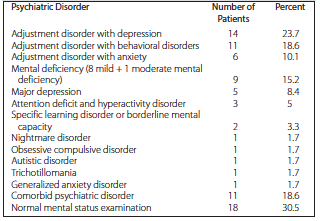 Table 2. Psychiatric Disorders Diagnosed in the Study Population According to Diagnostic and Statistical Manual of Mental Disorders (4th edition)