Objectives: In this study, we compared the surgical outcomes of penetrating keratoplasty using domestic and imported donor corneas.

Materials and Methods: We retrospectively evaluated 200 eyes and 200 consecutive patients who underwent penetrating keratoplasty by using domestic and imported donor corneas between January 2013 and December 2013. The donor characteristics, preop­erative clinical features, and clinical outcomes at 6, 12, 24, and 36 months were assessed.

Results: No significant differences existed between the 2 groups with respect to age, sex, lateralization, and penetrating keratoplasty indication (P > .05). Donor age was lower (P = .012), the death-to-preservation time and the preservation-to-surgery time were shorter, the rate of epithelial defect was lower, and the endothelial cell count was higher in the domestic group (P < .001). The 2 groups were also similar in terms of developing persistent epithelial defect, glaucoma, keratitis, and graft survival (P > .05).

Conclusions: We observed no significant differences in clinical outcomes during and after penetrating keratoplasty surgery between imported and domestic donor corneas.

Penetrating keratoplasty (PK) is the tissue transplant procedure with the highest success rate.1 The surgical success of PK is positively correlated with graft survival, which is affected by many preoperative, intraoperative, and postoperative factors. Although the first and the foremost step for achieving graft transparency is transplanting a donor cornea with a sufficient endothelial cell count2-5 and maintaining a sufficient endothelial cell count despite aging, surgical operation and all potential complications are important considerations in the long term.2

As with all other countries, donor tissue supply is an important problem in our country (Turkey). Little endothelial cell loss occurs during donor cornea storage in a solution containing 4°C chondroitin sulfate for up to 14 days, allowing international donor cornea sharing to come into effect.6 Although eye banks have certain standards, some prejudices exist toward donor cornea age, death-to-preservation time, preservation-to-surgery time, transport means, and the effects of these factors on endothelial cell count and corneal epithelium.

Several studies have already investigated endothelial cell lifespan and graft survival with imported corneas.2,7,8 The aim of this study was to compare the 3-year surgical outcomes of PK using imported and domestic donor corneas.

This study was approved by the ethics committee of Ankara Training and Research Hospital (Ankara, Turkey), and it conforms to the principles of the Declaration of Helsinki (2008) (study approval number: 192). The medical records of 326 patients who underwent PK at our clinic between January 2013 and December 2013 were retrospectively screened; patients who underwent lamellar or bilateral keratoplasty and patients with limbal stem cell deficiency were excluded. All patients were informed about the surgical procedure and possible complications, and all signed the voluntary informed consent form before treatment. Due to the large number of patients waiting for corneal transplant and the legal requirements in our country, an imported or domestic donor cornea was used regardless of patient risk situation.

Preparation of domestic donor cornea
All domestic donor tissues were obtained from the International Eye Bank of Ankara Training and Research Hospital and were retrieved within 6 hours of death and stored in Eusol-C (Alchimia, Ponte San Nicolò, Italy).

Preparation of imported donor cornea
All imported donor corneas were obtained from the Tissue Bank International (Baltimore, MD, USA). Endothelial cell count, donor age, death-to-preservation time, systemic illnesses of donors, previous surgeries, and cause of death were recorded on specific forms for all donor corneas. All corneas were stored in Optisol-GS (Bausch & Lomb, Bridgewater, NJ, USA) and kept at 4°C in a refrigerated container during 22.5 hour air transport from Baltimore to Turkey every Monday. The corneas were approved after the eye bank director examined them under biomicroscope and counted their endothelial cells (Eye Bank Kerato Analyzer EKA-10, Konan, Hyogo, Japan). Donor corneas with an endothelial cell count of 2000 or more were accepted.

All corneas were stored at 4°C in a refrigerator in the eye bank and transferred to a refrigerator at the operating room on the day of surgery. They were used after being thawed to room temperature at approximately 1 hour before the surgery.

Penetrating keratoplasty
The standard microsurgery technique was used in all patients who underwent PK. Donor corneas that were 0.25 to 0.50 mm larger than the recipient bed were resected from the endothelial surface with a punch trepan. The recipient bed was prepared with a vacuum trepan. After placement of 4 cardinal sutures with 10-0 nylon, the graft was sutured with interrupted or continuous sutures or a combination of these, and the knots were embedded into the recipient cornea. We used 1% sodium hyaluronate as a viscoelastic device. At the end of the operation, the anterior chamber was formed by balanced salt solution, and subconjunctival gentamycin (40 mg/0.5 mL) and dexamethasone (4 mg/1 mL) were injected.

Postsurgical treatment
During the postsurgical period, topical 1% prednisolone acetate (Predforte, Allergan, Irvine, CA, USA) was administered 8 times per day, with tapering over 6 to 12 months. Topical 0.5% moxifloxacin (Vigamox, Alcon, Fort Worth, TX, USA) at 6 times per day was administered for the first 2 weeks, and acetazolamide at 3 × 125 mg/day (Diazomid, Sanofi Aventis, Lüleburgaz, Turkey) was administered for the first 3 days. Systemic corticosteroids, topical lubricants, topical antiglaucomatous agents, and topical/systemic cyclosporine A were added to the regimen as necessary. Medication doses were adjusted by the patient's clinical condition.

Follow-up
All patients were regularly monitored at cornea section on day 1 and during week 1 and then every week for the first 2 months; at 3, 6, 9, 12, 18, and 24 months; and then at each year. At each visit, the best corrected visual acuity was checked, intraocular pressure was measured, and anterior and posterior segment examinations were done.

Clinical outcomes were compared in terms of corneal clarity and development of postoperative complications, including persistent epithelial defect, glaucoma, infection, and immunologic rejection. The clinical outcome was assessed by the demographic characteristics of the patients, donor age, time between donor death and preservation and between preservation and surgery, and the number of endothelial cells in the donor cornea.

Features of the donor
The preoperative donor features are shown in Table 2. The domestic group had a lower donor age (P = .012), shorter donor death-to-preservation time and preservation-to-surgery time (P < .001), lower rate of donor epithelial defects (P < .001), and higher endothelial cell count (P < .001). The preoperative sizes of donor epithelial defects for both groups are shown in Table 3.

No significant differences were found between the 2 groups in terms of graft transparency at 6 (P = .65), 12 (P = .83), 24 (P = .25), and 36 months (P = .23). Eleven cases of graft rejection occurred (6 irreversible) in the domestic group. The imported group had 16 cases of graft rejection (8 irreversible). No significant differences were shown regarding graft survival versus patient age, PK indication, donor age, donor death-to-preservation and preservation-to-surgery times, and endothelial cell count (P > .05).

One of the most important problems with keratoplasty surgery is an inadequate supply of donor corneas. This causes long wait times for keratoplasty surgery, leading to socioeconomic and psychologic problems. To overcome this problem, international tissue/cornea sharing has been implemented.

Donor age
To date, many studies have investigated the effects of donor age on graft survival, albeit with inconsistent results.2,3,9-13 Wagoner and associates,2 in a study with imported corneas, reported that, as donor age increased, the risk of endothelial failure increased and graft survival decreased. Despite imported corneas retrieved from significantly older donors, we did not find a relationship between donor age and graft survival, as the success rates for both groups were similar, supporting the findings of Ababneh and associates.3

Epithelial integrity
Another important parameter affecting graft survival with the use of imported corneas is donor epithelial defects occurring during the preservation-to-surgery time and transport. Whereas some studies have reported a positive correlation between prolonged storage time and postoperative epithelial defects,2,14 others have opposed an association between prolonged storage time and reepithelization and graft survival.17,18 Our study demonstrated a significantly lower rate of epithelial defects with domestic corneas than with the imported ones. It has been reported that the epithelial status at postoperative day 1 did not affect ocular surface status at the first month after PK and graft survival.18 In our study, epithelial integrity was achieved in 3 weeks in all cases, and a significant correlation was seen between donor epithelial defect preoperatively and presence of epithelial defects on corneal graft at postoperative week 1. Although there were no statistical differences between the 2 groups in persistent epithelial defect development in later periods, we observed that the imported group was more resistant and less responsive to medical treatment alone. Hu and associates14 reported that "the use of donor cornea over 7 days between death and surgery affected surgical success with the cause of poor reepithelization and upon arrival, the imported donor corneas had unhealthy corneal epithelium with large epithelial defects and diminished endothelial specular reflection with blurred intercellular borders on specular microscopic examination after long-term storage and overseas transportation."

Our results showed that imported donor corneas are as safe and efficacious as domestic corneas, although the imported donors were older, had a longer death-to-surgery time, and a greater rate of epithelial defects. An international cornea sharing system seems to be a reliable alternative for countries having difficulties with donor tissue supplies. 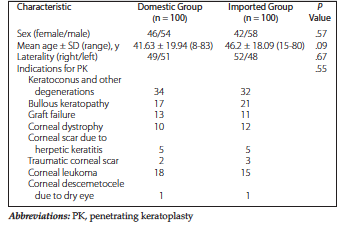 Table 1. Demographic Properties of the Patients and Indications for Penetrating Keratoplasty in Both Groups