In designated transplant centers, mortality after liver resection has been reported to be < 5% for metastatic disease and < 10% for primary hepatocellular carcinoma (HCC).1 However, unresolved debate remains regarding some complications of liver surgery. The most severe complication after liver resection is development of postoperative hepatic failure (POHF).1 Clinical presentation may vary from rapid progression of jaundice, coagulopathy, encephalopathy, and multiorgan failure in the first few days after surgery to slow but uncontrollable increases in bilirubin levels over weeks. Mortality occurs in an estimated 1.6% to 2.8% of cases.1 Improvements in the preoperative evaluation of patients and the extension of postoperative care boundaries are added safety measures for liver resection. In addition, technical advancements have allowed experienced surgeons to push the boundaries of liver surgery. Here, we report a case of rapidly progressive POHF after extended liver resection for HCC that was treated with intra-arterial tissue plasminogen activator (TPA) infusion and concurrent liver support facilities.

An 18-year-old female patient underwent a liver resection for HCC with profound anemia. Preoperative computed tomography (CT) imaging showed a large liver tumor (largest diameter was 18.7 × 13.2 cm), which included segments 6, 5, 4A, 4B, and 2 without distant metastasis (Figure 1). Her preoperative liver functions were within reference ranges. Preoperative volumetric analyses indicated that the expected residual volume would be 40% after liver resection. Laparotomy revealed no extrahepatic metastasis or ascites in the abdomen with low-grade hepatosteatosis (microscopically grade 2). With the help of low central venous pressure and intermittent application of the Pringle maneuver (30-minute clamping time), the tumor was resected following the capsular plane (tumor weight of 1700 g). The operation was completed within 180 minutes. Bleeding volume was 800 mL, and 2 units of red blood cells and 3 units of fresh frozen plasma replacement were used during the perioperative period. The patient made a good recovery and was transferred to the surgical ward after the operation. Prophylactic enoxaparin (20 mg/day) and antibiotic prophylaxis with ceftriaxone (1 dose of 2 g/day) were commenced in the perioperative period.

The patient was mobilized on postoperative day 1. However, a dramatic elevation of biochemical markers of liver injury was noted on postoperative day 2 (Figure 2). Helical CT imaging showed perfusion disturbance in segments 7 and 8 (Figure 3a). The main trunk and branches of the portal vein, hepatic veins, and inferior vena cava were followed with continuity in all imaging sections. However, the peripheral branches of the right hepatic artery were followed with difficulty. Digital subtraction angiography for hepatic artery competency was performed on postoperative day 2, showing a somewhat slowing flow and truncated branches in the distal vasculature probably due to tiny thrombi. However, unavoidable ligation of some peripheral branches of the right hepatic artery was verified (Figure 3b). As a result of the helical CT and angiography findings, we deduced presence of microthrombus resulting in hypoperfusion of remnant liver parenchyma.

To enhance the hepatic microcirculation of the well-vascularized portion of the remnant liver, a 10-mg bolus of TPA over 20 to 30 minutes was injected into the right hepatic artery. After TPA injection, the patient was followed without bleeding complications from the raw surface of the liver. The observed increases in biochemical markers of liver injury discontinued on postoperative day 3, with parameters then decreasing (Figure 2). Control helical CT imaging showed persistence of demarcation line in liver parenchyma (Figure 3c). However, the patient developed encephalopathy related to high ammonia levels (186.1 μmol/L), and she was transferred to an intensive care unit for continuous venovenous hemodiafiltration treatment on postoperative day 3. According to our policy and algorithm on liver failure,2 supportive treatment and nasoenteric nutrition were continued in the intensive care unit. On postoperative day 5, the encephalopathy was resolved, and the patient also showed improved liver functions. Hemodiafiltration treatment was stopped on postoperative day 6, and the patient was transferred to the surgical ward on postoperative day 7.

Control helical CT imaging at the first post-operative week showed persistence of demarcation line in liver parenchyma with minimal ascites in the abdomen. The patient was discharged on post-operative day 18. During the 6-month postoperative period, the patient showed no further complications.

Our strategy for enhancement of hepatic microcirculation was based on previous data derived from liver transplantation.3 After liver transplant, both the hepatic artery and portal vein of the liver are vulnerable to thrombosis, and interventional thrombolytic therapy with TPA has been used for this devastating complication. In contrast to liver transplantation, complete injury or ligation of hepatic artery or portal vein of remnant liver is considered unacceptable complication for elective hepatectomy. Indeed, the peripheral branches of these vasculatures are vulnerable to surgical injury, especially in nonanatomic extended liver resections. In the presence of unavoidable injury, as occurred in our case, the remnant liver volume did not match the preoperative expectations. The rapid deterioration of our patient after the surgical procedure indicated POHF.

To improve the hepatic microcirculation in our patient, we decided that TPA would be the best choice when considering the cumulative clinical experience on thrombolytic treatment obtained from stroke cases in which intra-arterial TPA injections were used.5 To the best of our knowledge, intra-arterial TPA injection into the remnant liver has not been used previously for the treatment of POHF developed after liver resection. As observed in our case, if the development of microthrombus in the liver parenchyma induces POHF, TPA improves perfusion of liver, allowing the patient to recover from this devastating state. The main concern regarding interventional thrombolytic treatment with TPA is bleeding from the surface of the liver. However, in stroke studies in which up to 50 mg of TPA was used, the administration of 10 mg of TPA is considered within a safe range.5 When clinicians are faced with this complication, close follow-up of both the hemodynamic status of the patient and intra-abdominal drains are recommended. 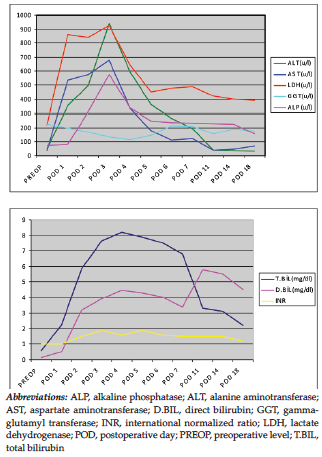