Renal transplant (RT) is the only treatment option that can increase quality of life and the lifespan of patients with end-stage renal disease (ESRD). Success rates of RT have improved with advances in surgical techniques and immunosuppressive protocols. However, vascular complications, infections, and rejection are still major complications that negatively affect graft and patient survival.1

The overall incidence of vascular complications after RT is low. Arterial complications are more frequent and deadly than venous complications. External iliac artery dissection (EIAD) related to trauma due to vascular clamping is a rare com-plication and only reported in 6 cases in the literature.1,2 However, treatment is urgently required due to its devastating effects on graft and lower limb circulation. External iliac artery dissection is seen more often in recipients with diabetes mellitus and other peripheral arterial diseases.3 Between October 1985 and December 2015, we performed 2248 RT procedures at our centers with only 2 patients having EIAD complications. Here, we present the manage-ment of 2 cases with traumatic EIAD due to vascular clamping.

At hour 3, due to sudden anuria, we performed a Doppler ultrasonography of the graft. The test showed no flow in the external iliac artery and low renal arterial flow. Immediate angiography was planned for diagnosis and treatment. Vascular access through the left femoral artery was impossible. Therefore, the angiography was done through the right femoral artery. Here, we found right EIAD. Dissection started just proximal to the anastomosis; however, renal artery flow was still continuing (Figure 1A).

Percutaneous stenting was not possible; therefore, urgent surgical reconstruction was planned. During exploration, we found renal blood flow to be low and observed the external iliac artery to be completely dissected distal to the renal artery anastomosis. The dissected external iliac artery segment was replaced with a 10-mm expanded polytetrafluoroethylene (ePTFE) vascular graft. A distal anastomosis was performed end-to-end between the ePTFE and the femoral artery using continuous 7/0 polypropylene sutures. A proximal anastomosis was also performed end-to-end between the ePTFE and common iliac artery using continuous 7/0 polypropylene sutures (Figure 1B-1D).

The renal artery anastomosis was disrupted, and the kidney was reperfused with tissue preservation solution. After this, the renal artery was anastomosed to the vascular graft using 7/0 continuous polypropylene sutures. Vascular clamps were opened again, and the entire graft was reperfused, which showed excellent graft tonus and renal artery thrill. Intraoperative Doppler ultrasonography scan was repeated, and graft perfusion and distal flow in the external iliac artery were within normal ranges. Urinary output started immediately during the early postoperative period. Clopidogrel at 75 mg and low-molecular-weight heparin were started. The patient was discharged on day 7 after the operation with normal serum creatine level of 1 mg/dL. At month 3, his serum creatine level was 0.9 mg/dL.

Case 2
A 55-year-old woman with chronic renal failure was evaluated for living related-donor kidney transplant. She had diabetes for 15 years and was on dialysis for 5 years due to diabetic nephropathy. She also had hypertension for 5 years and coronary artery disease with coronary artery stent replacement 2 years previously. Iliac artery and vein Doppler ultraso-nography scans were normal on pretransplant evaluation.

To perform renal artery anastomosis, 4 rings of the vascular graft were next removed, and the renal artery was anastomosed to the vascular graft using 7/0 continuous polypropylene sutures (Figure 2). Vascular clamps were opened again, and an entire graft reperfusion with excellent graft tonus and renal artery thrill was observed. Intraoperative Doppler ultrasonography scan was repeated, and graft perfusion and distal flow on the external iliac artery were within normal ranges. Subcutaneous low-molecular-weight heparin (enoxaparin sodium) at 40 mg/0.4 mL was started at twice per day after the operation, but it was discontinued because of a perirenal hematoma detected with Doppler ultrasonography scan and abdominal computed tomography scan on posttransplant day 1. The patient was reoperated, and the hematoma was drained.

Clopidogrel at 75 mg and aspirin at 100 mg per day were started on posttransplant day 3. Antithymocyte globulin induction therapy was administered at the time of transplant as well for 5 days thereafter. Tacrolimus (target level 8-10 ng/mL), myco-phenolate sodium (720 mg twice per day), and prednisolone were started as immunosuppressive therapies. Control Doppler ultrasonography scan was repeated on postoperative days 1 and 3. The patient was discharged on postoperative day 10 with a serum creatinine level of 1.35 mg/dL without complications.

Traumatic EIAD is a rare but devastating complication after kidney transplant. External iliac artery dissection related to trauma due to vascular clamping is a rare complication and has been reported in only 6 cases in the literature.1 Four EIADs were diagnosed after transplant, and 2 EIADs were seen intraoperatively. In our study, we diagnosed 1 intraoperative EIAD and 1 EIAD in the early postoperative period.

Vascular atherosclerosis and cardiomyopathy are predisposing factors for EIAD after RT.4 In addition to senility, hypertension, dyslipidemia, smoking, and diabetes, many extraordinary risk factors (like anemia, microalbuminuria, and oxidative stress) may play a role in EIAD in patients with ESRD.5 One of our patients had diabetes and hypertension for 15 years. Iliac artery and vein Doppler ultrasonography scans were normal in both patients without atherosclerosis.

In the literature, 4 cases were treated by percu-taneous angioplasty and stenting, 1 case was treated with bypass surgery, and 1 case was managed with thrombectomy and angioplasty. We performed immediate reconstruction with ePTFE graft in our case 2 in which EIAD was diagnosed intraoperatively. In our other patient, reconstruction with ePTFE graft was done after failed percutaneous interventional angioplasty. In both patients, renal arteries were anastomosed to the ePTFE graft.

In the literature, both plastic clamps and metallic clamps with plastic protector attachments may be used for kidney transplant. In our center, we use vascular clamps with plastic protector attachments for advanced atherosclerotic vessels. In the 2 patients described here, we did not use atherosclerotic sites of the vessels for clamping so we preferred metallic clamps. In addition, we believe that the main cause of dissection was due to rapid shutdown of the vessels. 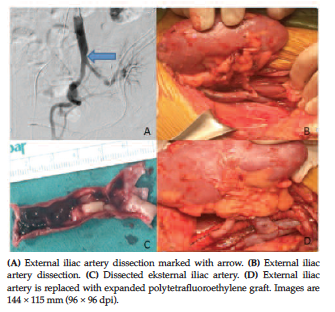 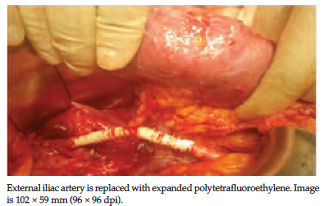