A 26-year-old man with severe aplastic anemia (SAA) was admitted with fever, periorbital swelling, periorbital pain, and bloody nasal discharge. The patient had been diagnosed as having SAA 10 days previous, when a bone marrow examination (aspiration and biopsy) was compatible with SAA (bone marrow cellularity of < 10%). Nasal and right periorbital erythema had developed 3 days before admission. On physical examination, he had a fever of 38.5°C, nasal and right periorbital erythema, and right periorbital swelling. An examination of the eyes was normal and no neurologic abnormalities were detected. His hematologic tests revealed pancytopenia (white blood cell count, 0.33 × 109/L; hemoglobin, 7 g/L; platelet count, 19 × 109/L) and the percentage of neutrophils in the peripheral blood was 1.9% of total nuclear cells. A computed tomography scan of the paranasal sinuses demonstrated a space-occupying lesion in the right maxillary and ethmoid sinus region (Figure 1). Histopathologic examination revealed numerous periodic acid schiff-stained Aspergillus hyphae without tissue invasion. Tissue culture revealed Aspergillus fumigatus. Voriconazole administration (12 mg/kg/d) was started. However, 20 days later, the patient developed fever and flare of nasal discharge.

A 24-year-old man was admitted to our clinic for pancytopenia. On physical examination, he had cutaneous and conjunctival pallor and petechia. His hemoglobin count was 11 g/L, white blood cell count 2.48 × 109/L, neutrophil ratio was 1.3%, and his platelet count was 18 × 109/L. On bone marrow biopsy, cellularity was found as 3%. The patient was diagnosed with SAA and allogeneic hematopoietic stem cell transplant (HSCT) was planned. However, he had fever on the third day of admission; empirical piperacillin/tazobactam was started. His antibiotic therapy was switched to meropenem and teicoplanin because of persistent fever, which could not be controlled despite antibiotic therapy. Invasive pulmonary aspergillosis was suggested based on the presence of pneumonic consolidations on computed tomography scan of the thorax (Figure 2) and galactomannan positivity (1.18 index). Liposomal amphotericin B was started in therapeutical dose (5 mg/kg/d). His fever continued despite antibiotic therapy and liposomal amphotericin B.

Background
Idiopathic aplastic anemia (AA) is a rare disease characterized by peripheral blood cytopenias due to failure of the bone marrow to produce blood cells.1 Severe AA (SAA) is almost always fatal unless treated.2 Death from SAA is usually due to complications such as infection, hemorrhage, or severe anemia.3 Fatal infection by bacteria and invasive fungal (especially Aspergillus) are the most frequent cause of SAA mortality.3

However, there are a paucity of specific reports about infections and their therapy in patients with AA.3 We aimed to discuss the treatment scenarios for 2 SAA patients who have invasive fungal infection.

Treatment scenario 1. Postpone transplant and continue antifungal therapy
Invasive fungal infections (IFI), particularly those caused by Aspergillus species, have long been recognized as a major cause of death in SAA.4 It is dif­ficult to treat patients with AA and a fungal infection.5 The severity and mortality of infection are significantly correlated with the severity and duration of neutropenia.3 Compared with leukemia and the other neutropenia-induced disorders by cytotoxic chemo­therapy, neutropenia of SAA exists much longer.3

In a series, it was found that patients with neutrophil count less than 0.2 × 109 /L (as SAA) had more frequent and severe infections; pulmonary infection and septicemia had higher mortality (56% and 73.3).3 In another series, which examined the infections of 103 AA patients, all 14 patients with aspergillosis died despite amphotericin B therapy and selected adjuvant surgical resection.4 In a more recent series, of 42 patients with AA followed between 1994 and 2000, invasive fungal infections accounted for 36% of neutropenic infections, and 5 of these 9 episodes were fatal.4 Even in the last few years, the response rate of new antifungal drugs, as voriconazole and liposomal amphotericin B, was only about 30% in patients with severe neutropenia and persistent fever.3

Treatment scenario 2. Immediate hematopoietic stem cell transplant under antifungal therapy
Aplastic anemia is a disorder of stem cell failure, leading to refractory and prolonged pancytopenia.5 Therapy for recovery of hematopoiesis in patients with AA should include immunosuppressive therapy or HSCT.5 A condition in which the response to immunosuppressive therapy can take up to 6 months to develop leading to a neutropenic period that is typically longer than that seen after HSCT.4

There is a paucity of data about HSCT under active IFI in the literature. Even a previous IFI in a HSCT candidate might lead to exclusion of the patient from the transplant program due to high risk of reactivation and transplant related mortality in many studies.6 In a previous analysis of 75 centers registered in the European Organization for Research and Treatment of Cancer Fungal Group and European Group for Blood and Marrow Transplantation, 85%, 24%, and 39% of the centers reported rejecting cases with prior cerebral, sinus, and pulmonary fungal infections.6 Excluding these patients from HSCT programs might preclude the only curative treatment modality.6

Hematopoietic stem cell transplant with active IFI places the patient at a higher risk for transplant-related mortality.6 However, HSCT without delay is only curative treatment approach in some patients.6 Aki and associates6 retrospectively analyzed 13 patients (3 SAA) who underwent HSCT under active IFI, and reported that 1 of 3 SAA patients died from progressive fungal infection on posttransplant day 11. The authors concluded that active IFI should not be considered to be an absolute contraindication to subsequent HSCT.6

What did we do?
We did not consider immunosuppressive therapy as our patients were young, had human leukocyte antigen full-matched sibling donors, and active invasive fungal infection, and recovery time would be prolonged under immunosuppressive therapy. Moreover, we decided for allogeneic HSCT from human leukocyte antigen full-matched sibling donors, as we could not achieve significant improvement with antifungal therapy and a continued high mortality risk. We aimed to overcome the neutropenia within the shortest possible time. We performed HSCT under antifungal therapy in both patients. Both patients received 5 mcg/kg/daily filgrastim in accordance with the transplant protocol. The second patient received granulocyte infusion once on day +9. Both patients overcame the neutropenic period unproblematically without fungal infection progression and fungal infection was rapidly controlled after neutrophil engraftment, and they were discharged without severe morbidity.

In conclusion, an immediate HSCT may be life-saving, and granulocyte colony stimulating factor plus granulocyte transfusion may be used as a bridge to HSCT in patients who do not satisfactorily respond to antifungal therapy, although there is a paucity of data about HSCT in SAA patients with active invasive fungal infection. 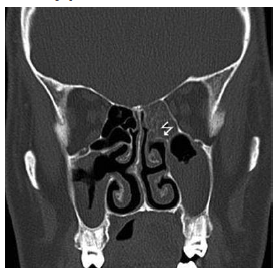 Figure 1. Coronal View of CT Is Showing Destruction of Left Maxillary Sinus Walls, and Extending Up to the Ethmoidal Sinus 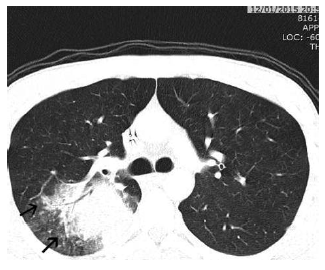