Pancreas transplant is one of the known most effective treatments for type 1 diabetes mellitus and is associated with improved survival and quality of life for patients. Most centers use a direct side-to-side anastomosis between the donor’s duodenum and jejunum, and we describe a rare complication that affected 2 patients. The 2 patients each received a simultaneous kidney-pancreas transplant and presented with side-to-side duodenojejunal anastomosis volvulus. We describe the clinical and radiological presentations and then propose an effective management method. Side-to-side duodenojejunal anastomosis volvulus after pancreas transplant is an exceptional complication, and there are special radiological and surgical manage-ment techniques to allow efficient treatment.

Pancreas transplant is one of the most effective treatments for type 1 diabetes mellitus and is associated with improved survival and quality of life for patients.1,2 Typically, it is offered to patients with type 1 diabetes with end-stage renal disease as a simultaneous pancreas and kidney transplant, or occasionally as a pancreas-after-kidney transplant, with proven long-term improvements in recipient morbidity and mortality. Pancreas transplant is also offered as a pancreas-alone procedure to a much smaller group of preuremic patients, who may present with the devastating effects of hypoglycemic unawareness.

Thus, since the first human pancreas transplant performed in 1966 at the University of Minnesota,3 the surgical technique of pancreas transplant has progressively changed, most notably by the use of exocrine drainage techniques.4 Until the late 1990s, the bladder drainage technique was used in most transplant centers.5 However, there are aspects of bladder drainage that may cause metabolic and urological complications.4 For these reasons, most centers now use enteric drainage, which is presently considered the optimal method in the management of pancreatic exocrine secretions.6 Most centers use a direct side-to-side anastomosis between the donor’s duodenum and jejunum, although other teams prefer to use a Roux-en-Y bowel loop. The Roux technique is described as safer in cases of digestive fistula; however, the side-to-side anastomosis allows an endoscopic access, which may be especially useful in cases of variceal bleeding.

We describe 2 cases of side-to-side volvulus, with radiological suggestions, successfully treated by surgery.

Each patient underwent a simultaneous pancreas-kidney transplant from a deceased donor (brain death). Via a midline xyphopubic incision, the pancreaticoduodenal graft was implanted intrape-ritoneally in the right lumbar region. The pancreas portal vein was anastomosed to the recipient’s inferior vena cava without venous extension graft. The Y-graft reconstruction derived from the donor’s iliac bifurcation was anastomosed to the recipient’s right common iliac artery. Exocrine drainage was performed by a side-to-side duodenojejunal anasto-mosis approximately 30 cm from the pylorus.

With the mesenteric fixed point with volvulus around, all bowel loops seemed tilted to the left (Figure 1).

Patient 2 had a similar clinical presentation. Ten months after surgery, patient 2 presented with abdominal pain and vomiting. The CT scan showed an important donor duodenal distension, without occlusive syndrome, very limited effusion, and only minor enhancement of peritoneal leaflets. An aspect of mesenteric twist, without dilatation of the bowel upstream, was also observed (Figure 2). A further CT scan was performed when the patient presented with an acute painful episode, which revealed a massive pneumoperitoneum (Figure 2).

In both patients, the CT scans showed an important donor duodenum distension, with an aspect of mesenteric twist around the side-to-side anastomosis.

An emergency laparotomy was performed for both patients, which revealed chemical peritonitis with pseudo-membranous, dilated bowels, and twisting of the bowel loops.

Pancreas transplant is a well-tolerated and reliable treatment for type 1 diabetes.7 Surgical complications occur but have significantly decreased in the present decade.

Until the late 1990s, the bladder drainage technique was used in most transplant centers. Bladder drainage, via duodenovesical anastomosis, is an alternative to enteric drainage and does not interfere with native bowel integrity and facilitates monitoring of pancreatic secretions (amylase) by urinalysis. Direct biopsies of the duodenum or pancreatic graft can be performed by cystoscopy.

As a result of these long-term urological comp-lications, 10% to 40% of bladder-drained pancreases will eventually require enteric conversion, with several possible anastomoses, including Roux-en-Y duodenojejunal anastomosis.4

In the 1990s, 2% to 5% of transplants were perfor-med with enteric drainage, and this percentage has increased dramatically, reaching up to 75% today.8

Volvulus is a rare complication after pancreas transplant. A possible mechanism of this volvulus would be the rotation of the jejunum in the right lower quadrant from the left upper quadrant during anastomosis.9 It remains imperative to manage these patients rapidly in surgery, in order to avoid duodenal necrosis and graft loss.8

After our experience with these 2 patients, we now use a different surgical strategy to avoid the twist of the mesentery: we fix the jejunum to the mesocolon above and below the side-to-side anastomosis, and we perform a duodenojejunal anastomosis further away from the Treitz angle (the junction of the duodenum and jejunum adjacent to the mesenteric vessels), in order to put less strain on the recipient’s duodenum (Table 1). 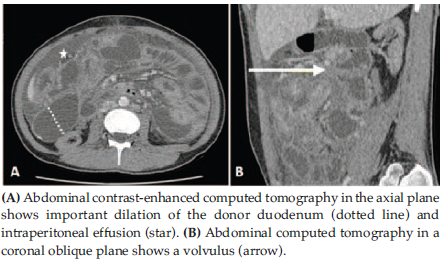