Mucormycosis can result in serious morbidity and mortality, especially in transplant recipients. In this case report, we present a 3-year-old female patient with maple syrup urine disease who developed mucormycosis infection after deceased donor split liver transplant. Progressive segmental necrosis of the small intestines and new ischemic areas were observed after repeated abdominal surgeries. Microscopic examination of biopsy material revealed mucormycosis. Early recog-nition is crucial for treatment, and patients with clinical suspicion can be treated empirically with antifungal medicine. However, diagnostic tests with accurate and fast results are needed and more effective therapeutic methods should be developed for better outcomes.

Mucormycosis is a rare infection caused by fungi belonging to order Mucorales. Numerous gastroin-testinal mucormycosis cases have been reported from Asia, especially India, over the past 30 years.1 Hematopoietic stem cell transplant, solid-organ transplant (SOT), diabetes mellitus, and corticosteroid therapy are known risk factors.2 However, mucormycosis infections have high rates of morbidity and mortality and are difficult to treat. Maple syrup urine disease (MSUD) is caused by abnormal activity of the branched-chain alpha-ketoacid dehydrogenase complex and results in the accumulation of branched-chain amino acids (BCAAs) and their ketoacids. Affected children may have irreversible neurologic deficits and episodes of acute metabolic crisis, which may cause mortality.3 Patients usually need to follow a BCAA (valine, leucine, and isoleucine)-restricted diet to reduce the risk of an acute metabolic crisis. Liver transplant can be considered for suitable patients who have frequent acute metabolic crises. Transplant may prevent further neurologic damage and metabolic episode since the liver has approximately 10% of the total branched-chain alpha-ketoacid dehydrogenase activity.4,5 There is no evidence that MSUD prompts mucormycosis, although mucocutaneous candidiasis is commonly observed in such patients.3,6 In the case presented here, the patient developed a mucormycosis infection during the first 21-day intensive care unit stay after liver transplant. Although mucormycosis after liver transplant has been well defined in the literature, to our knowledge, this is the first reported case of an isolated intestinal mucormycosis in a pediatric liver transplant recipient.

A 3-year-old female patient with MSUD (weight of 10 kg; height of 75 cm; A blood type, Rh positive) was admitted to a pediatric intensive care unit after deceased donor split liver transplant. The patient had received a left lateral liver graft from a deceased donor with the same blood type, which had been procured with an ex vivo splitting procedure, using the piggyback technique (graft-to-recipient weight ratio of 3.5%). Roux-en-Y hepaticojejunostomy with biliary stent was preferred for the biliary reconstruction after the vascular anastomoses had been completed. The patient had been previously admitted to intensive care units several times due to metabolic crises after diarrhea episodes. Preoperative plasma immunoglobulin (G, A, M, and E) and postoperative lymphocyte subgroup levels were considered normal. Preoperative isoleucine and leucine levels were 157 ?mol/L (reference range, 33-97 ?mol/L) and 26.7 ?mol/L (reference range, 65-179 ?mol/L), respectively. After transplant, tacrolimus was started at a low dose (0.05 mg/kg/day) and then was gradually increased to the target serum level. Methylpred-nisolone was started at 10 mg/kg/day and was then slowly decreased to 1 mg/kg/day. Piperacillin-tazobactam (300 mg/kg/day) and teicoplanin (30 mg/kg first day and 10 mg/kg/day afterward) as treatment and fluconazole (3 mg/kg/day) and ganciclovir (5 mg/kg/day) as prophylaxis were administered to the patient. Valganciclovir was replaced with ganciclovir in enteral administration on day 2 posttransplant. Thiamine at 100 mg/day was continued after enteral drug administration was allowed. Enoxaparin prophylaxis (1 mg/kg/day) was started. After liver transplant, Doppler ultrasonography was performed at least once per day by an experienced radiologist for the first 7 days posttransplant. Hepatic arterial (maximum of 195/50 cm/s, minimum of 65/15 cm/s), venous (natural triphasic), and portal venous blood flow (maximum of 45 cm/s, minimum of 20 cm/s) were observed. Liver transaminase levels were elevated (alanine aminotransferase of 727 U/L, aspartate aminot-ransferase of 804 U/L) on day 5 posttransplant, and the possibility of acute cellular rejection was considered. During follow-up examination, a liver biopsy confirmed the rejection. Methylprednisolone was increased to 10 mg/kg/day before the confirmative results of the liver biopsy. A single dose of antithymocyte globulin (1.5 mg/kg) was given but was stopped after observation of thrombocytopenia and upper gastrointestinal bleeding. Therefore, a single dose of basiliximab (10 mg) was given. On day 7 posttransplant, a 13 × 6 × 3.5-cm hematoma-like image, which was placed from sub-splenic space to the left side of the pelvis, was seen on ultrasonography. Hence, the patient underwent explorative laparotomy, which was the first of the 6 reoperations after transplant (on days 7, 10, 12, 13, 17, and 19 posttransplant). In the first reoperation, a large intraluminal hematoma was obstructing the afferent limb of the Roux-en-Y hepaticojejunostomy. The hematoma was removed through enterotomy. Piperacillin-tazobactam was ceased, and meropenem (60 mg/kg/day) was started to treat suspected sepsis. The patient’s condition subsequently deteriorated. Abdominal distention and serohemorrhagic leakage persisted even after repeated operations. New ischemic areas of the small intestine and progressive segmental necrosis were observed after each subsequent abdominal operation (Figure 1). At the last reoperation on day 19 posttransplant, there were massive small and large bowel necroses between 40 cm distal of the jejunojejunostomy anastomosis and the right colic flexure. Resection with end ileostomy was performed. We examined BCAA levels with the use of high-performance liquid chromatography. Plasma leucine levels were shown to be elevated at 1189 ?mol/L. Continuous venovenous hemodialysis was performed, and L-carnitine (50 mg/kg/day) was started on the third day. Dialysis was stopped when leucine levels decreased (106 ?mol/L) after 18 hours. Branched-chain amino acid levels remained low during follow-up (Figure 2). After day 9 posttransplant, ammonia levels were shown to be elevated (289 ?g/dL). Total parenteral nutrition was provided at a glucose infusion rate of 8 mg/kg/min without protein, and insulin infusion was administered when serum glucose levels increased (>200 mg/dL). L-ornithine L-aspartate (2.5 mg at 4 times per day), phenylbutyrate (250 mg/kg/day), and sodium benzoate (250 mg/kg/day) were administered because of persistently high levels of ammonia (maximum of 882 ?g/dL). Continuous venovenous hemodiafiltration was administered due to positive fluid balance and was continued after the inter-mittent ending of the process during reoperations to lower the leucine and ammonia levels over the subsequent days. On day 20 posttransplant, microscopic exami-nation of biopsy material, which had been obtained on previous operations (on days 10, 17, and 19 posttransplant), revealed mucormycosis. The patient was started on liposomal amphotericin B therapy, and prophylactic fluconazole was ceased. Despite these treatments, the patient died as a result of sepsis and probable disseminated infection on day 21 posttransplant. No positive blood, tracheal, urine, or biopsy material cultures were shown. An autopsy was not performed per the parent’s consent.

Most patients with mucormycosis are hematologic stem cell transplant and SOT recipients, and this infection is rarely observed in children. Solid-organ transplant recipients can have rhino?sino?orbital, rhino-cerebral, pulmonary, gastrointestinal, cutaneous, and renal presentations.7 Over a 1-year period, one study revealed the prevalence of mucormycosis in SOT to be 0.07%, with incidence in liver transplant patients of 4 to 16 per 1000 recipients.8 Most patients with mucormycosis have respiratory tract-related infections, and gastrointestinal mucormycosis, which has higher mortality and dissemination rates, is rarely seen. Rhizopus, Lichtheimia, and Mucor are the most common genera, and Rhizopus arrhizus is the most frequently diagnosed species.9 Mucormycosis of the small intestine in the early period after pediatric liver transplant is extremely rare in the literature. In a study of immunocom-promised adult patients with gastrointestinal mucormycosis infection, approximately 52% of patients were SOT recipients, and 35% were receiving chemotherapy for hematological malignancy.10 Even healthy individuals can have infection after traumatic exposure to contaminated soil, but this is extremely rare. Infection sites of the gastrointestinal areas can include the large intestine (43.2%), stomach (33%), and small intestine (28.4%) in both adult and pediatric populations, with children having lesser stomach involvement than adults.1 In the case presented here, the pediatric patient had small bowel involvement and recurrent perforations. The patient died as a result of extensive ischemic necrosis with a rapidly progressing course. Broad-spectrum antibiotics and malnutrition are risk factors for children, and prematurity and very low birth weight are critical factors for neonates. Abdominal masses, distention, biliary leaking, and gastrointestinal bleeding are the most common problems.1 Health care-related mucormycosis can be caused by contaminated umbilical catheters, dressings, ostomy bags, bandages, and wooden tongue depressors.2 In the case reported here, it was not possible to distinguish whether the mucormycosis developed as a result of the repetitive surgical operations or whether surgical complications resulted from mucormycosis. In patients with delayed diagnosis, mortality can be higher and dissemination can be prominent. However, because mucormycosis is difficult to detect, the diagnosis may be delayed. Unlike Aspergillus and Candida, there are no serologic tests that are sensitive and specific for diagnosis of mucormycosis. Beta-glucan and galactomannan negativity may exclude the other 2 mold infections. Testing with polymerase chain reaction may be a promising option; however, test results are mostly positive when disseminated infection has occurred. Culture and microscopic examinations of biopsy material or fluid can suggest infection, but invasive interventions are required. Culture sensitivity is low, and microscopic evaluations need a high index of suspicion and must be subjective. Molecular diagnostic methods can be applied in paraffin and formalin-preserved samples. However, pathological examinations can cause delay in diagnosis as a result of required time.11 In the case presented here, a polymerase chain reaction test could not be administered because of limited resources and because surgical tissue specimen cultures were reported as negative. The diagnosis of mucormycosis was possible with histopathological examination. The resulting report stated, “black-brown necrotic ulcerated areas on the surface of the ileum, widespread hemorrhage, necrosis and inflammation and tissue loss were observed adjacent to normal areas on the ileum wall. Large irregular microorganisms around the vessels and in the lamina propria and some microorganisms which stained in black with 90 degrees branching with Grocott methenamine silver stain were observed” ((Figure 3), (Figure 4), and (Figure 5)). Mucormycosis is seen mostly in the first month after liver transplant. Clinically, early recognition and empiric therapy with amphotericin B or posaco-nazole may be successful, especially when blood, urine, and tracheal cultures are negative and when there is accompanying necrosis on macroscopic examination or unexplained high levels of acute phase reactants suggestive of an infectious disease. Current strategies recommend the early use of computed tomography scans and sampling techniques, evaluation of surgically excised necrotic infected tissue, testing of antifungal susceptibility, and use of antifungal medications while controlling hyperglycemia and iron overload. Surgical intervention and hyperbaric oxygen therapy may be needed.11 Immunosuppressive therapy should be reduced. There is a concern about mucormycosis treatment because of the in vivo responses to antifungals, pharmacokinetic and pharmacodynamic effects of the drug on the infection site, and effects of immunosuppression and surgery. Current treatment options are single liposomal amphotericin B, posaconazole, isavuconazole therapy, and combined liposomal amphotericin B, caspofungin, or posacona-zole therapy. In the case reported here, fluconazole was discontinued and liposomal amphotericin B was started at a therapeutic dose after the diagnosis of mucormycosis. Hyperbaric oxygen therapy could not be applied because the clinical condition of the patient was not suitable.
A relationship between MSUD disease and Candida infection has been suggested. However, so far in the literature, there is no evidence of an increased risk of mucormycosis in patients with MSUD. The T-helper 2 type lymphocyte suppression may play a role in the disease; however, further evidence is needed. Our patient underwent several abdominal procedures and continuous renal replacement therapy was performed. Immunosup-pressive therapy with methylprednisolone, tacrolimus, basiliximab, and antithymocyte globulin may have greatly affected the risk of mucormycosis.

After other possible causes are ruled out, in the presence of recurrent perforation due to ischemia and necrotic damage, mucormycosis should be considered in SOT patients and empirical antifungal treatment should be rapidly initiated. Although it is a rare infection, mucormycosis can result in serious morbidity and mortality. Early recognition is crucial, and the diagnostic approach is still highly based on pathological examination. Special diagnostic tests with accurate and fast results are required, and more effective therapeutic methods should be developed for better outcomes. 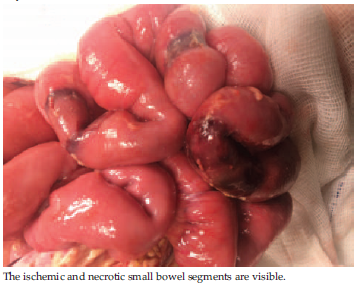 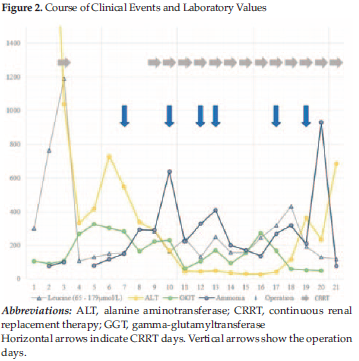 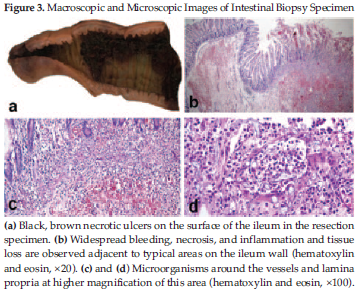 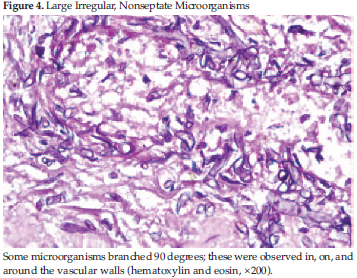 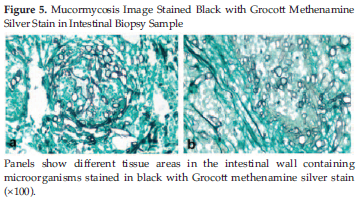