Myeloid-derived suppressor cells (MDSCs) are a heterogenous myeloid-origin population of cells that potentially suppress immunological rejection in the field of transplantation.1 There seem to be several reasons as to why MDSCs work. However, there is as yet no published study that has investigated the effect of MDSCs on intragraft donor-specific antibodies (DSA) accumulation, which is closely related to antibody-mediated rejection (ABMR).2,3 Although it is important to independently evaluate ABMR from cellular rejection, the assessment of intragraft DSA has not been fully established in a mouse model. Thus, we established a solution-based assay (immunocomplex capture fluorescence analysis [ICFA]) for accurate detection of intragraft DSA in a mouse model.4 By using this method and a mouse cardiac transplant model, we assessed the role of MDSCs in DSA production and its accumulation in the allografts. The indexes of serum and intragraft DSA were examined according to our previous report.4 In brief, mean fluorescence intensity (MFI) of samples was measured by the Luminex system. Then, index = (XH2 - (NH2 – NBB)XBB/NBB)/XBB was calculated in order to compensate the baseline reaction, where XH2 is the sample MFI, NH2 is the MFI of the negative samples, NBB is the MFI of blank beads of negative samples, and XBB is the MFI of the sample blank beads. As negative controls, the indexes of control syngeneic cardiac grafts and the associated serum crossmatch show 0.97 ± 0.03 and 0.78 ± 0.50, respectively. In this experiment, the index ≥1.5 was determined as a positive result. All experiments were conducted according to our institutional animal care protocol.

A recipient C3H mouse (H2-Kk) received a cardiac graft from a Balb/C mouse (H2-Kd) (Figure 1A). In the untreated group, both class I and class II DSA production in serum were confirmed on postoperative day 10 (POD10). By POD10, intragraft class I DSA deposition was clearly observed, whereas class II DSA started to accumulate. The indexes of intragraft of both class I and class II DSA increased toward POD21 (Figure 1B). On the other hand, 2.0 × 106 monocytic MDSCs (Ly6G-/Ly6C+/CD11b+), which were isolated from the spleens of rapamycin-treated C3H recipient mice (3 mg/kg intra-peritoneally on POD0, POD2, POD4, and POD6), were higher on POD7 than 88% purity for use as a cell therapy (Figure 1A). These MDSCs were transferred via transcoronary artery just before reperfusion, according to our previous report,5 and intravenously on POD2. As a result, the indexes of both class I and class II DSA in serum were significantly lower on POD10. Subsequent intragraft DSA deposition was also notably suppressed. On POD21, the gradual accumulations of both class I and class II DSA in serum and intragraft class I DSA deposition were confirmed, although intragraft class II DSA deposition was not clearly confirmed in the MDSC transfer group (Figure 1B). Taken together, the transfer of MDSCs may postpone DSA production, although this effect is not perpetuated. Consequently, the graft survival was slightly prolonged (8.1 ± 0.9 vs 24.1 ± 3.8 days; P < .0001). These findings suggest that MDSCs also have a potential to regulate ABMR and result in a prolonged graft survival.

Isolated assessment of ABMR seems to be difficult on several occasions. Given the early production of DSA, this transplant model in particular shows cellular rejection and ABMR mixed influences. Therefore, independent intragraft DSA detection is a feasible method to assess more precisely ABMR. This tool could facilitate research on ABMR. Furthermore, ABMR potentially leads to graft failure without effective therapeutic modalities. In such a situation, the transfer of MDSCs may become an option as a cell therapy to ameliorate ABMR, provided that disadvantages of MDSCs, such as over immunosup-pression or onset of malignant tumors, are sufficiently controlled.

From the 1Department of Organ Transplantation and General Surgery, Kyoto Prefectural University of Medicine, Kyoto, Japan; and the 2Division of Transplant Surgery, Department of Surgery, Massachusetts General Hospital, Harvard Medical School, Boston, MA, USA; and the 3Wakunaga Pharmaceutical Co., Ltd., Molecular Diagnostics Division, Akitakata City, Hiroshima, Japan
Acknowledgements: This work was supported by Japan Society for the Promotion of Science Grant 19K18066. Other than described, the authors have not received any funding or grants in support of the presented research or for the preparation of this work and have no declarations of potential conflicts of interest.
Author contributions: TN and TS designed the study, analyzed the data, wrote the manuscript, and performed the research. TN, TS, and SK each contributed new reagents or analytic tools. TN performed the mouse cardiac transplants.
Corresponding author: Tsukasa Nakamura, 55 Fruit Street, Boston, MA, Postcode: 02114
Phone: +1 6176434533
E-mail: tsukasa@koto.kpu-m.ac.jp, tnakamura4@mgh.harvard.edu 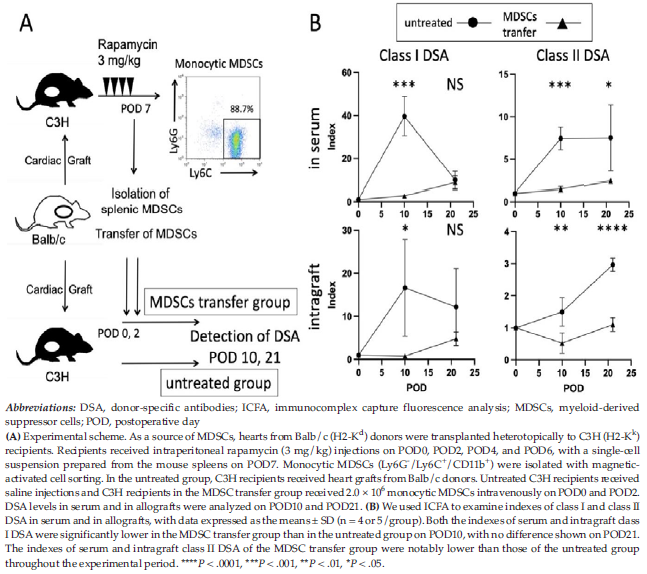