Oxidative stress (OS) is defined as the damage caused on cells by reactive oxygen species (ROS) that are produced through enzymatic and nonenzymatic reactions.1,2 The lungs are exposed to high levels of oxygen and exogenous irritants due to their location and function.3 Such exposures render the lungs prone to oxidative damage. Oxidative stress that occurs as a result of oxidant/antioxidant imbalance impairs alveolar epithelial physiology over time and leads to progressive and irreversible respiratory diseases.4 Oxidative stress caused by ROS generated as a result of the activation of inflammatory cells in the lung parenchyma is considered responsible for the severe alveolar epithelial and lung parenchymal damage present in the pathogenesis of chronic obstructive lung disease (COPD), cystic lung diseases, and idiopathic pulmonary fibrosis (IPF).1-5 Enzymatic or nonenzymatic antioxidant mechanisms come into play to counteract the harmful effects of ROS. Thiols, a key component of the antioxidant system, are organic compounds containing the sulfhydryl group that play a crucial role in preventing OS in cells.1,5 These compounds react with ROS to form disulfide bonds. The resulting disulfide bonds are reversible and can be reduced back to thiols depending on the oxidant/antioxidant status in the organism.1,6 These cellular reactions help maintain thiol-disulfide homeostasis (TDH).1 Under normal conditions, TDH has a dynamic structure, but it can be adversely affected by pathologies involving OS.1-6 Thiol-disulfide homeostasis, vital for cellular function, has recently been identified as an OS marker.5-7

End-stage lung diseases (ESLDs) with a progressive course despite all medical and surgical treatment, irreversible lung damage, and a 1- to 2-year predicted survival are indications for lung transplant. Oxidative stress is expected to be severe in patients with ESLD on the lung transplant wait list due to underlying chronic inflammation. Measure-ment of thiol levels can prove beneficial in understanding the biochemical bases of chronic progressive lung diseases and in showing the destructive effects of OS. This study investigated the oxidant/antioxidant status and serum levels of the dynamic TDH parameters native thiol (NT), total thiol (TT), disulfide, disulfide-to-TT ratio, and disulfide-to-NT ratio as new OS markers in patients with ESLD and indications for lung transplant.

Study population
This single-center, prospective, case-control study included a candidate group consisting of 40 patients with ESLD on the lung transplant wait list in our institution who enrolled voluntarily and a control group consisting of 40 healthy volunteers randomly selected from among individuals who presented to our thoracic surgery outpatient clinic for routine examination. Considering possible effects on TDH, we excluded patients with inflammatory disease; autoimmune disease; diabetes mellitus; acute and chronic kidney diseases; liver disease; cardiovascular and/or cerebrovascular diseases; history of malignancy; use of immunosuppressive drugs, lipid-lowering agents, and antioxidant substances/drugs; and alcohol and smoking habits. The study was terminated when the planned volunteer numbers for the control and candidate groups were reached. The study lasted 11 months, during which transplant candidates were followed up.

Dynamic TDH parameters were measured from blood samples taken from patients in the candidate and control groups using a novel and fully automated method defined by Erel and colleagues.1 We recorded the patient disulfide, NT, TT, disulfide/NT, disulfide/TT, and NT/TT results, as well as demographic data, including age, sex, and body mass index (BMI). Laboratory data were also recorded, including white blood cell (WBC) count and C-reactive protein (CRP) levels. The candidate and control groups were compared for all these parameters.

For all patients in the candidate group, we recorded the forced expiratory volume in 1 second (FEV1), forced vital capacity (FVC), 6-minute walk test (6MWT), and systolic pulmonary artery pressure (sPAP) via right heart catheterization results. In addition, we calculated the lung allocation score (LAS), commonly used to determine priority for lung transplantation, for all transplant candidates. The clinical relationship between the TDH parameters and LAS was investigated.

The Ankara City Hospital Ethics Committee approved our study (approval number E1-21-1789). All participants in the study provided their informed consent. The investigators complied with the ethical principles of the Declaration of Helsinki.

Measurement of thiol-disulfide homeostasis parameters
To measure TDH levels, blood samples were collected after 8 hours of fasting, centrifuged at 1500 revolutions/min for 10 minutes, and stored at -80 ºC. We used the automated spectrophotometric method for TDH measurements. Reducible disulfide bonds were reduced to form free functional thiol groups. Formaldehyde was used to remove residual sodium borohydride and 5.5′-dithiobis- 2-nitrobenzoic acid products. Next, both reduced thiol and NT groups were determined. The number of dynamic disulfide bonds was found by taking half of the difference between the TT and NT groups. After determining NT, TT, and disulfide levels, disulfide/TT, disulfide/NT, and NT/TT ratios were calculated.

Statistical analyses
We encoded and recorded the data via the IBM SPSS for Windows version 22.0 software package. To examine the conformity of the variables to normal distribution, we used descriptive statistical methods (mean, standard deviation, median, frequency, and ratio) as well as Shapiro-Wilk test, skewness and kurtosis statistics, histograms, and box plots. The Kruskal-Wallis test and the one-way analysis of variance were used to compare nonnormally and normally distributed parameters, respectively. We performed the Dunn test with the Bonferroni correction for post hoc analysis and the Mann-Whitney U test and t test for group comparisons. The Wilcoxon signed-rank test was used to compare 2 related samples. The chi-square test was conducted for independent group comparisons for categorical variables. Spearman and Pearson correlation methods were used to investigate associations between LAS and other parameters. The enter method and simple and multiple linear regression analyses were used to identify factors that independently predicted LAS. The confidence interval was set at 95%. P < .05 was considered significant.

Table 1 shows demographic characteristics, laboratory data, and TDH parameters of the candidate and control groups. The groups were similar in terms of age, sex, and BMI (P > .05). The WBC and CRP levels in the candidate group were higher than in the control group (P < .001) (Table 1).

With regard to TDH parameters, NT and TT levels in the candidate group were lower than in the control group (P < .001 and P = .001, respectively) (Figure 1). We observed no statistically significant difference between the groups in disulfide levels (P = .433) (Figure 1). The disulfide/NT and disulfide/TT ratios were higher and the NT/TT ratios were lower in the candidate group than in the control group (Table 1).

Lungs are the organs most exposed to OS due to their direct contact with the external environment.3-5 Reactive oxygen species are responsible for OS, and their role in lung diseases has been extensively studied.1-5,8-16 These excess unstable oxidants in the airways cause cellular damage and conformational changes in structural proteins, activating tissue damage-associated proteases that degrade the lung parenchymal connective tissue components.3,17,18 Through chronic progression, these effects cause irreversible pulmonary fibrosis.1-5 There are various antioxidant defense mechanisms against such adverse oxidative effects during normal metabolic processes.19,20 Understanding the function of thiols, an essential element of the plasma antioxidant system, may prove crucial in unraveling the pathophysiology of chronic respiratory diseases where OS features prominently.1,5,15,16,20

There is limited published literature on oxidant/antioxidant imbalance in the etiopathogenesis of chronic progressive lung diseases. Studies investigating dynamic TDH in COPD have reported lower TT levels in patients than in healthy individuals, associating the parameter with the progression of the disease.5,21-23 Other studies have indicated oxidative modifications in thiol and similar antioxidant proteins due to OS products.3,17,18 Therefore, the decrease in plasma thiol concentrations is acknowledged as a crucial marker of OS in lung diseases.5,12,21-24

To our best knowledge, the present study is the first to compare TDH parameters in lung transplant candidates with ESLD versus healthy controls and to compare these parameters among ESLD primary disease subgroups. We observed that the levels of NT and TT, the antioxidant parameters of TDH, were significantly lower in our candidate group than in our control group. In contrast, the disulfide/NT and disulfide/TT ratios, the oxidant parameters, were significantly higher. Hence, TDH is altered in favor of oxidants in patients with ESLD, resulting in increased OS. However, we did not detect a significant difference between our candidate and control groups with regard to disulfide levels. Nevertheless, the significantly lower levels of NT and TT in our patients with ESLD support the hypothesis that excess free radicals in chronic inflammation give rise to conformational changes in antioxidant proteins over time.

Reactive oxygen species, OS resulting from pulmonary oxidant/antioxidant imbalance, and activation of tissue damage-associated proteases are considered concurrent factors in the etiopathogenesis of chronic progressive lung diseases.3,5,15,21-23 In a study on TDH parameters among patients with moderate COPD, asthma, and asthma-COPD overlap syndrome, Babao?lu and colleagues noted similar TDH-related biochemical parameters for these 3 disease groups.15 Kinnula and colleagues indicated common mechanisms of damage secondary to OS in both obstructive and fibrotic lung diseases.3,11 In the present study, we found statistically similar oxidant/antioxidant status in all ESLD subgroups, implying that OS can reach extreme levels in patients with ESLD regardless of the primary disease.

In end-stage progressive and irreversible lung diseases, FEV1, FVC, 6MWT, and LAS are essential parameters to evaluate the severity of the disease and the need for transplant. In our study, we observed moderate correlations between the antioxidant parameters of TDH and FEV1, FVC, 6MWT, and LAS. In patients with asthma, Nar and Çal?? had also emphasized that FEV1 and FVC parameters were significantly correlated with NT and TT levels.16

The LAS, developed to shorten donor organ wait times for lung transplant candidates and ensure urgency-based allocation, is used by clinicians to determine posttransplant survival benefit by considering disease severity, clinical course, 1-year wait list survival probability, and 1-year post-transplant survival probability.25,26 The score is calculated based on patient parameters such as age, primary diagnosis, BMI, comorbidities, pulmonary function test, 6MWT, sPAP, and oxygen and respiratory support requirements. An increase in LAS, which ranges from 0 to 100 points, corresponds to an increased need for transplant. Accordingly, patients with high LAS are expected to have high OS as well. In line with that, our multiple regression analyses showed that NT or TT were significant predictive factors to estimate LAS. The antioxidant TDH parameters can be easily measured using automated spectrophotometric methods from blood taken after 8 hours of fasting. These biochemical measurements can be routinely used in the clinical arena to assess transplant needs and predict the prognosis of transplant candidates during the waiting period. Thus, instead of measuring many parameters required for LAS calculation, the measurement of TDH parameters, which can be accessed more easily and quickly, may be preferred.

To the best of our knowledge, there is not yet a study examining the effects of lung transplant on intense OS in transplant candidates. In our study, despite the small number of patients, it was remarkable that the antioxidant parameters of TDH increased in patients who were stabilized after lung transplant compared with before transplant.

In end-stage, chronic, progressive lung diseases, the dynamic TDH status was altered, with favoring of oxidants. Thus, biochemical parameters related to TDH can be used to detect OS in chronic lung diseases. The antioxidant indicators of TDH can be used to estimate LAS in patients with ESLD with indications for lung transplant. Lung transplant may have positive effects on OS in transplant candidates. In addition, interventions that can improve thiol levels may prevent pathological processes arising from the deterioration of TDH. 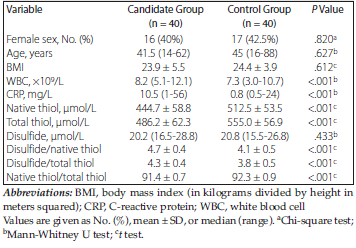 Figure 1. Distribution of Native Thiol, Total Thiol, and Disulfide Levels According to Diagnoses 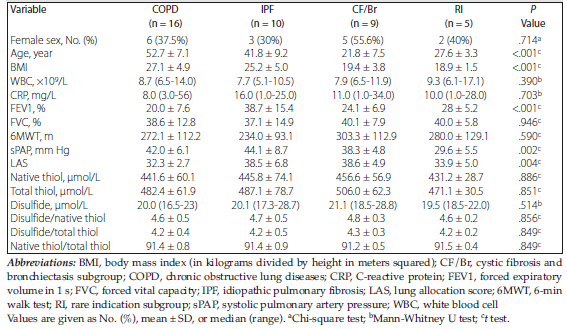 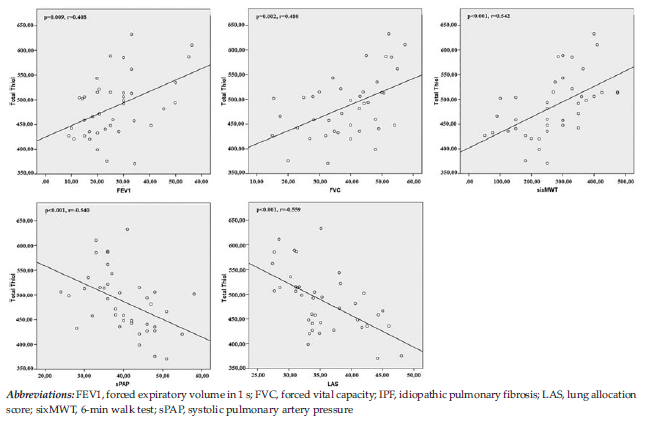 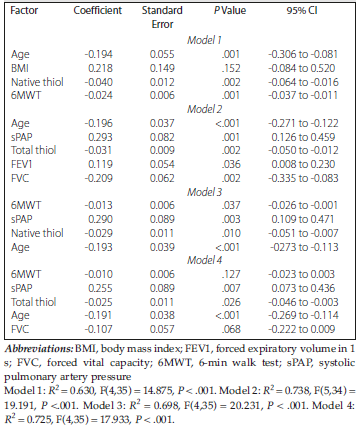 Table 5. Comparison of Thiol-Disulfide Homeostasis Parameters Before and After Transplant