In the living donor liver transplant (LDLT) model, it is vital to understand and maintain awareness of the hepatic artery (HA) anatomy and its variants to achieve successful outcomes for both donor and recipient; however, variant HA anatomy is generally not a contraindication for liver donation. The classification described by Michels is the most frequently used classification system for HA anatomy with its variations.1 In the normal HA pattern, the common HA originates from the celiac artery to form the proper hepatic and gastroduodenal arteries. The proper HA divides into right and left branches that supply the right and left liver lobes, respectively.2 However, anatomical variations of the HA are common, and between 24% and 45% of the general population have HA variants.1,2 In this case report, we present a rare variation of the right HA (RHA) that we detected during a living liver right lobe hepatectomy.

A 59-year-old man with alcoholic liver cirrhosis underwent LDLT. His body weight was 63 kg with a body mass index (weight in kilograms divided by height in meters squared) of 24.9, and the Model for End-Stage Liver Disease score was 19. The patient’s niece (a 47-year-old woman) volunteered to be a living donor. Her total and remnant liver volumes were 1179 and 404 mL, respectively. The remnant liver volume ratio was 34.3%, and the graft-to-recipient weight ratio was 1.3%. For the preoperative donor evaluation, we performed multidetector computed tomography scan and magnetic resonance imaging, including magnetic resonance cholangio-pancreatography. The HA variation was type I according to the classification system by Michels (Figure 1A), and the bile duct variation was type A1 according to the Huang classification.3 Donor right hepatectomy was performed according to the technique that has previously been described.4 Briefly, the right hepatic lobe was fully mobilized, and a liver-hanging maneuver was performed. The right portal vein and RHA were encircled and temporarily clamped to provide a demarcation line on the liver surface. For the liver parenchymal transection, we used a Cavitron Ultrasonic Surgical Aspirator (Valleylab). During the hilar dissection, we noticed that the paths of the anterior and posterior branches of the RHA were anterior and posterior to the common hepatic duct (CHD), respectively (Figure 1A, B, C, and D). The right anterior HA and the RHA were divided separately (Figure 1E). In the recipient operation, we used the operating microscope to facilitate arterial reconstruction with interrupted 8-0 nylon sutures in both arteries (Figure 1F). The postoperative period was uneventful for both donor and recipient.

We checked preoperative computed tomography scans to investigate the presence of this anatomical variation, and we noticed that the origin points of the anterior RHA and posterior RHA occurred substantially distant from the entry points into the liver parenchyma (Figure 1A). There are 2 maneuvers that may resolve this structural problem. The first option is transection and reanastomosis of the CHD, but this procedure jeopardizes the safety of the donor. Because donor safety is a major concern in LDLT, we recommend to avoid the risky segments at the hilar area and thereby improve the safety factor for the donor. The second option is to divide the right anterior artery in addition to the RHA, which requires 2 arterial reconstructions in the recipient operation. In the present case, we preferred the second maneuver, and we proceeded with the microvascular anastomosis in both arteries. The HA reconstruction is a challenging procedure in recipients of partial liver grafts because the diameter of the graft arteries is small. Hepatic artery thrombosis is considered to be the most catastrophic complication during this procedure, which may lead to graft loss and require retransplant. Arterial complication rates are dramatically lower with the application of microvascular surgery.6

Awareness must be maintained of this rare anatomical course of RHA, as described in this report, especially in living liver right lobe donors. For donors with rare variations, the LDLT procedure should be performed by an experienced team, to best ensure safety for the donor and a successful outcome for the recipient.

From the 1Department of Organ Transplantation, the 2Department of General Surgery, and the 3Department of Plastic, Reconstructive and Aesthetic Surgery, Akdeniz University School of Medicine, Antalya, Turkey
Acknowledgements: The authors have not received any funding or grants in support of the presented research or for the preparation of this work and have no declarations of potential conflicts of interest.
Corresponding author: Ali Avanaz, Department of Organ Transplantation, Akdeniz Üniversitesi Tip Fakültesi Hastanesi, Pinarbaşi, 07058, Konyaalti/Antalya, Turkey
Phone: +90 530 292 92 05
E-mail: aliavanaz@hotmail.com 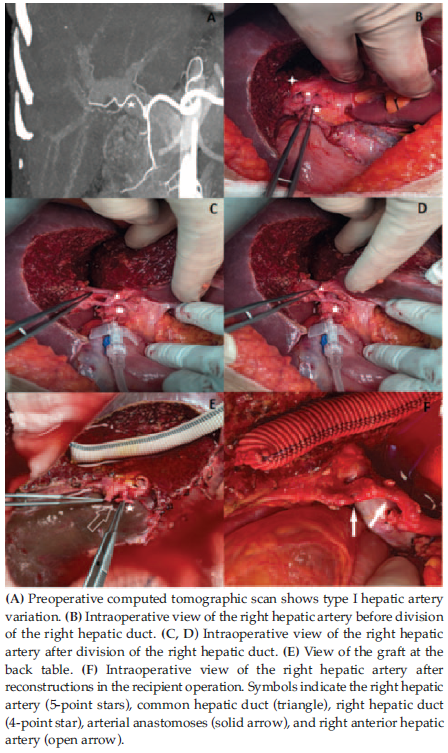