Objectives: This was a retrospective analysis of liver transplant for pediatric patients with liver cirrhosis and hepatocellular carcinoma.
Materials and Methods: Fourteen pediatric patients with chronic liver disease and hepatocellular carcinoma underwent liver transplant from 2004 to 2021. Preexisting diseases were tyrosinemia (n = 6), progressive familial intrahepatic cholestasis type 2 (n = 2) and type 3 (n = 3), cryptogenic cirrhosis (n = 2), hepatitis B and D (n = 1), and biliary atresia (n = 1).
Results: Mean age was 9.43 ± 4.9 years (range, 13 months to 16 years). Three patients had 1 tumor, 4 had 2 tumors, and 7 had multiple (≥3) lesions. Six patients were classified as Pretreatment Extent of Disease Staging System for Hepatoblastoma (PRETEXT) stage IV, 3 as stage II, and 5 as stage I. Some patients received systemic chemotherapy before (n = 4) or after transplant (n = 3) or transarterial chemoembolization and microwave ablation pretransplant (n = 1). Hepatocellular carcinoma posttransplant recurrence was observed at 23, 47, and 108 months in 3 patients (21%). Recurrence sites were omentum (n = 1) and liver graft (n = 2). One patient was treated with hepatic resection, radiofrequency ablation, and radiotherapy, while the other received radiofrequency ablation and chemotherapy for graft tumor recurrence. Relapse-free patient survival rates were 92%, 82.5%, and 72.2% at 2, 4, and 10 years, respectively. Four recipients (28.5%) died; posttransplant cause of death was infection at 19 (n = 1) and 188 months (n = 1) or hepatocellular carcinoma recurrence at 79 (n = 1) and 165 months (n = 1). Median follow-up was 178 months (range, 13-204 months). Mean estimated survival was 171.25 ± 16.6 months. Overall patient posttransplant survival was 100%, 92.3%, 92.3%, 83%, and 72% at 1, 2, 5, 10, and 15 years, respectively.
Conclusions: Hepatocellular carcinoma was mainly associated with inherited liver diseases in our pediatric series. Liver transplant provided a long-term survival advantage to pediatric patients with preexisting cirrhosis and hepatocellular carcinoma.

Hepatocellular carcinoma (HCC) is a rare tumor in children compared with hepatoblastoma.1 Primary HCC is an aggressive chemoresistant liver tumor seen in late childhood, mainly in geographic regions with endemic hepatitis B (HBV) infection. However, children with underlying liver diseases are at risk of chronic liver damage that may result in malignant transformation. In countries with high consanguineous marriages rates, several inherited liver diseases that predispose to HCC are frequently seen.

Prevention of HCC development has been improved with HBV vaccination, dietary management, and treatment modalities of several inherited metabolic disorders and infectious diseases in children. Early diagnosis of HCC and timely liver transplant (LT) are the main goals of pediatric hepatologists in children with chronic liver diseases. Total hepatectomy followed by LT is the best treatment option for HCC in most children with underlying chronic liver disease.2 Since the biologic behavior of HCC in children appear to be different from the behvaior observed in adults, favorable response to treatment and favorable long-term LT outcomes are expected in pediatric patients.

Herein, we reviewed 17 years of experience at our center with pediatric patients who had HCC in the setting of liver cirrhosis and were treated with LT.

A total of 14 children (8 male, 6 female) with underlying cirrhosis and HCC underwent LT at Başkent University Faculty of Medicine from 2004 to 2021.

During that period, 282 pediatric LTs were performed. Liver transplant for pretransplant diagnosed HCC was performed in 12 of 282 patients (4%). Two patients aged 13 and 15 months with type 2 progressive familial intrahepatic cholestasis (PFIC2) were incidentally diagnosed with HCC based on the hepatectomy specimen results. No patient underwent transplant for primary HCC. Pretransplant diagnostic assessment included Doppler ultrasonography, thoraco-abdominal computed tomography, abdominal magnetic resonance imaging, bone scintigraphy and alpha-fetoprotein (AFP) serum levels. Postoperative tumor pathology, recurrence-free survival, and overall survival rates were recorded. According to our hepatic transplant department’s policy, LT is applied to children with HCC if they have no pretransplant distant metastases or major tumor thrombi, regardless of the number and size of the HCC nodules. The Pretreatment Extent of Disease Staging System for Hepatoblastoma (PRETEXT) from the International Childhood Liver Tumor Strategy Group was applied. Patient survival and recurrence-free survival were analyzed. Histology grading of HCC was assessed according to Edmondson-Steiner system. Patients were followed up closely by the departments of pediatric hepatology, transplant, and pediatric oncology. For detection of tumor recurrence after LT, patients were evaluated with ultrasonography, computed tomography, and AFP levels. Data collection and evaluation were approved by our institutional review board. Written informed consent was obtained from patients or their guardians.

Statistical analyses
Survival rates were calculated by the Kaplan-Meier method with a minimum follow-up of 12 months. Data were analyzed with SPSS software (version 23.0).

Eight pediatric patients had Child (also known as Child-Turcotte-Pugh) scores in class A, 4 were Child class B, and 2 were Child class C cirrhosis. Median PELD score was 0 (range -10 to 20) for Pediatric End-Stage Liver Disease (PELD) and Model for End-Stage Liver Disease (MELD) ranged from -10 to +20. Six of tyrosinemia patients had Child class A cirrhosis, 4 of whom were on nitisinone treatment that was initiated at the age of 9 to 72 months due to late diagnosis. The AFP levels were elevated in 11 of 14 patients. Median AFP level was 67 ng/mL (range, 1.44-58 000 ng/mL). Regimens of 1 to 4 cycles of systemic chemotherapy including cisplatin, adriamycin, and doxorubicin (known as PLADO) combinations were given to 4 pediatric patients with tyrosinemia before referral to our institute for transplant. One patient received transarterial chemoembolization (TACE) and microwave ablation (MWA) before LT while waiting for a deceased donor.

Two pediatric patients received living donor grafts from first-degree relatives, and 2 patients received grafts from deceased donors. Right lobe (for 2 patients) or left lateral or left lobe grafts were transplanted. Edmondson-Steiner grade 1 HCC was detected in 10 patients, and grade 2 HCC was detected in 4 patients in hepatectomy specimens. All 14 patients had cirrhosis on histopathology examination. None of the patients had distant metastasis or extrahepatic disease. Lymph node specimens taken during transplant surgery were free of tumors. Neither macrovascular nor microvascular involvement or portal vein tumor thrombosis was detected.

Three patients had a single lesion, 4 had 2 lesions, and 7 had multiple lesions (ie, 3 or more). Tumor sizes are shown in Table 1. Hepatocellular carcinoma was detected in the right lobe in 6 patients and in both lobes in 7 patients. Only 1 patient had HCC confined to the left lobe. Six patients were classified as PRETEXT stage IV, 3 as stage II, and 5 as stage I.

After LT, 1 patient (No. 14 in Table 1) received chemotherapy. Unfortunately, the patient could not tolerate the adjuvant chemotherapy regimen, so treatment was ceased in response to neutropenia and recurrent bacterial sepsis episodes. Two patients diagnosed with HCC recurrence received chemother-apy at our oncology department. After LT, all patients received prednisolone, mycophenolate mofetil, and tacrolimus according to current protocols applied in our hospital. The switch from tacrolimus to the mTOR inhibitor means mammalian target of rapamycin sirolimus was initiated in 3 patients after LT for HCC recurrence.

Oncological outcome and death after transplant
Tumor recurrence was observed in 3 patients (21%). Recurrence was detected at 22, 47, and 108 months after LT in these pediatric patients (Figure 1). Recurrence sites were omentum in 1 patient and transplanted liver graft in 2 patients. The patient with HCC recurrence in omentum was successfully treated with omentectomy and has survived.

Another patient with PFIC3 had HCC recurrence in the liver graft, satisfied the Milan criteria, and was PRETEXT stage II. Her PELD score was 20 with a very high AFP level (58 000 IU/mL) before LT. She received RFA twice and 6 courses of PLADO chemotherapy after recurrence. Unfortunately, the patient died from liver failure due to chronic rejection and tumor progression after 45 months of LT.

Another patient with tyrosinemia also satisfied the Milan criteria and was PRETEXT stage I. His AFP levels were high (24 727 IU/mL) before LT, and AFP levels were normal after LT. During follow-up, this patient’s AFP levels gradually increased without any detectable lesions. Interestingly, the first tumor recurrence was detected in the liver graft after 108 months (9 years) of LT. Treatment with hepatic resection, RFA, and radiotherapy were applied. Unfortunately, the patient died from secondary effects of several distant metastases in the lung, bone, salivary glands, and dura mater. In our series, HCC survival rates for recurrence-free patients were 92% at 2 years, 82.5% at 4 years, and 72.2% at 10 years.

The United Network for Organ Sharing 2010 annual report database included 58 pediatric HCC patients who underwent LT from 1987 to 2007. In this report, survival rates were 85% at 1 year, 68.8% at 5 years, and 53.5% at 10 years.3 Hamilton and colleagues4 reported revised data from the United Network for Organ Sharing that showed a 5-year survival rate of 63% for 84 pediatric patients with HCC who underwent LT from 1987 to 2012. They concluded there was a significant improvement in posttransplant patient and graft survival for children and adolescents with primary hepatic malignancies. However, patients with HCC continue to have worse outcomes versus patients with other cancer types. Survival rates were higher in pediatric HCC patients who underwent LT than in those without transplant at 1 year and 4 years (72% and 72% vs 33% and 16.6%, respectively).5 In 2008, our group reported 100% recurrence-free status and 100% overall survival rates in 9 pediatric transplant recipients after 19.8 ± 10.6 months (range, 7-32 months) of follow-up.6 Herein, we report our long-term follow-up results of 14 pediatric liver transplant recipients with a median follow-up time of 169 months (range, 13-204 months) in the past 17 years. In our series, the overall patient survival rates after LT were 100% at 1 year, 92.3% at 2 years, 92.3% at 5 years, 83% at 10 years, and 72% at 15 years. All of the patients had preexisting liver cirrhosis caused mainly by underlying inherited diseases. Liver transplant offered a remarkable survival advantage against cirrhosis and HCC in our series. We observed late tumor recurrence in the liver graft in 2 patients who satisfied the Milan criteria, but it is possible that these results were caused by undetected tumor cells in the circulation.

Hepatocellular carcinoma was mainly associated with inherited liver diseases in our pediatric series. Type 1 tyrosinemia and PFIC2 predispose very young pediatric patients to the risk of HCC. In 2006, Arikan and colleagues5 reported their experience in a cohort of 13 pediatric patients with HCC, 7 of whom underwent LT. In their series, the most associated conditions were type 1 tyrosinemia and chronic HBV infection. In the past 10 years, there has been a decline in HCC rates due to the application of nitisinone treatment for tyrosinemia patients in our country. Hepatitis B infection in pediatric patients is rare due to the national vaccination program started in 1997 in Turkey. In our series, there was only 1 pediatric patient with HBV/HDV-related cirrhosis and HCC in our hospital in 2004.

Well-differentiated HCC was previously defined in 2 cases with PFIC3 (multidrug-resistant protein 3 deficiency).7,8 Herein, we also describe 2 additional PFIC3 cases with HCC. School-aged children with PFIC3 are predisposed to HCC development, and close monitoring is necessary. We consider multidrug-resistant protein 3 deficiency as a risk factor for HCC development both in pediatric and adult patients.

Transarterial chemoembolization and MWA therapy were successful in a pediatric patient with PFIC3 who had 2 HCC nodules while waiting for a deceased donor (Table 1). After 8 months, a deceased donor became available for this patient, and the explanted liver did not show any viable tumor tissue. The patient has survived and receives routine follow-ups. Weiss and colleagues9 reported their experience with 8 pediatric patients for whom TACE application with unresectable HCC was safe and effective for management of hepatic tumors and downstaging and bridging to LT. The MWA procedure results in thermal tumor destruction by the induction of an alternating electric current. Although multimodal treatments of HCC have not been well studied in pediatric patients, we report satisfactory treatment outcomes in our series.

European Liver Transplant Registry data for HCC showed better 5-year and 10-year survival rates for pediatric patients with HCC with inherited liver disease (81% and 81%, respectively) compared pediatric patients with HCC without inherited liver disease (53% and 45%, respectively).10 For pediatric patients with underlying inherited liver disease, regular follow-ups may contribute to early HCC detection and earlier LT compared with patients who have primary HCC. Early diagnosis of HCC is associated with favorable prognosis and treatment outcomes. Our 17 years of experience has shown that liver cirrhosis with HCC complications can be treated successfully with LT. To improve success rates after LT, early diagnosis and close recurrence monitoring and treatment are the main points of focus during follow-up. 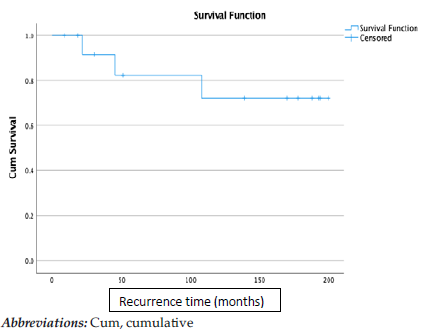 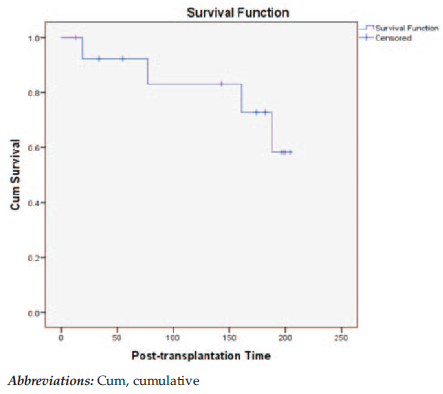