Lung transplant is a last resort treatment option for patients with end-stage lung diseases who are unresponsive to maximum medical therapy. The procedure significantly improves patients’ quality of life and survival rates. Despite advances in surgical techniques and immunosuppressant therapy, survival rates remain lower in lung transplant recipients than in other solid-organ transplant recipients.1 The causes of low survival rates among lung transplant recipients are primary graft dysfunction, acute rejection, and high mortality due to infections in the early period, as well as chronic lung allograft dysfunction (CLAD) in the late period. In addition to alloimmunologic damage, the vast epithelial surface of the lung and its constant contact with the external environment are risk factors for graft damage.2 Non-alloimmunologic factors such as toxic agent inhalation, infections, and gastro-esophageal reflux are thought to cause lung graft damage.1,2 These factors are related to the release of inflammatory mediators from various cells, such as epithelial cells, monocytes, macrophages, neutrophils, eosinophils, and dendritic cells. Increased reactive oxygen species (ROS) production and disrupted oxidative balance result from inflammatory mediators.3,4

Reactive oxygen species are unstable compounds with unpaired electrons that can initiate oxidation.5 Although ROS play an essential role in regulating many cellular and enzymatic reactions at low concentrations, they have a toxic effect on all cell elements, especially lipids, proteins, and nucleic acids at high concentrations.6,7 Damage from ROS can only be limited by oxidative balance.2 Physiologically produced oxidants exceed cells’ endogenous anti-oxidant capacity, and the disruption of intracellular redox homeostasis causes oxidative stress. Thiol is an organic compound that plays a critical role in protecting cells from oxidative stress.8 Thanks to its sulfhydryl content, thiols can eliminate ROS.9 The formation of reversible disulfide bonds is caused by thiol oxidation with oxidant molecules. When the oxidative stress condition is over, the disulfide bond structures formed can be reduced to thiol groups again, thus providing a dynamic thiol-disulfide balance.10 The relationship between oxidative stress and lung damage due to ischemia-reperfusion injury has been examined in many studies.11-16 However, there are few studies in the literature on long-term oxidative balance status in lung transplant recipients. In this study, we investigated dynamic thiol-disulfide homeostasis (TDH) as a new indicator of oxidative stress in lung transplant recipients. In addition, we compared dynamic TDH parameters according to the transplant indication and time after transplant.

Settings and study design
This single-center observational study was approved by our Institutional Ethics Committee (approval no. E1-21-1735). Written informed consent was obtained from all participants. All authors confirmed compliance with the World Medical Association Declaration of Helsinki on the ethical conduct of research involving human subjects.
We excluded recipients with single lung transplant, cystic fibrosis, active infections (bacterial, viral, or fungal), newly diagnosed acute cellular rejection, CLAD, acute or chronic kidney disease, heart failure, and liver dysfunction, as well as those who used antioxidants or herbal supplements. Lung transplant recipients with irreversible reduction (>20%), as measured by the best forced expiratory volume in 1 second, were not included in the study. As a result, 34 lung transplant recipients using the same immunosuppressant regimen consisting of a calcineurin inhibitor (tacrolimus), cell cycle inhibitor (mycophenolate mofetil), and low-dose systemic steroid (methylprednisolone) were included in the study. In addition, we also had a control group comprising 36 healthy volunteers randomized by age, sex, and body mass index (BMI; in kilograms divided by height in meters squared) and having no history of comorbidities or recent (within 1 month) trauma. No participants in the volunteer group were using antioxidants or herbal supplements, and none had a history of smoking more than 10 cigarette packages per year, inflammatory disease, autoimmune disease, diabetes mellitus, acute or chronic kidney disease, liver disease, cerebrovascular disease, or malignancy.

Lung transplant recipients were categorized according to their transplant indications and time after transplant. The dynamic TDH parameters were compared between the subgroups. Regarding the indications, the recipients were divided into 4 categories: chronic obstructive pulmonary disease (COPD), interstitial lung disease (ILD), bronchiectasis, and other indications. Two patients with lymphan-gioleiomyomatosis and 1 with histiocytosis X and Kartagener syndrome were included in the group of other indications. With regard to time after transplant, recipients were divided into the following 4 groups: >6 and ≤24 months, >24 and ≤48 months, >48 and ≤72 months, and >72 months posttransplant. Dynamic TDH parameters were compared
among the groups (Table 1). Age, sex, BMI, and laboratory results of all participants were noted. Time after transplant, actual pulmonary function test results, and 6-minute walk test results were also recorded.

Measurements
Blood samples were obtained and placed into serum separator tubes after participants had fasted for 8 hours. The samples were centrifuged at 1600g for 10 minutes to obtain serum. Serum samples were stored at -80 °C until all results were analyzed together. Dynamic TDH parameters were measured with a fully automated spectrophotometric technique recently developed by Erel and Neselioglu.10 The technique is based on reducing dynamic disulfide bonds (-S-S-) to functional thiol groups (-SH). With the sodium borohydride (NABH4) used for this purpose, disulfide bonds are chemically reduced, and free and functional thiol groups (-SH) are formed. Sodium borohydride residues are removed with formaldehyde. Thus, the reduction of 5,5'-dithiobis-2-nitro benzoic acid (DTNB) and the reduction of disulfide bonds formed by the interaction of DTNB are prevented. We used DTNB to measure all thiol groups, both reduced and native. The total thiol content in the samples was measured using modified Ellman’s reagent. Half of the difference betweentotal thiol and native thiol gave the dynamic disulfide amount. After the native thiol, total thiol, and disulfide levels were determined, we calculated the disulfide-to-total thiol ratio, the native thiol-to-total thiol ratio, and the disulfide-to-native thiol
ratio.

Statistical analyses
All analyses were performed using IBM SPSS Statistics for Windows, version 22.0 (SPSS Inc). Descriptive results are presented as frequencies and percentages for categorical variables and as means and standard deviations for numerical variables. Descriptive statistical methods (eg, mean, SD, median, frequency, and ratio) and Shapiro-Wilks test, histograms, and box plot charts were used to evaluate the distribution of the variables. Independent group comparisons were made with the Mann-Whitney U test and the t test according to the nonparametric and parametric distribution of the variables. Comparisons of dynamic TDH parameters in multiple groups were made with the Kruskal-Wallis test and one-way analysis of variance test. Post hoc tests were performed with the Dunn and Bonferroni tests. Spearman correlation test was used to analyze the correlation between TDH parameters and other parameters. All analyses were performed as 2-sided hypotheses with a 5% significance level and a 95% confidence interval. A 2-tail P < .05 was considered statistically significant.

Oxidative stress plays a role in the physiopathology of various lung diseases, such as asthma, COPD, lung fibrosis, cystic fibrosis, and lung cancer.16,17 It is also known that systemic inflammation, one of the most common complications in lung transplant recipients, is involved in the pathogenesis of cardiovascular diseases and malignancies.18,19 A number of studies have associated oxidative stress with varying degrees of CLAD in lung transplant recipients.2,20,21

Dynamic thiol-disulfide balance is essential in antioxidant defense and detoxification, apoptosis and enzyme activities, regulation of transcription, and cellular signal transduction mechanisms.9,10,22 Abnor-mal dynamic TDH is associated with many diseases, such as diabetes mellitus, cardiovascular diseases, kidney failure, asthma, COPD, and cancer.23-26 It has been shown that native thiol levels decrease linearly with the application of oxidation processes. Therefore, dynamic TDH measurements can be used to demonstrate the oxidative status in plasma clinically.10 In the present study, we used a recently developed automated measurement technique that provides a comprehensive assessment of dynamic TDH parameters. Before this novel technique, thiol and disulfide concentrations could be measured with low-molecular-weight compounds, such as cysteine, reduced glutathione, and oxidized glutathione, which constitute a small part of the thiol pool in the human body. The new measurement system can provide valuable information about the physiopathological and biochemical processes of diseases in lung transplant recipients.

With regard to transplant indications, total thiol and disulfide levels were lower in the COPD group than in the ILD, bronchiectasis, and other indication groups. However, there was no difference in terms of other dynamic TDH parameters. These results suggest that the dynamic TDH changes in favor of disulfide in lung transplant recipients regardless of the indications for lung transplant. Although total thiol levels were lower in the COPD group, we observed no difference between disulfide-to-total thiol, disulfide-to-native thiol, and native thiol-to-total thiol ratios. The higher mean age can explain the low amount of total thiol and disulfide in the COPD group. We also found moderate negative correlations between age and total thiol, native thiol, and disulfide in our study. Similarly, Ate? and colleagues reported a positive correlation between oxidative stress and age and found decreased native thiol levels with age.24 Babao?lu and colleagues indicated a negative relationship between age and total and native thiol.26 According to our results, thiol-related oxidative stress increases with age and dynamic TDH changes in favor of disulfide.

Our study has 2 main limitations. The first one is the small sample size. The second is the absence of assessments regarding other oxidant and antioxidant markers. 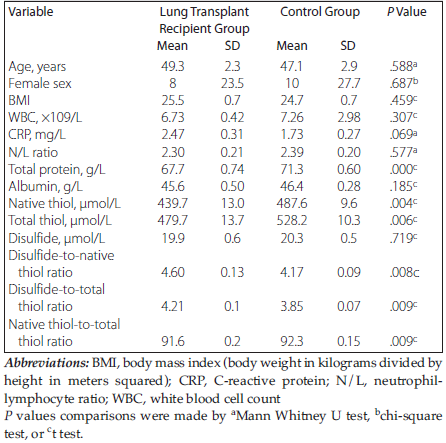 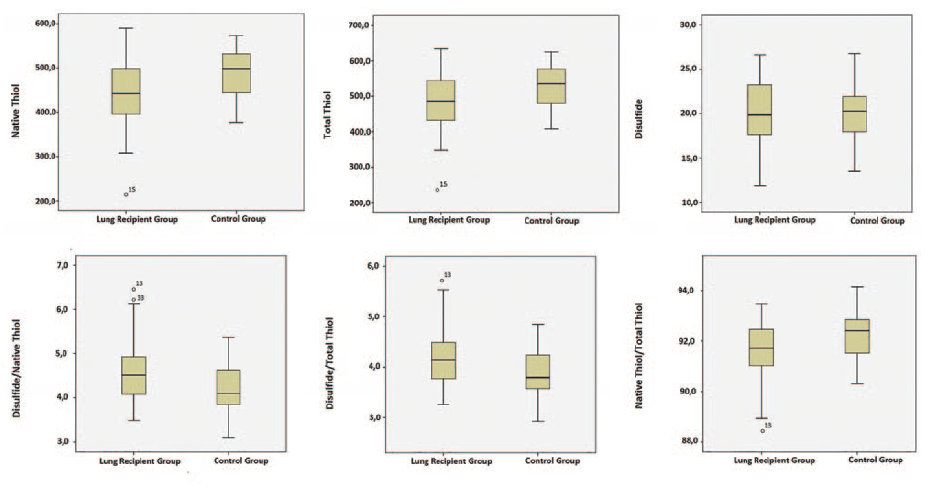