Cardiovascular disease (CVD) remains the most prevalent cause of death in patients with end-stage renal disease (ESRD).1 Uremic toxin accumulation, inflammation, sympathetic activation, endothelial dysfunction, coagulation disorder, and vascular calcification account for the high risk for CVD in patients with ESRD.2 Kidney transplant (KT) has been shown to reduce cardiovascular mortality versus maintenance dialysis, but cardiovascular mortality for KT recipients has remained higher than for the general population.3 Kidney transplant has been shown to mitigate negative effects attributed to ESRD but also creates several new risks for CVD.3,4 Posttransplant hypertension, diabetes mellitus, obesity, and some characteristics of immunosup-pressants have all been shown to have substantial effects on CVD after KT.3,4 The vascular reactivity index (VRI) is assigned by means of the digital thermal monitoring test, which measures tempe-rature changes during transient artery occlusion and has been used as a noninvasive test for endothelial function in several studies.5,6

Adiponectin, which is mainly produced by sub-cutaneous adipose tissue, protects the endothelium from inflammation and atherosclerosis and has cardioprotective implications for CVD.7,8 Clinical studies have noted that low serum levels of adipo­nectin are correlated with the risk of cardiometabolic diseases.9,10 Endothelial injury is associated with ischemia-reperfusion injury, alloantibodies, and autoantibodies in KT and with adverse kidney graft outcomes.11 Although adiponectin exerts anti-inflammatory and anti-atherogenic effects on CVD, loss of kidney function has been shown to disrupt the association between adiponectin and vascular health. The association between serum adiponectin and endothelial dysfunction in the KT population has rarely been reported. Therefore, we aimed to determine the association between serum adiponectin levels and the endothelial function by observing the VRI values among KT patients.

Participants
This study used a cross-sectional design. All KT recipients for this cross-sectional study were recruited from September 2015 to February 2016 at a medical center in Hualien, Taiwan. This study was approved by the Research Ethics Committee of Hualien Tzu Chi Hospital, Buddhist Tzu Chi Medical Foundation, and complied with the Declaration of Helsinki. All patients provided informed consent before enrollment. For this study, living KT donation refers to donation from the genetic relatives of parents. Potential participants were excluded for retained dialysis access, an unsteady gait, acute infection, or acute transplant rejection in the most recent 3 months and atrial fibrillation, decom-pensated heart failure, malignancy, or refusal to sign the consent form for the study. Seventy KT patients were enrolled in this study. Basic characteristics, medical history, and medication details were collected from medical records. Diabetes mellitus and hypertension were defined by past history or current use of antidiabetic or antihypertensive medication. Coronary artery disease was defined as >50% stenosis in any segment as reported in coronary angiography records.

Measurement of blood pressure and endothelial function
Blood pressure was measured by standard mercury sphygmomanometers. The endothelial function and VRI were measured with the digital thermal monitoring test. The digital thermal monitoring test detects reactive hyperemia of digits after temporary ischemia and was performed on patients after a 10-hour overnight fast. Blood pressure cuffs were placed on both arms, and skin temperature sensors were placed on both index fingers. The temperature was collected after a 3-minute stabilization and a 2-minute inflation of the cuff to 50 mm Hg higher than the systolic blood pressure followed by a 5-minute deflation. We used VENDYS software to calculate VRI by the maximum difference between the observed temperature rebound curve and the zero-reactivity curve. Vascular reactivity was classified as poor (VRI < 1.0), intermediate (1.0 > VRI < 2.0), or good (VRI ≥ 2.0).5,6

Measurement of body composition
Body weight was measured in the patients while wearing light indoor clothing, and body height was measured with the patients standing barefoot or in stockings. Body mass index was calculated as body weight in kilograms divided by height in meters squared.6 Waist circumference was assessed with a tape measure around the waist from the point between the lowest ribs and the hip bones with the hands on the hips.12

Statistical analyses
Data were tested for normal distribution with the Kolmogorov-Smirnov test and are expressed as means ± SD for normally distributed data and as medians and interquartile ranges for nonnormally distributed data. Significant differences in measured values between the 3 VRI groups (poor, intermediate, and good) were analyzed with the Kruskal-Wallis analysis for parameters with nonnormal distribution (fasting glucose, triglycerides, blood urea nitrogen, creatinine, and intact parathyroid hormone) or 1-way analysis of variance for normally distributed data. Categorical data were analyzed with the chi-square test and are presented as a number and percentage. Because fasting glucose, triglycerides, blood urea nitrogen, creatinine, and intact parathyroid hormone levels were not normally distributed, the data were log-transformed to achieve normality. Clinical variables that correlated with VRI values were evaluated by simple linear regression analyses, and significant variables were included in a multivariable forward stepwise regression analysis. P < .05 was considered statistically significant. Statistical analyses were performed with SPSS software (version 19.0).

Seventy KT recipients were enrolled in the study. The mean age of the patients was 46.31 ± 10.88 years, and the mean time from transplant was 79.70 ± 52.51 months. Among the enrolled patients, 25 patients (35.7%) and 10 patients (14.2%) had intermediate and poor VRI, respectively. The clinical and laboratory characteristics of the 70 KT recipients are shown in Table 1. Greater waist circumference (P = .037), higher serum ALP level (P = .026), and lower serum adiponectin level (P = .001) were associated with poor VRI. There were no significant differences in sex, transplant type, presence of comorbidity, or type of immunosuppressive agents among the 3 VRI groups.

Cardiovascular disease has been the leading cause of death of patients with chronic kidney disease (CKD). Many studies have reported numerous mechanisms of CVD in CKD.1 The endothelium, which is a single layer of epithelial cells in vessels, has been shown to be a potential target for CVD in CKD.13 Disturbance in mineral metabolism, uremic toxins, oxidative stress, and inflammation are significant CKD factors that affect endothelium health.13 Older age or hypertriglyceridemia is an independent risk factor for endothelial dysfunction.14,15 Waist circumference is another CVD risk marker that is independent of other cardiovascular risk factors and is associated with endothelial dysfunction.16,17 Circulating ALP is an independent predictor of all-cause mortality in the general population and in patients with CKD.18 Serum ALP is highly expressed in cardiac and brain endothelial cells and may possibly participate in the anti-inflammatory function of endothelial barriers.18 Serum ALP level is inversely related to endothelium-dependent vasodilation in hypertensive patients.19 In our study, waist circum-ference and ALP levels were significantly and negatively associated with VRI values in KT patients.

Adiponectin circulates as 3 types of oligomers: those that are low molecular weight (trimers), middle molecular weight (hexamers), and high molecular weight.20 High-molecular-weight adiponectin is the most potent form for modulation of carbohydrate metabolism, inflammatory response, and vascular homeostasis.21 In the vascular wall, adiponectin has anti-inflammatory and anti-atherosclerotic effects that suppress the endothelial inflammatory response, macrophage-to-foam cell transformation, and vascular smooth muscle proliferation; reduce oxidative stress; and increase nitric oxide production.20 Endothelial dysfunction is caused by decreased nitric oxide production and/or increased nitric oxide inactivation due to an excess of reactive oxygen species and is an important precursor to the development and progression of atherosclerosis.22 In previous clinical studies, regardless of whether the participants had hypertension or diabetes or neither of these, a reduction in adiponectin has been associated with impaired vasodilation.23-26

In KT patients, ischemia-reperfusion injury is an important mechanism associated with acute rejection or chronic graft dysfunction and may lead to swelling of the endothelial cells, loss of the glycocalyx with degradation of the cytoskeleton, increased vascular permeability, and fluid loss to the interstitial space that can induce endothelial dysfunction.27 Other immuno-suppressive agents, such as glucocorticoids or calcineurin inhibitors, have an adverse effect on endothelial function in KT.11 Hypoadiponectinemia is associated with coronary artery disease, hypertension, left ventricular hypertrophy, and a greater risk of myocardial infarction.8 Our results showed that serum adiponectin level was positively associated with VRI values and hypoadiponectinemia was associated with poor VRI in KT patients.

There were limitations of our study. First, this study had a small sample size and single-center cross-sectional design, which may have led to selection bias and affected the statistical power. Second, adiponectin is known to protect patients from insulin resistance and metabolic syndrome in many mechanisms, and it has been shown to promote insulin secretion, reduce hepatic gluconeogenesis, and facilitate the trans­portation of glucose to muscle.8-10 However, we collected fasting glucose and waist circumference but not fasting insulin level. There were insufficient data to estimate the effect of adiponectin on metabolic processes such as insulin resistance on KT patients. Third, a few patient characteristics, such as alcohol consumption, cigarette smoking, or exercise habit, were not collected. Moreover, some immunosup­pressive drugs can affect endothelial function in KT patients.11 However, there were no significant differences in the use of immunosup-pressive drugs among patients in the 3 VRI categories in the present study. Further studies are warranted to establish definitive conclusions for the causal relationship between serum adiponectin level and endothelial dysfunction in KT patients.

From the 1Division of Nephrology, 2Department of Surgery, Hualien Tzu Chi Hospital, Buddhist Tzu Chi Medical Foundation, and the 3School of Medicine, Tzu Chi University, Hualien, Taiwan
Acknowledgements: This study was supported by a grant from Buddhist Tzu Chi General Hospital, Hualien, Taiwan (TCRD109-54). Otherwise, the authors have not received any funding or grants in support of the presented research or for the preparation of this work and have no declarations of potential conflicts of interest.
*Ming-Che Lee and Bang-Gee Hsu contributed equally to this work.
Corresponding author: Bang-Gee Hsu, Division of Nephrology, Buddhist Tzu Chi General Hospital, No. 707, Section 3, Chung Yang Road, 97004 Hualien, Taiwan
Phone: +886 3 856 1825
E-mail: gee.lily@msa.hinet.net 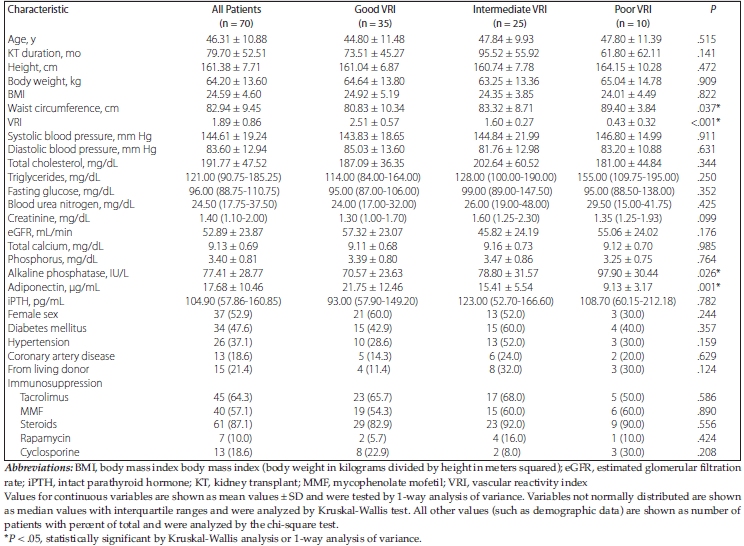 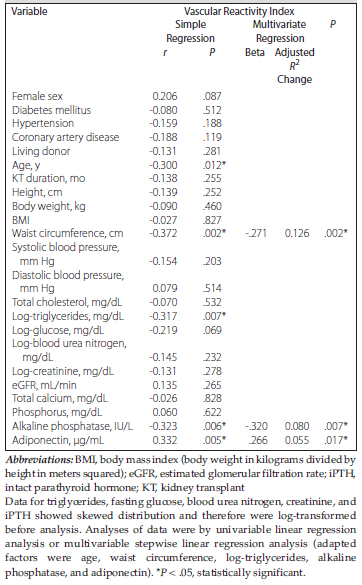