Ogilvie syndrome (acute colonic pseudo-obstruction) is a rare, acquired, life-threatening disorder for which treatment plans vary from simple observation to surgical intervention. Ogilvie syndrome has been reported in patients after renal or liver transplant, but
its occurrence after simultaneous pancreas-kidney transplant is rare. Herein, we present the case of a
45-year-old female recipient of a deceased donor simultaneous pancreas-kidney transplant who deve-loped Ogilvie syndrome 10 days after a previous fecal ileus that had resolved at posttransplant week 3. She demonstrated Ogilvie syndrome with obstructive colitis features (severe abdominal pain and high-grade fever), which we immediately treated with colonic decom-pensation by placement of a transanal ileus tube. After several screening examinations and discontinuation of unnecessary medicines, we were not able to confirm the cause of Ogilvie syndrome in our patient. After 2 weeks, the patient remained unresponsive to the conservative treatment, and so hand-assisted laparoscopic subtotal colectomy was performed to remove the dilated colon. Her symptoms gradually resolved after surgery. Histologically, we confirmed submucosal fibrotic changes, especially at the distal end of the resected colon, without evidence of amyloidosis, and the number of Auerbach plexus ganglia had decreased. Nevertheless, we observed no degenerated appearance of ganglion cells in the Auerbach plexus or the Meissner plexus. After exclusion of several collagen diseases, including systemic sclerosis, we determined that idiopathic colonic fibrosis was the likely cause of Ogilvie syndrome in our patient. When surgery is indicated in transplant patients with Ogilvie syndrome with obstructive colitis features, colectomy should be considered.

The patient remained well and free from significant complications such as thrombosis, pancreatic fistula, rejection, infection, or ileus until postoperative week 3, when she developed colonic ileus. Computed tomography scan revealed ~90-mm dilatation of the cecum to descending colon (Figure 1a and Figure 1b). A contrast enema was administered, which immediately depressurized the dilated colon by voiding feces but did not reveal any type of mechanical obstruction. The condition resolved, and the patient was discharged. However, 10 days later, she returned to the hospital with abdominal distention, pain, and high-grade fever. Her laboratory examination results showed slightly elevated blood glucose and deteriorated renal function associated with high-grade inflammatory signs as follows: fasting blood glucose 153 mg/dL, hemoglobin A1c 5.7%, amylase 82 IU/L, creatinine 1.82 mg/dL, blood urea nitrogen 25.8 mg/dL, white blood cell count 6100 cells/?L, and C-reactive protein 6.34 mg/dL. Imaging studies demonstrated a severe cecum-to-splenic fixture colonic dilatation (Figure 1c). Transanal ileus tube placement successfully decom-pressed the colon and relieved her symptoms, except for the high-grade fever. The results of blood and stool cultures were negative for causative pathogens. Flexible fiberoptic colonoscopy was then performed but failed to detect the cause, and test results were negative for the presence of cytomegalovirus, pseudomembranous colitis, and posttransplant lymphoproliferative disorder. Total body screening tests did not reveal any other febrile conditions. Therefore, we determined these findings were consistent with Ogilvie syndrome associated with obstructive colitis features.

Given her comorbidities, we treated her conservatively without neostigmine. Despite her initial recovery, her condition deteriorated with conservative treatments. Two weeks after the onset of Ogilvie syndrome, with careful consideration of her immunocompromised status and deteriorated nutritional condition, we decided to perform a surgical subtotal colectomy (cecum to a part of sigmoid colon) with creation of an ileostomy. We commenced with a hand-assisted laparoscopic approach with a 7-cm median incision. Five 5-mm trocars were placed along the scar of the previous 2 drain holes, the ileostomy site, and the right and the left upper quadrant areas. Inspection revealed no inflammatory condition of the pancreas graft and no intra-abdominal compression or interference from the renal graft. After mobilization of the cecum to sigmoid colon, the ileum end and sigmoid colon were divided by placement of gastrointestinal staples, and an ileum/sigmoid colon functional end-to-end anastomosis was established. Subsequently, an ileostomy was created at right lower abdomen through the rectus abdominis.

Histologically, mucosal ischemic changes were observed mainly in the ascending colon, and we confirmed submucosal fibrosis that was negative after Congo Red stain, especially at the distal side of the colon (Figure 2a and Figure 2b). Our observation of mucosal ischemic changes in the ascending colon were consistent with nonfunctional colon and obstruc-tive colitis. Regarding neurons, both the Auerbach plexus and the Meissner plexus remained intact without a degenerated appearance (Figure 2c), although the number of ganglia in the Auerbach plexus decreased to 74 to 168 ganglia per circum­ference. The patient may have concomitantly demons-trated features consistent with systemic sclerosis or other collagen diseases, and we considered these as potential causes for the submucosal fibrosis and the reduced number of Auerbach plexus ganglia. Conversely, physical examination did not reveal evidence of Raynaud phenomenon, sclerodactyly, or dysphagia. Tests for antinuclear antibodies and other major autoantibodies (anti-Scl-70, centromere, ribonuc-leoprotein, and RNA polymerase III) were negative. Consequently, the condition was diagnosed as idiopathic colonic fibrosis that resulted in Ogilvie syndrome.

The postoperative course was initially complicated with high-grade fever without other associated symptoms. Over the next 2 weeks, her symptoms gradually resolved with well-controlled pancreas function and renal function (glucose 96 mg/dL, hemoglobin A1c 5.5%, creatinine 1.22 mg/dL, and blood urea nitrogen 22.3 mg/dL).

Acute colonic pseudo-obstruction (Ogilvie syndrome) is a remarkable complication precipitated by several types of surgery or other medical conditions. Careful attention is needed when Ogilvie syndrome occurs in immunocompromised patients, since significant mortality has been reported.1 Our patient was followed through a clinical course of refractory Ogilvie syndrome without resolution by conservative treatment methods. It is debatable whether Ogilvie syndrome was the cause of the previous ileus that developed 3 weeks after SPK transplant. However, the initial manifestation, 10 days previous to diagnosis of Ogilvie syndrome, was consistent with obstructive ileus because the condition resolved after the clearance of fecal impaction in the sigmoid colon. Ten days after this initial episode resolved, a subsequent episode of ileus developed that was diagnosed as Ogilvie syndrome. Interestingly, although a wide variety of causes had been reported by others, there is scarce evidence that obstructive ileus precipitates colonic pseudo-obstruction. Our case may show that mechanical obstruction is a precipitating factor of Ogilvie syndrome. Thus, we assert that regular postoperative bowel movements are an essential factor to facilitate good health in transplant recipients.

Although the pathogenesis of Ogilvie syndrome is not completely understood, neurological dysregu-lation of peristalsis appears to play an important role in the onset of Ogilvie syndrome.3 Several precipitating factors may affect this process and evoke a definitive manifestation of Ogilvie syndrome. In this regard, it is plausible that diabetic neuropathy4 and end-stage renal disease5 potentially worsen gastroin­testinal motility, for which laxatives may be required to control bowel movements.6,7 Therefore, it is reasonable to conclude that Ogilvie syndrome in this population tends toward deterioration and therefore warrants diligent attention. Furthermore, in this case, submucosal fibrosis of colon and decreased number of Auerbach plexus ganglia were confirmed pathologically. It has been established that multiple autoimmune disorders may exist concurrently,8 and diagnosis of systemic sclerosis compatible with the pathological features that we observed in our case has been shown.9 Nevertheless, we were able to exclude the onset of other autoimmune disorders on the basis of the results of physical and laboratory examinations. Although there was no clear reason for these pathological changes, it is reasonable that idiopathic colonic fibrosis (shown with submucosal fibrosis of colon and decreased Auerbach plexus) contributed to the onset of Ogilvie syndrome.

It is true that most symptoms of Ogilvie syndrome without obstructive colitis can be managed by conservative treatments. However, it is also true that obstructive colitis may disrupt standard treatment plans as the patient’s condition would deteriorate severely. Our case clearly suggested the importance of surgical colectomy to include the ischemic part of the colon to treat the combination of Ogilvie syndrome with obstructive colitis features. Thus, our proposed strategy of surgical intervention for this patient is straightforward: total resection of the dilated colon with ileostomy. However, several other treatments have been reported.10 Especially for elective surgeries, a laparoscopic approach for colectomy is a favored technique. In our case, hand-assisted laparoscopic surgery was selected to facilitate access and manipulation of dilated colon and the expected adhesion of a previous SPK transplant. This laparoscopic approach may be feasible even for patients with increased intra-abdominal volume and postsurgical adhesions because the technique allows for the surgeon’s hand to manually reduce the size of the dilated colon through the ileus tube as well as facilitate subsequent colon mobilization.

This case indicates the importance of surgical colectomy for Ogilvie syndrome with obstructive colitis features for immunocompromised patients. Hand-assisted laparoscopic surgery is an ideal approach for this medical condition. 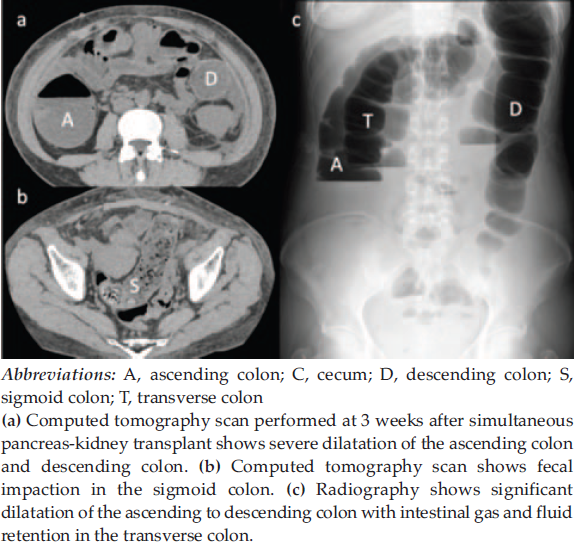 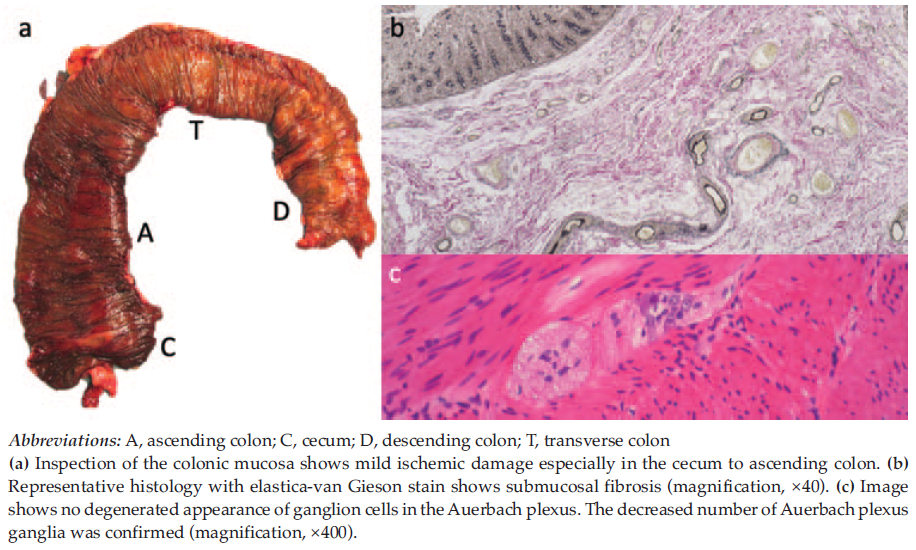 Figure 2. Inspection and Histological Investigation of the Resected Colon