We report a rare variant of the hepatic arterial supply observed during liver procurement from a 71-year-old female donor for whom an ischemic stroke caused brain death. Preoperative computed tomography showed a partially obliterated celiac trunk and an atypical arterial branch that coursed in a retropancreatic plane away from its origin at the superior mesenteric artery to anastomose with the common hepatic artery at the origin of the proper hepatic artery. The gastroduodenal artery and the dorsal pancreatic artery are the 2 conventional anastomotic arcades between the celiac trunk and the superior mesenteric artery. However, another potential anastomotic route is a rare physiological phenomenon known as the arc of Bühler, which, if present, connects the superior mesenteric artery with the celiac trunk or one of its branches. Although the arc of Bühler is known to occur in less than 3% of the general population, it could serve as a crucial anastomotic option in the case of median arcuate ligament syndrome or atheromatous obliteration of the celiac trunk. In our case, we were able to dissect and preserve the entire anastomotic arc from the donor. For arterial reconstruction during liver transplant, we anastomosed the arc of Bühler to the recipient’s hepatic artery at the origin of the gastroduodenal artery. The postoperative course was uneventful, and the recipient was in good health at the 6-month follow-up. The arc of Bühler, when present, is an important anastomotic option in hepatobiliary surgery to avoid potential damage to the arterial supply of the liver.

The exact knowledge of vascular anatomy for liver supply is fundamental in hepatobiliary and pancreatic surgery, especially for liver transplant. Preoperative study of vascular imaging before liver procurement is crucial to develop a proper surgical strategy to ensure successful liver vascularization during dissection.

Normal liver supply derives from the proper hepatic artery, which is a branch of the common hepatic artery (CHA) with the gastroduodenal artery (GDA). The 2 conventional anastomotic routes between the celiac trunk (CT) and superior mesenteric artery (SMA) are the GDA and the dorsal pancreatic artery. The GDA anastomoses with branches of SMA behind the head of the pancreas through its anterior and posterior pancreaticoduodenal arcades. The second conventional option is the dorsal pancreatic artery, which usually originates from the splenic artery and anastomoses directly with the SMA or one of its branches, as the middle colic artery. These connections between CT and SMA are vital when an obstruction of CT is present, as in a case of median arcuate ligament syndrome or atheromatous obliteration.1

An alternative, unconventional anastomotic route is available if the patient’s anatomy includes the arc of Bühler (also known as the Bühler trunk). First described by Bühler in 1904,2 the arc of Bühler has an incidence of less than 3% in the general population; when present, this feature can be hemodynamically relevant in the presence of CT obstruction.3 Michalinos and colleagues have reported results from a series of 53 patients in whom the arc of Bühler usually joined the SMA with the CT or, more rarely, the SMA with the splenic artery or the CHA. One case was described as an anastomotic arc between a jejunal branch of SMA and the proper hepatic artery.4

Formal consent was not required for the use of the anonymized images in this report.

The donor was a 71-year-old female patient for whom an ischemic stroke resulted in brain death. Preoperative computed tomography showed an atypical anastomotic arcade for liver supply. Notably, the diameter of this anastomotic arc was similar to the diameter of the main splanchnic branches, which suggested hemodynamic relevance of the arcade. Indeed, preoperative images showed a partially obstructed CT (Figure 1A) due to an atheromatous obliteration. Anteriorly, the CHA arose from the CT and coursed to the hepatoduodenal ligament. Posteriorly, an atypical branch coursed in a retro-pancreatic plane and anastomosed with the CHA at the origin of the proper hepatic artery (Figure 1C).

Therefore, to provide optimal vascularization of the liver graft, we performed a complete dissection of the arc of Bühler and preserved the entire anastomotic arcade (Figure 2). We performed simultaneous arterial and portal cold perfusion with a total of 8 L of Celsior cold storage solution (IGL) (6 L arterial, 2 L portal).

To achieve a properly oriented arterial anastomosis with an optimal intima-to-intima opposition (no atheromatous plaques in the field of the anastomosis), we performed an end-to-end anastomosis between the arc of Bühler and the recipient’s hepatic artery at the origin of GDA. The postoperative course was uneventful, and the recipient was in good health at the 6-month follow-up.

The arc of Bühler is a rare anastomotic route between CT and SMA. The embryological origin of the arc of Bühler is explained by the Mac Kay arch theory5 and the Tandler longitudinal anastomosis.6 The Mac Kay theory postulates that these arterial structures are embryologically derived, respectively, from the 10th to the 13th ventral segmental arteries of the aorta. Specifically, the left gastric artery arises from the 10th ventral segmental artery, the splenic artery from the 11th, the CHA from the 12th, and the SMA from the 13th ventral segmental artery. The fusion of the first 3 branches gives rise to the CT, whereas the SMA migrates caudally at a later developmental stage. The Tandler theory suggests the presence of a longitudinal anastomosis between these branches that typically regresses during embryological development. The persistence of these longitudinal anastomoses explains the presence of aberrant intermesenteric anastomoses between splanchnic branches.

The rarity of the arc of Bühler could result in an underestimation of its clinical and surgical impli-cations. The knowledge of this variant will contribute to the prevention of surgical or radiological errors that could result in complications such as unexpected bleeding or ischemic visceral lesions.

In this present case, preoperative images showed the anastomotic arcade in a retropancreatic plane below the portal vein. The substantial diameter of the arc of Bühler supports the hypothesis that it may act as the main trunk for liver supply, during an obstructive event in the CT. Indeed, the preoperative computed tomography images revealed a constriction at the CT origin that was probably caused by an atheromatous plaque.

The arc of Bühler is a rare anastomotic arcade between the CT and the SMA. Although it is not usually hemodynamically relevant, it could be of primary significance in case of CT or SMA obstruction by facilitating optimal vascularization of the liver or the splanchnic organs.

Knowledge of this anatomic variant is essential in hepatobiliary and liver transplant surgery to avoid potential errors that may result in bleeding or ischemic lesions. Rigorous review of image data before multiorgan procurement will reduce unexpected findings and improve arterial and graft outcomes.

From the 1Department of General Surgery and Transplantation, Azienda Socio Sanitaria Territoriale Grande Ospedale Metropolitano Niguarda, Milan, Italy; and the 2Department of Medicine and Surgery, University of Milano-Bicocca, Milan, Italy
Acknowledgements: The authors have not received any funding or grants in support of the presented research or for the preparation of this work and have no declarations of potential conflicts of interest.
Corresponding author: Niccolò Incarbone, ASST Grande Ospedale Metropolitano Niguarda, Piazza dell’Ospedale Maggiore 3, 20162 Milan, Italy
Phone: +39 02 64444617
E-mail: niccolo.incarbone@gmail.com 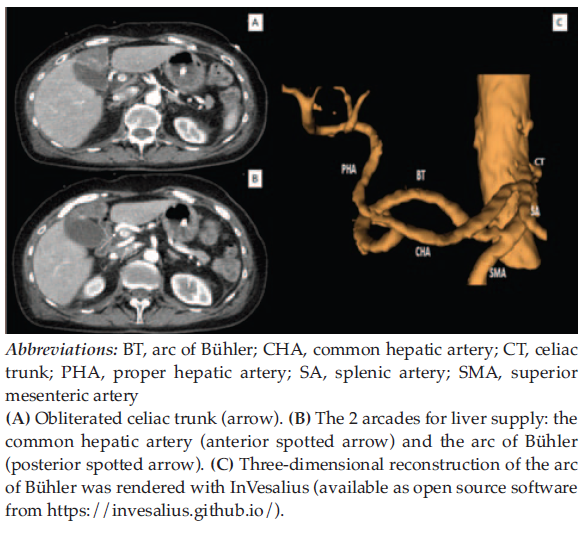 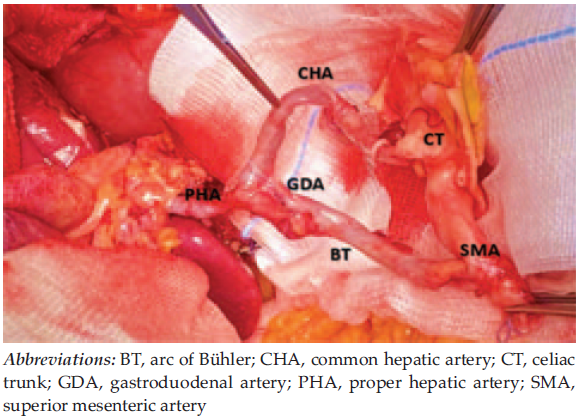 Figure 2. Dissection of Arc of Bühler Before Liver Transplant