Objectives: Assessment of the transcaval venous pressure gradient, the central venous to inferior vena caval pressure, assists anesthetists and surgeons in management of liver transplant recipients. Traditionally, this entails insertion of a femoral central line with increased patient risk and health care cost. Here, we assessed the ability of a saphenous vein cannula to act as a surrogate for the femoral central line as a means to assess the transcaval pressure gradient in a safer and less invasive manner.
Materials and Methods: A prospective cohort of 22 patients undergoing liver transplant underwent saphenous vein cannulation in addition to insertion of a femoral and internal jugular central venous catheter. Data were collected throughout each phase of surgery to assess the central, femoral, and saphenous vein pressures; results of a range of relevant physiological and ventilatory data were also collected.
Results: The primary outcome, the correlation between saphenous and femoral venous pressure throughout surgery, was acceptable (r2 = 0.491, P < .001). During the anhepatic phase of surgery, this correlation improved (r2 = 0.912, P < .001). The correlation between the femoral to central venous pressure and saphenous to central venous pressure gradients was also reasonable throughout surgery (r2 = 0.386, P < .001), and this correlation was significantly stronger during the anhepatic phase (r2 = 0.935, P < .001).
Conclusions: Saphenous venous pressure, provided by peripheral cannulation, provided a reliable, less invasive, and safer alternative to femoral central line insertion for determination of the transcaval pressure gradient during the anhepatic phase of liver transplant.

During liver transplant, the inferior vena cava (IVC) is either fully cross-clamped or partially clamped, in the piggyback technique, to allow excision of the native liver and graft implantation. The placement of this clamp leads to an interruption to IVC blood flow, the extent of which depends on surgical technique and clamp positioning,1 and consequently an increase in IVC pressure. This venous pooling diminishes cardiac output, necessitating increased vasopressor support to maintain perfusion pressure and end-organ oxygen delivery. The extent of this obstruction to IVC flow can be derived by measurement of the pressure gradient between the IVC and central venous pressure (CVP), defined here as the transcaval pressure gradient (TCPG).2,3 During liver transplant, the TCPG provides useful real-time information on the venous pressure gradient and venous congestion caused by the caval clamp and also that caused by the caval anastomosis.2,3 This information permits adjustment of the side-biting vascular clamp to decompress the IVC if a piggyback technique has been employed, helps guide fluid management, and also identifies flow obstruction at the IVC anastomoses, which may cause graft dysfunction. We have recently shown that the TCPG during the anhepatic phase of transplant is independently associated with risk of postoperative acute kidney injury,1 highlighting the clinical importance of this measurement and the value of IVC decompression. However, calculating the TCPG necessitates the insertion of a femoral central line for the purpose of IVC pressure assessment. The insertion of a second central venous catheter (CVC) increases patient risks, including inadvertent femoral artery cannulation or trauma, which can result in pseudo-aneurysm formation, retroperitoneal hematoma, trauma to the femoral nerve, and risk of catheter-associated infection. Among liver transplant recipients, retroperitoneal hemorrhage carries significant consequences due to coagulopathy and may occur in up to 1.3% of cases.4-6

Ethics
Ethical approval was obtained from the Cornwall and Plymouth Research Ethics Committee (reference number 17/SW/0294), and the study was sponsored by the Royal Free NHS Foundation Trust.

Conduct of anesthesia
General anesthesia was induced and maintained as per clinician preference. In addition to routine anesthetic monitoring, invasive blood pressure, urine output, and temperature were measured. Temperature control was achieved with an under-patient warming mattress, forced air warmer, and warmed intravenous fluids. Central venous cannulation of the right internal jugular with a quad-lumen CVC (with 12- to 18-gauge channels) and an 18-gauge single-lumen CVC to either femoral vein was performed with the use of ultrasound guidance to confirm intravascular placement and to limit complications. Peripheral cannulation with an 18-gauge cannula was performed in the appropriate vein below the knee to match the side of insertion of the femoral CVC. Typically, this entailed cannulation of a large visible vein above or below the ankle. The saphenous cannula and femoral CVC were used only for pressure analyses. All 3 venous pressures were transduced continuously to ensure appropriate waveforms.

Thromboembolic deterrent stockings (TEDS) were applied as normally performed to both legs, with care to create the smallest disruption possible to the TEDS on the cannulated leg to remove external sources of pressure at the saphenous cannula insertion site. Sequential pneumatic compression devices were applied; venous pressure data were sampled at least 1 minute after the compression cycle was completed (on either leg). Saphenous vein cannulae were removed at the end of the procedure unless there was an ongoing need for additional venous access.

Power calculation
This is the first study of its kind to examine venous pressures in these 2 vascular territories. However, comparable work on comparisons on other vascular territories (ie, upper limb vs CVP) in similar circumstances have generated a range of correlation coefficients, with the largest study demonstrating a correlation coefficient of 0.89.12 A power analysis was performed to calculate the required sample size based on the 2-tailed Pearson product-moment coefficient. Because this is computationally identical to the Spearman rank correlation coefficient, this method was unaffected by the underling distribution. To generate a 90% power and 5% significance level with a presumed population correlation of 0.6, a sample size of 20 was required.

Statistical analyses
The distribution of data was assessed using the Kolmogorov-Smirnov test of normality with Lilliefors significance correction. When data were combined throughout surgery, all variables, including the venous gradients, were non-Gaussian other than the peak airway pressure and tidal volume (P = .200 for both cases). Within each surgical phase, the distribution of venous pressures and gradients were normal other than end-of-case femoral pressure. This was expected as there is a shift in the venous pressures between each phase.

Associations between physiological and ventilator variables and venous pressures were determined using Spearman rank correlation coefficients for the pan-surgical data and Pearson correlation for within each surgical phase. To determine the independent effect of each variable on the saphenous venous pressure correlation, multivariable linear regression with backward elimination and main effects modeling were performed. Covariates included the femoral venous pressure, CVP, temperature, ventilator variables, and surgical technique. Model stringency used a probability of F threshold of 0.1 for variable removal. All statistical analyses were performed using SPSS version 20 software.

Inclusion and exclusion criteria
Patients over the age of 18 years undergoing any form of primary and sole liver transplant at the Royal Free Hospital were eligible for this study.

Those patients in whom internal jugular or femoral CVC placement was not possible or who had significant complications from insertion were excluded. Additional exclusion criteria included the presence of concerns regarding vascular anatomy either preoperatively (ie, known significant varicose veins, previous deep venous thrombosis in any limb, skin infection, or prior radiotherapy of the cannula insertion site) or because of challenging cannulation with hematoma or multiple vessel perforation. Patients with known significant valvular disease or left ventricular failure (left ventricular ejection fraction <40%) were also excluded.

Study population
Thirty patients were consented for this study over a period of 8 months; of these, 26 underwent liver transplant, and data collection was performed for 22 patients. No patients were excluded. All organ donations were from deceased donors.

Multivariate analysis showed that the only independent association with saphenous venous pressure was femoral venous pressure (semi-partial correlation coefficient of 0.875, P < .001), with all other physiological variables eliminated.

Secondary outcomes
The saphenous and femoral venous pressures during the anhepatic phase were highly correlated (Pearson r2 = 0.912; P < .001). Correlation was also good during all other surgical phases with the exception of the reperfusion phase (Table 2). A comparable analysis of the reperfusion phase using only
cases that had cross-clamp or piggyback surgical approaches also did not demonstrate any correlation.

Table 3 shows the associations between the femoral-to-CVP and saphenous-to-CVP gradients throughout surgery. Correlation for the entire surgical episode was moderate (Spearman r2 = 0.386, P < .001; Figure 2). Correlations were excellent for the anhepatic, reperfusion, and closure phases but poor for the presurgical and dissection periods. The TCPG was significantly higher in the caval replacement surgical approach, compared with the piggyback approach, by 10 mm Hg (femoral-to-CVP) and 7.4 mm Hg (saphenous-to-CVP) in the anhepatic phase, as expected (Table 4).

Main findings
We demonstrated a tight correlation between the femoral and saphenous venous pressures during the anhepatic phase of liver transplant. This association was maintained within each surgical phase with the exception of the reperfusion phase. This association persisted when the CVP was taken into account, demonstrating that the saphenous-to-CVP gradient provides a reliable surrogate for the femoral-to-CVP gradient when assessing the TCPG. Furthermore, we demonstrated that the association between the saphenous and femoral venous pressures was maintained despite the presence of physiological and ventilatory variables.

We observed good femoral-to-CVP and saphenous-to-CVP correlations except for those shown in the presurgical and dissection phases (P = .110 and .087, respectively). This may be as a result of variability in the extrinsic compression of the vena cava caused by the presence of ascites. The transplant recipients were a heterogenous group of patients with a variety of liver disease etiologies; many had significant portal hypertension and variable degrees of ascites. Ascites can cause extrinsic compression of the IVC at the start of surgery, prior to breaching of the peritoneum, which will affect the correlation. When ascites are drained during the dissection phase, this extrinsic compression, and hence variable obstruction to venous return, is removed.

Limitations of this study
The extrinsic compression derived from the TEDS and sequential pneumatic compression devices may have affected the saphenous pressures. It was noted that, when TEDS were particularly tight, the gradient from the saphenous to the femoral venous pressure was greater, although still consistent throughout the case. We did not collect data to reflect the intravascular status of the patients, which, as described above, may have contributed to the variability in venous pressures.

Operations involving manipulation or cross-clamping of the IVC can result in significant hemodynamic instability; hence, knowledge of the degree of interruption to IVC flow is useful for patient management during these surgeries. For measurement of IVC pressure, a CVC inserted into the femoral vein is the gold standard; however, the practice of inserting femoral lines into coagulopathic patients involves risks that have significant implications should complications occur. Knowledge of the infrahepatic IVC pressure and hence the transcaval gradient, IVC to CVP, can assist in anesthetic management of liver transplant recipients. It can allow anesthetists insight into the cause of hypotension, giving the opportunity to differentiate between hypovolemia and surgical manipulation restricting venous return.

Knowledge of the transcaval gradient during the anhepatic phase can give anesthetists the opportunity to inform surgeons of the hemodynamic consequences of the IVC side-biting vascular clamp placement in the piggyback technique. This should result in the repositioning of the clamp, where it is surgically possible to do so, with potential hemodynamic benefits that are likely to impact on renal outcomes.1 There are some specific patient groups where maintenance of unobstructed venous return throughout the transplant is of critical importance. Patients with significant diastolic dysfunction (frequently seen in cirrhotic cardiomyopathy) or obstructive pathologies, like hypertrophic obstructive cardiomyopathy or inducible systolic anterior motion of the mitral valve, are very sensitive to alterations in preload. Knowledge of the IVC pressure in this cohort is useful so that care can be taken with both surgical technique and fluid management to optimize venous return.

We have demonstrated that transduction of the saphenous venous pressure from a peripheral cannula provided a reliable alternative to femoral central line insertion for determination of the transcaval venous gradient. This can allow clinicians to measure obstruction to venous return, which is especially relevant and modifiable in the anhepatic phase, in a less invasive and safer method than femoral venous cannulation. 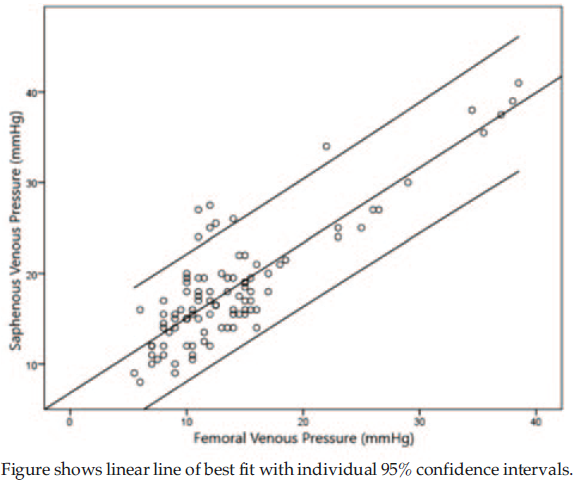 Table 1. Correlation Between Intraoperative Variables and Venous Pressures Throughout Surgery 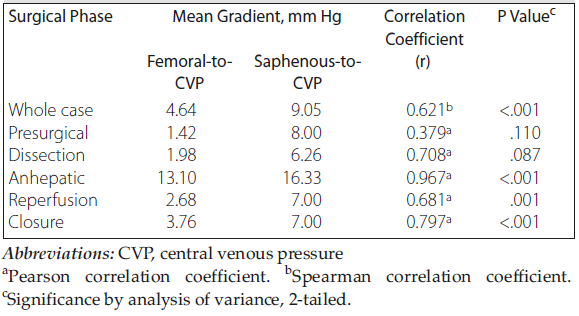 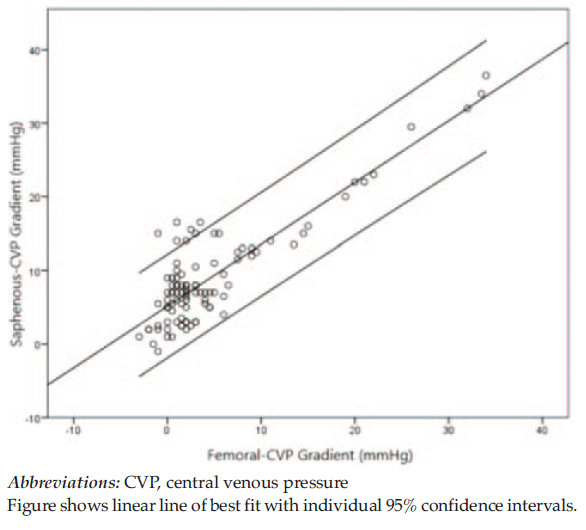 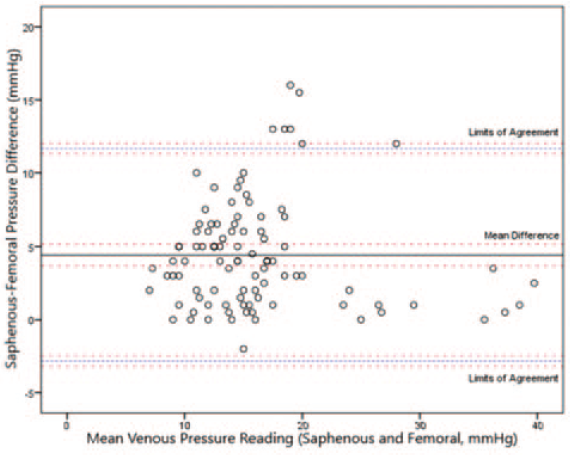