Double extrahepatic biliary duct (DEBD) is an extremely rare anomaly.1 When it occurs, it is commonly accompanied by pancreaticobiliary system malformations. In some cases, an accessory biliary duct can be seen that drains into the duodenum or the second portion of the pancreatic duct.2 Cholelithiasis, cholangitis, and upper gastrointestinal system malignancies often develop in these cases.1 So far, most reported DEBD cases have been diagnosed during evaluations for biliary system malignancies or jaundice. Here, we present a unique DEBD case diagnosed together with 3-dimensional (3D) magnetic resonance cholangiopancreatography (MRCP), post­processing volume rendering, and maximum intensity projection findings in which we detected aberrant drainage of the posterior segment of the right lobe into the pancreatic duct together with a pancreatic duct anomaly.

A 39-year-old man presented to the gastroenterology outpatient clinic with postprandial abdominal pain and distension. Physical examination and upper gastrointestinal system endoscopy results were normal. In laboratory analyses, hepatic function and bilirubin levels were within normal range. On sonography, the gallbladder was slightly hydropic and there was wall thickening compatible with adenomyomatosis, cholesterol crystals adhered to the wall, and occasional millimetric solid nodules with echogenicity equivalent with that of the gallbladder wall. We performed MRCP imaging in search of a pancreaticobiliary junction abnormality or obstruction that would explain the adenom­yomatosis.

For the pancreaticobiliary system anomaly, 2 extrahepatic biliary ducts were detected (Figure 1). The first duct was formed by confluence of the left hepatic duct and right anterior hepatic branch, which coursed laterally and drained to the minor papillae after joining the thin ventral duct. This duct is considered to be the common biliary duct (CBD) because it drains most of the liver. The cystic duct joined the CBD at the mid-third segment. The second duct originated from the right posterior hepatic duct, crossed over the CBD, and projected medially. It drained to the major papillae through a long junction after joining the dorsal duct. There was a single ductal connection at an extrahepatic portion at the proximal end before the origin of the cystic duct.

In the literature, double extrahepatic biliary system anomalies have been denoted by various terms, such as double, duplicated, accessory, aberrant, or incomplete.1-8 There is no established system to differentiate these various terms, which has resulted in confusion that may be resolved by a common terminology. Most reported cases in the literature have been diagnosed by cholangiography, and a few of these were by the MRCP method.1,2 Furthermore, Basaran and colleagues emphasized the importance of MRCP regarding the delineation of the biliary anatomy before liver transplant.9 The MRCP is a noninvasive technique that provides highly detailed anatomic information. Compared with MRCP, cholangiography is inadequate for assessment of these anomalies, and the differences in these techniques has led to variation in terminology. Advances in imaging technology have improvedMR imaging so that excellent data are available from 3D thin-section images via postprocessing at workstations.10 These technological advances allow better assessment by MRPC of intrahepatic and extrahepatic biliary system anatomy, distal drainage, and the pancreaticobiliary junction.10 When an extrahepatic anomaly is detected by MRCP, the intrahepatic connection and distal-end drainage enable detailed assessment similar to our case. From these detailed data, we propose the following terminology for description of the second extrahepatic biliary duct anomaly.

The main mechanism for the development of DEBD may be an abnormality in the recanalization of the hepatic primordium during early embryogenesis.11 The DEBD was first classified by Goor and Ebert12 according to the anatomic appearance of the anomaly. Saito and colleagues classified the extrahepatic ducts into 4 types according the drainage observed with cholangiography.13 In the case reported by Choi and colleagues, MRCP was used as ancillary technique in response to insufficient delineation by cholangiography, and this resulted in the addition of a fifth type to the classification system.1 In our view, this description by Saito and colleagues13 was not consistent with the anomalies detected by MRCP in our patient and as reported by Choi and colleagues.1 A major drawback of this classification system is the absence of any description for data of intrahepatic origin. In addition, the description by Saito and colleagues excluded DEBD anomalies that drain into the upper gastrointestinal tract.5 Therefore, the MRCP technique would be improved by a new classification system that encompasses all details from the origin to the distal end of the anomaly, with the descriptions and terminology we propose here. Future reports of new cases with diverse features discovered with the MRCP technique will improve the discussion on this topic.

Yamashita and colleagues emphasized the importance of drainage location rather than anatomic appearance,2 and they suggested that abnormal biliary duct drainage may cause severe abnormalities such as gastric and biliary malignancies, biliary cysts, and choledocholithiasis.2 They also emphasized that drainage to a second portion of the duodenum and pancreatic duct are more common.2 However, knowledge of anatomy details is crucial for preventive measures, treatment planning before ERCP and surgical intervention, selection of therapeutic modality, and prediction and prevention of potential complications during treatment.

Our report had 2 main conclusions. First, thin-section 3D MRCP and postprocessing techniques facilitated excellent visualization, and this technique was superior to ERCP because 3D MRCP is noninvasive. Here, we have reported whole anatomic details of a right posterior aberrant extrahepatic biliary duct, for which there is only a single previously reported case in the literature.

Second, in the presence of a second biliary duct, detailed anatomic data obtained from the MRCP technique may help to establish a comprehensive terminology, and future reports of MRCP findings will support the development of this classification system.

From the 1Department of Radiology, Baskent University Faculty of Medicine, Ankara; the 2Department of Radiology, Zeynep Kamil Women and Children’s Diseases Training and Research Hospital, Istanbul; and the 3Department of Gastroenterology, Private Erciyes Hospital, Kayseri, Turkey
Acknowledgements: The authors have not received any funding or grants in support of the presented research or for the preparation of this work and have no declarations of potential conflicts of interest
Corresponding author: Hatice Ozturkmen Akay, Baskent University Faculty of Medicine, Yukari Bahçelievler, Mareşal Fevzi Çakmak Cd. No:45, 06490 Çankaya/Ankara, Turkey
Phone: +90 312 212 90 65
E-mail: hozturkmen@gmail.com 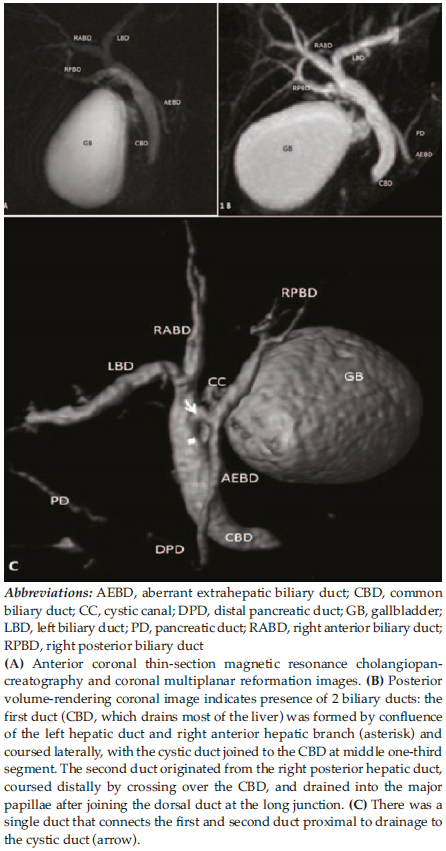