Vision loss is a global public health problem with multiple causes that influence populations worldwide. According to the “Vision 2020” reports by the International Agency for Prevention of Blindness, over 1.1 billion people live with vision loss.1 Fifty-six million people have vision loss for reasons that include neglected tropical diseases, retinopathies, and corneal opacities.1

Corneal diseases are a significant cause of visual impairment, and it remains a challenge to determine the real global impact of corneal blindness.2 Keratoplasty is the only effective treatment for corneal opacities; however, there is a significant imbalance in the number of available donor corneas and patients waiting for corneal transplantation, particularly in low- and middle-income countries.3-5 Turkey is an upper-middle-income country with an average number between 2012 and 2019 of annually perfor­med keratoplasties of over 3000, according to the Ministry of Health data.6 However, with 1275 patients waiting for surgery, a drastic disproportion remains between the supply and demand for donor corneas.7

Awareness and attitudes toward cornea donation have been reported for numerous populations.8 Such information is crucial in ascertaining and addressing challenges in cornea donor availability. The only study from Turkey has shown that, of 1000 participants, 54.7% were willing to donate their corneas.9 However, this study surveyed individuals who presented to the outpatient clinic in the hospital, and the survey was carried out by doctors, which may have therefore been biased and not representative of the general population. In the present study, we aimed to deter­mine a much broader aspect of the level of knowledge, awareness, and willingness toward cornea donation in a much larger sample size using a Web-based questionnaire. This approach allowed us to mitigate the social desirability bias associated with the face-to-face interview on a sensitive topic as cornea donation.

A questionnaire on awareness and attitudes toward cornea donation in the Turkish language was prepared and uploaded to an online survey platform (Google survey, Alphabet Inc). The English translation of the survey is given in Figure 1. The link of the electronic survey was disseminated nationally to participants via electronic mailing services, a social media platform (Facebook), and a cross platform (WhatsApp). Participants were requested to share the electronic link of the survey with their contacts. The study protocol adhered to the tenets of the Declaration of Helsinki, and institutional ethics board approval (Eskisehir Osmangazi University Non-invasive Clinical Research Ethics Board Decision #09, dated January 22, 2019) was obtained.

The questionnaire consisted of 23 questions, including open-ended and multiple-choice questions. There were 6 parts to the survey as follows: parts 1 and 2 examined socio-demographic data and existing chronic eye diseases, parts 3 and 4 evaluated the level of knowledge for cornea donation and willingness to donate along with reasons for willingness/unwillingness to donate, and parts 5 and 6 asked whether the level of cornea donation was sufficient within the country and possible reasons why the public might be negative toward cornea donation from the survey participant’s perspective.

Respondents were allowed to give more than one answer to “reasons for willingness/unwillingness” questions. Age was stratified based on tertile distribution (group 1: ≥18 and ≤26 years old, group 2: ≥27 and ≤42 years old, group 3: ≥43 years old). Occupations were categorized according to the International Standard Classification of Occupations (ISCO-08) that was published in 2008.9

Socio-demographic characteristics
Our analyses included 2301 participants who completed the survey; their socio-demographic characteristics are shown in Table 1. The mean age of the participants was 35.9 ± 13.9 years (range, 18-80 years). Of 2301 participants, 842 were men (36.6%) and 1459 were women (63.4%). Regarding level of education, 73.3% of participants had a bachelor degree or higher, 24% had a high school or associate degree, and 2.6% had secondary school education or below. Regarding professions, 27.9% of the participants were university students, 20.2% were health care professionals, 13.3% were retired, 9.2% were education professionals, 7.7% were government professionals, 0.5% were artist professionals, and 6% were housewives; the remaining were categorized as “other professions.” The frequency of having at least 1 health care professional in the family was 39.5%. The frequency of having a chronic eye disease was 50.8% in the sample population. Participants were distributed inhomogeneously among geographical regions, with most from the central Anatolian region (21.3%), followed by the Marmara region (11.9%), the Aegean region (3.0%), the Black Sea region (2.3%), the Mediterranean region (2.0%), the southeast Anatolian region (0.7%), the east Anatolian region (0.6%), and Turkish citizen living abroad (0.9%).

Reasons for a positive or negative attitude toward cornea donation
As shown in Table 5, slightly less than half of the participants (43.6%, n = 1004) were unwilling to donate their corneas. The major disclosed reason (48.5%) was “lack of information.” Other leading reasons for negative attitude toward cornea donation were “religious and cultural concerns” (40.4%), “my family will not support my decision” (8.8%), “my body will not receive due respect” (8.3%), and “my cornea may be taken before I die” (8.3%).

Self-perceived reasons for a negative public attitude toward cornea donation in the overall sample were as follows in descending order: “lack of information” (84.8%), “religious and cultural concerns” (55.8%), “my cornea may be taken before I die” (33.7%), “my family will not support my decision” (27.4%), “my body will not receive due respect” (18.2%), and “there will be obvious disfigurement after cornea removal” (15.7%) (Table 5).

Our study provided survey results on the level of knowledge, awareness, and willingness toward corneal donation and transplantation in a Turkish population. Only 1 other study has reported public opinions of Turkish people on cornea donation and transplantation; however, that study was conducted on patients who presented to an ophthalmology outpatient clinic.9 Furthermore, the questionnaire had been administered by physicians using a face-to-face interview technique, both of which (a physician surveyor and face-to-face interview technique) could create a propensity for social desirability bias. The questionnaire used in our present study surveyed a much broader perspective, with 23 questions struc­tured into 6 parts, which allowed us to probe into factors that could predict positive attitudes toward cornea donation as well as the reasons for positive or negative attitudes. Reasons for unwillingness toward corneal donation were questioned both in a direct and indirect manner. We conjectured that some individuals may feel more reserved and may not disclose their personal reasons clearly on why they are unwilling to donate their cornea. A negative attitude toward cornea donation may also be considered socially undesirable and therefore alter personal justifications. Therefore, we also asked participants to respond from the society’s perspective so as to unravel undisclosed reasons.

A review paper that analyzed a total of 55 surveys from 13 different countries identified modifiable and nonmodifiable reasons cited for a negative attitude toward cornea donation.8 Consequently, “religion” was defined as an unchangeable factor, whereas “having knowledge about corneal transplantation” was defined as a changeable factor.8 Similarly, our findings indicate that individuals with “high” education level and individuals with knowledge on corneal transplantation and donation are more likely to donate their corneas. In particular, 68.3% of the participants who stated knowledge on cornea transplantation and donation responded that they would donate their cornea (data not shown). Likewise, it may be purported that unrealistic concerns such as procurement of the cornea before death, lack of respect to the deceased body, or disfigurement to surrounding tissues after cornea removal may be considered modifiable reasons and may be remedied by means of community education.

Interestingly, among the 2301 participants in our Turkish population, some concerns were revealed that pointed toward unwillingness toward corneal donation. The 2 major disclosed reasons for unwillingness were “my body will not receive due respect” and “my cornea may be taken before I die.” However, “religious and cultural concerns” were also observed to justify unwillingness among the participants. Similar to our findings, it has been previously reported that belief characteristics were significant factors in the rate of unwillingness to donate among Singaporean adults.18,19 Of note, in a previous study conducted on nursing undergraduate students in India, 10.7% indicated “religious restrictions in separating eyes from the body after death” as a factor against donation.20

Individuals who had a health care professional in their family were more likely (OR = 1.23) to be willing to donate their cornea. We hypothesize that this is because they are more knowledgeable on health and health care. Participants who had a chronic eye disease were also more inclined to show positive attitudes (OR = 1.13) toward cornea donation. Considering their time spent in the hospitals, they may have been exposed to various informative materials or personal communications about corneal donation. Accordingly, this might have heightened empathic behavior to other patients with visually debilitating disorders.

Although teaching professionals and housewives showed negative attitude for willingness toward corneal donation in our univariable analysis, the multivariable stepwise model did not show these variables as significant predictors. However, it is quite interesting and controversial to observe that teaching professionals are negatively biased toward cornea donation. This makes it crucial to deliver accurate information on cornea and organ donation, prioritizing those who are in the position to impart knowledge to younger generations.

In recent years, Web-based survey studies have gained popularity in the medical field with the common use of on-line instruments.21-23 When compared with conventional face-to-face methods, Web-based surveys are more economical, provide access to more people in the shortest time, minimize data entry failures, and provide online access to difficult-to-reach special groups.21-23 Principally, thanks to the data anonymity provided by Web surveys, participants are given confidence to frankly answer survey questions without any stress; this method also mitigates social desirability bias.24 This is significant for learning real opinions from hesitant populations in physical meetings.24 However, the inability to reach illiterate or technology-deficient populations and the necessity of technological equipment and infrastructure remain disadvantages of Web-based surveys.23

With regard to Web-based surveys, there is a high possibility that participants have similar profile characteristics and similar interests or perspectives to other participants.25,26 Moreover, the population of participants in Web-based surveys may consist of frequently contacted friends and/or colleagues, which can lead to overrepresentation of a particular point of view. This may cause sampling bias.25,26 According to our socio-demographic data, although 39.5% of the participants had at least 1 health care employee in their family, 20.2% of participants were in the health care sector. Regarding the presented socio-demographic results, although most of our respondents were in the health care service, we could state that this Web-based survey study was well spread across different occupational groups. Similarly, conventional surveys on the subject have also individual limitations since they are carried out in a single or few centers.8,9,25 The participants simulated a population in Turkey in which answers were obtained. With respect to sociodemographic results, the participants may not have reflected the general Turkish population because they were distributed inhomogeneously among geographical regions. Hence, it is unclear whether awareness and attitudes toward cornea donation obtained from the results of this study are reflective of opinions in the general Turkish population.

Community education may help to alleviate some of the unrealistic concerns that have been cited as reasons for negative attitudes toward cornea donation in this study. Conventional mass media devices and, more importantly, various on-line platforms might be instrumentalized to raise awareness about cornea donation. Furthermore, short lectures on the importance of organ and tissue donation can be added to the curricula of secondary school teaching, with the hope of inculcating a positive attitude at a much earlier stage of life. 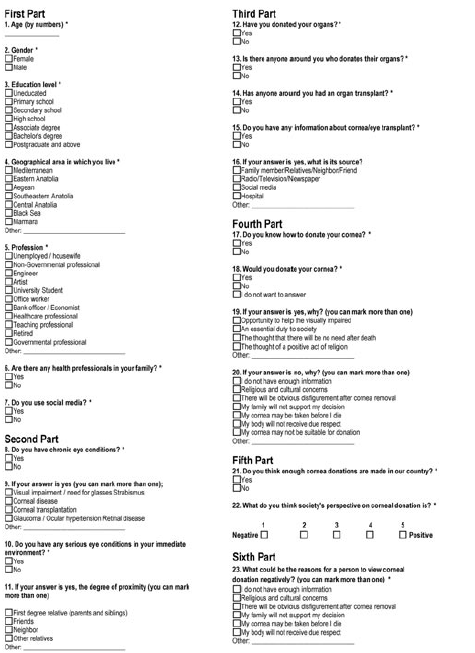 Figure 1. English Translation of the Survey 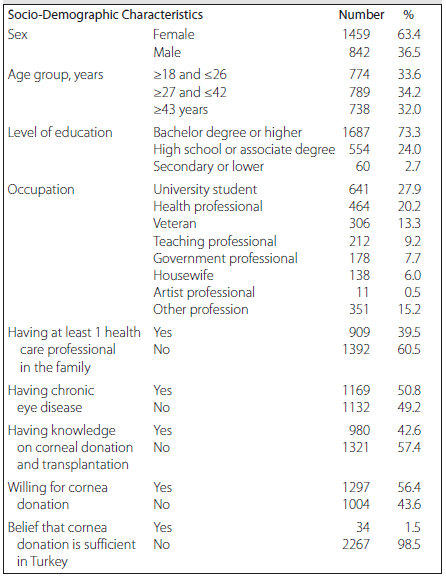 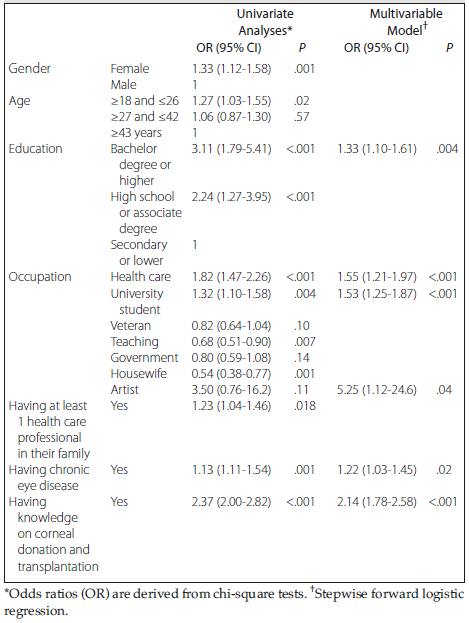 Table 4. Results of Regression Analyses Between Willingness Toward Corneal Donation and Associated Factors 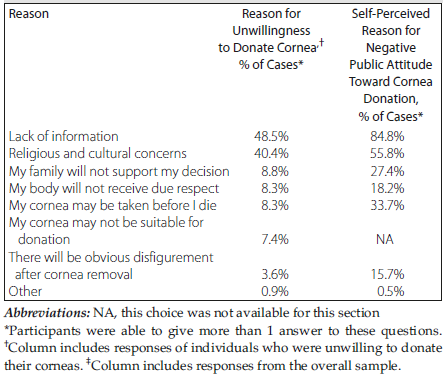 Table 5. Reasons for Individual Unwillingness to Corneal Donation and Self- Perceived Reasons for Negative Public Attitude Toward Cornea Donation