Objectives: Peripheral nerve injuries are common in Europe; however, the treatment techniques may lead to disabilities. This study aimed to evaluate the effect of tacrolimus use on the capacity of the epineural sheath graft to improve its regeneration quality in rat sciatic nerves as a treatment option for nerve injuries.
Materials and Methods: In the experimental process, 30 male Sprague Dawley were used as recipients and 10 Wistar rats were used as donors. Under anesthesia, all rats were operated on to resect the sciatic nerve. The nerve tissue of Wistar rats was used as allograft. In the autograft group, the resected nerve was reversed and sutured, resulting in an epineural sheath graft. For the allograft groups, rats were randomly divided into 2 groups as the tacrolimus-treated group and the nontreated group after allograft transplant. Tacrolimus was administered intramuscularly at 0.1 mg/kg daily for 12 weeks. After the treatment period, rats were killed and evaluated histomorphologically with light and electron microscopy.
Results: Histological examination showed no remark­able differences between different regions of the sciatic nerves (distal, middle, and proximal). The axonal density was decreased in the allograft groups compared with the autograft group (P < .001). Results showed that the number of mast cells was increased in the allograft group without tacrolimus treatment (P < .05). Similarly, there was a mild increase in mast cell count in the tacrolimus-treated allograft group.
Conclusions: Our results showed that tacrolimus use in rats with implanted epineural nerve sheath supported recovery in terms of morphological and physiological regeneration of the nerve.

Peripheral nerve injuries are frequently encountered in surgical practice and lead to the loss of sensory and motor function. These injuries can also result from trauma, tumor, or iatrogenic injury. Intractable neuropathic pain, in addition to functional loss, also diminishes the patients’ quality of life.1 Every year in Europe, 300 000 patients are treated for peripheral injuries.2 Developments in the understanding of the pathophysiology of nerve injury and microsurgical techniques have improved nerve repair results. Since Millesi3 first described an epineural nerve repair technique in 1973, autologous nerve grafts have become the gold standard when there is a gap between the nerve ends. However, this technique is still insufficient and may lead to disability at the donor site.4 Tubulization and allograft methods are also new options according to the size of the nerve gap.5

Tacrolimus (FK506) is an FDA-approved antineo­plastic drug that is commonly used for the treatment of solid tumors. However, it is also used as an immunosuppressant in allografts to prevent graft rejection. Tacrolimus is not only an immunosup­pressant but is also a functional molecule that acts via a number of mechanisms, including reduction of nitric oxide, neurotrophic effects, and reduction of scar formation.7-9 However, because of its toxicity in long-term use,10-12 its use is limited.

In this study, the effects of tacrolimus use on allogeneic tubulized epineural sheath graft bridging of the nerve gap in a rat sciatic nerve injury model were investigated and the results versus an autograft group were compared.

Ethical approval
In compliance with Turkish law on the use of animals in experiments, all experimental protocols were approved by the Akdeniz University Animal Care and Use Committee (70904504/103), and the principles and guidelines developed by the New York Academy of Sciences were followed.

Surgery and experimental groups
Sprague Dawley rats were randomly divided into 2 groups as the autograft (control) group (n = 10) and allograft group (n = 20). Wistar albino rats (n = 10) were only used as donor rats, with 20 epineural sheath grafts provided from their right and left sciatic nerves. Under ketamine and chlorpromazine anesthesia (100 and 0.75 mg/kg, respectively), all rats (n = 40) received an oblique skin incision on the lateral of their femurs. After incision, biceps femoris muscle was retracted and connective tissue was isolated to ensure adequate visibility; a 10-mm-long sciatic nerve was then resected.
In the autograft group (n = 10), a 10-mm segment of the sciatic nerve was reversed and sutured back with 9-0 nylon suture, after which the wound was closed. Rats in the allograft groups were randomly divided into tacrolimus-treated and nontreated groups (n = 10 per group). All 20 rats in the allograft groups were treated with an epineural sheath graft. The epineurium of the removed nerve segment from the Wistar donor rat was incised longitudinally, the fascicules of the nerve were removed, and a flat rectangular-shaped epineural sheath graft was created. The flat rectangular epineural sheath was used to repair the defect as a full graft without longitudinal splitting. The sheath was sutured to the proximal and distal stumps with 2 epineural sutures placed 180 degrees apart. All coaptations were performed using standard microsurgical epineural suture technique with 10-0 nylon suture under surgical microscope (×40 magnification). After surgery, tacrolimus was administered daily (0.1 mg/kg intramuscularly) for 12 weeks.

Histomorphometric analyses
After assessment of functional recovery at 12 weeks, 3 pieces of sciatic nerve sections, including at the proximal, midgraft, and distal levels of the nerve, were excised. Some parts of the tissues were fixed in 10% formaldehyde, dehydrated, and embedded in paraffin. Next, 4-μm-thick paraffin sections were placed on glass slides and stained with Gomori trichrome method for light microscopy evaluations of connective tissue and tissue morphology. The epineural tube transversal sections, just proximal to the distal coaptation site and just proximal to the proximal coaptation site, were used for analyses.
The other parts of the tissues were fixed for 4 hours at 4 °C with 2.5% glutaraldehyde solution in 0.1 M phosphate-buffered saline (PBS; pH 7.2) for transmission electron microscopy evaluations. After fixation, PBS-washed tissues were postfixed with 1% osmium tetroxide solution for 1 hour at room temperature and washed with PBS again. Tissues were then passed through increasing alcohol concentrations (70%, 90%, 96%, 100%) for dehydration and incubated in propylene oxide/Epon mixture overnight and embedded in Epon 812. The Epon blocks, which included tissue specimens, were cut with an ultramicrotome (Leica Ultracut R, Wetzlar, Germany) in semi-thin sections (900-1000 μm in thickness) and stained with toluidine blue. Toluidine blue-stained semi-thin sections were used to determine the proper orientation for thin sectioning and counting the numbers of axons and mast cells. For quantitative analyses, 2 photographs were taken from each section at ×400 magnification by an investigator blinded to the treatment group under an Olympus BX51 photomicroscope. Five regions from each photograph were examined to perform counting. For each slide, 10 areas equal to an area of 30 000 μm2 were evaluated. The axonal density and axonal count were evaluated in these sections. Mast cells were also counted in the micrographs using the same method.
From each Epon block of the experimental groups, 60-nm-thick to 70 nm-thick thin sections were placed on copper grids and stained with uranyl asetate and lead citrate and then examined with a JEOL 1200 EXII transmission electron microscopy.

Clinical observations
In all animals, the nerve gap was bridged suc­cessfully at 12 weeks. Epineural conduits were intact, and no neuroma formation or nerve growth outside the tube was observed.

Histomorphometric analyses
In all groups, there were no differences between the different regions of the sciatic nerves (distal, middle, and proximal) in terms of histological findings. Formation of myelinated axon fibers in the epineurium and formation of perineurium and endoneurium were observed in all groups. Most of the myelinated axon fibers were seen in regular morphology, although some of the fibers in the nontreated allograft group showed degeneration in the myelin sheath. Myelinated nerve fibers were observed to be surrounded by endoneurium and axon bundles by perineurium. Mast cells were seen in the connective tissue in the same group. In the tacrolimus-treated allograft group, myelinated axon fibers with regular morphology were observed as well as low numbers of fibers with degenerated myelin sheath; connective tissue amount was also found to be increased. Perineurium formation was present; however, some of the connective tissue had irregular morphology. In the autograft group, mild increases in connective tissue and myelinated axons with regular morphology were observed in addition to some of them having degenerated appearance (Figure 1, 2, and 3). Electron microscopic evaluations were consistent with our light microscopic results (Figure 4).
The axonal density was evaluated, and mast cells were counted in the micrographs. When compared with the autograft groups, axonal density was decreased in the allograft groups (P < .001). Mast cell count was increased in the allograft group that was not treated with tacrolimus (P < .05). Similar to the nontreated allograft group, there was a mild, insignificant increase in the tacrolimus-treated allograft group (Figure 5).

Tacrolimus, also known as fujimycin or FK506, is a highly potent immunosuppresive drug with neurogenerative and neuroprotective effects.13-16 To date, in peripheral nerve injuries, autologous nerve grafts are the gold standard.17 Whenever use of grafts is not possible, other options like bioabsorble conduit or decellularized human allograft nerves have been used by surgeons.18 However, so far, there are no available options better than autografts.19 Many studies have reported the effects of systemic tacrolimus administration after peripheral nerve injury. Both systemic and locally administered tacrolimus has shown beneficial effects; however, the administration route, dose, and therapeutic effect are still not clear.20-23 In our study, we hypothesized that both systemic and local administration of tacrolimus with epineural tube graft would improve regeneration and recovery. We supposed that supplementing nerve repair with tacrolimus would increase the regeneration and recovery rates compared with repair of injuries treated with allograft alone.
Nerve grafts, except for autologous grafts, have so far shown similar efficacy and their use is limited with gaps up to 3 cm.5 Artificial resorbable nerve guides have an effect similar to autologous grafts; however, they have not been successful with larger gaps.1 Among research strategies to improve recovery after nerve injury, there are several methods, including use of immunosuppresive drugs to augment nerve regeneration and to facilitate allografting of nerves. Some of these in vivo studies have reported the neurotrophic effect of tacrolimus with systemic administration.9,12,24 Limited studies have also demonstrated the effects of locally administered tacrolimus.13,21,25-27 Mekaj and associates reported that local administration of diluted tacrolimus directly at the end of surgery improved nerve regeneration.27 Li and associates26 loaded tacrolimus into chitosan and found improved nerve regeneration outcomes at 8 weeks. Similar to Li and associates, in recent studies from Tajdaran and colleagues, rats received fibrin gels, which were loaded with tacrolimus microspheres. Those studies showed doubled nerve repair rates at the end of the third week.21,25 Azizi and associates also reported that a tacrolimus-loaded vein graft, as an in situ tacrolimus delivery system, was a successful alternative to bridge the defects.13
In contrast to these reports, in our study, we could not find a significant improvement in the tacrolimus-treated group compared with the nontreated group. The reason for this difference may the different administration of tacrolimus at the end of surgery locally and systemically in the following days. All metrics revealed that autografts are still the gold stan­dard in peripheral nerve regeneration. However, our present results suggested mild recovery with tacrolimus treatment, as shown by elevation of the density of axon fibers by suppressing mast cell accumulation. 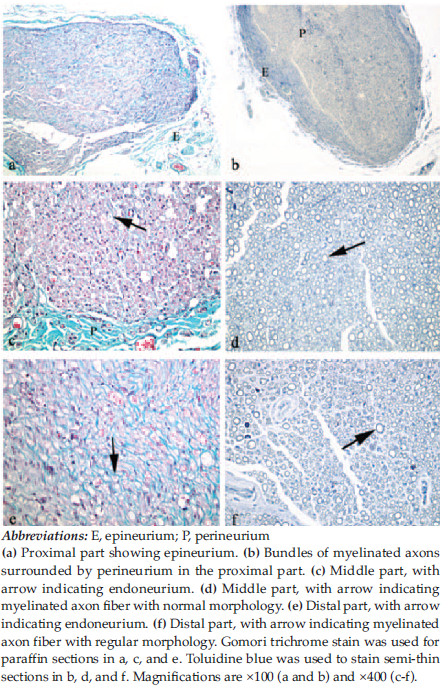 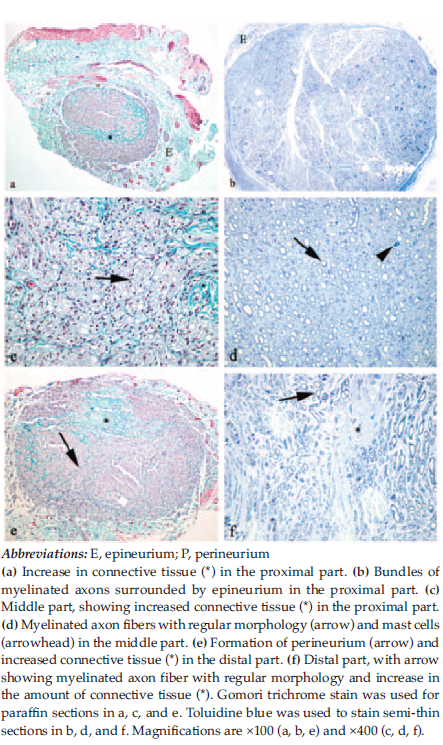 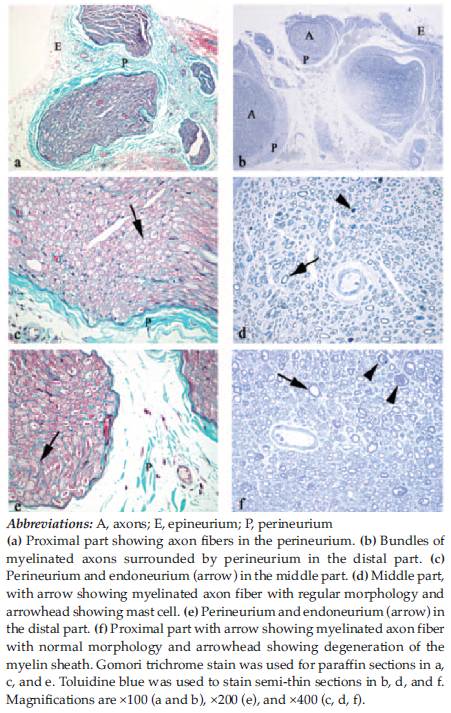 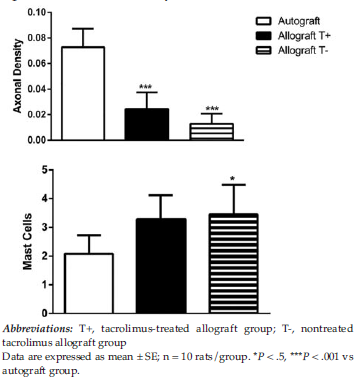