The human major histocompatibility complex system, also known as the human leukocyte antigen (HLA) complex, expresses proteins that determine acceptance or rejection of the transplanted tissue in organ transplants performed between 2 different individuals.1 The major histocompatibility complex proteins are also antigenic; that is, personal exposure to non-self HLA antigens via pregnancy, transfusions, and/or transplants may cause the formation of anti-HLA antibodies known as panel reactive antibodies (PRA).2-5 Surprisingly, the presence of PRA has been shown in healthy people unexposed to alloantigens.6 There are no clear data on the developmental process of these antibodies.

In the solid-organ transplantation field, it is known that the positivity of PRA in recipients affects transplantation outcomes negatively.7,8 In the treatment process of acute leukemias, multiple blood transfusions are required, which poses a risk of PRA formation.9 Furthermore, allogeneic hematopoietic stem cell transplantation (allo-HSCT) is used as a curative treatment option for acute leukemias with high-risk features and/or are relapsed or refractory to conventional chemotherapy.10,11 Approximately 30% of patients who need allo-HSCT do not have HLA-compatible related transplantation donors; as a result, haploidentical, cord blood, and unrelated HSCT procedures have become topics of interest in recent years.12 For allo-HSCT, graft failure risk is also highly increased by the presence of donor-specific anti-HLA antibodies (DSA).13-19

In this prospective single-center study, we aimed to determine PRA status at diagnosis and during follow-up in the acute leukemia setting.

We enrolled newly diagnosed 35 patients who applied to Ankara University Hematology Department between December 2015 and December 2017, according to 2016 World Health Organization clas­sification of acute leukemias.20 Anti-HLA antibodies were screened by with Lifecodes LifeScreen Deluxe screening assay (Luminex) against class I and class II antigens in patient serum samples that were obtained before induction therapy and every 3 months thereafter until the last follow-up or death, whichever occurred first. In 12 of 14 patients who underwent allo-HSCT, serum samples in the first month of transplantation were also obtained. For samples with a mean fluorescence intensity (MFI) value ≥1000 against class I or II antigens, Lifecodes LSA class I and/or class II kits were used to assess antibody specificity; an MFI value of ≥1000 against any antigens was considered positive for PRA.

Donor characteristics, stem cell source, and preparation regimen were recorded for allo-HSCT recipients. Neutrophil and thrombocyte engraftments were defined as the first day of ≥3 consecutive days with an absolute neutrophil count ≥500 counts/μL and with an absolute thrombocyte count ≥20 000 counts/mm3 without support, respectively.

The study was approved by the local ethics committee of the Ankara University (No. 20-864-15). All participants gave written informed consent, and the study was conducted according to the Helsinki Declaration.

Statistical analyses
All statistical analyses were performed with SPSS software (version 22). Data are shown as total numbers and percentages for categorical variables. We used the chi-square and Fisher exact tests to investigate the relationship between 2 categorical variables. Continuous variables were compared by Mann-Whitney U test and shown as median with minimum-maximum (min-max) or interquartile range (IQR). For transfusion load data, we used the Kruskal-Wallis test to compare groups. We used the Kaplan-Meier analysis for survival analysis. P < .05 was considered statistically significant.

Panel reactive antibodies after induction therapy
At the end of the 3-month follow-up, 1 patient was lost to follow-up, and 4 patients died (Figure 1). Of the remaining 30 patients, 3 (10%) had antibodies against either class I (n = 1, patient 9) or both class I and class II (n = 2, patient 5 and patient 16). A male patient (patient 17) with antibodies against class I at his diagnosis died of mesenteric ischemia after 9 days of induction treatment. Another patient (patient 15) did not have any antibodies detected by the end of the 3-month follow-up period and consecutive follow-ups (402 days).

Engraftment failure was observed only once, which was after a haploidentical transplantation from a son to a father (patient 11) who was positive for PRA but not positive for DSA. This patient had PRA against A*66:02 between month 0 and month 3, which was before the preparation regimen. The MFI value was 1005. Before his second haploidentical HSCT, he had no PRA, and the result was a successful engraftment.

Survival and panel reactive antibodies
Twelve of 25 patients (48%) who did not have PRA died, and 4 of 10 patients (40%) who had PRA at any time died. No statistically significant difference was found between the overall survival of patients with and without PRA (P = .71).

The incidence rate of developing de novo PRA in the entire cohort was 5.5 per 10 000 person-days.

It is known that a history of pregnancy increases antibody incidence in healthy female blood donors.2,4 We also found that pregnancy is a risk factor for the emergence of PRA in the event of acute leukemias. Nevertheless, in a study from 2008, antibodies against HLA class I were detected in 42% of healthy male blood donors, and these antibodies were thought to be natural antibodies that were not a result of alloimmunization but rather were the result of exposures to bacterial or viral agents.6 In our study, there was only 1 patient who had no previous alloimmunization but had PRA. Antibodies in this male patient were against A*33:01 and A*33:03, as identified in the aforementioned study.6 Furthermore, some other positivity screens with high MFI values detected at diagnosis of our patients with a history of pregnancy were also considered to be the result of natural antibodies in the same study.6 However, we do not know whether the existence of these natural antibodies affects transplantation outcomes. Future studies may clarify whether these antibodies should be assessed as alloantibodies and which MFI threshold value is to be accepted as significant.

Due to the detection of PRA in patients who need intensive transfusion during the treatment period, alloimmunization has been shown to remain a problem despite modern techniques.22-24 In our study, the rate of antibody positivity after transfusions varied between 4.5% and 10%; however, the number of transfusions did not correlate with the rate of antibody positivity. This result is consistent with a previous study performed in leukemia patients.25 It is also known that the antibodies that formed in the course of transfusions may disappear despite continued transfusions,26 suggesting that PRA have a dynamic cycle. It has been demonstrated that an underlying hematological condition is also independently associated with PRA formation; specifically, myelodysplastic syndrome has a higher risk for the development of PRA, unlike acute leukemias.27 The incidence rate of PRA positivity was very low in our study, which also supports the diverse dynamic of acute leukemias for the formation of PRA.

In the study of Leffell and colleagues, there was a further increase in antibody titers against HLA class I detected posttransplantation period, which may be caused by alloimmunization with posttransp­lantation platelet transfusions.28 In our study, antibodies against HLA class I were observed more than antibodies against HLA class II in the first month of follow-up after transplantation (4 vs 1). In addition, the patient with antibodies against class II did not have de novo antibodies. However, in our study, for the existence of PRA against class I antigens, the number of units of platelets transfused had a median value of 5.0 units (min-max, 2.0-25.0 units) in the patients with antibodies and a median of 4.0 units (min-max, 2.0-29.0 units) in the patients without antibodies after transplantation (P = .94). The limited number of patients may have caused an underestimation of the effect of platelet transfusions. Furthermore, PRA of stem cell transplantation donors may be detected in stem cell recipients, with some perhaps developing platelet transfusion refractoriness, and the existence of these antibodies in the recipients was linked to the transmission of donor-originating antibody-producing cells.29 In our study, the rate of the history of donor alloim­munization was 75% in patients with de novo antibodies versus 12.5% in patients without antibodies. It may be that transplantations from alloimmunized donors cause recipients to have donor PRA. Unfortunately, we did not scan donor sera for PRA. In another study, it is also found that donor-derived antibodies could be associated with the development of chronic GVHD but not acute GVHD in the recipients.30 In our study, acute or chronic GVHD developed in 3 of 4 patients (75%) who had de novo antibodies against class I. Our study supports the notion that the formation of PRA increases the risk of GVHD even in the context of fully matched transplantations.

To our knowledge, our study is the first study to establish the time course of anti-HLA antibody formation and disappearance of these antibodies in acute leukemias. We found that pregnancy was linked to existence of PRA, and transfusions in the acute leukemia setting were not a risk factor for the formation of PRA. Since the immune systems of patients with acute leukemia are suppressed for a variety of reasons, antibody responses to alloantigens might decrease in these patients despite intensive transfusions. Nevertheless, some patients develop de novo antibodies during the treatment period. It is not known which individuals are prone to developing these antibodies in the leukemia setting. Also, it is known that pretransplantation DSA cause antibody-mediated graft rejection. There is no consensus on the clinical significance of the antibodies formed after transplantation and whether antibody screening should be performed on donors. There is a need for wider studies to demonstrate the mechanisms of antibody formation and immuno­logical consequences of these antibodies in acute leukemias. 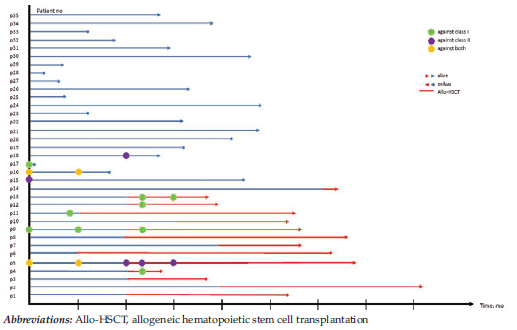 Figure 1. Follow-up Duration of the Entire Cohort and Types and Time Points of Anti-HLA Antibody Positivity 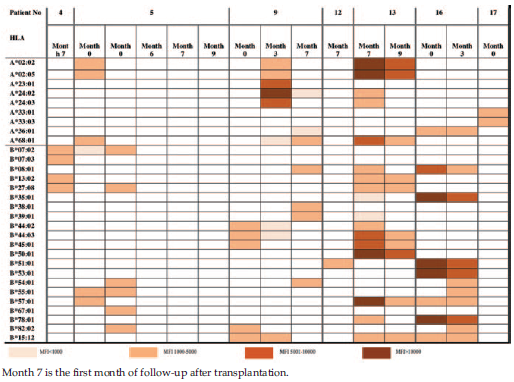 Figure 2. Class I Antibodies of the Patients 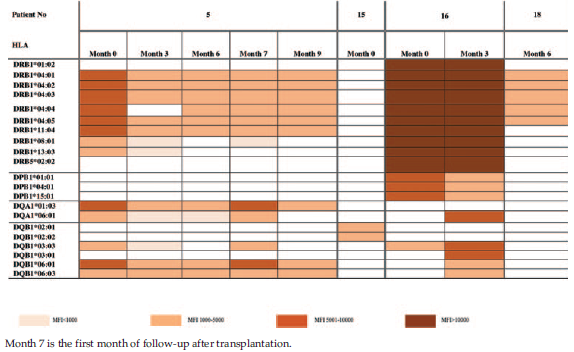 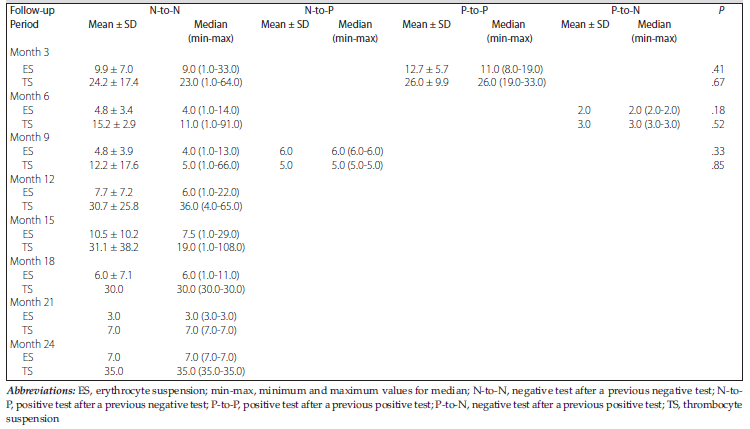 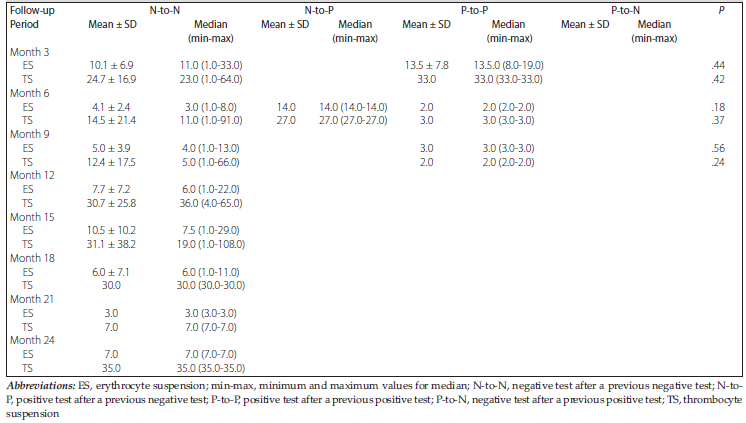