Hepatocellular carcinoma (HCC) is the fourth leading cause of cancer deaths in the world.1 In Egypt, HCC is the third leading cause of among cancers in men.2 Egypt ranks the third country in Africa and fifteenth country worldwide in HCC prevalence.3 The extremely poor prognosis of HCC is largely due to the high rate of intrahepatic metastases, which develop through invasion of the portal vein and spread to other parts of the liver.4 Conventional methods of cancer therapy, such as surgery, radiation, and chemotherapy, are either invasive or have undesirable side effects. Therefore, exploring new therapeutic strategies to control the progression of HCC is the key issue for prolonging patient survival.5,6

Advances in stem cell biology have made the prospect of cell therapy and tissue regeneration a clinical reality.7 Mesenchymal stem cells (MSCs) possess a number of properties that make them suitable candidates. They are easily obtained from a simple bone marrow aspirate and are readily expanded in culture without losing their multilineage potential. They are readily transducible, allowing for simple ex vivo modification; finally, they also appear to be relatively nonimmunogenic due to their expression of major histocompatibility complex I (MHCI) and lack of MHCII and costimulatory molecules CD80, CD86 and CD40.8,9 This may allow the delivery of genetically dissimilar MSCs without the need for immunomodulation or subsequent immunosuppressive therapy for the recipient.

Mesenchymal stem cells have received much attention in the field of stem cell transplantation because they not only support hematopoiesis but also exhibit a profound immunosuppressive activity that targets mainly T-cell proliferation.10 Previous studies have shown that hematopoietic stem cell transplantation can have tumor-inhibitory effects in patients with solid tumors as well as antitumor effects in metastatic breast, ovarian,11 kidney, prostate,12 and pancreatic cancers.13 Growing evidence shows that human MSCs home to sites of tumorigenesis, where they inhibit the malignant phenotypes of human liver cancer cell lines.14 The stem cell microenvironment has an essential role in preventing carcinogenesis by providing signals to inhibit proliferation and to promote differentiation.15

The present work aimed to evaluate the tumor suppressive effects of MSCs on the in vivo progression of HCC in a murine model.

Declarations
This study was reviewed and approved by the ethics committee of Theodor Bilhariz Research Institute (TBRI), and methods (including samples collection) were carried out in accordance with relevant guidelines and regulations.

Preparation of bone marrow-derived mesenchymal stem cells
Bone marrow-derived mesenchymal stem cells (BM-MSCs) were prepared according to Moharib and colleagues.16 Bone marrow of rats was harvested by centrifugation of tibiae and femurs of rats. Red blood cells were lysed using ammonium-chloride-potassium lysing buffer (GIBCO/BRL). Nucleated cells were suspended in complete Dulbecco’s modified Eagle culture medium supplemented with 20% fetal bovine serum, 1% L-glutamine, and 1% penicillin-streptomycin (all from GIBCO/BRL). Cells were incubated at 37 °C in a 5% humidified CO2 incubator for 14 days. After 14 days, large colonies were observed. Cultures were washed with phosphate-buffered saline (GIBCO/BRL), and the cells were trypsinized with 0.25% trypsin in 1 mM EDTA (GIBCO/BRL) for 7 minutes at 37 °C. Cell suspensions were collected and centrifuged. Cells were resuspended in complete medium and incubated in 25-cm2 culture flasks (Falcon) (referred to as passage 1 culture). On 80% confluency, cells were trypsinized and counted. Cells were characterized by morphology, adherence, and power to differentiate into osteocytes and chondrocytes.

Animal model
Fifty albino female rats of about 3 months of age and 110 to 130 g weight served as the recipient model and 5 male rats served as the BM-MSC donor model.

The Ethical Committee of Experimental Animals at TBRI approved the protocols. All guidelines for the care and use of animals were followed, according to ethics committee of TBRI. Rats were maintained under constant temperature and humidity and fed a standard diet.

Labeling of cells with PKH67 stain
Cells were labeled with PKH67 (Sigma-Aldrich) according to the manufacturer’s instructions. In brief, cells were harvested by trypsinization and washed twice, and cell count was adjusted to 4 × 107 in medium without serum. Cell suspension was centrifuged at 400× gravity for 5 minutes into a loose pellet. After cell centrifugation, the supernatant was aspirated, leaving ~25 mL of supernatant. Next, 2 mL of diluent C were added to the cell pellet, and gentle pipetting was performed to ensure complete dispersion. We then added 8 μL of the PKH67 ethanolic dye solution to 2 mL of diluent C, which was mixed well to disperse. Cells were added to the dye solution, mixed well, and incubated for 5 minutes on a shaker. The staining was stopped by adding an equal volume (4 mL) of fetal bovine serum and incubation for 1 minute. Cells were centrifuged at 400× gravity for 10 minutes and washed 3 times in 10 mL of complete medium. Cells were resuspended in 10 mL of complete medium for assessment of cell viability and fluorescence intensity. Finally, cells were centrifuged and resuspended in phosphate-buffered saline and count was adjusted to 30 × 106 cells/mL.

Transplantation of bone marrow-derived mesenchymal stem cells
After cells were labeled, each rat of the 3 test groups (first BM-MSC-, second BM-MSC-, and third BM-MSC-treated groups) was injected with 1 × 106 labeled cells intravenously in the tail vein. One rat from each group was euthanized after 1 week, and liver specimens were sectioned after fixation in neutral buffered formalin prepared from 4% paraformaldehyde; this preparation was assessed by fluorescent microscope for detection of labeled cells. After 1 month, the second and third BM-MSC-treated groups were injected with the second dose of BM-MSCs. One month after the second dose, the third BM-MSC-treated group was injected with the third dose of BM-MSCs. One month after the third dose, all rats were euthanized, and blood samples and liver specimens were collected.

Histopathological examination of liver tissue
For histopathological studies, liver tissues were excised and processed according to routine hematoxylin and eosin stain protocols. Tissues were fixed in 10% neutral buffered formalin, dehydrated in ethanol, clarified in xylene, and embedded in paraffin wax; blocks were then sectioned at 5-μm thickness using a microtome and stained with hematoxylin and eosin .

Statistical analyses
All data are expressed as means and SD. We used analysis of variance to analyze data. P < .05 was considered statistically significant.

Assessment of liver function (liver enzymes)
Levels of ALT and AST started to decrease gradually starting from month 1 after BM-MSC treatment until levels showed the best improvement compared with the DEN-treated group after 3 months (Figure 2).

Hepatic histopathology
In the control group, normal livers showed that the hepatocytes were arranged in cords or plates, radiating from the central vein (Figure 4a). In liver tissues obtained from DEN-treated rats, marked pathological changes were shown, in which most hepatocytes appeared degenerated. Congested dilated blood vessels were also obvious, in addition to severe perivascular inflammation with edema and proliferated bile duct. Multiple focal necrotic areas and marked fibrotic reaction were seen (Figure 4b to 4d). After treatment with BM-MSCs for 1 month, liver tissues were improved to a great extent, with most pathological alterations observed in the DEN-treated group nearly reverted. However, congestion and dilation in a few blood vessels were still detected (Figure 4e). Histopathological examination of liver tissue from the second BM-MSC-treated group showed notable improvement with mild focal inflammatory cell aggregates (Figure 4f). At 3 months after treatment with BM-MSCs, marked improvement in liver tissues could be observed, where the histological picture displayed normal appearance (Figure 4g).

Hepatocellular carcinoma is considered one of the most prevalent primary malignancies in the world. It accounts for more than 90% of primary liver malignant tumors.17 Therapeutic options for HCC include surgical removal, orthotopic liver transplant, ablation, embolization, chemotherapy, radiotherapy, and recently immunotherapy.6 New approaches are being brought to light, including stem cell transplant.18

In 1970, Friedenstein and associates described guinea pig BM-derived cells and called them “fibroblast colony-forming units,”19 which were later found to be multipotent MSCs.20 Many experimental and clinical studies have revealed that these cells respond to damage and migrate toward injured microenvironments and participate in wound healing or tissue regeneration.21 In the present study, we evaluated the tumor suppressive effects of BM-MSCs in an experimental HCC murine model.

Cytokines produced by immune cells play an important role in HCC.22 These local inflammatory mediators have systemic effects.23 Understanding cytokine profiles can explain the mechanisms of treatment options. Cytokine profiles in cases of HCC show an increasing or decreasing pattern.

Survival studies have revealed that high levels of IL-2 are associated with unfavorable prognosis. Our results showed that BM-MSCs transplant in an HCC model could significantly decrease IL-2 levels after 2 and 3 injections. This finding agrees with the findings of Djouad and colleagues who observed decreased levels of IL-2 in murine model of HCC.24

Interleukin 10 is produced by various cell types, including the liver.25 It has an important property, which is its anti-inflammatory action.26 The intensive search for immunosuppressant factors secreted by MSCs have identified multiple factors, including IL-10.27,28 Our data revealed significantly increased levels of IL-10 after transplant of BM-MSCs. This could strengthen our point of view, as increased levels will decrease the inflammatory stress in the microenvironment of treated livers.

Another critical component of the inflammatory microenvironment of HCC is TNF-α. It can be secreted by tumor-associated macrophages, fibroblasts, and even malignant cells per se in HCC tissues.29 Interferon γ is known to be an antiviral agent with potent antitumor effects.30 It has been found that elevated IFN-γ levels represent a characteristic feature of HCC.31 Both TNF-α and IFN-γ can synergistically induce B7-H1 expression, a cell surface protein normally found on immune cells that is overexpressed in many tumors, including HCC.32,33 In our study, we found decreased levels of both TNF-α and IFN-γ after BM-MSCs transplant, indicating regression of the tumor.

With regard to serum levels of ALT and AST, significant decreases of these liver enzyme levels were observed after treatment with BM-MSCs, indicating the ameliorative effects on HCC and on liver function in the treated groups. This finding agrees with the finding from a study by Abdel Aziz and colleagues.34

The results of our study revealed the capacity of BM-MSCs to improve the pathological changes in liver with minimal residual tumor pathology. This finding agrees with Saad El-Din and colleagues.35 This could be explained by the down-regulation of transforming growth factor β signaling, which is shown with MSCs injection.35

Our work also showed an improvement in fibrotic changes and restoration of normal liver architecture after treatment with BM-MSCs. El Baz and associates9 reported similar results when they transplanted MSCs into a cirrhotic liver. Several mechanisms may participate in this effect. The production of matrix metalloproteinase, an enzyme capable of degrading the extracellular matrix, by MSCs is 1 of these mechanisms.36 Mesenchymal stem cells are also able to produce hepatocyte growth factor, which can promote the trans-differentiation of MSCs into parenchymal hepatocyte37 and suppress hepatic stellate cells, which play a main role in hepatic fibrosis.9

Our findings demonstrated that BM-MSCs have tumor suppressive effects in chemically induced hepatocar­cinogenesis. In general, BM-MSC infusion significantly enhanced hepatic regeneration and has therapeutic effects that were shown by the reduction in immunopathology. In addition, BM-MSC infusion could generate new hepatocytes to improve the function of residual hepatocytes. Although there are still many unanswered questions related to the use of stem cell therapy, it is recommended to study autolo­gous MSC transplantation as a curative or supportive therapy for liver disorders, including malignancy. 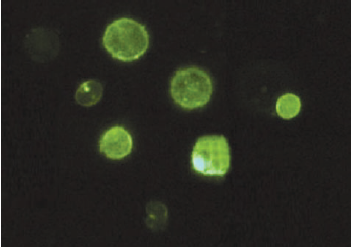 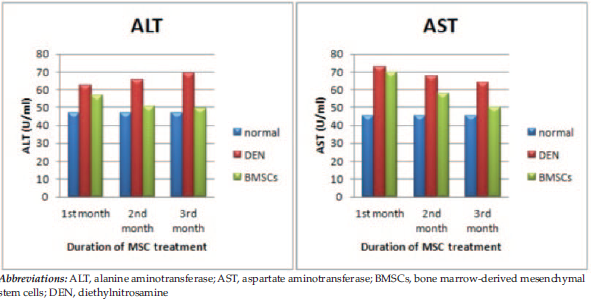 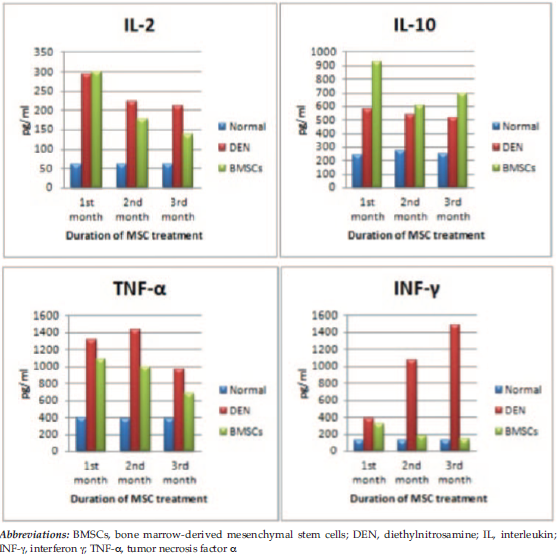 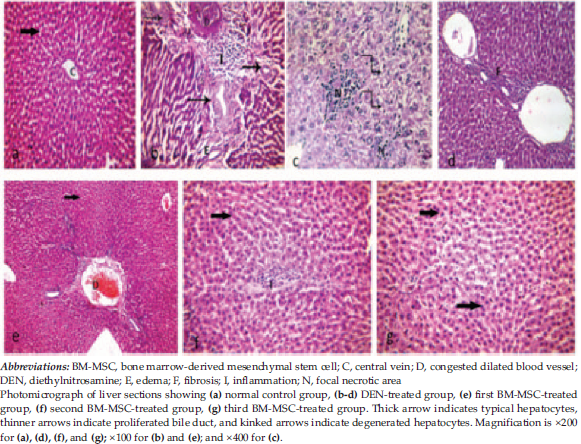 Figure 4. Histopathological Images of Rat Liver Tissues With Hepatocellular Carcinoma Before and After Treatment With Bone Marrow-Derived Mesenchymal Stem Cells