Objectives: The portal vein variation type significantly affects the outcome of transplant surgery, hepatectomies, and interventional radiological procedures. To reveal variation types, especially rare types, we used high-technology multidetector computed tomography.
Materials and Methods: We evaluated multiphase abdominal multidetector computed tomography scans of 278 consecutive patients. Multidetector computed tomography scans were processed for axial, coronal, and axial-oblique multiplane reformation and for maximum intensity projection. Variations of the main portal vein and right portal vein were simulta­neously analyzed by 2 radiologists. Prevalence of each variation and differences in sexes were investigated.
Results: Variant anatomy was detected in 29.5% of main portal veins and 20.9% of right portal veins. There was no statistical difference between sexes. Type 3 was reported as the most frequent variant of main portal vein, whereas type 4 was the most frequent variant of right portal vein. Some miscellaneous types were also ascertained.
Conclusions: Different types of anatomic variations may adversely affect the course of surgery and interventional radiological procedures. Fortunately, radiologists can now discover the critical types by using the new generation multidetector computed tomography with 3-dimensional reconstruction techniques. This information should be included in the radiology reports of patients who are scheduled for major surgery.

The awareness of variations in portal vein branch pattern is gaining greater importance with increases in the numbers of transplant surgeries, hepatectomies, and interventional radiological procedures such as transjugular intrahepatic portosystemic shunts and portal vein embolizations.1 Some types of variation may create difficulty for living donor right lobectomy.2 Also, interventional radiological procedures may be complicated by some of these variations.1,3

Multidetector computed tomography (MDCT) as a noninvasive imaging modality has rapidly developed during the past 2 decades. Higher speed imaging with better resolution and less need for contrast media have raised the value of MDCT, especially for detailed evaluation before major surgery. Three-dimensional imaging techniques, such as maximum intensity projection (MIP), multiplanar reconstruction (MPR), and volume rendering, improve the detailed imaging of venous structures with MDCT.4 We aimed to reveal variation types, both common and uncommon, and to discuss probable adversities according to type of surgery or percutaneous interventions.

We retrospectively reviewed 385 consecutive multiphase abdominal MDCT scans performed from March 2016 through June 2020. We excluded any patients with portal vein thrombosis, inadequate filling of vessels due to technical insufficiencies, postoperative major changes, and central tumors that obscured the vessels. We included 278 patients (147 male patients, 131 female patients, ages between 17 and 91 years) for whom the MDCT results clearly identified the portal vessels.

This study was approved by the Gaziosmanpasa Educational and Research Hospital local ethics committee (No. 107; June 23, 2020). Written informed consent was obtained from all patients. We only included patients for whom the MDCT scans were performed for indications other than transplant purposes, and variant anatomy was investigated in this study group.

All CT scans were obtained by the standard protocol of our hospital with a 128-slice MDCT scanner (Optima; GE Healthcare). The scanned area was from the dome of the diaphragm to the symphysis pubis, and scans were performed during a single breath-hold. For this procedure, 80 mL of contrast material was injected through an 18- to 20-gauge antecubital intravenous cannula at a rate of 4 mL/s. Scans were acquired in hepatic arterial, portal venous, and hepatic venous phases. Portal phase was obtained with a scan delay of 70 seconds after injection of contrast medium. The raw imaging data obtained from MDCT were processed on a commercially available workstation for axial, coronal, and axial-oblique MPR and MIP. All images were simultaneously evaluated by 2 radiologists (AHB, SND).

We first analyzed the main portal vein (MPV) branch pattern and classified the various images as types 1, 2, and 3. Normal MPV branch pattern (type 1) was identified by the bifurcation into the right portal vein (RPV) and left portal vein (LPV), followed by the RPV second division to become the right anterior portal vein (RAPV) and the right posterior portal vein (RPPV). Any deviation from this pattern was classified as variant anatomy. Trifurcation of the MPV into the LPV, RAPV, and RPPV was categorized as type 2, whereas separate origin of the RPPV from the MPV with emergence of the LPV and RAPV from a common trunk was categorized as type 3. We differentiated the type 3 from the type 2 variants according to shape of the gap between the RAPV and the RPPV. It was reported by Hwang and colleagues that if the gap is triangular, the anatomy is classified as type 2; if it is rectangular, then it is type 3.5

Right portal vein branch pattern was also investigated. If the vein of segment 7 separately originates from RPV, this variant is categorized as type 4, whereas it is categorized as type 5 if the segment 6 vein has separate origin from the RPV. Other miscellaneous variations of the RPV were also reported, eg, RPV trifurcation and quadrification, separate origin of segment 6 and 7 veins, origin of segment 8 vein from LPV, and superior and inferior branch pattern instead of RAPV and RPPV.

Statistical analyses
Statistical analyses were performed with the SPSS software (version 12.0 for Windows). The chi-square test was used for evaluation of the prevalence of portal vein variations in male and female patients. P < .05 was accepted as statistically significant.

Right portal vein variation was also analyzed. Variant anatomy was detected in 41 of 196 patients with conventional branched MPV. Separate origin of segment 7 vein from RPV (type 4) and separate origin of segment 6 vein from RPV (type 5) was observed in 16 and 8 of the patients, respectively (5.7% and 2.9%). Examples of type 4 and type 5 are illustrated in Figure 2. Right portal vein trifurcation was the most frequent miscellaneous variation (Figure 3). Very rare examples from our study group are illustrated in Figure 4 and Figure 5. Variant types and prevalence are listed in Table 1.

In contrast with other studies,1,4,12 we found type 3 portal vein variation as the most frequent variation, which was also reported by Atasoy and colleagues.11 We suggest that this frequency may be associated with the advantages of thin axial slice and MPR images of MDCT. The short common trunk of RAPV and LPV may be misdiagnosed as trifurcation (type 2), as shown previously.11 We observed a type 3 variation with a short common trunk (Figure 1c, curved arrow) that could easily be missed with less sophisticated techniques and tools. We note that axial-oblique and coronal-oblique thin-slice MPR and MIP images demonstrate the best anatomic details, and these methods play a critical role to properly differentiate the variation types.11

We also investigated the RPV ramification variations that should be identified before major surgical procedures proceed. We found 41 variant RPV branch types in contrast to 155 of the conventional RPV branch type, for a total of 196 type 1 MPV (variation rate, 20.9%). This number is higher than reported in all other reported studies, which have ranged between 3.9% and 16.8%.4,11 We suggest that our high prevalence versus all other reports may be the result of our use of the new generation of MDCT technology. As detection number increases in MDCT technology, high-speed imaging with thin-slice thickness may provide better resolution as a result of the higher quality of 3-dimensional reconstructions, which in turn may facilitate more detailed evaluations. Among RPV variations, we most frequently encountered type 4 (5.7%), type 5 (2.9%), and RPV trifurcation (2.5%). Superior and inferior ramifications instead of conventional branching as RAPV and RPPV were also reported in a study from 2017 as the most common miscellaneous variation (3%).3 We detected this type of variation in 3 of 278 patients (1%).

We focused on advantages and disadvantages of variation types according to the nature of the desired surgical procedures and radiological interventions. In transplant surgery, a living donor with trifurcated type MPV (type 2) creates complications associated with clamping. In type 3 anatomy, this is even more complicated because type 3 necessitates clamping of both RAPV and RPPV.11,13 If 2 branches are closely originating, then the donor RPPV is anastomosed to the recipient RPV, and the donor RAPV is anastomosed to the recipient LPV. Such Y-grafts enable simultaneous reperfusion through both donor portal branches; however, if these originated from each other more distally, then an extension graft is necessary, which may cause reperfusion delay between branches and therefore graft occlusion may arise.14 In case of segmental transplant, type 3 anatomy creates advantages for RPPV anastomosis.11

Major hepatic resection, such as extended right and extended left hepatectomies, may be the only choice to ensure a higher survival rate for patients. Hepatobiliary surgeons prefer at least 25% future liver remnant for healthy liver parenchyma and at least 40% future liver remnant for diseased (eg, cirrhotic) parenchyma.1 In such situations, portal vein embolization is a special procedure that should be performed before major surgery if the future liver remnant is inadequate. Embolic occlusion of portal vein branches causes shrinkage of involved parenchyma and hypertrophy of the unembolized rest parenchyma. In cases with type 3 anatomy, RPPV catheterization could be more difficult. Other branch anomalies such as RPV trifurcation or quadrification could result in unstable catheter location and hence nontarget embolization.15-17 Uncommon variations such as separate origin of segment 6 and segment 7 should be known before the embolization. Otherwise, missing these segment branches would result in inadequate hypertrophy due to insufficient embo­lization and so provide insufficient hypertrophy. Segment 4 portal vein should be embolized in extended right or left hepatectomies to provide maximum parenchymal hypertrophy; it may be originated from RPV instead of usually from LPV, so the adjacent areas in the surgical field should be searched if it is not found in its usual location.1 We did not detect any segment 4 vein that originated from RPV. Another important point is awareness of type 4 and type 5 variations before performing a left trisegmentectomy. Otherwise, surgeons may inadvertently leave a single viable liver segment as the entire remnant liver, which may potentially result in liver failure and death.12 In case of sufficient future liver remnant, for extended liver resection performed without portal vein embolization, both RAPV and RPPV should be ligated; if not, the ligation of RAPV may cause serious hemorrhage from RPPV.1

Transhepatic portosystemic shunt is a special procedure and a well-known treatment for variceal hemorrhage and intractable ascites caused by portal hypertension complication.12 Most commonly, transhepatic portosystemic shunt creation involves transhepatic puncture of the RPV branch from the right hepatic vein approach.3 Therefore, awareness of RPV variations is important. Type 1 anatomy is most preferable because of the appropriate caliber of RPV and relatively easy puncture of RPV through the right hepatic vein. An obtuse shunt angle between RPV and right hepatic vein may facilitate advan­cement of a device such as a catheter, sheath, or stent through right jugular vein access. Also, an obtuse angle provides good shunt function.3 Types 4 and 5 are the other 2 desirable anatomies because of similar obtuse angle formation. The trunk that is punctured in either variation also has sizeable caliber, similar to type 1. However, with type 2 and type 3, because of the puncture of either RAPV or RPPV, an acute sharp angle develops between hepatic and portal veins. Because of the acute sharp shunt angle and the relatively small size of segmental branches punctured, device advancement through the intrahepatic tract becomes more complicated.3

We did not evaluate the segmental portal vein variation that traverses the interlobar boundary, and this is the main limitation of our study. This may be reevaluated in the future with a larger study group. We suggest that valuable findings are achievable with high-technology MDCT.

Portal vein variants are frequent and relatively easy to recognize with the increased quality of 3-dimensional reconstructions. Axial-oblique images with MPR and MIP reformations are particularly important in differentiating these variations. In case of complex surgical or interventional procedures, these variations should be described precisely in the radiological report to avoid poor results. 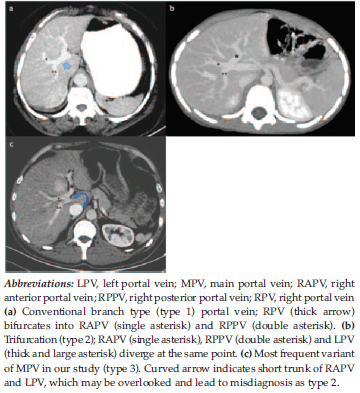 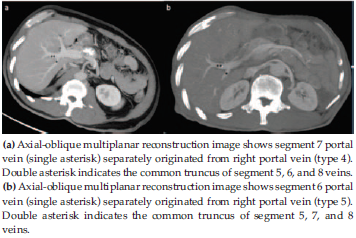 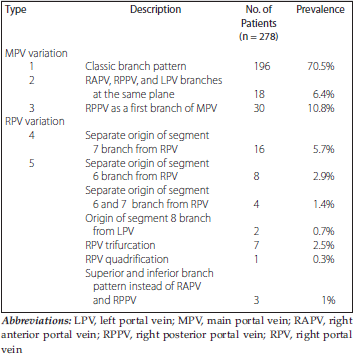 Table 1. Pattern and Prevalence of Variations of Both Main and Right Portal Vein 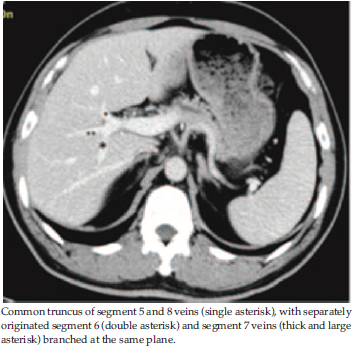 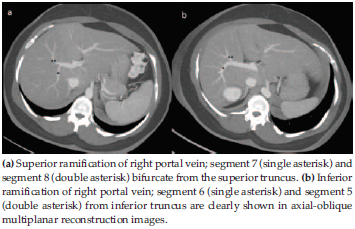 Figure 4. One of the Uncommon Variations of Right Portal Vein Ramification 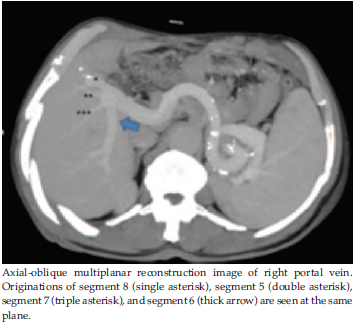