The dramatic organ shortage combined with the growing list of potential recipients has led to unacceptably long wait times for kidney transplant in the United States. For example, approximately 4000 patients die on the kidney wait list annually, and an additional 4000 patients are removed because they develop disqualifying medical conditions while waiting for a potentially life-prolonging transplant.1 Consequently, a number of initiatives have been aimed at not only liberalizing donor selection criteria but also improving utilization of “marginal” donor organs and reducing the discard rate of kidneys recovered with the intent of transplant. As a result, the discard of an allograft due to surgical damage or anatomic anomalies is an unacceptable waste of a valuable resource. Therefore, in the case of surgical damage, repair should be attempted if possible; in the case of aberrant anatomy, a thorough assessment of the risk-benefit of using the organ in an appropriately selected recipient should be made. We herein report the unusual case of a patient who received a renal allograft with 6 arteries. To the best of our knowledge, this is the second similar case ever reported.2

We describe the case of a 30-year-old Asian female patient with end-stage renal disease secondary to membranous glomerulonephritis who had been on hemodialysis for almost 4 years before receiving a deceased donor kidney transplant. At the time of transplant, she weighed 92 pounds with a body mass index of 16.4 kg/m2. The donor was a 35-year-old White male with no significant past medical history and a weight of 189 pounds, body mass index of 26 kg/m2, and Kidney Donor Profile Index of 52%. The brain-dead donor died in a motor vehicle accident; cytomegalovirus (CMV) antibody profile was negative; initial, peak, and terminal serum creatinine values were 1.1, 1.5, and 1.3 mg/dL, respectively. The recipient had a calculated panel reactive antibody level of 0%, was a 1-2-1 human leukocyte antigen mismatch with the donor, and was CMV antibody positive.

The donor right kidney was offered to our center from a different organ procurement organization after being refused by multiple centers because it was described as having 5 renal arteries and 4 veins. Given the high quality of the donor and the excellent overall match (young age of both donor and recipient, male donor organ to female recipient, donor almost twice the size of the recipient, favorable vascular and abdominal anatomy of the recipient, and negative crossmatch testing), we decided to import the kidney in order to examine it closely and determine whether the vascular pedicle could be safely reconstructed and the organ successfully transplanted.

Inspection during the “back bench” preparation revealed normal appearing kidney size and parenchyma, no vascular disease, and the identification of actually 3 veins and 6 arteries, 2 of which (arteries 1 and 2) were directed toward the lower pole, 3 (arteries 3 through 5) directed toward the hilum, and the final artery (artery 6) directed toward the upper pole ( Figure 1). Because the kidney was a right kidney, it had been recovered with preservation of the inferior vena cava, which contained all 3 veins.

According to Hegedus’ classification, variations in the renal artery can be categorized into 2 groups: “early division arteries” (EDA) and “extra renal arteries” (ERA).3 The division of the main renal artery into 2 or more segmental branches more proximal than the renal hilum is referred to as an EDA (also referred to as “pre-hilar segmental branching”). The presence of an artery, other than, and anatomically distinct from, the main renal artery but supplying the same kidney, is defined as an ERA. However, based on the region of the kidney that they perfuse, ERAs can also be categorized as hilar (or accessory, when they enter the kidney at the hilum in parallel with the main renal artery) and polar (or aberrant, when they enter the kidney directly from the capsule outside the hilum) arteries. In our case, the vascular anatomy consisted of 6 separate identifiable arteries, 2 of which were hilar (indicated by purple arrows in Figure 1 ), whereas the other 4 were polar (indicated by yellow arrows in Figure 1 ).

We were able to preserve all 6 arteries on 2 separate aortic patches that were implanted separately end to side onto the right external iliac artery of the recipient, which was quite long and healthy. All 3 veins were preserved by constructing a vena cava conduit for the venous outflow, which was anastomosed end to side to the recipient’s right external iliac vein as a single anastomosis. Total anastomosis time was 40 minutes, overall duration of the procedure was 2.5 hours, and cold ischemia time was 20 hours. The organ was never placed on pump preservation before implantation because of the complex vascular anatomy.

The patient tolerated the procedure well, did well postoperatively, experienced immediate graft function, and was discharged on postoperative day 5. The patient received induction immunosuppression with rabbit antithymocyte globulin and maintenance therapy with tacrolimus, mycophenolate sodium, and long-term low-dose prednisone. Postoperative duplex ultrasonography showed normal perfusion of the whole allograft, as shown by the power Doppler image (Figure 2), despite that only 4 arteries could be visualized. No specific anticoagulation therapy other than low-dose aspirin was adminis­tered perioperatively. A baseline (reperfusion) biopsy was not performed due to the young age of the donor, but a 1-month protocol biopsy showed sclerosis in 2 of 13 glomeruli (15%) and mild interstitial fibrosis/tubular atrophy.

The incidence of variants in the vascular anatomy of the kidney is reported to range from 20% to 50% in anatomic and clinical series.3 In a recent study from Turkey that aimed to evaluate renal artery variations in living kidney donors using computed tomographic angiography, it was noted that 1738 of 2144 (81.1%) living donor candidates presented with a single artery, 369 (17.2%) had 2 arteries, 35 (1.6%) had 3 arteries, and only 2 individuals (0.1%) had 4 arteries.4 These findings demonstrate that, although the odds for a renal allograft to have 6 arteries are extremely low, transplant surgeons should be prepared to deal with supernumerary arteries (SNA) despite perceptions that the use of these grafts may adversely influence outcomes.

The literature remains unclear on this matter. A Dutch meta-analysis published in 2016 showed that, although SNA grafts were associated with more complications than kidney grafts with single arteries, the groups did not differ in terms of 5-year graft survival rates (81.4% vs 81.6%) and 1- and 5-year patient survival rates (95.4% and 89.6% in the SNA group vs 95.4% and 87.0% in single artery group, respectively).5 Of note, in this meta-analysis, the authors could not find any randomized controlled trial to specifically address this issue. Interestingly, a recent study from Italy retrospectively compared short-term and long-term outcomes of elderly patients who received allografts with or without vascular abnormalities and found no differences in terms of physical activity performance, surgical complications, and 5-year survival rates; patients were pair-matched by age, length of time on dialysis, comorbidity, and donor age.6

Our experience shows that even kidneys with extremely challenging anatomy should be considered for transplant, provided that the conditions for a successful outcome are present. Fortunately, our recipient was slim and had no atherosclerosis in the iliac axis, so she was technically an ideal candidate for a kidney with multiple arteries. Her match with the donor was favorable not only from an immunologic perspective but also because the donor was male, young, had no significant past medical history, and, very importantly, was 90 pounds heavier. Accordingly, the number of nephrons and functioning mass provided by this kidney were more than satisfactory for the chosen recipient, even if 1 or more arteries thrombosed. Moreover, if we consider that the sacrifice of a 2-mm accessory renal artery leads to a parenchymal loss of less than 8%,7 then we can speculate that this kidney would have even tolerated sacrificing 1 or 2 of the 6 arteries without negatively affecting overall renal function. As mentioned, postoperative duplex ultrasonography failed to identify 2 of the 6 arteries. Although this could be interpreted as artefact or determined by the position of the vessels, the optimal perfusion observed throughout the parenchyma may corroborate the above hypothesis. When allograft anatomy is considered, it should be emphasized that the 6 arteries were well distributed onto 2 separate aortic patches that could be implanted without difficulty on the proximal and distal segment of the recipient’s external iliac artery. With the use of aortic patches incorporating multiple renal arteries, warm ischemia time was relatively short and risks of arterial stenosis or thrombosis were minimized. Having a donor right kidney likewise simplified the venous reconstruction by using a vena cava conduit to preserve the entire venous outflow.

In summary, the presence of multiple renal vessels should not be a contraindication to proceeding with successful kidney transplantation, provided that careful planning of the vascular reconstruction is combined with appropriate recipient selection. Ultimately, the goal of maximizing the utilization of deceased donor kidneys can be realized without compromising the expected success of kidney transplantation.

From the 1Department of Radiology, Wake Forest Baptist Medical Center, the 2Wake Forest School of Medicine, and the 3Department of Surgery, Wake Forest Baptist Medical Center, Winston Salem and Wake Forest School of Medicine, Winston Salem, North Carolina, USA
Acknowledgements: The authors have not received any funding or grants in support of the presented research or for the preparation of this work and have no declarations of potential conflicts of interest.
Author contributions: BL Holbert was responsible for imaging studies and iconography and wrote the part of the manuscript relative to the imaging; JM Aziz performed the literature pertinent to the case and produced the figures; DI Harriman, VR Gurram, and K Gurung participated in bench surgery and transplant and contributed to patient care throughout follow-up; AC Farney, CC Jay, J Rogers, and RJ Stratta provided input on technical and anatomic aspects of the case and contributed to patient care throughout follow-up; and G Orlando conceived and implemented the case study, was the primary surgeon for the case, was responsible for its primary undertaking, contributed to patient care throughout follow-up, and wrote the manuscript. All authors approved the final version.
Corresponding author: Giuseppe Orlando, Abdominal Organ Transplant Program, Department of Surgery, Wake Forest Baptist Medical Center, Wake Forest University School of Medicine, Medical Center Boulevard, Winston Salem, NC, USA
E-mail: gorlando@wakehealth.edu 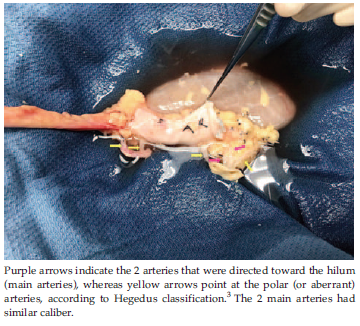 Figure 1. Appearance of Renal Allograft at the Bench 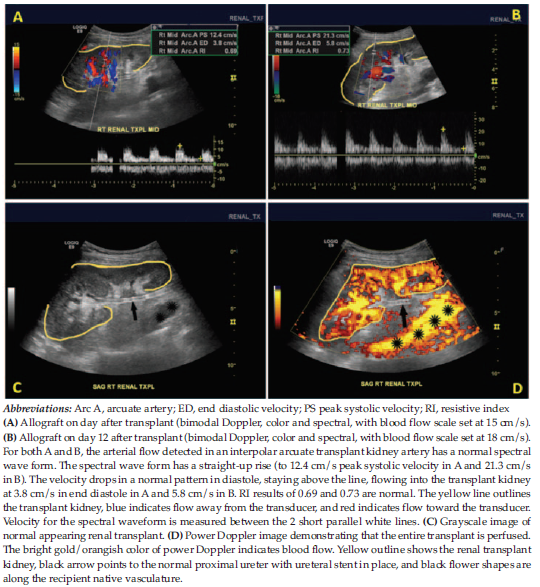