Ependymomas are the most common intramedullary spinal tumors in adults and constitute around 20% of all spinal tumors in adults. There are 3 subgroups of ependymomas according to World Health Organization classification: subependymoma or myxopapillary (grade 1), ependymoma (grade 2), and anaplastic (grade 3). Therapy for patients is aimed at safe and total surgical removal and, in selected cases, postoperative radiotherapy. Bleeding from a spinal ependymoma, with subsequent urgent surgery, is extremely rare. Here, we present a case of a renal transplant patient who had a cervical ependymoma. Although a considerable volume of peritumoral blood was observed during surgery, the patient had no neurologic deficits and no signs of deterioration.

Ependymomas can be found as both intracranial and spinal tumors. Intracranial tumors have supra­tentorial or infratentorial localization, and they originate from the ependymal cells within the ventricles. Spinal tumors originate from the ependymal cells in the central canal of the medulla spinalis. Spinal epen­dymomas are intramedullary, and their frequency is one-third of that for intracranial ependymomas. More than one-half of these tumors are localized in the conus medullaris or filum terminale.1,2 Treatment of patients primarily consists of surgery with the aim of total removal. Radiotherapy has not gained a distinct role in treatment.

Neurologic examination was normal. The intravenous contrast cervical magnetic resonance image revealed an intramedullary mass expanding the spinal cord at the C2-6 levels. The lesion measured 5.6 × 1.5 × 1.6 cm, with the solid portion having a diameter of 2.1 × 1.5 cm. The remaining portion of the lesion, in both the cranial and caudal directions, showed intensity compatible with edema (Figure 1). When enhanced, the mass had a linear pattern in the cranial and anterior areas. Cranial, thoracal, and lumbar magnetic resonance images were normal.

In September 2017, the patient underwent surgery. With the patient in a prone position under neuromonitoring, C3 and C4 laminectomies were performed. After application of a midline myelotomy, 10 cm3 of blood protruded spontaneously. After the blood was completely cleared from the surgical site, the solid portion of the tumor was totally removed. The patient had slight central cord syndrome postoperatively, which rapidly improved. Histologic examination of the tissue revealed a tumor consisting of finger-like projections lined by single and multiple layers of cuboidal cells. Perivascular pseudorosettes and true ependymal rosettes were also seen. No mitotic activity was observed. Microvascular pro­liferation and necrosis were not present in the tumoral tissue. The tumor exhibited diffuse positivity for glial fibrillary acidic protein, and epithelial membrane antigen immunoreactivity was seen mainly in the luminal surfaces of the ependymal rosettes. There were also small dots showing possible positivity for epithelial membrane antigen in some tumor cells. Ki-67 proliferation index was low. The histopathologic diagnosis was ependymoma (Figure 2).

Ependymomas are the most frequent intramedullary spinal tumors in adults. For all patients with ependymomas, the frequency has been reported to be 21.6% in those who are 0 to 19 years old.3 Ependymomas arise from ependymal cells of the central canal; however, new research has revealed that these tumors have similar pathology to radial glial stem cells that have undergone malignant transformation.4

Ependymomas are often seen during the fifth decade. Lower spine, conus medullaris, and filum terminale are the segments of predilection. They are slow-growing tumors, and symptoms are generally of long duration. Lower back pain, gait, and sensorial disturbances are the main symptoms. Paraparesis and sphincter dysfunction are seen in about 1/4 of cases.

Bleeding from a spinal ependymoma and consequent acute neurologic deterioration requiring urgent surgery are rare. Terao and associates, in a literature search, found only 15 such cases along with their own.7 Their literature review of similar cases revealed that tumors were mostly located in the lumbar segments, and no upper cervical location was noted. There was only 1 patient with purely intramedullary tumor, and only 1 patient had an intra-extramedullary tumor. In 3 cases, no description about the compartment of the tumor was given. Seven patients required urgent surgery due to their neurologic condition.7

Tonogai and associates8 reported a case of a myxopapillary ependymoma of the filum terminale that caused acute-onset cauda equina syndrome with accompanying hemorrhage. The authors detected tumor cells within the hemorrhage and therefore irradiated the patient to prevent recurrence.

The results of a study by Nakamura and coworkers9 indicated that the surgical margin obtained at initial surgery and the extent and amount of postoperative radiotherapy can be crucial factors determining the prognosis of patients with myxo­papillary ependymoma. The authors have also pointed out that cerebral spinal fluid dissemination can occur once the tumor capsule is violated, before or during surgery.

The case presented here is interesting because neither serious neurologic deficits nor acute deterioration was observed, although a great volume of peritumoral blood was present. The second point of interest is the location of the tumor in the upper cervical segments. Review of patients with hemorrhagic spinal ependymomas requiring urgent surgery for a progressing neurologic condition showed that none of these tumors had an upper cervical location. The patient’s daily use of 100 mg of aspirin since renal transplant may have caused gradual microbleeding around the tumor without major complaints. 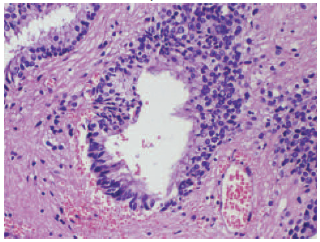