Objectives: This study aimed to assess portal and hepatic venous volumes as related to the planning of complex liver resections and segmental liver transplant.
Materials and Methods: We analyzed 3-dimensional computed tomography of portal and hepatic vein territorial maps of 140 potential living related liver donors. Portal and hepatic vein maps were simulated both separately and in overlap (cross-mapping) to calculate inflow and outflow volumes.
Results: In total liver volume, the right hemiliver was always dominant (mean 64.7 ± 4.8%) and the right medial sector (mean 36.4 ± 6.8%) and segment 8 (mean 19.1 ± 4.3%) accounted for the largest volumes, whereas the left medial sector (mean 13.5 ± 3.1%) and segment 4A (mean 5.8 ± 1.8%) accounted for the smallest volumes (with exclusion of caudate lobe). The right hepatic vein was dominant for both right hemiliver and right lateral sector and had the largest drainage volume in total liver volume (mean 40.0 ± 11.2%). The left hepatic vein was dominant for both left hemiliver and left lateral sector but had the smallest drainage volume for total liver volume (mean 21.3 ± 5.0%). The middle hepatic vein drained 50.2 ± 12.5% of the right medial sector and 75.8 ± 15.4% of the left medial sector. In 67 cases, an accessory vein (inferior hepatic vein) drained 16.5 ± 13.2% of the right hemiliver, 31.4 ± 25.1% of the right lateral sector, 26.6 ± 23.2% of segment 7, and 37.4 ± 31.3% of segment 6.
Conclusions: The portal and hepatic vein territorial anatomy was characterized by extensive individual variability. An extremely small remnant volume (<25% of total liver volume) precluded a minority of virtual extended left and a majority of extended right hepatectomies. Left trisectionectomy was associated with risky drainage from the middle hepatic vein, extensive segment 6 remnant congestion volume in 8% of cases, and right lateral sector-favorable inferior hepatic vein large drainage pattern in 13% of livers.

We performed a comprehensive systematic analysis of both individual and overlapping PV and HV maps to preoperatively identify surgically relevant volume dominance patterns by means of individualized 3-dimensional (3D) inflow and outflow crossmatch volumes. High-risk virtual congestion volumes were particularly addressed and outlined from scientific anatomic and practical surgical points of view to assist in the planning of extensive and complex liver resections.

Per the Couinaud classification8 modified by Kumon,15 the caudate lobe consisted of a left (segment I or Spiegel lobe) and a right (segment IX or caudal process) portion and the paracaval section (or pars intermedia).

Statistical analyses
We calculated volume as mean ± SD and percentages. The chi-square test was used for dichotomous variables. The Wilcoxon matched pairs test was used to compare 2 variables lacking normal distribution. The Mann-Whitney U was used to test the significance of differences between 2 independent samples and differences in 2 groups.P< .05 was considered significant. We used Statistica 7.0 (Statsoft Inc) for statistical analysis.

This study was approved by the institutional review board and the ethics committee of the Department of General, Visceral and Transplantation Surgery, University Hospital Essen (Essen,Germany).

Dominance of right lateral sector
Segments 7 and 6 showed nearly identical mean volumes. Segment 7 had the greatest volume variability with up to 94% in the RL. Segment 7 was dominant in 81 livers (58%) and segment 6 in 59 livers (42%).

Dominance of right medial sector
Segment 8 had a slightly larger mean volume than segment 5 but a smaller volume variability. Segment 5 was dominant in 1 liver in 89% of the RM sector. Segment 8 was dominant in 92 livers (66%) and segment 5 in 48 livers (34%).

Dominance of left lateral sector
Segment 3 had a larger mean volume and greater volume variability than segment 2. Segment 3 was dominant in 101 livers (72%) and segment 2 in 39 livers (28%).

Overlap of portal vein and hepatic vein maps with inferior hepatic vein absent in 73 livers
Detailed delineations of the volume calculations are shown in Figure 5 and Figure 6.

Drainage of liver sectors
When we looked at mean values, RHV significantly dominated in RL sector and was marginally dominant in RM sector drainage (P< .0001 andP= .231, Mann-Whitney U test). We found that RHV had the greatest volume variability in both sectors and drained in 16 livers (22%). In individual instances, MHV drained up to 42% of the RL sector.

The RHV dominated drainage of the RL sector in 49 livers (73%), of IHV in 17 livers (25%), and of MHV in 1 liver (with 35%). The RHV and IHV shared the greatest volume variability in RL. The MHV had a dominant drainage volume of the RM sector in 42 livers (63%) cases and of RHV in 25 livers (37%). The RHV revealed the greatest volume variability in the RM sector. The IHV drainage territory in RM was detectable in 29 livers (43%) (up to 25% RM) with no evidence of dominance in any case.

Couinaud’s 1-2-8 scheme represents an “ideal” anatomic model.22 The 1-2-20 ramification scheme recently proposed by Fasel5 described up to 20 peripheral PV branches that could not be clearly assigned to either sectorial (second-order) or segmental (third-order) levels. Fasel and colleagues stated that inherent individual multiramification, rather than predetermined hierarchical binary branching pattern, might provide a reasonable explanation for the “non-sectoriality/nonsegmentality” of their alternative “multi-territorial PV model.”23 Our previous studies described the virtual backward shifting of branching hierarchy with random bi-/trifurcation constellations and duplication of sectorial or segmental branches.24,25

The primary aim was to identify “dominance” patterns in PV and HV maps based on the PV and HV branching anatomy encountered in healthy human livers. We found an extensive variability in PV and HV territorial anatomy under physiologic conditions. These findings also confirmed our previous observations describing considerable differences in HV drainage patterns, especially in the RHH.6 Tumoral (micro)vascular invasion and fibrotic/cirrhotic “remodeling” may further modify locoregional perfusion, leading to compensatory collateralization and parenchymal hypo/hypertrophy.4,26

Our segmental map showed a profile consistent with the Tokyo series,27 with a clear dominance of RHH, RM, and segment 8 volumes in total liver and the greatest volume variability in the RM sector and segment 5. In contrast, the LM sector and segment 4a had the highest volume consistency. Our inflow/outflow simulation showed a dominant RHV drainage in RHH, RL and a dominant LHV drainage in LHH, LL irrespective of the presence of IHV. Consistent with the findings of the Heidelberg series, we identified a dominant LHV drainage of segments 2 and 3 and an MHV dominance in segments 4A/B.28 The drainage dominance in the RM sector shifted between MHV and RHV depending on the presence or absence of an accessory IHV. For total liver, RHV had both the largest volume estimate and the greatest volume variability, whereas LHV had both the smallest volume estimate and the least volume variability.

Although successful liver resections have been reported in the setting of RV/TLV <25% and optimal liver quality, RV/TLV of at least 25% to 30% is usually required to avoid small-for-size syndrome.16 Our virtual right trisectionectomy involved 92% marginally small remnants formed by the LL sector with borderline RV/TLV index of <25%. In comparison, our simulated left trisectionectomy had only 21% small-for-size remnants formed by the RL sector, requiring portal vein embolization for compensatory parenchymal growth to avoid postoperative liver failure.3,17

In the setting of extended MHV-inclusive left hepatectomies (segments 1-4 + part 5/8), favorable IHV drainage of segment 5 can prevent serious local parenchymal congestion associated with the loss of MHV outflow. In contrast to our findings (we observed IHV drainage of segment 5 in 39% of cases), Buhe and colleagues in an autopsy study of 60 livers detected IHV branches draining only segments 6 and 7.18 In our left trisectionectomy simulations with liver remnants formed by RL, IHV had a 25% dominance and a 31% mean drainage volume for RL. Moreover, in 37% of our IHV-containing remnant livers, a favorable dominant (up to 100% volume) IHV drainage of segment 6 was identified. In contrast, in 8% of cases, we estimated a risky large MHV/segment 6 index of >30%, including a maximal 84% drainage of segment 6. In the latter anatomy constellation, the reconstruction of MHV/segment 6 tributaries to provide an optimal outflow should be considered, particularly in cases with marginally small liver remnants.

Inclusion of the MHV with LHH grafts remains the preferred option for adult living donor liver transplant.29 Congestive volumes in LHH are dependent on the highly variable MHV anatomy. In the livers analyzed in our study, 24% showed a risky MHV/LHH index of >40%, suggesting MHV inclusion regardless of graft size. In comparison, the Nakamura and Tsuzuki 9 favorable type I-dominant LHV drainage of segment 4A/B with an LHV/LM index of >50% (allowing to safely forgo MHV drainage in the marginal area of the left graft) was encountered in only 3 (2%) of our livers. 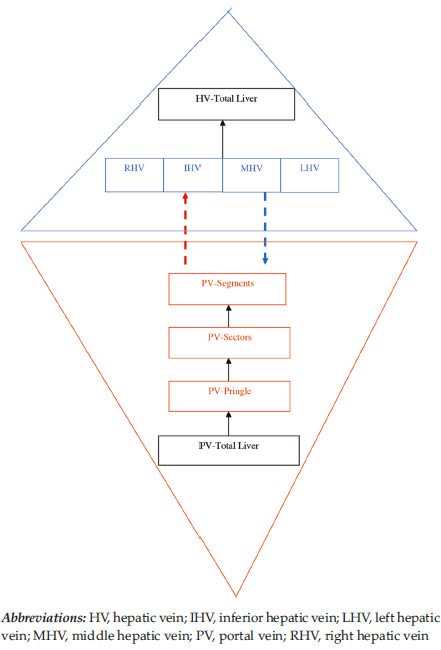 Figure 1. Portal and Hepatic Vein Maps Simulated Separately and in Overlap Allowing for Calculation of Inflow/Outflow Crossmatch Volumes in the Individual Liver Model 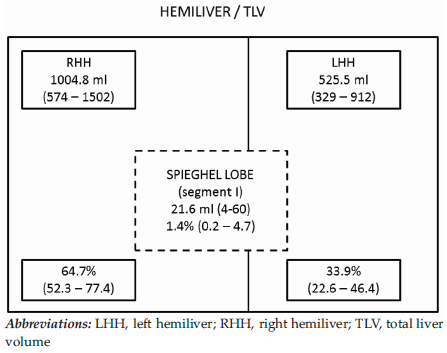 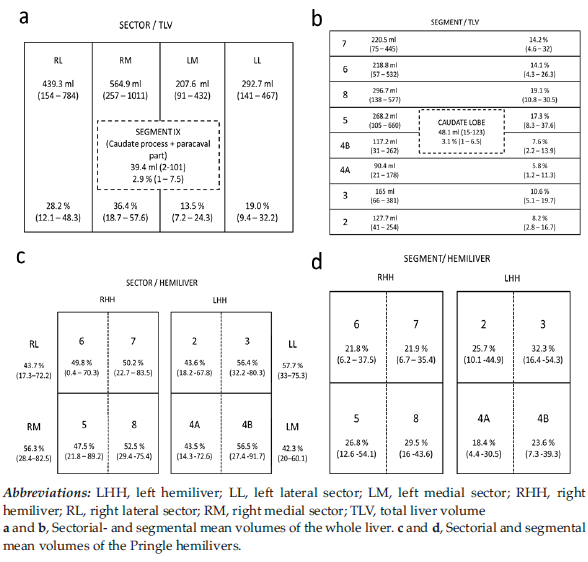 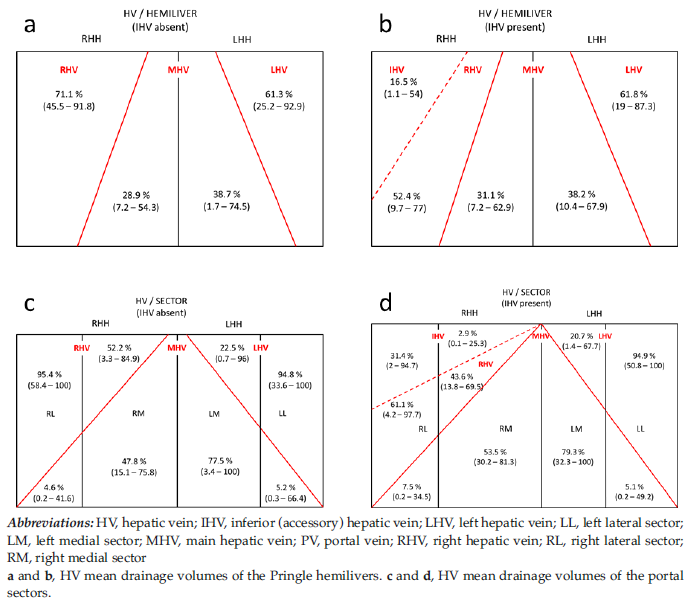