Dyskeratosis congenita (DC) is a rare inherited disorder typified by bone marrow failure and associated with other somatic abnormalities and multisystem disorders. Although the exact prevalence is unknown, due in part to crossover with other telomeropathies, the prevalence of DC is estimated to be about 1 in 1 million.1,2 Like other telomeropathies, the mutation in DC causes premature telomere shortening, leading to premature cell death, senescence, or genomic instability. This, in turn, leads to primary organ dysfunction. Although DC was initially thought to be X-linked, it is now known to be inherited in both an autosomal dominant and autosomal recessive pattern. Autosomal dominant patterns often show disease anticipation, with younger-onset disease in subsequent generations. Overall, about 13 pathogenic mutations account for 70% of the reported cases of DC. Some mutations show additional disease syndromes, such as Hoyeraal-Hreidarsson syndrome, as well as increased risk of pulmonary fibrosis.1,3,4

The diagnostic criteria for DC have continued to evolve as more has become known about the biology of the disease. Traditionally, the diagnosis was only assigned to patients with the classic mucocutaneous symptoms, with or without bone marrow failure. However, DC has a wide range of clinical manifestations, some of which do not appear until adulthood. As such, genetic testing and telomere length analysis are now commonly used to aid in the diagnosis.5,6

The management of DC is mostly symptomatic and directed at the involved organ system. The name “dyskeratosis congenita” reflects the triad of abnor­mal skin dyspigmentation, nail dystrophy, and oral leukoplakia characteristic of the disease.7 However, DC is a multisystem disease with neurologic, ophthalmic, dental, pulmonary, gastrointestinal, genitourinary, endocrine, and skeletal involvement. In addition to the mucocutaneous symptoms, up to 86% of patients with DC have bone marrow failure. As such, the mainstay of treatment is the prevention of telomere shortening (androgen therapy) and hematopoietic stem cell transplantation (HSCT). Hepatic involve­ment of DC varies from mild liver disease to hepatic cirrhosis or hepatocellular carcinoma. Hepatic involvement is often seen in patients with mutations in the TERT or TERC genes.8 Unfortunately, there is no treatment for DC-associated liver disease. However, for patients with severe disease, liver transplant may be an option.9 So far, only a few cases of liver transplant in patients with DC have been reported. Here, we report a case of a patient who underwent liver transplant for severe cirrhosis associated with DC.

Recipient
The patient was a 29-year-old male with DC who was referred for liver transplant. The patient’s liver disease had, unfortunately, precluded him from a bone marrow transplant. Although, in retrospect, he had symptoms of DC from a young age, he did not get diagnosed until age 27 years. The patient was born 9 weeks premature and did have some intrauterine growth retardation. He required blood transfusions during the first week of life, but marrow failure did not occur until his teenage years. He developed skin lesions at 5 years old, multiple biopsies of which were indeterminate but nonma­lignant. At 17 years, he developed a spontaneous femur fracture while running. It was at this point that he was also noted to be pancytopenic. Over the next few years, he had additional ankle fractures and had a spontaneous retinal bleed. In addition, he had remained transfusion dependent (monthly) for the ensuing 3 years. In 2015, he underwent further workup for the above symptoms and was subsequently diagnosed with DC. Although HSCT was considered, 1 year later he was noted to have significant liver cirrhosis, with ascites and esophageal varices. Unfortunately, the severity of his liver disease precluded him from HSCT, as well as other supportive therapies, and as such was referred for transplant evaluation. At this point, the patient also had significant respiratory insufficiency with baseline oxygen need of 4 liters via a nasal cannula. He had evidence of fibrotic lung disease and was also being considered for a lung transplant. There was also some evidence of hepatopulmonary syndrome (HPS) with an intrapulmonary right to left shunt.

The patient was evaluated by the liver transplant committee and deemed eligible for liver transplant. His Model for End-Stage Liver Disease score at listing was 19. A pretransplant magnetic resonance imaging scan showed cirrhotic morphology of the liver with patchy hepatic fibrosis, which appeared worse in the right hepatic lobe (Figure 1). The rest of his pretransplant evaluation was unremarkable. A matched organ became available, and the patient underwent an orthotopic liver transplant. His intraoperative course and immediate postoperative course were uneventful. His immunosuppression regimen included low-dose tacrolimus (goal trough level of 5-7 ng/mL), 360 mg of mycophenolic acid, and 5 mg of prednisone. The pathology from the explanted liver showed variably sized cirrhotic nodules, with irregular jigsaw-like patterns (Figure 2, A and B). Trichrome and orcein stains showed comparable patterns of fibrosis and elastin deposition (Figure 2C). Iron staining showed grade 3/4-positive iron deposition. This was consistent with liver cirrhosis with increased iron deposition (Figure 2D).

After liver transplant, the patient showed remarkable improvement in his overall disease process. His pulmonary function improved signi­ficantly, with minimal oxygen needs, and he was removed from the wait list for lung transplant. In addition, the patient had no further blood transfusion requirements, and blood counts have remained stable. However, given the underlying genetic mutation driving his clinical symptoms, he is still being considered for a bone marrow transplant.

Donor
The donor was an unrelated 42-year-old male brain dead donor with blunt head injury. He had no medical comorbidities, no prior surgeries, no history of intravenous drug use, or other risky behavior. Notable pretransplant laboratory tests were normal.

Dyskeratosis congenita is a multisystem disease characterized primarily by bone marrow failure, with most patients showing varying degrees of reticulated skin pigmentation, nail dystrophy, and leukoplakia. The diagnosis requires that the clinician maintain a high index of suspicion for the disease, as the initial presentation often mimics other bone marrow failure syndromes such as aplastic anemia and Fanconi anemia. At the initial presentation, our patient’s pancytopenia was thought to be postviral aplastic anemia, as is often the case in these patients. Most systemic symptoms are generally related to telomerase insufficiency (short telomeres), which typically includes targeting of rapidly dividing cells and tissues.

Severe liver disease occurs in about 7% of patients with DC. The development of liver disease is driven by several factors, including the type of gene mutation, length of telomeres, disease anticipation, and environmental factors.1,10,11 Some liver disease is also the result of treatment for DC. For example, patients who undergo HSCT can develop liver disease as a result of side effects of the transplant regimens.12 Similarly, repeated transfusions can result in acquired hemochromatosis, resulting in further liver injury. That said, telomere shortening itself is thought to be the primary driver of liver cirrhosis in a majority of these patients.3,13 Unlike most organs, the liver can regenerate after injury.

The telomeropathy in DC, however, prevents hepatocellular proliferation and results in cellular apoptosis and fibrosis. As such, liver histology in these patients often shows bridging fibrosis or perisinusoidal fibrosis. Patients with DC are also at increased risk of viral and alcoholic hepatitis.13 This is likely due to increased risk associated with recurrent transfusions, as well as poor recovery from acute insults.

Similar to other patients with end-stage liver disease, liver transplant is an option for DC patients with severe liver disease. However, these patients are at increased risk of other organ system failures, including pulmonary fibrosis, which can complicate the liver transplant process. Additionally, there is increased risk and incidence of HPS in the patient population,14 as seen in our patient. Therefore, a careful evaluation must be done to separate HPS, which is reversible with liver transplant, from DC-related pulmonary fibrosis, which is not. Although most patients often undergo HSCT before liver transplant, our case shows that the reverse can be done safely. This is especially true in those patients who would otherwise not qualify for HSCT due to the burden of their liver disease. The management of immunosuppression in these patients requires close monitoring and avoidance of over-immunosup­pression. Given his impending bone marrow failure and the additional risk of bone marrow suppression with most traditional immuno­suppression, we opted to maintain our patient at lower doses and lower target trough levels. The regimen was well tolerated by the patient. Postoperatively, he had significant impro­vements in pulmonary function, which was likely due to improvements in his HPS. Surprisingly, his transfusion requirements also significantly improved. It remains unclear why this was the case. We suspect that some of his anemia was driven by sequelae of portal hypertension, including gastrointestinal losses (bleeding) and hypersplenism/splenic sequestration, both of which improve with liver transplant.

This case highlights some of the challenges in the management of patients with DC. Although the primary source of morbidity and mortality for most patients is bone marrow failure, the disease phenotype is quite variable. It is a multisystem disease, with severity of symptoms variable among patients. In our case, the liver transplant considerably enhanced the patient’s quality of life and allowed him to qualify for a bone marrow transplant in the future. 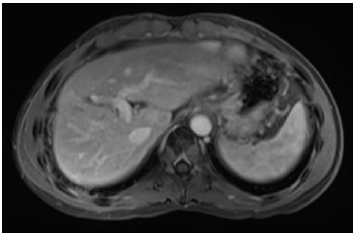 Figure 1. Magnetic Resonance Image of the Abdomen Showing Cirrhotic Morphology of the Liver With Patchy Hepatic Fibrosis, Especially in the Right Hepatic Lobe 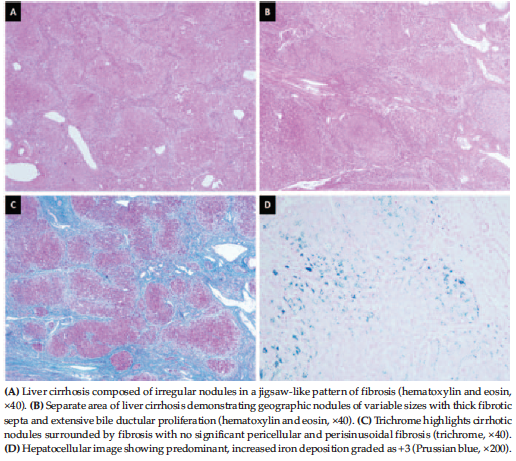