Skin cancers are among the rarely seen complications after solid-organ transplant. Kaposi sarcoma invasion to an allograft is an uncommon condition. In this study, we present a case of Kaposi sarcoma in a 58-year-old patient diagnosed at 8 months after bilateral sequential lung transplant due to chronic obstructive pulmonary disease. Kaposi sarcoma showed rapid progression despite immunosuppressive drug modification, resulting in lung involvement and respiratory failure. Rapid and complete improvement was achieved with rapid diagnosis and aggressive treatment that included combined chemotherapy after surgery. The patient presented with no complications from Kaposi sarcoma at month 26 after transplant.

A 58-year-old male patient diagnosed with chronic obstructive pulmonary disease underwent bilateral sequential lung transplant. Posttransplant immuno­suppressive therapy was initiated with basiliximab induction, followed by triple immunosuppressant therapy with tacrolimus, mycophenolate mofetil, and prednisolone. After a successful posttransplant recovery period, the patient was weaned from mechanical ventilation at hour 28 and discharged on day 33. The patient was administered cytomegalovirus prophylaxis with valganciclovir and aspergillosis prophylaxis with inhaled amphotericin B for 3 months.

The first 8 months posttransplant were free of complications during follow-up visits. However, a red-purple maculopapular lesion of 0.5 × 0.5 cm was detected under the left breast during an 8-month follow-up examination. A skin biopsy was per­formed, with the examination showing positivity for HHV-8. Therefore, an HHV-8-positive KS diagnosis was established from the skin biopsy. A fluoro­deoxyglucose-18 positron emission tomography-computed tomography scan showed no distant organ metastases. Fiberoptic bronchoscopy and lower and upper gastrointestinal system endoscopy also showed results within normal limits. The patient subsequently received surgical excision to completely excise the lesion. Surgical margins were negative for malignancy. A further test for HHV-8 deoxyribonucleic acid showed positivity in a blood sample. Mycophenolate mofetil was discontinued, and doses of tacrolimus and prednisolone were reduced. Everolimus was added to the patient’s immunosuppressive regimen.

Because the patient did not respond to the previous nonspecific treatment, he received a bronchoscopic transbronchial biopsy (TBB). During the TBB, 2 red-purple lesions of 1 to 1.5 cm diameter were observed in the oral cavity; 1 lesion was located in the right-lower molar teeth, and the second lesion was at the left-upper lateral oral mucosa (Figure 2). A punch biopsy was obtained from these lesions. The TBB and bronchial lavage were obtained from the right-lower lobe basal segments with fiberoptic bronchoscopy.

Pathologic examinations of the oral mucosa biopsies and the TBB were confirmed to be KS (Figure 3). The TBB determined that the allograft also had KS. The patient had both clinically and radiologic rapid progression during follow-up. Arterial oxygen saturation was detected to be as low as 80% at rest. Because of the rapid progression, the patient was referred to the oncology department, and chemo­therapy was initiated with doxorubicin, bleomycin, and vincristine, with termination of tacrolimus therapy. Immunosuppressive maintenance therapy was adjusted to everolimus and prednisolone. The patient was discharged with clinical and radiologic regression after the first cycle of chemotherapy. Oral and pulmonary lesions were almost completely regressed after 4 cycles of chemotherapy (Figure 1 and Figure 2). At 26 months posttransplant and at 18 months after diagnosis of KS, the patient is continuing to have no further complications from KS.

Kaposi sarcoma is a mesenchymal tumor and commonly involves skin and mucosal surfaces. Kaposi sarcoma was originally described in 1872.3 The causative agent of KS is HHV-8.1 Proportionally to its seroprevalence, HHV-8 is more commonly seen in Asia, South America, and Mediterranean countries. It is thought that the disease emerges in transplant patients after reactivation of recipient- or donor-induced latent viral infections3 Our patient was not tested for HHV-8 before lung transplant as HHV-8 testing in recipients and donors was not part of our protocol.

In the US Solid-Organ Transplant Registry, of 244 964 transplant recipients evaluated from 1987 to 2014, 163 KS cases were identified during follow-up. Risk of KS increases with advanced age, male sex, lung transplant recipients, nonwhite race/ethnicity, and non-US citizenship.4 Kaposi sarcoma after lung transplant has been reported in case reports and has been reported to occur during different post­transplant time periods and with different clinical involvements. In the case report from Martinez and associates, a patient developed KS within the first 6 months posttransplant.5 However, Piselli and associates reported that the risk decreases over time, with risk of KS decreasing by 80% after month 18 posttransplant.6 In our patient, the first symptoms began in month 8 posttransplant.

Decreasing immunosuppressive therapy and initiation of mammalian target of rapamycin (mTOR) inhibitors are first-line treatments for KS and are sufficient in most cases.7-9 However, decreasing immunosuppressive therapy is like a 2-edged knife for the lung transplant recipient, with the lung graft having a higher risk of rejection than other solid organs.1 Mammalian target of rapamycin inhibitors inhibit the replication of HHV-8, which is important in tumor formation, and suppress production of vascular endothelial growth factor. Therefore, successful outcomes have been achieved with mTOR inhibitors in patients with KS.8,10 Radiotherapy, chemotherapy (doxorubicin, bleomycin, vincristine), and surgical treatment are effective treatment methods in eligible patients and should be started without delay in patients who show progression despite decreasing immunosuppression.11

Cases with lung involvement may progress to death without early diagnosis and without early treatment.11 In a report from Meira and Damas of 2 lung transplant recipients with KS,12 both patients had rapid clinical deterioration that prevented them to start specific therapy for KS. In the case from Nannini and colleagues, despite initiation of chemotherapy, the patient had rapid progression of KS that prevented continued treatment, which resulted in death.13 However, Sharif-Kashani and associates reported starting chemotherapy in their patient who showed progression, despite the use of an mTOR inhibitor, with successful control of the disease.14 In our patient, discontinuation of myco­phenolate mofetil, decreasing tacrolimus levels, and adding everolimus to the immunosuppressive protocol did not prevent progression, and the patient unfortunately had both pulmonary and oral mucosa symptoms. With regard to pulmonary findings, the patient became oxygen dependent and immobile with shortness of breathing. This prompted us to administer chemotherapy.

The first-line, single-agent use of doxorubicin chemotherapy has been previously reported.14 However, we administered a combined chemotherapy protocol with doxorubicin, bleomycin, and vincristine due to a KS involvement in the lung allograft and the rapid progression of disease. As a result, the patient dramatically and rapidly responded to chemotherapy and was discharged in the first week after initiation of chemotherapy. His oral lesions almost disappeared after 4 chemotherapy cycles, and the thoracic computed tomography findings revealed complete resolution.

There are a number of adverse effects of chemotherapeutic agents, including neutropenia, peripheral neuropathy, increased pigmentation in the skin, hair loss, and elevated serum creatinine, which were detected in our patient. However, this timely and suitable decision for chemotherapy with combined agents resulted in the cessation of the rapid progression of KS, and treatment resulted in both radiologic and symptomatic benefits. Both malignancy recurrence and rejection were successfully prevented with maintenance treatment of 7 to 10 ng/mL everolimus and 5 mg/day prednisolone.

Although uncommon, skin cancers and KS are encountered complications after lung transplant. However, allograft invasion of KS and pulmonary KS are extremely rare in the literature. Common features of patients with pulmonary parenchymal involvement are presentation of clinical symptoms and rapid progression. Patients diagnosed with KS should be urgently investigated for involvement of other organs, the level of immunosuppression should be lowered, and an mTOR inhibitor should be initiated instead of calcineurin inhibitors. Surgery should be performed in these patients if possible, and, in cases of rapid progression and suspected pulmonary involvement, interventional investigations to confirm diagnosis and involvement of visceral organs should be rapidly completed. For patients with KS and pulmonary involvement, rapid confirmation of the diagnosis and application of aggressive combined chemotherapy are life-saving steps.

Figure 1. Radiographic and Computed Tomography Results of a Patient with Kaposi Sarcoma 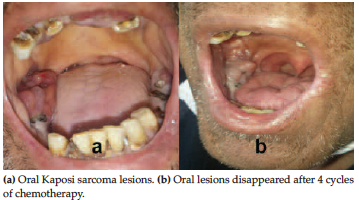 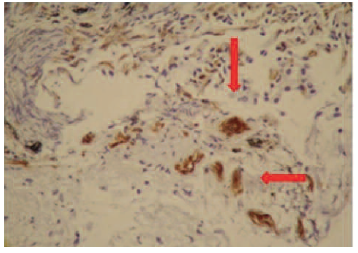