Since the first successful living-donor liver transplant (LDLT) was performed by Strong and associates, LDLT has become as an alternative to deceased-donor liver transplant (DDLT).1,2 When compared with deceased liver donor, vascular reconstructions are critical in a graft obtained from a living-liver donor. Arterial complications are one of the most common causes of morbidity, graft loss, and mortality after an LDLT that is related with the presence of anatomic variations (eg, grafts with multiple hepatic artery branches).2,3 Major causes of posttransplant mortality and graft loss include hepatic arterial thrombosis, pseudoaneurysm, dissection, and obstruction in liver transplant (eg, hepatic arterial thrombosis). Hepatic artery complications occurring as early as 1 week after the LT are mostly associated with technical errors, while later complications result from various factors including hypercoagulability, acute rejection, unbalanced transfusion, which call for treatment strategies designed based on the time-cause relation. We present our experience with double-hepatic artery reconstruction in LDLT.

Between January 2002 and June 2014, one thousand thirty-six LDLT were performed at the Inonu University Liver Transplant Institute. Living-liver grafts with single hepatic artery (HA) were used in 983 recipients, while a liver graft with double HA branches was used in 53 recipients. Multidetector computed tomography was used routinely for the preoperative evaluation of hepatic vascular anatomies in living-liver donor candidate. Accordingly, the HA anatomy was predicted by preoperative multi-detector computed tomography and confirmed intraoperatively by the hilar dissection.

During this period, HA anastomoses were performed by 2 experienced surgeons using microvascular surgical techniques and surgical loupes with ×8 magnification. After the arteries from both grafts and recipients were flushed with isotonic solution, they were approximated with 2 separate bulldog clamps and then fixed. The anastomoses generally were started from the left corner of the graft and the recipient HA. First, the anterior wall was completed with interrupted 8-0 Prolene sutures. Then, the end clamp was placed on the first suture that crossed under the bottom of the anastomosis, and the anastomosed section formed the posterior wall. The sutures and endothelium located before the incomplete portions forming the anterior wall were checked, and the procedure continued without connecting each of the sutures. Once all sutures were completed, the arteries were connected. First, the bulldog clamp on the graft side was released and then the recipient bulldog clamp was removed (Figure 1).

When evaluating nondominant HA cases, first the dominant HA anastomosis was performed and backflow testing was conducted through the nondominant HA, after which a pulsatile intrahepatic arterial assessment was carried out using Doppler ultrasonography (US). In cases with positive results in both tests, the nondominant HA was ligated. In our series, the nondominant HA branch of 10 liver grafts was ligated. No complications were observed on follow-up of these recipients. In cases with negative results, in 1 of the 2 tests, the nondominant HA branch in the liver graft was anastomosed to the recipient's hepatic artery for the arterial supply. In cases with a short HA, if removal of the support behind the liver caused tension, the diaphragmatic application technique or temporary placement of an intrauterine balloon filled with saline may be used. Postoperative arterial and venous patency evaluations were performed Doppler US for 3 days after LT. The detected vascular insufficiency was checked by multidetector computed tomography.

Patients were prescribed continuous anti-aggregation with 100 mg/day acetylsalicylic acid for the first week after the LT. Triple-therapy immuno-suppression regimen consisting of corticosteroids, tacrolimus, and mycophenolate mofetil was routinely administered. Corticosteroids were started on the day of surgery, which then were tapered gradually decreasing the daily dosage and discontinued at 3 months except in recipients with autoimmune causes. Tacrolimus was started on postoperative day 3; the daily dosage was adjusted to maintain a whole trough blood tacrolimus concentration of 15 to 20 ng/mL within the first 3 months after LT, which was reduced to a maintenance dosage of tacrolimus blood levels of 5 to 10 ng/mL. Mycophenolate mofetil was begun on postoperative day 2 and was discontinued at 6 to 12 months after the LT.

Living-liver grafts with double HA branches were used in 53 recipients. Among these, double HA anastomoses were created in 43 recipients, while a single anastomosis was created in the remaining 10 recipients because the nondominant HA was ligated. In 40 recipients (93%), double HA branches in the graft were anastomosed with the recipient’s right and left HA. Liver grafts with double HA branches were anastomosed with the recipient’s right HA and large segment 4 HA in the remaining 3 recipients (7%). Postoperative complications related with HA anastomoses developed in 3 recipients: hepatic arterial thrombosis (n = 1), HA aneurysm (n = 1), and HA stenosis (n = 1). A recipient with hepatic arterial thrombosis had elevated liver enzymes on postoperative day 10, and Doppler US showed no arterial flow. When the multidetector computed tomography detected a thrombosis, the recipient was treated with operative thrombectomy. Because of high levels of liver enzymes and no intraparenchymal arterial supply, even on day 4 after thrombectomy, are transplant was performed. However, the recipient died because of septic complications. A retransplant was performed on a recipient who developed an HA aneurysm on postoperative day 2. There were no complications after retransplant.

An HA stenosis in 1 recipient was diagnosed with Doppler US on postoperative day 2. The main symptoms of the patient were hepatic dysfunction and abdominal pain. Laboratory findings showed elevated levels of liver enzymes. The patient was followed conservatively and no further complications were detected on follow-up. One patient developed a portal, and another patient a caval, anastomotic stenosis, both of whom were treated with balloon dilatation. In 8 patients, we detected extrahepatic biloma and in 5 patients biliary stenosis. On posttransplant day 4, a recipient developing portal vein thrombosis was treated with operative thrombectomy, and there was no recurrence during follow-up. The mean follow-up was 15 months (range, 1-56 mo) for all recipients, and we did not observe any complications related to the HA anastomosis.

The limited number of subjects in the deceased donor pool and the long wait time for a liver transplant has led to an increase in the number of LDLTs as an alternative choice. Compared with DDLT, the main advantages of LDLT include its ability to perform elective surgery, shorter wait time, higher number of grafts available for children, shorter cold ischemia time, and reduced mortality and morbidity because of the low incidence of primary graft nonfunction. This increase of LDLT encounters several anatomic variations, especially arterial variations. In our series, the incidence of double HA branches in right lobe grafts were 5.1%, which was consistent with previous studies reporting an incidence ranging from 1.5% to 12%.4-7 As far as the left liver graft is concerned, this rate is higher than 50%, as the middle hepatic artery usually originates from the right HA.8,9

Whether a double HA anastomosis is required in cases with a double HA branch is debatable. While some advocate a double anastomosis to allow safe arterial perfusion for the graft that would otherwise not receive an arterial supply,7,8 others defend that ligation of either HA should achieve rearterialization of the interlobar collateral arteries, which might compensate the arterial supply for the graft.9,11 They also argue that single anastomosis leads to an increase in diameter and blood flow of the artery, and thus prove useful to prevent HA thrombosis.12 In our 10 cases, ligation was performed after detection of pulsatile backflow.

The previously high incidence of complications has decreased gradually to 2% with the use of advanced microsurgery techniques.13-15 In addition, apart from microsurgery applications, the actual location of the graft should be calculated keeping in mind the layers of gauze placed to reposition the graft, thus preventing stress-driven segregation, pseudoaneurysm, or kinking because of elongation of the artery. These potential problems call for a better attention in the presence of a double HA. In our opinion, if the support behind the liver is removed and causes tension, the diaphragmatic application technique or temporary placement of an intrauterine balloon filled with saline may be used in patients with a short HA.

Although a successful outcome may be obtained by methods such as an emergent thrombectomy, thrombolysis, and revision of an HA anastomosis in some patients with early posttransplant com-plications related with an HA anastomosis, retransplant remains the criterion standard.16,17 However, the capacity of the deceased-donor pool located in many Asian countries, including Turkey is limited, and the supply of organs is not easy in an emergency. Therefore, to minimize the need for retransplant, it is important that early recognition of complications (eg, hepatic arterial thrombosis and the application of one or both of the operations of thrombectomy, thrombolysis, or reanastomoses) is made as soon as possible.16,17

Patients treated with a double HA anastomosis may be expected to have a higher risk of developing arterial complications because of the short and smaller caliber, as compared with a single HA anastomosis.

Key points for a double HA anastomosis
1. Because of HA anastomoses-related complications resulting in significant loss of graft, it is important to know about preoperative variation in the HA. Vascular structures of the living liver-donor candidates should be examined with multidetector computed tomography. Suspected donor candidates should be evaluated with conventional angiography. In this way, intraparenchymal connections of the branches of the HA and knowledge about the areas supplied can be seen.

3. There are a few centers using the ex situ anastomosis technique for a double HA anastomosis. But we do not recommend this because of the increase in cold ischemia time and the number of anastomoses.

4. The decision whether to perform double arterial anastomosis in the presence of double HA should be based on the pulsatile backflow and Doppler US for the nondominant artery, which should be obtained after the dominant HA anastomosis has been finished. We usually include all nondominant arteries that the inner diameter is larger than 1.5 mm in the anastomosis.

5. In patients who developed early hepatic arterial thrombosis after a double HA anastomosis, we first recommend thrombectomy, thrombolysis, and/or revascularization. These patients should be followed closely, and we must not avoid retransplant if necessary.

From the Inonu University, Faculty of Medicine, Department of General Surgery, Malatya, Turkey
Acknowledgements: The authors declare that they have no sources of funding for this study, and they have no conflicts of interest to declare.
Corresponding author: Tugrul Cakir, MD, Inonu University, Liver Transplant Institute Department of General Surgery, 44315, Malatya, Turkey
Phone: +90 422 341 0660
E-mail: tugrul-cakýr@hotmail.com 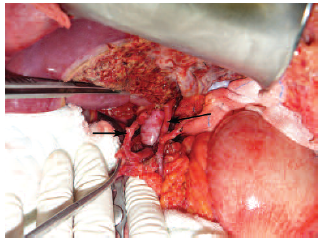