Acute graft-versus-host disease (GVHD) is a T-cell-mediated disease that occurs when a graft contains immunocompetent lymphoid cells that recognize the recipient (the host) as foreign, with subsequent initiation of an immune response against the host. Incidence of GVHD is 20% to 80% after hematopoietic stem cell transplant, but the incidence after liver transplant (LT) is <1% and is associated with higher mortality,1,2 despite the fact that LT has been proposed to carry lymphocyte numbers comparable to hematopoietic stem cell transplant.2,3 The total number of pediatric recipients with acute GVHD after LT reported in the literature is <25 individuals overall.2,3 Here, we report 2 cases of acute GVHD in pediatric recipients of living donor LT (LDLT), as well as the difficulties in the diagnoses, the clinical courses of treatment, and outcomes.

A 4-year-old male child underwent LDLT for acute liver failure of indeterminate etiology with grade 3 hepatic encephalopathy and severe coagulopathy. The LDLT donor was the child’s father, who donated his left lateral segment to the child. Postoperative recovery was uneventful, and the recipient was discharged with good graft function after 18 days of hospital stay. At post-LT day 36, this patient presented with generalized maculopapular skin rash and high-grade fever. The rash started on the back of his ears and subsequently spread all over his body, including his palms and soles. We considered several different diagnoses, including measles, Kawasaki disease, vasculitis syndromes, drug reaction, toxic epidermal necrolysis, and hemophagocytic lympho-histiocytosis. Evaluation for infective etiology was negative, but the fever persisted, so we proceeded with a regimen of multiple antibiotics and antiviral and antifungal agents. Results were unremarkable for echocardiogram, bone marrow biopsy, and computed tomography of brain, chest, and abdomen. Adequate graft function of the transplanted liver was maintained, and Doppler ultrasonography results showed no abnormalities. The skin rash of the patient was persistent and progressive, so we proceeded with a skin biopsy 10 days after presentation. Skin biopsy results suggested acute GVHD (grade 2). We initiated treatment with methylprednisolone at a dose of 2 mg/kg for 3 days followed by oral taper of prednisolone, and his clinical response was charac-terized by defervescence of fever, improvement in clinical condition, and resolution of rash. He was discharged after a hospital stay of 21 days. Oral steroids were tapered to 0.25 mg/kg/d, and tacrolimus was continued with a target trough level of 8 to 10 ng/mL. This patient presented with generalized lymp-hadenopathy at 165 days after LT, and cervical lymph node biopsy results were confirmatory for polymorphic posttransplant lymphoproliferative disease (PTLD). Epstein-Barr virus (EBV) level by polymerase chain reaction was 164?000 copies/mL. Test results for EBV viral load were negative at the time of GVHD diagnosis. Further evaluation with biopsy and positron emission tomography showed involvement of graft liver and bone marrow. Tacrolimus was stopped, and the patient continued with a regimen of oral steroids (0.25 mg/kg/d), as well as weekly treatment with rituximab (375 mg/m2 body surface area). The patient developed high-grade fever with skin rash 25 days after change of immunosuppression; the rash was typical of GVHD, and skin biopsy results confirmed the recurrence of GVHD. Unfortunately, his clinical condition worsened, and he died from Klebsiella pneumoniae septicemia at 208 days after LT.

A 22-month-old male child with Alagille syndrome underwent LDLT (father was the donor) for decompensated liver disease. After 16 days of hospital stay, patient 2 was discharged in stable condition with good graft function. He presented 32 days after LT with persistent high-grade fever, diarrhea, and an erythematous maculopapular rash that started behind the ear and extended to the limbs, palms, and soles. After 48 hours, the rash was present throughout the body. Because the rash was typical of acute GVHD, we proceeded with a skin biopsy, the results of which confirmed the diagnosis of acute GVHD (Figure 1). Peripheral blood analysis for donor chimerism showed 8.3% donor lymphocytes (reference level after LT is ?3%).2 This patient was started on a regimen of 2 mg/kg of methylp-rednisolone (for 5 days) with oral and topical tacrolimus. Clinical response was favorable, with a decrease in intensity of skin rash, as well as resolution of diarrhea and fever, so we changed the immunosuppression regimen from methylpred-nisolone to oral prednisolone (2 mg/kg/d) for 2 weeks followed by taper (0.2 mg/kg every 5 days). However, this patient had recurrence of fever and diarrhea with progressive intensity, and skin rash was extensive at 20 days after initiation of treatment during the period of steroid taper. Because his symptoms recurred, we obtained a skin biopsy, which showed exacerbation of the GVHD (stage 2 to 3). We initiated a second-line treatment with etanercept (0.4 mg/kg twice weekly, 5 doses), methylprednisolone (4 mg/kg/d for 5 days), and intravenous immunoglobulin (1 g/kg, single dose). Because of extensive skin involvement with severe pruritus, topical tacrolimus was continued and topical mometasone (0.1%) was added. Oral prednisolone was started at a higher dose (5 mg/kg/d) and was tapered slowly. Complete remission of GVHD was evident at 71 days after LT. The treatment course of this patient was complicated by urinary tract infection with Proteus mirabilis and an increase in EBV from 10?000 copies/mL to 592?000 copies/mL after 3 months of treatment. The target trough level of tacrolimus decreased to 6 to 8 ng/mL, and steroids were tapered. There was no clinical evidence or radiological evidence of PTLD. Follow-up in patient 2 has shown good graft function with remission of GVHD at 5 months.

Pediatric LT recipients have a lower rate of mortality after GVHD versus adult LT recipients (36% vs 75%, respectively).2 Children under 5 years of age and recipients with HLA-mismatched LT donors have increased risk of GVHD development.3 The diagnosis of GVHD is based on the presence of compatible clinical features, histopathological confirmation (most commonly from skin or gastrointestinal system), and donor chimerism in the recipient’s peripheral blood.2,4 A skin biopsy that shows epithelial cell necrosis in the absence of clinical findings of GVHD is not significant.2,4 Across the literature, in 33 patients with a clinical suspicion of GVHD, only 7 cases of peripheral blood chimerism GVHD were confirmed; for all of the remaining patients, an alternative diagnosis was reached or they recovered spontaneously.2,3 In the absence of clinical features, presence of peripheral blood chimerism is nonspecific and may be frequently seen (>70% of recipients) up to 8 weeks after LT.2,3 The incidence of acute GVHD in our unit is 0.57% (2 patients of a total of 348 pediatric recipients over 10 years). Diagnosis of GVHD is frequently delayed because of its rarity and its nonspecific initial symptoms. It is important to consider GVHD as a possibility for any patient with fever, diarrhea, or skin rash who is unresponsive to treatment or whose condition deteriorates despite treatment.5 The most common differential diagnoses considered at the onset of fever/rash due to GVHD include drug-induced complications, viral exanthemas, infectious enteritis (cytomegalovirus and/or Clostridium difficile colitis), and organ rejection.2,4 The time interval between the appearance of first symptom and definitive diagnosis or treatment can vary from 1 to 65 days and has been postulated as a predictor of mortality, which highlights the need for early diagnosis.4 Immunosuppression in both of our patients at the time of GVHD diagnosis consisted of tacrolimus (target trough level of 8 to 10 ng/mL in the first 6 months after LT) and oral prednisolone (1 mg/d), and neither patient had a rejection episode after LT. For treatment of GVHD, our first-line treatment consisted of methylprednisolone (2 mg/kg/d) followed by oral taper of 0.2 mg/kg every 5 days and tacrolimus (Table 1). Second-line treatment consisted of addition of etanercept. We have found topical application of tacrolimus and steroid to be an effective adjuvant to the treatment. There is no standardized protocol for management of GVHD after LT. A steroid regimen is the usual first-line treatment, with remission induced in 55% of patients and with relapse in 45%.3 There is no consensus on the second-line treatment for steroid-resistant GVHD or for GVHD relapse; regimens of infliximab, anti-thymocyte globulin, alemtuzumab, rituximab, and sirolimus have been attempted.3 Complete response to treatment in GVHD is defined as resolution of all signs and symptoms of acute GVHD at day 28 after initiation of treatment. Although remission was induced in our first patient, he developed EBV-driven PTLD followed by recurrence of GVHD when the immunosuppression regimen was altered. The EBV counts for our second patient also increased after treatment for GVHD. Pinna and colleagues have described 2 pediatric LT recipients with recurrence of GVHD, but the diagnoses of the first episodes in both patients were not confirmed.5 Our patients were confirmed to have GVHD in both episodes. Although reduction or discontinuation of immunosuppression has been attempted in previous studies, in an effort to enable the host immune system to destroy the donor lymphocytes and thereby mediate GVHD, these scenarios were associated with differing clinical responses and rates of remission.2,4 Survival depends on the response to initial therapy with steroids.4 It has been postulated that patients with persistent gastrointestinal and bone marrow involvement have higher risk of mortality.4 Gut involvement due to GVHD could be the explanation for diarrhea in our second patient; however, we did not perform endoscopy, because (1) the diagnosis of GVHD was confirmed with skin biopsy, (2) screening for infection was negative, and (3) diarrhea subsided with initiation of treatment. It is important to maintain vigilance for opportunistic infections (bacteria, EBV, adenovirus, human herpesvirus 6) and PTLD in every patient under treatment for GVHD.4 Prophylaxis with antifungal agents active against molds and low threshold for treatment with ganciclovir or foscarnet should be considered.4 The risk is further exacerbated by the intense T-cell depression that can occur with second-line agents (antithymocyte globulin, alemtuzumab, etanercept), but this can occur in any patient, as our experience indicates.4 In summary, our report describes the treatment protocol and clinical course for 2 pediatric patients who developed acute GVHD after LDLT. It is important to consider GVHD in the differential diagnosis of febrile events after LT, because early diagnosis and treatment is associated with better prognosis. 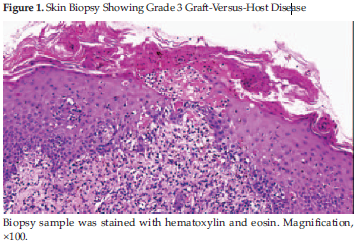