As the scarcity of transplantable organs continues to increase, juxtaposed with an aging donor population, transplant surgeons are increasingly confronted with marginal organ offers. The presence of atherosclerosis in the donor allograft has been shown to compromise the vascular integrity and predispose to vascular complications in the transplanted liver. Here, we present a case of 54-year-old brain-dead donor who was discovered to have a severely diseased aorta during organ recovery. Pathologic evaluation revealed severe atherosclerosis with calcifications. Because there was no evidence of donor graft dysfunction, we elected to proceed with implantation, although thoughtful consideration was given to aborting the procedure. The donor hepatic artery was resected from the bifurcation of the splenic artery and the common hepatic artery until no further gross atheromas were evident; this segment was then anastomosed with the recipient proper hepatic artery. The recipient is doing well 6 months after transplant without any significant adverse postoperative events. The presence of severe atherosclerosis should not discourage the use of an otherwise adequate graft. Novel newer preservation techniques, such as normothermic perfusion, may enable functional graft evaluation and can increase the utilization of marginal grafts.

Since liver transplantation (LT) became the standard of care for treating end-stage liver disease, there has been an increase in the demand for deceased donor organs. In 2016, 7841 adult LTs were performed in the United States.1 Unfortunately, the demand for donor organs far outnumbers the available grafts. Each year, over 2600 patients either die waiting for a donor liver or have to be removed from the transplant wait list because they became too sick to undergo LT.1 This shortage has led surgeons to expand their criteria for acceptable grafts, which may not always be optimal but nonetheless can remove a candidate off the wait list.2,3

Vascular complications remain the Achilles heel of LT. These complications are associated with high morbidity and mortality and often lead to graft loss.4 Considering that cerebrovascular accidents remain one of the primary causes of death in deceased liver donors,1 it can be inferred that donors with significant atherosclerotic risk are common. Albeit rare and not a contraindication to LT, atherosclerosis of the hepatic artery or celiac trunk5,6 may complicate the liver engraftment by exposing the vascular anastomosis to potential complications like hepatic artery thrombosis and dissection. Some groups have advised extreme caution when significant calcific plaques extend into the common hepatic artery, with some even suggesting that atheromatosis at the bifurcation of the common hepatic artery or the gastroduodenal artery is a relative contraindication to using the liver graft.5,7,8

The presence of atherosclerosis to this extent often results in cancellation of the transplant if the surgeon deems the graft's arterial supply compromised.5 It has also been suggested that extensive atherosclerosis may result in low hepatocyte viability by preventing effective cooling and adequate solution perfusion of the graft at the recovery.5 Despite the availability of diagnostic techniques like abdominal duplex scanning and mesenteric angiography, evaluation of atherosclerosis and patency of the arterial supply of the donor liver is often not performed before organ recovery.5,9

Herein, we present a case of extreme atherosclerosis of the aorta discovered in a brain-dead donor during liver recovery and review the pertinent literature. This successful LT with a marginal liver graft illustrates the potential utility of these organs.

The donor was a 54-year-old white male with a history of hypertension, type 2 diabetes mellitus, hypercholesterolemia, and coronary artery disease and who required angioplasty 8 years before presentation. He was found unresponsive at home after cardiopulmonary arrest. After cardiopulmonary resuscitation, he was transferred to the hospital where cardiac catheterization was unsuccessfully performed. He progressed to brain death about 19 hours after admission, and his family decided to pursue organ donation.

During liver recovery, the donor's aorta was found to be black-colored with multiple ulcerated yellow-orange plaques. A piece of the aorta (Figure 1) was retrieved and sent to the pathology laboratory for examination given its unusual appearance. Pathologic analysis revealed severe atherosclerosis with calcifications, with no evidence of aortic dissection or a mycotic aneurysm, which were initially suspected. The donor artery was resected to the bifurcation of the splenic artery and common hepatic artery until no further gross atheromas could be appreciated, and this was anastomosed end-to-end to the recipient's proper hepatic artery. The remainder of the operation proceeded uneventfully. The recipient remained in the hospital for 2 weeks due to a contained bile leak, which was treated with an endoscopic retrograde cholangiopancreatography and papillotomy. After discharge, the patient has been followed closely and is doing well without any significant events. At his most recent clinic visit, he demonstrated normal liver function.

Donors older than 65 years of age have accounted for 6% to 7% of liver donors in the United States over the past 15 years.1 The proportion is even higher in countries like Spain where donors older than 70 years accounted for 32.3% of annual liver donations in 2015.8 These numbers are expected to increase due to an aging donor population, proven adequacy of older donor grafts, and an increasing demand for LT. Grafts from older donors are not without their concerns. These grafts are associated with higher incidence of primary nonfunction and poor early graft function.10 Older donors also pose the risk of graft atherosclerosis, especially among those with predisposing risk factors like obesity, diabetes, and smoking.

Our review of the literature for cases of atherosclerosis involving the aorta, celiac artery, or hepatic artery in a liver donor yielded a single case report of atherosclerosis involving the hepatic artery. In that report, the liver transplant was cancelled due to concerns about the extensive involvement of the arterial conduit, which caused reduced arterial patency and subsequent low hepatocyte viability.5 Although purely speculative, it is our impression that most severely atherosclerotic grafts are discarded. In our case, the patency of the graft supply and the graft viability were deemed to be adequate, and LT proceeded as planned with no adverse events in the recipient so far.

The hitherto rarity of atherosclerotic involvement of the celiac trunk or hepatic artery, juxtaposed with concerns about possible vascular complications, has traditionally resulted in the abandonment of the procedure and the discard of an otherwise adequate graft. However, with the growing number of patients on transplant wait lists and an aging donor population, there will be increased offers for surgeons to use marginal organs. Such offers will require additional consideration in the surgical decision-making process.

The mere presence of atherosclerosis should not dissuade the use of a liver graft. Cardiovascular risk factors in donors, such as hypertension, diabetes, hypercholesterolemia, or prior cardiac procedures, should arouse greater scrutiny of the vasculature of the liver. These donor risk factors may justify more extensive imaging studies, such as ultrasonography or computed tomography, which may elucidate perilous vascular anatomy. Atherosclerotic but otherwise adequate grafts may also benefit from reduced ischemic times as seen in grafts from older donors.11,12 In these cases, coordination between procurement and recipient teams can help minimize ischemic times to less than 8 hours, as this has been shown to improve recipient outcomes.11,12

Finally, the older atherosclerotic marginal liver graft provides an excellent opportunity to evaluate novel techniques for graft assessment and recon­ditioning, such as normothermic liver perfusion.13-16 This system allows for the evaluation process to proceed beyond recovery and to obtain a physiologic assessment of the graft to better gauge a marginal organ's biochemical behavior after organ recovery. The information gleaned from the normothermic perfusion phase of a marginal allograft may provide insight into that graft's potential function immediately prior to implantation.

Transplant surgeons are increasingly faced with challenging decisions regarding marginal grafts, including those from older donors. The presence of atherosclerotic plaques in a graft should not be an exclusion factor when utilization decisions are made. We present the successful transplant of a liver graft from a donor with extensive and severe atherosclerosis to illustrate the usability of these grafts. Novel preservation techniques, such as normothermic perfusion, can allow potential functional evaluation and additional objective decision-making, in an attempt to increase the rate of marginal graft utilization.

From the Division of Transplantation, Department of Surgery, University of Minnesota, Minneapolis, Minnesota, USA
Acknowledgements: The authors have no sources of funding for this study and have no conflicts of interest to declare.
Corresponding author: Ayokunle S. Olowofela, Department of Surgery, Division of Transplantation, Mayo Mail Code 195, 420 Delaware Street SE, Minneapolis, MN 55455, USA
Phone: +1 612 625 5151
E-mail: olowo008@umn.edu 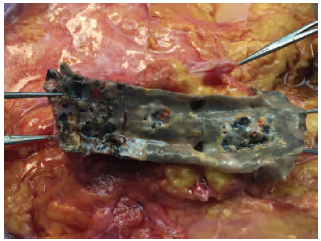