Renal transplant is the most important option of renal replacement therapy; it reverses the negative effects of end-stage renal disease such as erythropoietin-dependent anemia. Posttransplant anemia may have various causes, including infections, medications, and poor graft function.1 Various studies have reported drug-related mild-to-moderate anemia in different ratios caused by calcineurin inhibitors, mycophenolate mofetil, and others, after solid-organ transplant.2 Pure red cell aplasia (PRCA) is a rare cause of posttransplant anemia, and it is characterized by severe normocytic anemia, reticulocytopenia, and absence of precursor erythroid cells in the bone marrow. Tacrolimus is an immunosuppressive agent that is often used during the posttransplant period, without a significant potential for myelosuppression. There are a small number of case reports in the literature of tacrolimus-associated PRCA. Here, we report a renal transplant recipient who developed PRCA while under treatment with tacrolimus, with a complete recovery after the switch from tacrolimus to cyclosporine.

A 38-year-old man with end-stage renal disease due to immunoglobulin A nephropathy underwent an uncomplicated living-related renal transplant (from his mother) in August 2019. Four months after transplant (in December 2019), he was admitted to our outpatient hematology clinic and presented with fatigue, palpitation, and a history of erythroid transfusion (5 units) during the previous 1 month. He was under treatment with tacrolimus and pred­nisolone for immunosuppression; other medications were pantoprazole, metoprolol, and allopurinol. The physical examination was normal except for pallor, tachycardia, and a grade 2/6 systolic murmur. The hemoglobin level was 6.3 g/dL, and leukocyte and thrombocyte counts were normal. Serum creatinine was 1.5 mg/dL. A peripheral blood smear showed normocytic normochromic anemia, and the retic­ulocyte percentage was low (0.11%). There was no blood loss or hemolysis. Direct and indirect Coombs tests were negative. Biochemical results, serum iron studies, and vitamin B12 and folate levels were normal. The results of an enzyme‐linked immuno­sorbent assay for viral infections (hepatitis B and C, cytomegalovirus, Epstein-Barr virus, and parvovirus B19) were also negative; furthermore, DNA for cytomegalovirus and BK virus was not found by polymerase chain reaction. To rule out autoimmune etiologies, we performed antinuclear antibody tests, serum complement levels, and serum and urine immunofixation electrophoresis, but no abnormality was detected. Imaging studies did not show any malignant disease, such as thymoma or lymphoma.

Bone marrow aspiration and biopsy revealed severe hypoplasia of erythroid series with normal maturation of other cell lines that is suggestive of PRCA (Figure 1). While we were investigating anemia, the patient required 5 units of erythroid transfusion. After we excluded other causes, we considered the possibility of tacrolimus as the causative agent because a few tacrolimus-associated PRCA cases have been reported in the literature. After tacrolimus was switched to cyclosporine, the hemoglobin level started to improve at 1 month and transfusion dependency disappeared. Four months after starting cyclosporine, his hemoglobin level was 16.1 g/dL and serum creatinine was 1.7 mg/dL (Figure 2).

Pure red cell aplasia is a syndrome defined by a normocytic normochromic anemia with severe reticulocytopenia and, while other cell lines are in normal maturation, a marked reduction or absence of erythroid precursors exists in the bone marrow. Acquired PRCA is generally secondary to various disorders including systemic lupus erythematosus, chronic lymphocytic leukemia or large granular lymphocyte leukemia, parvovirus B19, thymoma or other solid tumors, drugs, or toxic agents.3

Multiple drugs have been reported to date (as case reports) as possible causes of PRCA, such as diphenylhydantoin, fludarabine, recombinant erythropoietin, and azathioprine.3 In addition, immunosuppressive agents, particularly mycophe­nolate mofetil, may cause PRCA; mycophenolate mofetil-associated PRCA has been seen in the early period after transplant, and hematologic impro­vement has occurred rapidly after cessation of mycophenolate mofetil.4,5 In our patient, mycop­henolate mofetil had been already stopped in response to neutropenia and thrombocytopenia approximately 1 month before anemia developed.

Tacrolimus, which inhibits T-cell development and proliferation by decreasing production of interleukin 2, is widely used as an immunosup­pressive agent in solid-organ transplant procedures without significant myelosuppression effect. However, several tacrolimus-related PRCA cases have been reported in the literature.6-9 Although the mechanism by which tacrolimus may cause PRCA is still unknown, some reports have stated that tacrolimus stimulates transforming growth factor β1 hyperexpression in mammalian cells; in addition, increased transforming growth factor β1 inhibits hematopoiesis and controls erythroid serial differentiation.10,11 Conversely, tacrolimus has also been reported to be an alternative treatment option for PRCA.12 However, there are other possible treatment options for PRCA, such as corticosteroids, cyclosporine, alkylating agents, antithymocyte globulin, alemtuzumab, and intravenous immu­noglobulin; for example, the response rate in patients treated with cyclosporine (12 mg/kg/day) is 65% to 87%.13

Patil and colleagues reported results for 3 renal transplant cases in which tacrolimus was replaced with cyclosporine. For each case, patients improved completely within 4 months, and none of the patients required blood transfusions after stopping tacrolimus.8

In our patient, after we excluded other causes of PRCA such as infections (parvovirus B19), lymphoproliferative diseases, autoimmune disorders, and solid-organ tumors (thymoma), we considered a drug-associated cause for PRCA. Although the blood level of tacrolimus was generally in the normal range, we considered this as a possible causative agent for PRCA. After the switch from tacrolimus to cyclosporine, the patient responded to therapy dramatically, and with the cyclosporine treatment his hemoglobin remained in the normal range.

The improvement of anemia after withdrawal of tacrolimus supports the possible etiological role of tacrolimus in PRCA. Alternatively, cyclosporine is also a treatment option for PRCA. Therefore, it is difficult to discern whether the clinical improvement was related to the cessation of tacrolimus or, rather, to a therapeutic effect of cyclosporine.

The evaluation of anemia in renal transplant patients can be a challenging issue that requires careful consideration on multiple etiologies. Mild-to-moderate anemia may occur as a result of infections, drugs, or impaired graft function in patients after solid-organ transplant; however, if transfusion-dependent severe anemia with reticulocytopenia is evident during the posttransplant period, then PRCA should be considered (especially drug-associated PRCA). Furthermore, early diagnosis of PRCA, which generally requires multiple blood transfusions for the patient, is important because an increased number of blood transfusions can cause immuno­genic effects and increased risk for allograft survival. Tacrolimus is a prominent drug that is suspected to cause PRCA during the posttransplant period (as in our patient). Clinicians should consider a switch from tacrolimus to another immunosuppressant, as we did. 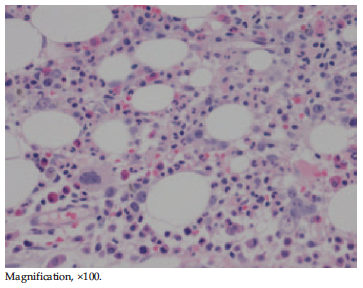 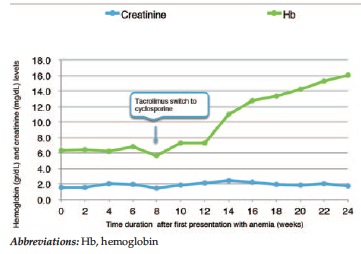 Figure 2. Line Diagram Showing Serum Creatinine and Hemoglobin Levels of the Patient From Date of First Admission to the Hematology Department to the Present Date