Refractory gout can be treated with infusions of pegloticase, which metabolizes uric acid into a product readily excreted in urine. Antidrug antibodies often develop, leading to reduced efficacy and potential infusion reactions. The concomitant administration of immunosuppressive agents has been suggested as a means of mitigating the effects of drug-related immunogenicity, rendering treatment more tolerable, and resulting in better outcomes. This report presents cases of 2 patients with tophaceous gout, each having previously undergone a solid-organ transplant, each taking immunosuppressants to prevent organ rejection, and each successfully treated with pegloticase. Although data from randomized controlled studies are needed, these cases suggest that it may be beneficial to coadminister an immunosuppressive medication to extend drug persistence with pegloticase in the management of refractory gout. This approach could allow patients to receive long-term treatment, resulting in improved patient outcomes.

Pegloticase, approved for management of treatment-refractory gout, incorporates mammalian recombinant uricase conjugated to polyethylene glycol.2 This allows uric acid to be excreted as allantoin, leading to robust declines in SU. Polyethylene glycol conjugation increases solubility and half-life and decreases drug immunogenicity.2 In phase 3 trials, the vast majority of patients initially experienced significant decreases in plasma uric acid levels. However, only 42% of patients were considered responders and achieved levels consistently below 6.0 mg/dL throughout months 3 and 6 of treatment.1 Although both the responders and nonresponders in the study who received pegloticase (8 mg intra-venously [IV] biweekly) initially achieved low plasma uric acid levels, after week 10 the mean levels of eventual nonresponders were consistently >6.0 mg/dL.1

Concurrent administration of immunosuppres-sants to limit formation of antidrug antibodies may limit the reduction of pegloticase’s immunogenicity, as previously demonstrated for other biologic medications. For example, infliximab use has been limited by the formation of antidrug antibodies,3 and, as with pegloticase, resultant antibodies have been associated with both efficacy loss and infusion reactions. Coadministration of an immunosup-pressant with infliximab, most often methotrexate or azathioprine, improves treatment persistence.3 Similarly, coadministration of immunosuppressants with pegloticase may preserve its urate-lowering ability, as observed in the patients reported in this study.

The addition of immunosuppressants to peglot-icase in gout treatment is a strategy that has been deployed effectively in limited reports. In a proof-of-concept case series, 10 patients with refractory gout were treated with pegloticase biweekly for at least 5 months.4 Patients were concurrently administered folic acid and methotrexate. All patients tolerated complete courses, maintained target SU levels, and had no infusion-related reactions.4 Similarly, at the time of data extraction in a retrospective chart review, of 10 patients with gout who were treated with pegloticase and concomitant methotrexate, 5 were complete responders, 3 were “still succeeding” on treatment, and only 2 ended treatment.5

When azathioprine was used concomitantly with pegloticase, a patient’s gout was successfully treated with 98 weeks of pegloticase infusions.6 This patient experienced decreased tophi size, SU levels, and flares in addition to no infusion-related reactions. During 2 periods of noncompliance with azathioprine, the patient experienced temporary SU increases that declined once treatment was reestablished,6 illustrating the possibility that immunosuppression could prevent formation of anti-pegloticase antibodies and possibly even “recapture” treatment response after their formation.

Limited research is available on the relationship between pegloticase and immunosuppressants in the context of solid-organ transplantation. A recent case report presented a heart transplant patient using immunosuppressants while undergoing pegloticase treatment for tophaceous gout.7 After the first infusion, the patient’s SU levels decreased to 1.5 mg/dL and remained steady throughout her 38-week treatment. She experienced tophi resolution, no gout flares, and improvements in her mobility, pain, and overall quality of life.7 In another study, 9 of 20 (45%) gout patients treated with pegloticase without concomitant immunosuppression developed antidrug antibodies. In contrast, only 1 of 7 (14%) organ transplant patients on immunosuppressants treated with pegloticase developed antidrug antibodies.8

We present cases of 2 patients with treatment-refractory gout who experienced marked and sustained reductions in SU and favorable outcomes with pegloticase. Notably, each had a history of kidney transplant and received immunosup-pressants throughout their gout treatment. Coupled with emerging data, the outcomes of these cases suggest that coadministration of immunosup-pressant therapy with pegloticase may hinder the formation of antidrug antibodies, allowing for improved treatment persistence and optimization of patient outcomes.

Case 1
A 55-year-old man presented for evaluation and management of severe gout. He developed immunoglobulin A nephropathy in his twenties and experienced gout flares as his kidney function worsened but was not treated with urate-lowering therapy. The patient had received a kidney transplant from a living related donor (brother) at age 36 years. Immunosuppressive medications posttransplant included mycophenolate mofetil 1 g and tacrolimus 0.5 mg twice daily and prednisone 5 mg daily. He experienced no further flares, but several tophi gradually formed over his knees, elbows, and hands (Figure 1A). At the time of evaluation, 19 years posttransplant, he had an SU level of >10 mg/dL and was treated unsuccessfully with increasing doses of daily allopurinol (gradually titrated from 100 to 300 mg daily). Given the tophaceous burden posed, the decision was made to switch to pegloticase 8 mg IV biweekly rather than to initiate or add another oral urate-lowering agent. The patient experienced a severe flare immediately after the first infusion, which was treated with a prednisone burst and taper. He had no further flares, his SU level remained <1.5 mg/dL throughout therapy (Figure 2), and he reported improved pain and well-being (Figure 3A). Tophi were considerably reduced in size after 6 months of treatment and resolved after 12 to 14 months (Figure 1B). After 40 infusions across 18 months, pegloticase was discontinued and the patient transitioned back to allopurinol (150 mg/day). After an SU con-centration increase, his allopurinol dose was increased (300 mg/day) (Figure 2). Nearly 2 years after treatment, the patient has not experienced recurrences of tophi or gout flares, and his SU level has consistently remained below target threshold of 6.0 mg/dL.

Case 2
A 51-year-old woman sought rheumatologic evaluation for polyarthralgias, myalgias, and intermittent joint swelling. She had a history of “suspected gout,” although this was unconfirmed via synovial fluid analysis. The patient had a history of polycystic kidney disease with progressive renal failure and underwent a deceased donor kidney transplant at age 46 years. Initial immunosup-pressive medications included sirolimus and tacrolimus, but azathioprine replaced sirolimus after the patient had adverse effects. After the patient developed acute arthritis of the knee, arthrocentesis revealed MSU crystals. She was treated with intra-articular corticosteroids but declined urate-lowering therapy, partly because of the perceived risk of drug interaction with azathioprine and her reluctance to switch her immunosuppressive regimen. The patient later presented with mid and forefoot swelling suggestive of arthritis and newly developed tophi on several toes. Given her tophaceous burden and hesitancy to change immunosuppressive agents, she was treated with pegloticase 8 mg IV biweekly while continuing tacrolimus and azathioprine. She experienced a severe flare after the first infusion but otherwise tolerated treatment well and reported improved pain and well-being (Figure 3B). Tophi resolved after 4 to 5 months, and pegloticase was discontinued after 15 infusions across 8 months, with SU levels remaining <1.5 mg/dL throughout treatment (Figure 2). She transitioned to allopurinol (100 mg/day), and azathioprine was replaced with everolimus to avoid possible drug-drug interaction. Although this patient has not had a follow-up appointment to assess her SU level posttreatment, she has not indicated experiencing any flares since discontinuing pegloticase and instead postponed appointments, suggesting that her disease activity remains low.

There are at least 2 recent studies that examined the efficacy of coadministering immunosuppressants with pegloticase: The REduCing Immunogenicity to PegloticasE (RECIPE) Study9 and the Study of Pegloticase Plus Methotrexate in Patients with Uncontrolled Gout (MIRROR).10 The phase 2 RECIPE study was a double-blind, placebo-controlled study of 32 adults with chronic refractory gout who were initiated on pegloticase.9 In the 12-week study, patients randomized to receive concomitant mycophenolate mofetil (1000 mg twice daily) were more than twice as likely as those randomized to placebo to achieve a SU level of <6.0 mg/dL (86% vs 40%; P = .01). The open-label MIRROR Study included 14 participants with gout who were initiated on pegloticase. Eleven of 14 patients (78.6%) satisfied the responder definition, which was defined as maintaining SU levels <6 mg/dL for ≥80% of the time during month 6 of treatment with pegloticase and concomitant methotrexate.10 Although these studies did not include solid-organ transplant recipients, the results of these studies are informative.

The potential efficacy and durability of pegloticase with concomitant use of immunosup-pressants are illustrated in the 2 cases that we reported here. Although this strategy appears promising, rigorously designed randomized controlled studies are needed to determine whether immunosuppressants should be routinely prescribed with pegloticase in refractory gout treatment, particularly in high-risk populations such as those with a history of solid-organ transplant. Future studies are necessary to identify the comparative efficacy and safety of different immunosuppressive agents in this context. This point may be particularly relevant as comorbidities that are overrepresented in gout, such as chronic kidney disease or diabetes, could place patients at higher risk of treatment-related adverse events related to immunosup-pressive treatments.

From the 1Division of Rheumatology and Immunology, Department of Internal Medicine, University of Nebraska Medical Center, Omaha, Nebraska; and the 2Department of Medicine, Veterans Affairs Nebraska-Western Iowa Health Care System, Omaha, Nebraska, USA
Acknowledgements: The authors thank Dr. Cynthia Schmidt with the Leon S. McGoogan Health Sciences Library for her assistance with citations and references. Funding for this work was provided by the National Institutes of Health/National Institute on Alcohol Abuse and Alcoholism grant R25AA020818 through the Summer Undergraduate Alcohol Research Program at the University of Nebraska Medical Center. The funders had no role in the design or conduct of this study and no input on the report. Dr. Mikuls has received research funding from and has served as an advisor to Horizon Therapeutics. *Anna Kilzer and Lauren Klingemann contributed equally to this work.
Corresponding author: Michael Feely, Division of Rheumatology and Immunology, Department of Internal Medicine, 986270 Nebraska Medical Center, Omaha, NE 68198-6270, USA
Phone: +1 402 559 7288
E-mail: mfeely@unmc.edu

Figure 1. Patient 1 Before and After Administration of Pegloticase 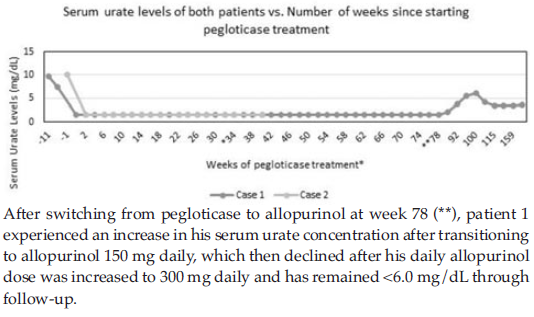 Figure 2. Rapid Decline in Serum Urate Levels After Pegloticase Treatment in Both Patients 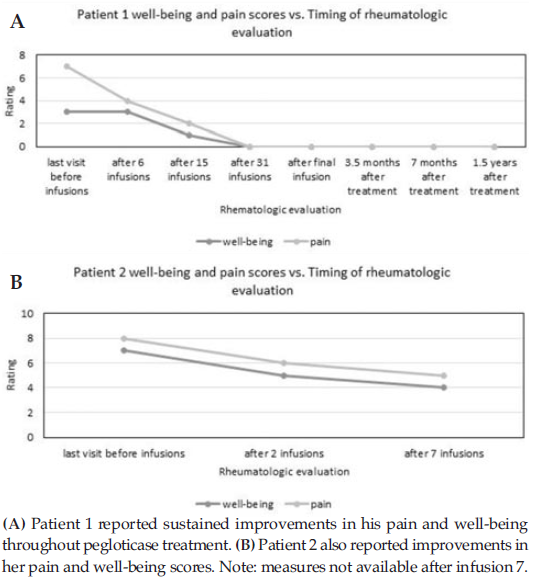 Figure 3. Well-Being and Pain Scores Over Time in Patients 1 and 2