Objectives: Inosine triphosphate pyrophosphatase is an enzyme encoded by the ITPA gene and functions to prevent the incorporation of thiopurine nucleotides into DNA and RNA. Thiopurine drug metabolites such as azathioprine and 6-mercaptopurine have been included in the lists of inosine triphosphate pyrop-hosphatase substrates. Inosine triphosphatase gene alterations are other pharmacogenetic sequence variants possibly involved in thiopurine metabolism. This study aimed to evaluate the possible association between ITPA 94C>A gene sequence variant (C-to-A substitution at nucleotide 94) in liver transplant recipients.
Materials and Methods: The genotyping of ITPA 94C>A was evaluated by the polymerase chain reaction-restriction fragment length polymorphism method
in 200 liver transplant recipients as well as 100 controls. Data were analyzed with SPSS statistical software.
Results: This study showed statistically significant associations between the CA genotype of the ITPA 94C>A sequence variant and liver transplant in the rejection and nonrejection groups. Moreover, the results reported in this study showed no significant differences between sex, age, and blood group in patients with liver transplant (with or without transplant rejection).
Conclusions: Our results indicated that there were statistically significant associations of the CA genotype of ITPA 94C>A sequence variant with liver transplant in the rejection and nonrejection groups. Further studies are recommended.

The orthotopic liver transplant is the final therapeutic procedure for end-stage liver failure. Despite the use of new immunosuppressive drugs and new methods, acute rejection is one of the main obstacles after liver transplant. Although patient survival has increased to 80% at 1 year posttransplant, incidence of acute liver rejection remains at 40% to 80%.1,2 Acute liver rejection is an immune process in which lymphocytes play a major role. Immunosuppressor drugs such as azathioprine inhibit purine synthesis. Purines are needed to produce DNA and RNA. When purine synthesis is inhibited, less DNA and RNA are produced for the synthesis of white blood cells, thus causing immunosuppression. Azathioprine, a prodrug of 6-mercaptopurine, in combination with tacrolimus and prednisolone is the standard immunosuppression regimen after liver transplant.3 Thiopurines are widely used in the treatment of diseases such as leukemia, inflammatory bowel disease, and severe rheumatic diseases and especially for immunosuppression following solid-organ transplant.4

An important enzyme in thiopurine metabolism is thiopurine S-methyltransferase, which determines the balance between 2 groups of active metabolites of potentially hepatic 6-methylmercaptopurine ribonucleotides and 6-thioguanine nucleotides of myelosuppressors.5,6 Another enzyme is inosine triphosphate pyrophosphatase (ITPAse), a deficiency of which is associated with thiopurine toxicity. During thiopurine nucleotide synthesis in cells, pyrophospho-hydrolysis of inosine triphosphate (ITP) is converted to inosine monophosphate (IMP) by the enzyme ITPAse, which causes ITP to accumulate abnormally.7,8

The putative role of ITPAse is to recycle purines trapped in the form of ITP and thus to protect the cell from the accumulation of “rogue” nucleotides, such as ITP, dITP, or xanthosine triphosphate, which may be deoxy forms of RNA or DNA.9 Deficiency of ITPAse is a common inherited condition charac-terized by the abnormal accumulation of ITP in red blood cells. There are pharmacogenomic implications with ITPAse deficiency, and the possibility has been raised that metabolism of 6-mercaptopurine (azathioprine) in ITPAse deficiency may lead to thiopurine drug toxicity in affected patients.10

The ITPAse coding gene is on the short arm of chromosome 20, and 5 single-nucleotide variants of this gene have been identified so far, 2 of which are associated with ITPAse loss of activity: 94C>A (C-to-A substitution at nucleotide 94) in exon 2, and IVS2+21A>C.11 Three of the altered sequence variants are silent variants (138G>A, 561G>A, and 708G>A).9 The most common single-nucleotide variant is 94C>A. Previous studies have shown that there is a significant relationship between ITPA 94C>A and the occurrence of adverse side effects such as flu-like symptoms, skin rashes, and pancreatitis in patients treated with thiopurine.12-14 In extensive studies, the frequency of ITPA 94C>A has been investigated in different populations. In a study conducted on a group of White participants, it was shown that 2 ITPA gene sequence variants (94C>A and IVS2+21A>C) were associated with reduction of ITPAse enzyme activity.15

In normal cells, ITP is formed by phosphorylation of IMP, and ITPAse converts ITP back to IMP to prevent accumulation of ITP. Deficiency of ITPAse interrupts this futile cycle and leads to the accumulation of ITP.7,12 In the past, evidence has been published that sequence variations in the gene encoding ITPAse may be associated with the occurrence of adverse drug reactions in patients treated with thiopurines.16 Our study aimed to evaluate the possible association between the ITPA 94C>A gene sequence variant and liver transplant rejection in Iranian liver transplant recipients.

Patient information
Our study included 100 healthy participants and 200 recipients of liver transplants between 2011 and 2016. The transplant recipients (n = 200) were divided into 2 groups. The first group, without rejection (nonrejection group), consisted of 100 patients, and the second group was composed of 100 patients who had experienced rejection (rejection group). The patients were enrolled in the study according to the following inclusion criteria: the recipients had received a liver transplant from a deceased donor, and the recipients were treated with specific immunosuppressive drug regimens.17

Donors were selected on the basis of ABO blood group compatibility. Human leukocyte antigen matching was done as part of the standard work-up for liver transplant patients at this center. Rejection episodes were identified by an expert gastro-enterology team according to accepted criteria such as increased serum levels of liver enzymes and total serum bilirubin level in the absence of biliary problems, histological findings after biopsy of the liver, and clinical and biochemical responses to high-dose steroids.

The ethics committee of Shiraz University of Medical Sciences approved the protocol, and written informed consent was obtained from all the participants. The study was conducted according to the Declaration of Helsinki. According to the rules of the transplant ward of Namazi Hospital, all transplant recipients received organs from deceased donors. Human leukocyte antigen typing and ABO blood compatibility were performed for all liver transplant patients.

DNA extraction
Blood samples (3 mL, treated with EDTA) were collected from each participant. The serum and buffy coat from each sample were separated using a Ficoll gradient (Nycomed). Genomic DNA was extracted from the buffy coat using a commercial extraction kit (DNG Plus DNA extraction kit, CinnaGen) according to the manufacturer’s instructions.

Genotype analysis
The single-nucleotide variation of the study gene (ITPA) was evaluated by polymerase chain reaction-restriction fragment length polymorphism methods, using a thermal cycler (Techne Genius), as previously described.18 The polymerase chain reaction products were analyzed by electrophoresis in 3% agarose gel stained with safe stain, and final detection was performed with an ultraviolet transilluminator. Details of primer, fragment size, and restriction enzyme are summarized in Table 1.

Statistical analyses
All statistical analyses were performed with SPSS software (version 16). The t test was used to compare continuous variables. In addition, the Pearson chi-square test or Fisher exact test was used to compare between-group differences in clinical findings and allele and genotype frequencies with and without acute rejection episodes. P < .05 was considered statistically significant. Odds ratios and 95% confidence intervals were calculated to estimate the risk of rejection.

The evaluation of the association of gene sequence variants, transplant patients, and underlying diseases revealed that there was a significant association with underlying disease type (autoimmune hepatitis and viral hepatitis [HBV + HCV + HBV, and hepatocellular carcinoma]) in liver transplant patients (with or without transplant rejection) (Table 3). Also, the results revealed no significant differences in sex, age, and blood type in patients with liver transplant (with or without transplant rejection).

Inosine triphosphate pyrophosphatase is an enzyme that prevents nonconventional purine nucleotides from joining DNA and RNA and is encoded by the ITPA gene. In various tissues, such as bone marrow, skin, fibroblasts, amniotic fluid, and red blood cells, the activity of ITPA gene variants has been investigated. The sequence variations that have been identified to be associated with ITPAse deficiency are ITPA 94C>A and IVS2+21A>C.19,20 Marsh and colleagues studied the distribution of ITPA c.94C>A and stated that an association with the inosine triphosphate pyrophosphatase gene (ITPA) and azathioprine and 6-mercaptopurine intolerance has been defined. However, the allele frequency of ITPA c.94C>A varies dramatically between populations, being lowest in Central American and South American populations (1%-2%) and highest in Asian populations (11%-19%). In White, African American, and African populations, the allele frequency is 5% to 7%.20,21 Previous studies revealed a significant relevance between ITPA 94C>A and the onset of noxious reactions such as flu-like symptoms, rash, and pancreatitis in patients treated with a thiopurine. Patients with the ITPA 94C>A variant are also known to experience significantly earlier onset of noxious reactions compared with patients who do not have the ITPA 94C>A variant.22

Our study showed statistically significant correlation between the CA genotype of the ITPA 94C>A sequence variant and liver transplant in the rejection and nonrejection groups (P = .04). Also, a meaningful association was observed between this sequence variant and allelic frequency in the liver rejection group and the control group (P = .02). Furthermore, the results reported in this study indicate no significant differences between sex, age, and blood group in patients with liver transplant (with or without transplant rejection).

In 2009, the prevalence of the ITPA gene in Asian populations was estimated to be 14% to 19%, which is the highest prevalence among the total 5% of global inhabitants that possess the ITPA c.94C>A variation.20 Several other types of gene sequence variants with clinical manifestations have been observed in the ITPA gene of different populations, and the results of those studies indicated a reduction in the activity of the ITPAse enzyme.23 The ITPA c.94C>A sequence variant is associated with susceptibility to adverse drug reactions in patients treated with azathioprine and is responsible for the deletion of an exonic splicing silencer in exon 2 in peripheral blood leukocytes of these patients, which may eventually lead to a change in the structure of the ITPAse and contribute to its deficiency (the ITPA c.94C>A and c.124+21A>C [g.IVS2+21A>C] sequence variants cause a misplacement of the ITPA gene).11 In adult patients with hematological malignancy, the ITPA 94C>A variant has been reported to be connected to a notable surge in the total heteroplastic/homoplastic alterations in the mitochondrial DNA, which suggests that a reduction in the activity of the ITPAse may cause incremental changes in the mitochondrial ITPA gene expression and suggests a possible connection with mitochondrial DNA defects.23 Moreover, an ITPA genotyping study in one-quarter of the Tunisian population showed that gene sequence variants in that population had reduced the metabolic function of the enzyme.24

This study of the ITPA 94C>A sequence variant in transplant patients with and without rejection is the first study of its kind, to our knowledge, in Iran. Therefore, we cannot compare our results with other results.

In conclusion, the ITPA 94C>A variant is an important factor in liver transplant recipients treated with thiopurine drugs. This study was performed on a few patients and controls. According to our research, this is the first report on the association between liver graft rejection and ITPA single-nucleotide variations; therefore, further studies are required to confirm and extend our results.

Table 2. Distribution of rs1127354 Genotype and Allele in Rejection, Nonrejection, and Control Groups 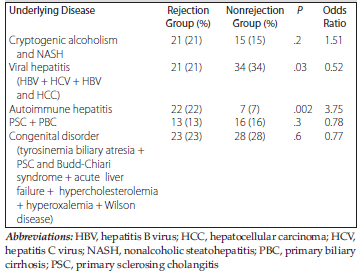 Table 3. Underlying Diseases in Recipients with Rejection and Nonrejection