Hungry bone syndrome is a rare but potentially lethal complication that is characterized by rapid, severe, long-lasting hypocalcemia and hypophosphatemia secondary to increased bone metabolism. We present a case of hungry bone syndrome after living donor liver transplant for biliary atresia. Following a failed Kasai procedure for biliary atresia, a 5-month-old boy underwent living donor liver transplant with reduced left lateral lobe from his father. Despite the oral administration of alfacalcidol, the patient exhibited severe craniotabes before the surgery. He developed severe hypocalcemia and hypophosphatemia im­mediately after liver transplant and required supplementation of calcium and phosphorus for 1 month thereafter. After serum levels of calcium and phosphate had normalized, there was a rapid increase in the serum bone-type alkaline phosphatase level, and the craniotabes subsided remarkably. To our knowledge, this is the world’s first reported case of hungry bone syndrome after liver transplant for cholestatic cirrhosis. It underscores the importance of strict nutritional and electrolyte management in the perioperative period. A prompt diagnosis and correction of hungry bone syndrome are imperative to prevent the associated significant morbidity and mortality.

Osteodystrophy is a known complication of advanced chronic liver disease. Furthermore, patients with biliary atresia (BA) are at an increased risk of osteoporosis, osteomalacia, and bone fracture due to malabsorption of vitamin D and poor hepatic 25-hydroxylation.1 A recent study showed that low 25-hydroxyvitamin D (OHVD) levels persist even after a Kasai operation, especially in cases of persistent jaundice, despite routine parenteral and enteral supplementation.2 The primary function of 25-OHVD is to maintain calcium and skeletal homeostasis, but there are also extraskeletal, immunomodulatory, and metabolic effects. Hypocalcemia induced by vitamin D deficiency results in secondary hyperparathyroidism (PHP). As a result, overproduced parathyroid hormone (PTH) enhances bone resorption into the blood and acts on the kidneys to suppress phosphorus reabsorption and promote calcium reabsorption.

Hungry bone syndrome (HBS) is a rare condition presenting with rapid, profound, and prolonged hypocalcemia and hypophosphatemia associated with increased bone metabolism.3 It has been reported as a potentially lethal complication in patients undergoing parathyroidectomy for primary PHP or secondary PHP induced by long-term dialysis.3,4 The mechanisms leading to severe hypocalcemia include a rapid increase in calcium use by bone accompanying PTH removal and cessation of bone resorption.

Few studies have reported the development of HBS after organ transplant.5,6 We present the world’s first reported case of HBS after living donor liver transplantation (LDLT) for BA.

A 5-month-old boy who had undergone a Kasai operation for BA presented with severe jaundice and repeated episodes of cholangitis. Despite the oral administration of alfacalcidol (0.25 μg/day), the patient exhibited severe craniotabes. Although his serum calcium, magnesium, and phosphorus levels were normal (9.7, 2.2, and 2.8 mg/dL, respectively), chest radiography showed rachitic rosary and fraying of the humeral head, suggesting the presence of rickets (Figure 1). The serum total bilirubin level increased to 22.4 mg/dL, and he also developed abdominal distension associated with ascites. Because of the progression of cholestatic cirrhosis, the patient underwent LDLT with a reduced left lateral section graft from his father (graft weight: 190 g, graft-to-recipient weight ratio: 2.84%). The operative time was 599 minutes, and the amount of blood loss was 547 g. Triple immunosuppression composed of tacrolimus, steroids, and mycophenolate mofetil was initiated according to our institutional protocol.7 The pathological findings showed the complete absence of bile ducts at the perihilar area with only a trace of intrahepatic bile ducts.

Intravenous infusion of calcium gluconate hydrate (510 mg/day) was continued from the day after transplant. However, the serum albumin-adjusted calcium level gradually decreased to 7.4 mg/dL on postoperative day (POD) 13 (Figure 2a). Thus, the oral administration of alfacalcidol (0.5 μg/day) and calcium lactate hydrate (100 mg/kg/day) was added from POD 14. Similarly, on the second day after transplant, the serum phosphorus level dropped remarkably to 1.1 mg/dL, and intravenous drip infusion of sodium phosphate (155 mg/day) was started (Figure 2a). The serum phosphorus level was poorly controlled, and the sodium phosphate dose was increased to 350 mg/day. An oral sodium dihydrogen phosphate preparation (70 mg/kg/day) was further added from POD 14. The postoperative urinary excretion of calcium and phosphorus was not increased but rather suppressed (urinary calcium: 46.8 mg/day [normal range, 100-300 mg/day], urinary phosphate: 204.4 mg/day [normal range, 500-2000 mg/day] on POD 5). The serum calcium and phosphate levels eventually recovered to the normal range, with significant clinical improvement of craniotabes. Intravenous and oral supplementations were terminated at POD 27 and 30, respectively. The recipient demonstrated excellent liver graft function throughout the postoperative period and was discharged on POD 38.

The alkaline phosphatase (ALP) value increased dramatically following the recovery of serum levels of calcium, phosphate, and magnesium (Figure 2a). Testing of ALP isozyme at POD 42 showed that bone-type ALP3 accounted for >80% of total ALP (Figure 2b). The patient has been doing well in the 10 months since LDLT, and his craniotabes have markedly improved. Furthermore, chest radiography has shown improved findings of rachitic rosary and fraying of the humeral head. The serum calcium and phosphate levels remain in the normal range without any supplementation required, and the ALP level has decreased to around 1500 U/L.

To our knowledge, this is the first reported case of HBS after liver transplant (LT) for cholestatic cirrhosis. Our prompt recognition and correction of the underlying pathophysiology resulted in an uneventful and complete recovery.

The overall mortality of BA has decreased dramatically in the past half century because of efforts such as the introduction of the Kasai operation and the technical development of LT.8 Fat-soluble vitamin deficiencies are still common in patients with cholestasis, including BA, and several studies have shown that severe cholestasis with increased bilirubin levels is associated with vitamin D deficiency.2,9,10 Similarly, Chongsrisawat and associates11 showed that patients who had BA with jaundice had a lower bone mineral density as well as lower 25-OHVD levels than patients who had BA without jaundice. Liver transplant is an effective method for improving the hepatic function and fat-soluble vitamin absorption disorders and osteodystrophy,12 but preoperative strict nutritional management is also important for ensuring a stable postoperative recovery. The present patient had already shown signs of severe rickets just before LDLT despite routine oral supplementation of alfacalcidol; therefore, more effective vitamin administration should have been performed via the intravenous route. Alternatively, oral absorbable fat-soluble vitamin formulation might have been useful.9

The term HBS was originally coined to describe profound (serum calcium <8.4 mg/dL) and prolonged (beyond the fourth day after surgery) hypocalcemia that follows parathyroidectomy for PHP.3 The pathogenesis of postoperative severe hypocalcemia has been described as removal of the effects of high circulating PTH levels on bone, by which process the reversal of the balance between bone resorption and formation occurs. Reported risk factors for the development of HBS include an older age; increased levels of serum calcium, PTH, or ALP; an increased weight of the resected parathyroid glands; PHP-related bone disease; and a depleted vitamin D status.3

Of note, Rolighed and colleagues13 showed that daily supplementation with high doses of vitamin D improved the vitamin D status and reduced the PTH levels in patients with PHP, which resulted in an improved bone mineral density before parathy­roidectomy. Although our case lacks pretransplant data, such as data on PTH level and other vitamin D-related parameters, vitamin D deficiency associated with the primary disease was strongly suspected clinically, suggesting that posttransplant HBS was caused by improved vitamin D absorption capacity and rapid bone formation after LDLT. Moreover, the patient had a vitamin D deficiency during the growing period of infancy, so it would have been more severe than the osteoporosis seen in patients with severe cholestasis.

Phosphorus may be a substance involved in liver regeneration.14 In this case, because the weight of the graft was sufficient (optimal range at our facility: 0.7% ≤ graft-to-recipient weight ratio < 5%), it is unlikely that liver regeneration proceeded so rapidly, but it should be noted as one of the causes of hypophosphatemia. Additionally, glucocorticoid is known to reduce the absorption of calcium in the intestine and kidney.15 Although we confirmed that there was no significant correlation between ALP values, which is an indicator of osteogenic activity, and prednisone dose after LDLT, it is possible that the use of steroids has influenced the etiology of HBS.

The early diagnosis allowed for treatment to be performed without serious complications. It is paramount to recognize that LT recipients with severe cholestatic liver disease are vulnerable to HBS. If left untreated, severe HBS may result in significant morbidity related to hypocalcemia, including seizures, cardiac arrhythmias, and congestive heart failure, leading to death.4 Further multicenter studies are needed to better understand the incidence and prognoses of this underexplored, rare complication after LT.

The present case suggests that the restoration of bile excretion after LT may result in HBS, particularly in severe cholestatic liver disease. Strict nutritional and electrolyte perioperative management is imperative to avoid the associated significant morbidity and mortality. 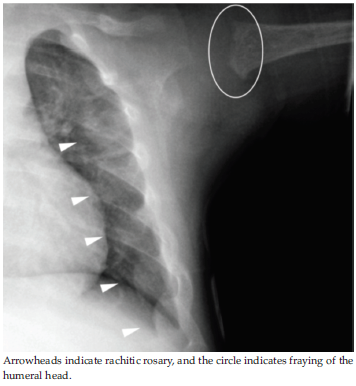 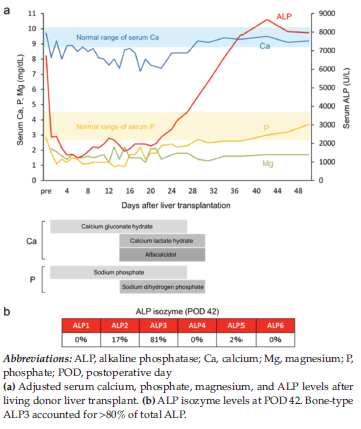