Calciphylaxis is a rare disease characterized by calcification of small- to medium-sized blood vessels in the dermis and subcutaneous fat, resulting in cutaneous necrosis. Although most commonly shown in patients with end-stage kidney disease, it has also been reported in patients with other diseases, including alcoholic cirrhosis and malignancies. Here, we report an unusual case of calciphylaxis in an orthotopic liver transplant recipient with acute kidney injury. The patient, a 43-year-old white female with a history of type 2 diabetes mellitus, alcoholic cirrhosis, and normal kidney function, presented with decompensated liver disease and hepatorenal syndrome; she no longer responded to medical treatment and required treatment with dialysis. Ten days after admission, she underwent liver transplant, resulting in improved liver function tests. She had acute tubular necrosis (creatinine peak: 325 µmol/L) from sustained hypotension during and after surgery, which required 4 sessions of dialysis over 2weeks. Six weeks after her transplant, she developed painful, nonulcerating, erythematous plaques over her shins and thighs. Skin biopsy of the lesions showed calciphylaxis, calcium deposits, and thrombotic vasculopathy. She also developed severe hypercalcemia (calcium level of 2.75 mmol/L) from immobility, which required treatment with a bisphosphonate and hemodialysis. The lesions improved 6 weeks later, and her renal function returned to normal. Calciphylaxis diagnosed in an orthotopic liver transplant recipient with acute kidney injury has not been previously reported. We hypothesize that her chronic inflam­matory state caused down-regulation and low levels of fetuin A and protein C. She also had other risk factors, including hypoalbuminemia, obesity, systemic glucocorticoids, and alcoholic liver disease. Calciphylaxis can occur in patients with alcoholic cirrhosis and acute renal failure even after liver transplant. Further studies into the pathogenesis of this disease may help us understand why it develops in these patients and not others with the same risk factors.

Calciphylaxis or calcific uremic arteriolopathy (CUA) is a rare disease characterized by medial calcification of arteries and arterioles, as well as by intimal proliferation and fibrosis.1 Lesions usually occur in the lower limbs but may also occur elsewhere in the body.2 Patients most affected have end-stage renal disease because the pathophysiology involves abnormal mineral metabolism, including hyperphosphatemia, secondary hyperparathyroidism, and vitamin D therapy.3 However, there have been a few reports of calciphylaxis occurring in nondialysis patients in the setting of alcoholic cirrhosis, connective tissue disorders, primary hyperparathyroidism, and auto­immune diseases.2,4 Calciphylaxis has a poor prognosis and may be fatal.

A 43-year-old white female with a history of type 2 diabetes mellitus (HbA1c of 7.5%), alcoholic cirrhosis, and normal kidney function presented with decompensated liver disease and hepatorenal syndrome that no longer responded to treatment with albumin, octreotide, and midodrine and required continuous renal replacement therapy. She received a liver transplant 10 days after admission, resulting in improved liver function tests. Her medications were acyclovir, fluconazole, folic acid, subcutaneous heparin, insulin, mycophenolate mofetil, pantoprazole, prednisone 15 mg daily, sulfamethoxazole/trimethoprim, and tacrolimus. She was not on calcium or vitamin D supplements. She developed oliguric acute tubular necrosis, with a peak creatinine level of 325 μmol/L from hypotension during and after surgery, which required 4 sessions of dialysis over 2 weeks. The diagnosis was made clinically; a renal biopsy could not be performed because the patient was unstable and her platelets were low. Her kidney ultrasonography results were normal. Her serum creatinine stabilized at 220 μmol/L, and she did not require additional dialysis.

Six weeks after liver transplant, the patient complained of bilateral lower extremity pain. Venous ultrasonography did not show deep venous thrombosis. Firm, tender, erythematous, nonulcerated skin lesions with eschars developed over her medial shins, left thigh, and lateral right thigh (Figure 1). One week later, the skin lesions worsened despite local wound care. A skin biopsy revealed calciphylaxis by the appearance of small thrombosed vessels, small fine granules, and larger coarse deposits of calcium in both intima and media of arterioles and capillaries (Figure 2). She was not on warfarin or iron supplements at any time. Tests for antinuclear antibodies were negative.

The patient was also hypoalbuminemic and hypercalcemic with normal phosphorus levels (Table 1). Her intact parathyroid hormone level was within the normal range (7.3 pmol/L), and her parathyroid scan was negative. She was treated with 3 doses of a bisphosphonate. Her calciphylaxis was treated with sodium thiosulfate, dialysis, and local aggressive wound care. The patient developed septic shock due to Pseudomonas species infection that required intubation. No cytomegalovirus or fungal infections were detected. The lesions improved 6 weeks after diagnosis (Figure 3). Her renal function returned to normal range. She was discharged to rehabilitation in stable condition. At 6 months follow-up, her creatinine remained stable at a normal level.

Calciphylaxis is usually diagnosed in patients with end-stage renal disease on maintenance hemodialysis. Intense pain associated with cutaneous lesions and palpation of firm, calcified subcutaneous tissue are suggestive of calciphylaxis. Definitive diagnosis requires a skin biopsy, which should be performed whenever the calciphylaxis diagnosis is considered.4 Noninvasive imaging tools (eg, plain radiography, nuclear bone scans) may aid in the diagnosis. However, these methods have not been systematically evaluated and are not recommended for clinical use at this time.4

Patients with alcoholic cirrhosis have relative protein C deficiency, which is one of the risk factors for calciphylaxis. This protein is activated at the surface of endothelial cells when exposed to a complex of thrombin and thrombomodulin. In combination with protein S, protein C will prevent coagulation.3,4 However, in cirrhotic patients, protein C is low, which may lead to a hypercoagulable state favoring calciphylaxis in concomitance with other risk factors.3,5 Fetuin A is produced in the liver and plays a role in preventing diffuse calcification. It is low in cirrhotic patients and may also be a risk factor for calciphylaxis.3 Patients on hemodialysis also have low protein C levels. Poor renal function associated with acute kidney injury also results in low fetuin A levels.3,5

Receptor activator of nuclear factor kappa-Β (RANK) ligand, which is expressed by T cells in osteoblast cells in trabecular bone, binds to RANK to promote the resorptive activity and survival of mature osteoclasts.6 Osteoprotegerin functions as a decoy receptor to prevent RANK and RANK ligand interactions.6 Steroids and liver disease will increase expression of RANK ligand and decrease osteoprotegerin.7 Consequently, bone resorption will increase and will lead to hypercalcemia.6 In addition to these risk factors, diabetes, hypoalbuminemia, hypercalcemia, and steroids may also have contributed to our patient's development of calciphylaxis.

Multiple interventions have been described in the management of calciphylaxis; however, the overall quality of evidence is poor and data mostly come from retrospective cohort studies, case series, and case reports.4 Surgical debridement should be considered on an individual basis. It facilitates wound healing and may also increase survival. However, it may also increase the chances of poor wound healing and infection. Hyperbaric oxygen may be considered in recalcitrant wounds. One study showed that, among 46 patients with CUA, 34 received a full course of hyperbaric oxygen therapy.8 Of these, 58% showed improvement, and more than half had complete healing of wounds. In another series, there was resolution of lesions in 8 of 9 CUA patients treated with hyperbaric oxygen therapy for 90 minutes, with a mean of 40.6 sessions.9 Unfortunately, this treatment was not available at our facility.

Calcium, phosphorus, and intact parathyroid hormone levels should be maintained within normal ranges.4 Cinacalcet is preferred over surgical parathyroidectomy, considering the potential risks of surgical wound infection, hungry bone syndrome, and adynamic bone disease associated with surgical parathyroidectomy. Furthermore, data on survival after surgical parathyroidectomy in calciphylaxis patients are retrospective and inconclusive.4 In all cases of calciphylaxis, excessive suppression of parathyroid hormone, especially below 100 ng/mL, should be avoided.4 Dialysis prescription should be optimized. Intravenous thiosulfate, which is a reducing agent that forms water-soluble complexes with many metals and minerals, is also used. It is administered at 25 g intravenously in 100 mL of normal saline given over the last 30 minutes of each hemodialysis session for a person of 70 kg who is on hemodialysis at 3 times per week.4 The duration of the treatment is usually 3 months, but the optimal duration is unclear.4,10

In summary, the calciphylaxis shown in our patient, a 43-year-old white woman with a history of alcoholic cirrhosis, liver transplant, and acute kidney injury, which developed 6 weeks after transplant, is rare, with no known reports in the literature. The combination of protein C deficiency, low levels of fetuin A, hypoalbuminemia, hypercalcemia, and hyperglycemia may all have played roles in the development of calciphylaxis in our patient. However, more research is required in the pathogenesis and treatment of the disease to better understand why certain patients develop disease and others do not despite common risk factors. 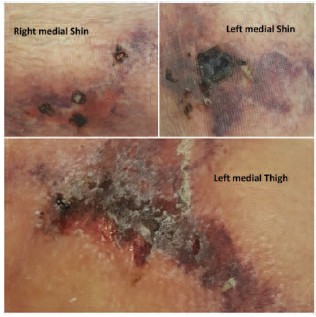 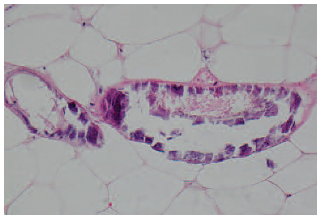 Figure 2. Large Coarse Calcium Deposits in Both Media and Intima of Small Vessels (×60, hematoxylin and eosin) 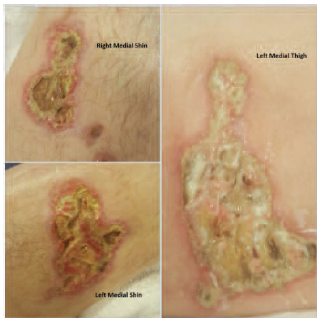 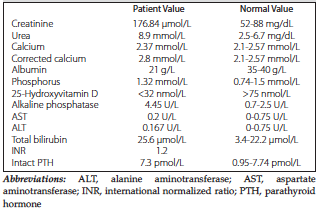 Table 1. Laboratory Results at Time of Diagnosis of Calciphylaxis