Objectives: Large spontaneous splenorenal shunts can result in portal vein steal syndrome and is a risk factor for portal vein thrombosis after orthotopic liver transplant. Disconnection of these shunts by left renal vein ligation has been suggested as a potential technique for improving portal venous flow and mitigating risk of portal vein thrombus, thus improving graft perfusion. We present a series of 6 patients who underwent left renal vein ligation for spontaneous splenorenal shunts and their outcomes.

Materials and Methods: This retrospective analysis included all orthotopic liver transplant recipients who underwent left renal vein ligation for spontaneous splenorenal shunts between 2016 and 2017. Portal venous flow, patency, and renal function were assessed postoperatively. Liver Doppler ultrasonography scans were obtained 1, 3, and 5 days postligation, and serum creatinine was evaluated at 1 and 2 weeks and 1, 3, 6, and 12 months postligation.

In orthotopic liver transplant (OLT), graft function and survival are largely dependent on adequate hepatopetal flow. Portal inflow can be influenced by many factors, including graft size and venous quality, portosystemic system patency, portal vein diameter, portal vein thrombus, and presence of portosystemic shunts.1 Spontaneous splenorenal shunts (SSRS) are common and are present in 20% to 30% of liver transplant candidates.2 These shunts, when large enough, can lead to portal steal phenomenon, which can possibly cause hepatic encephalopathy and portal vein thrombosis (PVT).3

In the setting of SSRS, direct disconnection by left renal vein ligation (LRVL) can suppress portal steal syndrome when the portal vein is patent.4 Despite its potential in mitigating PVT and improving graft function, LRVL is currently not the standard of care at the time of OLT due to concerns for post-LRVL renal dysfunction.5 We present the outcomes of 6 patients who underwent LRVL at the time of or shortly after OLT along with their clinical outcomes.

Ninety-two adults who underwent deceased donor OLT at The Ohio State University Wexner Medical Center from July 2016 to August 2017 were retrospectively reviewed. Six patients (6.5%) underwent LRVL. In 5 patients, SSRS was identified preoperatively by computed tomography or magnetic resonance imaging, and poor venous flow was subjectively confirmed intraoperatively before LRVL. Two patients had known PVT at the time of OLT, which required portal vein thrombectomy with concurrent LRVL at the time of OLT. The sixth patient received a retransplant that was complicated by PVT and underwent portal vein thrombectomy with LRVL 4 days later. Portal vein flow, portal vein patency, and serum creatinine were assessed postoperatively. Liver Doppler ultrasonography results were obtained on postoperative days 1, 3, and 5, and serum creatinine levels were obtained frequently with reported data points at 1 and 2 weeks and at 1, 3, 6, and 12 months post-LRVL.

Mean age of OLT and LRVL recipients was 48.6 ± 12.4 years. Indications for OLT and LRVL along with preoperative Model for End-Stage Liver Disease scores are listed in Table 1. No patients were diagnosed with hepatorenal syndrome before OLT and LRVL. Preoperative portal vein flow assessment was available for all patients. One patient had complete PVT and underwent portal vein thrombectomy and LRVL, which resulted in flow through the portal vein (66 cm/s). Three patients were confirmed to have hepatofugal flow through the main portal vein with resulting hepatopetal flow after OLT and LRVL. Another 2 patients had diminished main PVF of 16 and 32 cm/s, with resulting improvements to 51 and 83 cm/s, respectively, following OLT and LRVL (Table 2). Although no quantitative intraoperative pre- and post-LRVL PVF measurements were obtained, all patients were noted to have subjective improvements in flow intraoperatively with clamping of the left renal vein before ligation.

None of the patients developed postoperative PVT 1 year after OLT and LRVL. Although there were mild and transient elevations in serum creatinine post-LRVL, no patients required dialysis postoperatively or developed clinically significant renal dysfunction after a 1-year follow-up (Figure 1).

The patients presented in this case series underwent OLT and concurrent or delayed LRVL for PVT and/or SSRS identified preoperatively with subjective improvements in main PVF and no clinically significant renal dysfunction at 1-year follow-up. Although LRVL has been reported to be effective in controlling SSRS and improving hepatofugal flow, indications and safety remain unclear. Routine ligation of large portosystemic collaterals with living-donor liver transplant (LDLT) has been recom-mended to avoid risks of portal steal and graft hypoperfusion, which can be common with small-size grafts.6 Portal steal was previously not regarded as a major problem in the pathogenesis of early graft dysfunction after deceased-donor liver transplant (DDLT) but is now being increasingly recognized. Current reports have demonstrated potential benefits in ligating large collaterals to improve portal perfusion after DDLT, especially in the setting of split-liver transplant, transplant of pediatric grafts into adults, and during episodes of rejection.7,8 Our series provides additional validation to the few reports currently available describing the safety of LRVL in the setting of SSRS as a technique to improve PVF, mitigating risk for PVT and graft hypoperfusion.

Consistent with current reports, our series of LRVL during liver transplant demonstrated its minimal effects on renal function. After LRVL, left renal vein thrombus formation can be seen with venous drainage persistent through the gonadal and lumbar veins (Figure 2). In addition, LRVL is com-monly performed to expedite complex abdominal aortic surgery and has not been shown to cause post-operative acute renal insufficiency.9 Nevertheless, LRVL can pose a significant bleeding risk in technically challenging cases in the setting of large collaterals and should be performed selectively based on intra-operative hemodynamic significance. Adequate hepatic portal inflow should be ensured to prevent both portal hypoperfusion and hyper-perfusion.

No consensus exists for the ideal portal pressure after revascularization of the transplanted graft. Studies by Troisi and associates have shown that normal healthy livers have a portal flow of approximately 90 to 100 mL/100 g/minute.10 Fur-thermore, graft portal flow greater than 250 mL/100 g/minute has been shown to trigger the patho-physiology of small-for-size syndrome in LDLT.11 The criteria for collateral ligation in DDLT are mostly derived from LDLT data, and suggestions have been made to aim for graft portal flows between 100 and 250 mL/100 g/minute.12 Poorer survival rates in patients after DDLT in whom portal flow was < 1 L/minute have been shown.13 Therefore, aggressive ligation of collaterals when graft portal flow is < 1 L/min or when shunt size is greater than 1 cm in diameter has been suggested.14 Lee and associates have proposed the use of intraoperative Doppler ultrasonography to demonstrate portal steal prior to ligation.15 However, flowmetry measurements can be cumbersome and inaccurate, and missing flowmetry information is a major limitation in many current case reports/series, including ours.

Tang and associates have proposed an algorithm for LRVL if SSRS is > 1 cm, if PVT is absent or resectable, if SSRS is away from splenic hilum, and if PVF increases after clamping of the left renal vein.5 Confirming adequate right kidney perfusion and function should be an important consideration as well. Currently, no standardized approach is available to guide transplant surgeons in the management of SSRS identified preoperatively or intraoperatively. Larger prospective studies are needed to identify patients who would most benefit from LRVL in the setting of SSRS and to determine PVF and renal function outcomes.

From the Division of Transplantation, The Ohio State University Wexner Center, Columbus, Ohio, USA
Acknowledgements: The authors received no financial support for the research, authorship, and/or publication of this article. The authors have no conflicts to report relevant to this
work.
Corresponding author: Ashraf El-Hinnawi, Department of Surgery/Division of Transplant Surgery, The Ohio State University Wexner Medical Center, 395 W 12th Ave, Columbus, OH 43210, USA
Phone: +61 42936 724
E-mail: 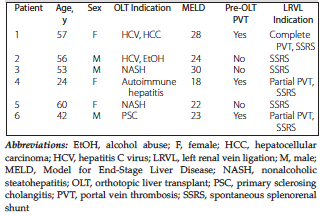 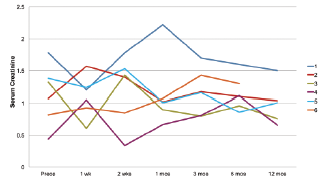 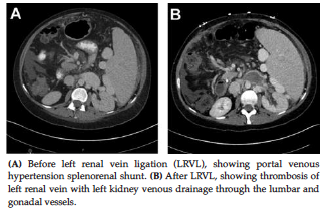 Figure 2. Computed Tomography Images of Abdomen/Pelvis Before and After Left Renal Vein Ligation